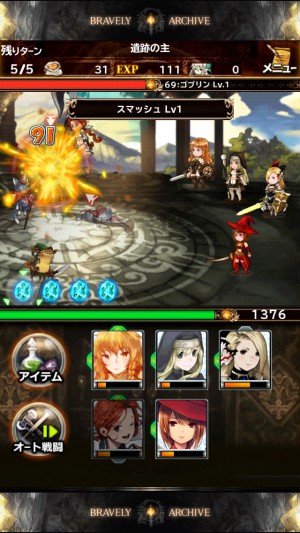 Hey there, fellow mobile gamers! Do you have a Nintendo 3DS to supplement your iOS habit? If so, I sure hope you checked out Square Enix’s Bravely Default last year. It’s one of the most interesting JRPGs I’ve played in quite some time, even if it did sort of overstay its welcome. Well, there’s a sequel coming out in April in Japan for the 3DS that I’d say we’re pretty likely to see in the West sooner or later, and to help drum up excitement, Square Enix has released a free-to-play mobile spin-off. The title of the game is Bravely Archive: D’s Report and it is, of course, a social RPG.

Okay, yes, I would rather have seen a port of the original game, but it’s still selling for a high price on its original platform, so I suspect we’ll have to wait a while longer before there are even whispers of such things. In the meantime, we’ve got this, so let’s make the best of it. The gameplay resembles Brave Frontier to an extent, with your party lined up on one side and the enemy on the other. You can unleash a variety of attacks by touching each character’s portrait and swiping in different directions. Certain combinations of attacks will do extra damage, and once you’ve filled up your special gauge, you can fire off your character’s special move. All the usual social RPG hooks are in here, with stamina meters, calling in friends for support, and a random lottery you can feed premium currency into for a chance at a rare character. While the graphics are simple 2D renderings that try to capture the style of the 3D graphics in the other games, the music is all directly lifted from Bravely Default. It has the desired effect.

The big question is, will this release in English? Square Enix’s track record with bringing over their social RPGs tells me we shouldn’t get too hopeful about this one. That said, with Bravely Default being a hit in the West that surprised even Square Enix themselves, I suppose we can’t rule anything out. I’ve played a bit of the game so far, and to tell the truth, there’s not much separating it from a ton of other social RPGs aside from the Bravely Default IP, but for devoted fans of Ringabell and company, that just might be enough. In the unlikely event that Square Enix opts to release this outside of Japan, we’ll keep you posted.