Satellina ($1.99) tries to apply a minimalist veneer and an arena-survival touch to the speedrun genre, and while its challenges are small in nature, there’s fun to be had here. The goal is to move your X avatar around an arena full of green, yellow, and red particles. The green particles are the ones you must collect, with the yellow and red ones killing you, and forcing you to start the level over. However, those yellow particles turn green once all the green ones are collected, and the red ones turn yellow, and so on. The game is structured with 10 different sets of 5 levels, where you must try to beat the set as quickly as possible. As a completion game, it’s not much, as everything can be tackled through sheer force of will, so this is primarily for speedrun fanatics. There is a clever progression structure where multiple level paths open up as you complete different level sets. 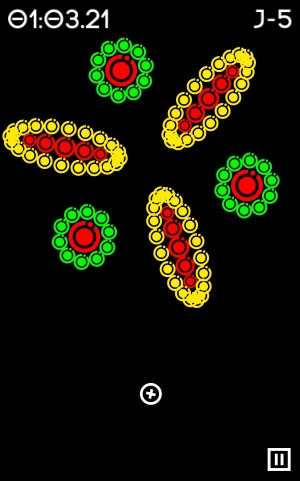 The game commits a cardinal sin when it comes to speedrun games with checkpoints, and that is making it so that if there’s a failure before the very first checkpoint happens, it doesn’t reset the timer. As such, it’s often necessary to just restart from the very first level in a set, which is an annoying sequence of “tap pause then restart" that is definitely a first-world problem, but still aggravating. It also resets the music to the beginning of the track. I shouldn’t have to trade convenience for shorter times, especially when getting shorter times is important to unlock future level sets. Once you beat all ten in under 2:30, you unlock the mode where you go through the entire game in one go, and the green circle victory condition is 15:00 or less. It’s doable, but this is definitely an endurance test of a mode.

I do appreciate that the game has a very consistent set of success conditions: complete a level set in 2:30 or less to unlock two branching paths and get the green circle around the level pack. Complete a set in 5:00 or less to unlock only one and get a yellow circle. Thus, there’s a combination of incentive to do really well, but no punishment for just doing okay. If you get over 5 minutes on a level set, you ought to be doing better.

Really, this is a game of pattern recognition, so playing level sets again and again is key so that you can more easily recognize the complex particle patterns that pop up. Some of them look extremely difficult, and require careful movements, but each one has a clear solution you can suss out. Then it becomes about actually getting the job done and moving quickly to avoid the bad particles. The game is definitely just one that requires practice, and finding a balance between not making mistakes, and moving carefully. 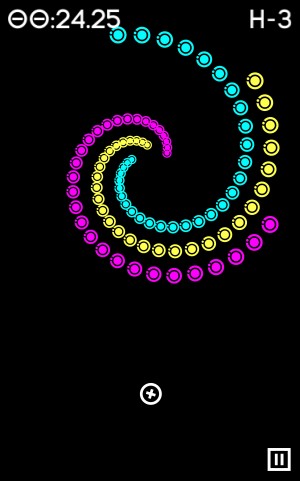 The game by default uses a 1:1 offset control system, which is quite useful because you can easily touch and drag anywhere on a phone. There are also two faster speeds available, so there’s definitely options if you want to find something more comfortable. But the default 1 movement speed feels great on both the iPad Mini 2 and iPhone 6 Plus which I played on, so I applaud the game for its default options.

Satellina thankfully got its colorblindness update in right at launch, which is great because the red-yellow-green color scheme, while logical because of the universality of traffic lights, can be confusing when everything is moving fast. Yellow and green really aren’t that different when everything’s moving rapidly. As such, I recommend enabling one of the alternate control schemes; it only takes a few rounds to sort out which colors correspond to which of the original colors. But most importantly, this makes the game accessible to people with colorblindness, which is always welcome. Otherwise, this game, visually, is as minimalist as it gets, but it doesn’t need to be anything complex.

Satellina is just a solid experience. Its degree of difficulty never gets to be too intense, but it is quite challenging. The controls make it so that it’s never too frustrating, along with each challenge being a bite-sized one. You’ll likely get the most enjoyment out of this if you’re a fan of speedrun-type games, and like trying to improve your times and to compete against others’ times. Perhaps the game is not the most difficult, but it doesn’t have to be: its challenges are pleasingly small. Except for the all 50 level challenge. That’s a mini-marathon. This game does well in both short sessions and longer sit-down plays, though, and I really enjoyed my time with the game. Check it out if it piques your interest.