Of all of the Ultima games you would expect someone to want to make a tribute to, Ultima 2 has got to be near the bottom of the list. Oh, it’s no Ultima 9, to be sure, but I’ve always seen it as the little road bump on the way to Ultima 3 and 4 more fully realizing the concept of the series. It’s a familiar story for sequels, I suppose, but by playing things a bit too safely, it had to succeed without the novelty of the original game and all of its faults. It was still a pretty good game in its time, but relative to the series on the whole, I think it’s kind of underwhelming. I’m sure a whole list of people might disagree with that, and at least one of the names on the list would be the developer behind Lowlander ($1.99).

Lowlander is an interesting case, because it’s not often that a game paying direct homage to a classic is actually better than said classic. In this game, you play as a humble adventurer who soon becomes a knight, going on various quests issued to you by the king. There’s a big world to explore with lots of towns, dungeons, and loot scattered around. The gameplay is streamlined well enough that you can play with one hand, but the game on the whole is complex enough to keep you engaged. Lowlander serves as something of a counterpart to last year’s enjoyable Vigil RPG ($1.99), a game that cut away all the fat of exploration and focused on strategic battles with a variety of enemies. Here, the combat is reduced to its bare minimum, but the exploration is delightful and satisfying. 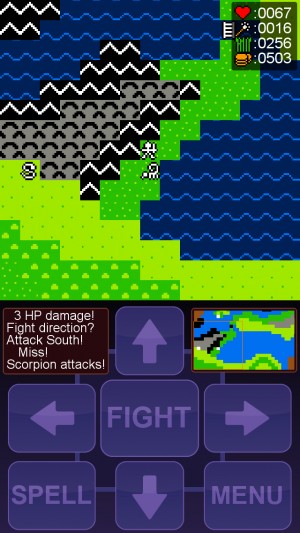 It’s always interesting to me to see what faux-retro games decide to keep from the old days and what they opt to discard. In the early days of gaming, RPGs were perhaps the most inscrutable genre outside of overly technical simulations. I think it’s no coincidence that the rise in popularity of RPGs went hand in hand with them becoming easier to pick up and play. Many elements from the early days had little reason to exist other than the fact that they were copied over from pen and paper games, and frequently served to increase the challenge of games that were already more than difficult enough. Certain things simply needed to be re-thought, and continue to appear in games today in a modified form, while others were left behind with very few people mourning the loss.

One of the things we don’t see too often anymore outside of the roguelike sub-genre is a hunger mechanic. Early RPGs often had this kind of system, and I suspect most of the reason they did can be chalked up to the simple matter of Rogue and its variations having it. Basically, you had to make sure you had enough food, and if you ran out, your character wouldn’t last much longer. This makes a lot of sense for roguelikes, because it serves as a turn-based timer of sorts. It keeps you from hanging around on one floor and grinding yourself up against weaker enemies to mitigate the considerable risks of whatever mysteries lay ahead. You need food, so you have to move on, even though it’s dangerous. It makes a lot less sense in what we now know as the traditional CRPG, established by the mighty high-five powers of Ultima and Wizardry. The early Ultima games used this kind of mechanic, with typical results. It makes the early stages of the game more difficult, which can be a good thing, but soon fades into irrelevance or annoyance, depending on how the game’s economy works.

Lowlander uses this mechanic, and it plays out in much the same way. The chances are very good that your first death or two will be of starvation, but after the first half hour or so of the game, you’ll have more than enough money to stock up on food, to the point that you may not have to worry about it ever again. It’s an odd thing to keep, especially in the face of so many other concessions to the evolution of the genre. At any rate, it doesn’t make much of a difference in the long run of a fairly lengthy game. Lowlander runs about the same length as Ultima 2, so you can count on several hours of enjoyment if you opt to take the plunge. It’s all fairly straightforward stuff, with most of the challenge tied up in resource management, but the snappy pace and satisfying growth curve in terms of your character’s power and abilities makes it fun for the whole ride. 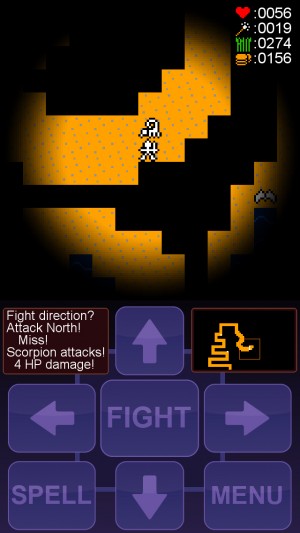 The game starts off very simply, with your character capable of moving and not much else. You’ll soon get a sword, which allows you to engage in battles with the creatures roaming the world, and not long after that, a wand, opening up the world of magic to you. Your transportation options also open up as you play, allowing you to visit more of the game world and seek out new mysteries. Gaining experience and levels makes you stronger and gives you new spells, while towns and dungeons offer upgrades to your equipment. Combat plays out on the map itself and doesn’t involve much more than you and the enemy swinging at each other until one of you dies, though you do have the option to use magic once you’ve learned it, and there are status ailments you’ll have to deal with from time to time. Essentially, you need to make sure you’re strong enough to kill whatever you’re facing, have enough resources to continue on after the battle, and are paying attention to what’s going on around you so that monsters can’t gang up on you. Since enemies can attack diagonally, you’ll ideally want to find a choke point and handle crowds that way.

As you become stronger, the random, visible encounters on the world map will spawn more powerful foes. Dungeons have fixed encounters, so if you find you aren’t strong enough to handle a dungeon yet, don’t worry, you will be at some point. There’s very little customization involved with your character, with no job classes, party members, or anything like that, but you can pick one stat to give an extra boost to whenever you level up, so you have some agency in what they’re able to do well. The funny thing is, for all of its simplicity, and perhaps partly owing to it, I couldn’t stop playing Lowlander. It’s like a vintage CRPG filtered through the lens of nostalgia, being more like the game we remember Ultima 2 being, rather than the one it actually is.

There are a few things I don’t care for in Lowlander. I’ve mentioned how the hunger mechanic kind of becomes useless very early on, and many of the items also become worthless a little too quickly, especially when weighed against your valuable inventory space. The game only offers up a single save slot, which really shouldn’t happen in this day and age, particularly since you can find yourself in an unwinnable state with no choice but to restart. I’m also a bit mixed on the NPC dialogue. On the one hand, it’s pretty true to early Ultima, full of weird and sometimes out of date pop culture references, plus a whole pile of repeated text no matter what town you’re in. On the other hand, it’s really weird and jarring to come across references to Obamacare and ex-mages talking about going into app development as a career. It made me laugh once or twice, but not nearly as often as it appeared to be trying to. Which, I suppose, is also just like early Ultima. 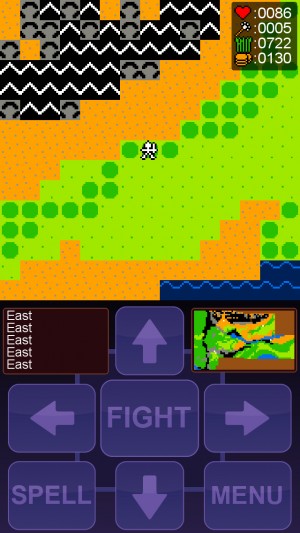 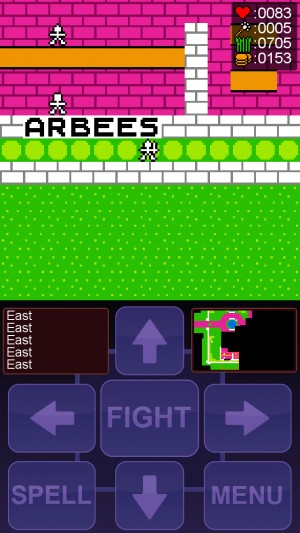 The presentation is as simple as that found in its inspiration. It uses a brighter and more natural color palette than Ultima does, but it’s still using just a handful of colors, and very few sound effects. There are sounds to warn you when an enemy spawns, and you’ll make noise with each step, but there’s no music to speak of. There’s also very little animation, and pretty much every character and monster in the game is a solid white shape with a black outline. It has a definite humble charm to it, but I could certainly imagine it being too retro for some people’s liking. One touch of modern times does seep in, as Lowlander has Game Center support. I like having achievements in games like these, so it’s a welcome addition. It’s also worth mentioning that there isn’t a lick of IAP in the game.

For all the nits I’ve picked in this review, I actually enjoyed Lowlander quite a bit. It’s simultaneously a loving ode to Ultima‘s earliest days and a solid game on its own merits. It’s well-designed to fit mobile hardware, and sensibly updates a lot of the things that didn’t work too well in Ultima 2. I’d love to see a sequel that expands on the ideas here in the way that the follow-ups to the second Ultima did for that series. As it is, however, several hours of Lowlander flew by in the seeming blink of an eye, which is as solid an endorsement as I think I can give a game. As long as you’re open to a few nods to early RPGs, you really can’t go wrong throwing a couple of dollars down on Lowlander.