Hexxy Snake ($2.99) is pretty much the Super Hexagon ($2.99) version of Snake, the granddaddy of all mobile games, the game that convinced folks that playing games on a phone was a good idea. This is the Super Hexagon take not just because the game takes place on a hexagonal grid, no: it throws in a number of glowy visual effects to try and spruce things up, while featuring 100 fixed levels to play. It’s an interesting game, but one that’s just solid at best. 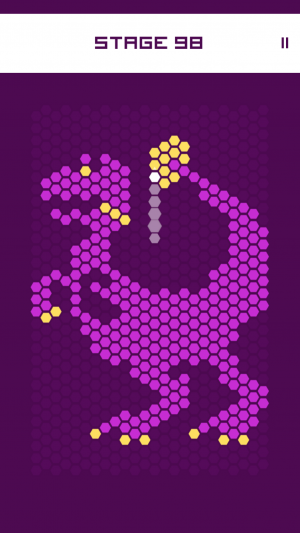 Essentially, this is level-based Snake, where you control a snake that can turn left or right. You must eat all the dots and then reach the exit. The challenge comes in where you are playing on a hexagonal grid, so any turn doesn’t send you perpendicular to where you were before, just off to an angle. So, you have to deal with a different way of playing, along with many devious mazes to deal with. Good luck with that!

My immediate suggestion is to play the game on Hell difficulty, the hardest one there is, from the beginning. The reason I say this is because the default difficulty, Hard, is absurdly slow to the point that the game felt broken when I started playing on that difficulty. Thus, I really, really recommend starting each level on Hell and going down to Mad or Hard as necessary. But Hell is where this game feels at its most fun and fluid, not sluggish. There’s plenty of challenging levels that as time goes on, you can dial it down as necessary.

I find this ironic since the game does try to tease that every difficulty is meant to be hard, but “Hard" winds up being like trying to hit an eephus pitch in baseball. It’s really slow, so that it should seem easy enough to hit it, but it’s too slow, it requires a whole new timing to figure out. That’s the “Hard" experience, you’ll likely just screw up so much that you won’t be able to do well. The “Mad" speed experience is a lot more comfortable and fun to play with. “Hell" is really fast, but it feels like the kind of challenge that this game should be offering, where you have to react quickly and know how the mechanics work in order to succeed. 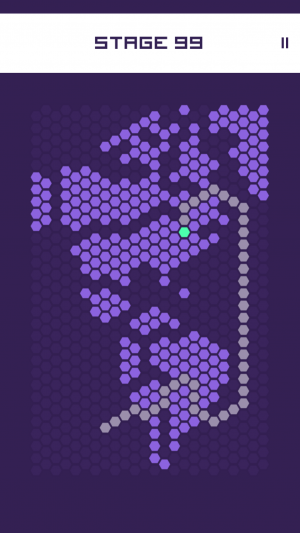 The game does feel a bit off compared to regular Snake games because the way you make 180 degree turns is different thanks to the hexagonal grid. You have to account for the hexagonal turning, you can’t just turn back and graze yourself, essentially. There’s kind of a pivot hexagon that you can spin around, basically. Once it makes sense to you, the only thing stopping you is your reaction times. I’m not sure that this is an improvement on Snake, or Tron lightycles, or anything that uses the “always moving forward with turns" control system. It’s a system that works, but with some growing pains.

The three-star system just being based on difficulties alone is disappointing. For one, the game probably would be better if it only focused on having one difficulty instead of the three different ones, one of which is miserably slow. The game should track time, since there are difficulties in trying to complete levels in one fell swoop, and making mistakes happens often! So, why not have a reward for completing levels in under a certain number of seconds or steps? There’s so many more interesting possibilities than just giving me three stars for playing on the one grown-up difficulty.

Hexxy Snake is far from the worst game ever. It is remarkably challenging as it goes along, and perhaps the hexagonal grid will prove more enjoyable as a new way to play a familiar game instead of feeling annoying. It’s a matter of taste, but it really feels like it’s a step back for the concept. There are a hundred levels to play and no in-app purchases, so you’ll likely get a great dollars-per-hour on this one, if that’s a concern for you.

Hexxy Snake is probably more a noble failure than anything else. It tried something, and it wasn’t quite to my taste, but I appreciate what the developers tried to do. Can’t quite say I recommend trying it unless something about the concept really clicks with you, but it’s not awful, just flawed.