It’s no secret that I’m a huge fan of Injustice (Free) on mobile. I’m also a huge fan of pro wrestling. So when NetherRealm Studios and Warner Bros., the makers of Injustice, announced a partnership with the WWE to create a new mobile brawler, I got all kinds of excited. The thought of taking the Injustice game and simply plugging in a bunch of WWE wrestlers was enticing. And well, that’s pretty much just what they did. WWE Immortals (Free) is basically Injustice: WWE Edition, and while that’s not a bad thing by any stretch seeing as Injustice is a proven winning formula, it is somewhat disappointing that there’s barely anything substantial to differentiate the games from one another. That said, Immortals is a solid foundation to build upon and it should please fans of both Injustice and the WWE.

WWE Immortals begins with a cinematic explaining the story. Yes, there’s a story. Something about Bray Wyatt’s special lantern getting stolen by The Authority and then getting accidentally activated which creates a bunch of alternate universes and various superhero versions of WWE Superstars. Yeah… Anyway, the story stuff isn’t important. All that matters is that there’s a group of awesome powered-up superstars who are all fighting each other for some reason. 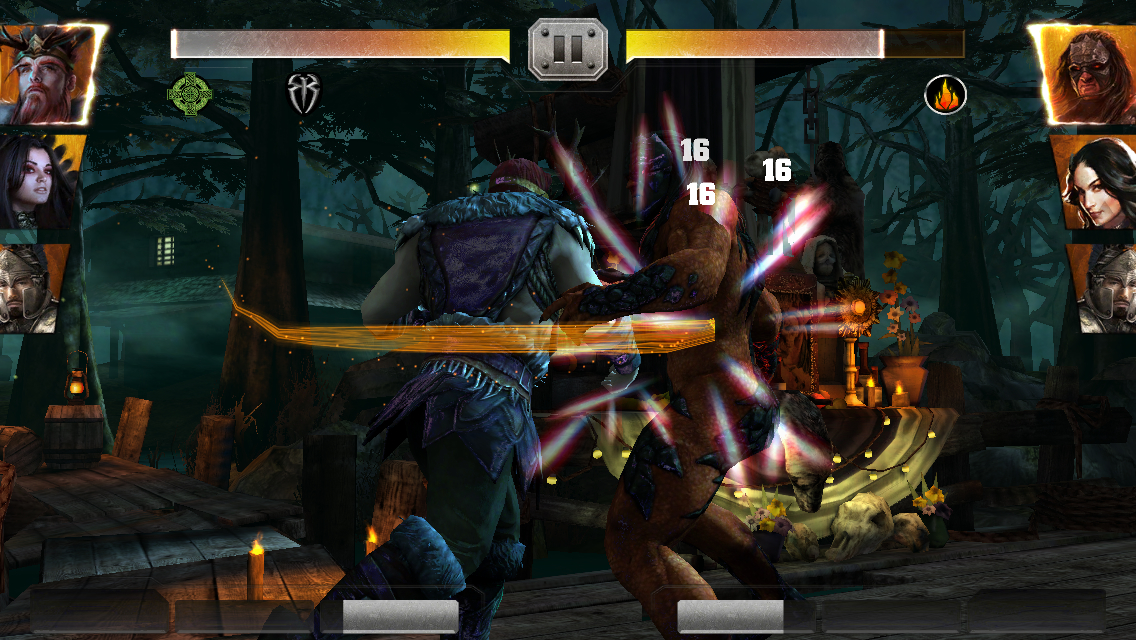 The different character designs are one of the brightest spots in Immortals. NetherRealm and co-developer Phosphor Games did a great job creating these new versions of established WWE Superstars. Also, because the wrestlers aren’t bound to their real-life personas, there’s the ability to have several different versions of a character in Immortals. The roster is super small in this initial release, but already you can see this in play. For example, there’s a Bronze version of Sheamus that’s the “Ancient Druid" version where he’s rocking a fur outfit and an antler crown. Then there’s the “Celtic Warrior" Silver version of Sheamus, which looks more like a character out of Braveheart with his shield, armor and body paint.

Speaking of Bronze and Silver, that’s how the character cards in Immortals are split up: into Bronze, Silver and Gold versions. In typical fashion (and exactly like Injustice) the Bronze are the weaker cards and the Gold are the stronger cards. Using cards in battle will earn experience which goes towards leveling up each card, and when you get a duplicate of a card you already own you can increase its “Legendary" level (called Elite in Injustice). WWE Immortals, like Injustice, is all about collecting and upgrading all the cards through battle. It’s very much a grind-a-thon, but a super fun one. 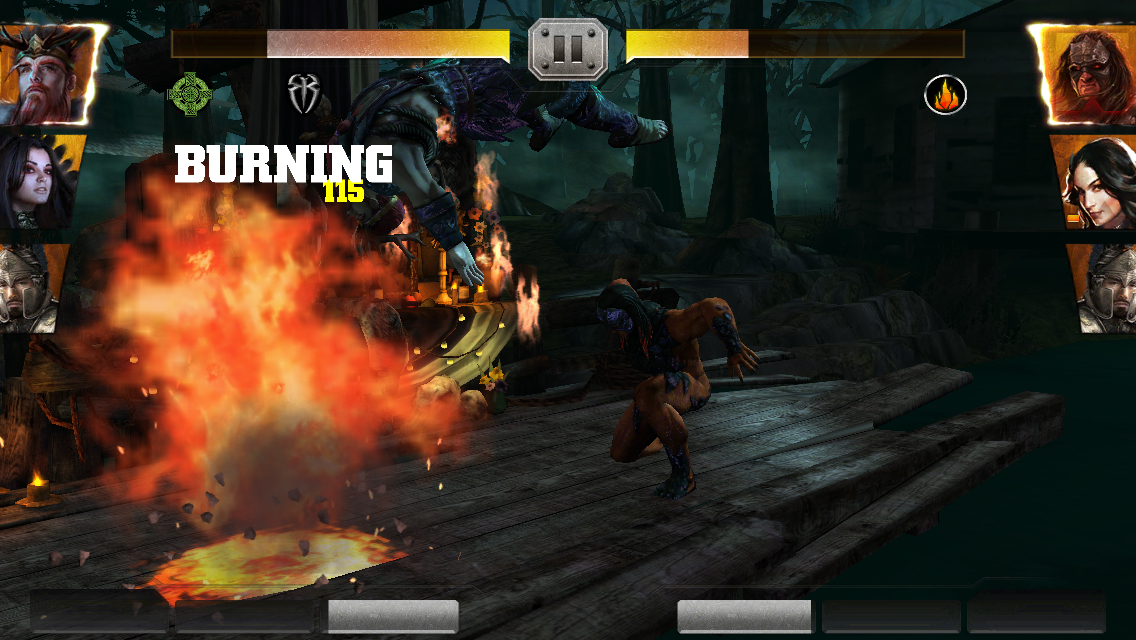 The battling itself is (surprise!) again almost identical to Injustice. Taps and swipes perform light attacks and heavy attacks respectively, and performing multiples of either type attack in succession will execute a combo attack on your opponent. Holding down two fingers on the screen performs a block. There’s a three tier special move meter that fills as you fight, but you’ll have to unlock the second and third tiers on each of your cards before you can use those.

The fighting in Immortals is simplified but really satisfying. There’s a certain rhythm to your tapping and swiping, and once you get comfortable with the system you’ll feel like a finger ninja with all the quick moves you’re performing. Also, as much as it might seem like Immortals is a button-masher, it’s not. True, the combat can be pretty mindless when you’re facing a woefully underpowered opponent, but at later battles timing and strategy is crucial for success. And even then, sometimes the brutal AI will just beat you down even if you put up a good fight. Practice, patience and skill are all requirements to be successful in Immortals. 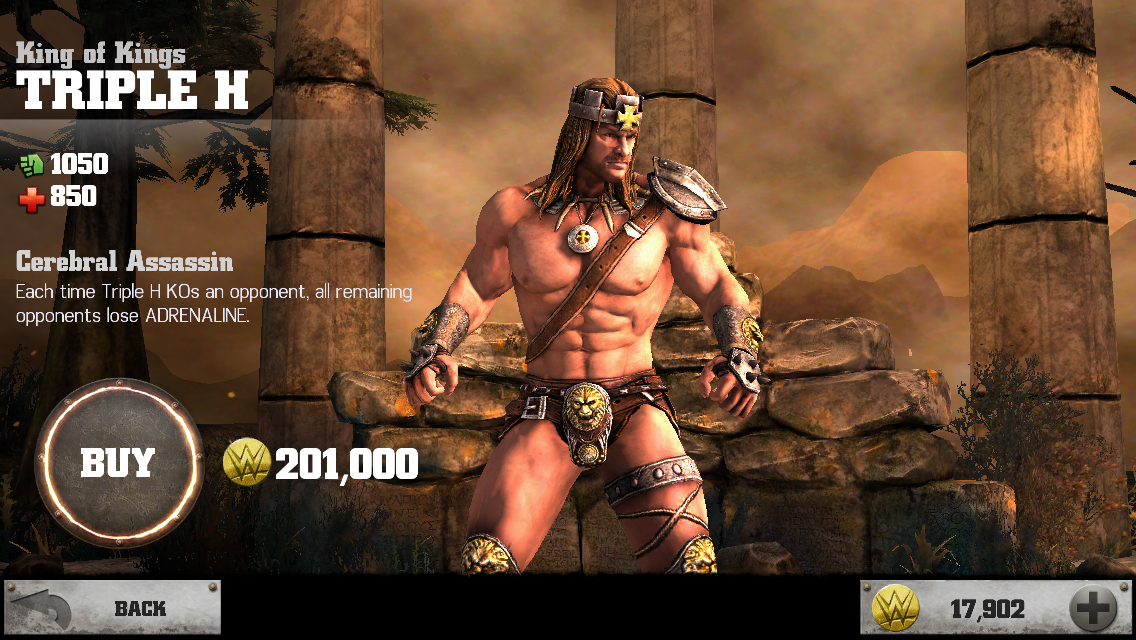 Once you complete the single-player part of the game there’s an online multiplayer portion waiting with even more opponents to face. This works pretty much like Injustice too, as you’re not actually fighting another person in real-time, rather you’re facing the team they’ve set up and battling against their own ghost AI. Real-time or not, the online portion is fun, and should provide endless battling long after the campaign is completed.

One major factor to Immortals is its free to play model. Again, this is almost exactly like Injustice. Each character has their own energy meter, and the amount of energy it requires to partake in each battle varies, typically depending upon difficulty. You might get ten fights out of one energy bar, or you might only get a few, depending on what you’re doing. The key factor though is that it’s per character, so as your roster expands so does your ability to swap out depleted characters and continue playing uninterrupted. This makes the early portions of the game very slow-going, but eventually it opens up and before too long you’ll be able to play for pretty much as long as you want without ever having to worry about the energy system hampering you. 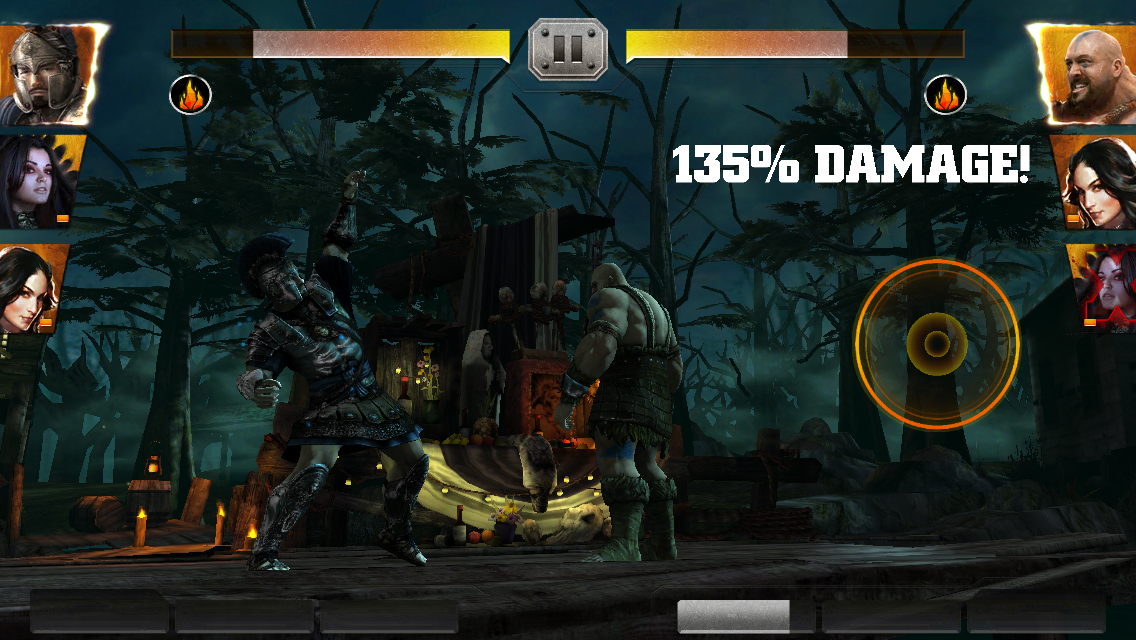 The actual IAP in the game is another story, and this is a criticism I have against Injustice too. The value of the coin packs in the store is really poor. Once you have a decent stable of upgraded characters, it’s easy to grind out tens of thousands of coins just by playing. So while I’d certainly be down to spend a little cash on Immortals (and Injustice), it just doesn’t seem worth it when I could get the same amount of coins for free with minimal effort. Injustice had a “starter pack" for five bucks that gave you a higher level card and some other assorted goodies, and that was money well spent in my eyes, but Immortals doesn’t have anything similar. If they upped the amount of coins in each pack I might reconsider, but as of right now I don’t have any desire to actually spend money in the game.

If you’re an Injustice fan and feel like everything I’ve been describing feels all too familiar, that’s because it is. I can’t overstate just how similar these two games are. It’s not a bad thing since I love Injustice and am happy to have more of it, but it is kind of disappointing that the developers didn’t really try to do anything drastically different with Immortals. The one big change in Immortals, and to be fair it is a very welcome one, is the Rivals/Allies system. Every character has certain other characters that are either Rivals or Allies, and placing those characters on the same team can result in various benefits (or drawbacks). It’s sort of an expansion on an idea used in Injustice, where teaming up certain characters would provide special bonuses, but in Immortals every character has this. It’s actually a really smart way to add a layer of strategy to who you team up with who, rather than just pairing people up willy nilly.

WWE Immortals is a tough game to rate at this point in time. It feels very “version 1.0" in regards to the number of characters and environments in the game. The campaign and online battling is fun, but at its heart this game is all about collecting and upgrading a massive roster of cool characters. Don’t get me wrong, what’s here now is solid and a lot of fun, but it pales in comparison to its counterpart Injustice, who has had the benefit of almost two years of regular updates. I have no doubt that Immortals will eventually get to that same point, but it will take time. However, there’s really no end to the potential of the game with how many different wrestlers there are that can be added in updates. The same can be said of new game modes and special events.

For now, WWE Immortals is a great new option for fans of Injustice, and it’s a great experience for those who are simply fans of the WWE. It’s a great game because it’s a reskin of a great game, but that doesn’t bother me too much. I’m excited for the future of Immortals because as history has show with Injustice it should only get bigger and better as the months and years roll on. Being free to play (and a very fair free to play model at that), there’s no reason not to check out WWE Immortals for yourself if you’re into fighting games or wrestling, and be sure to drop by our forums and check out our beginner’s guide for more on the game.