I know people around here love to moan and groan when a new free to play game hits, particularly when it comes from a popular or potentially nostalgic franchise, but man is the writing on the wall that’s what millions upon millions of people are looking for. SimCity BuildIt (Free) is definitely not the straight up port of SimCity 2000 that a lot of hardcore gamers are anxious to get on their iPads, but by nearly every metric there is to gauge the success of the game has shown that folks are loving it. 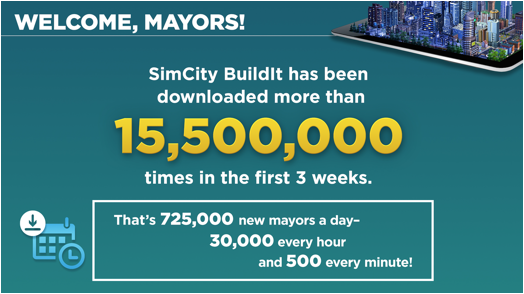 Per a infographic recently released by EA, the game has been downloaded over 15,500,000 times since it was first released. As they point out, that’s 500 new downloads every minute. In the time it took you to read this sentence, at least according to the average ~275 words per minute a typical adult can read, the game has been downloaded around 60 times. The infographic has some other crazy stats too, in that the cumulative play time amongst all those players is 8,300 years across 648,502,532 (and counting) game sessions.

To put that into perspective with how it compares to other SimCity titles, it’s really no contest. It’s hard to find exact statistics since these things don’t get published that often, but per the Wikipedia article on 2013’s “proper" SimCity release, the game sold over two million copies between its launch in March and when EA mentioned that number in an interview. In 1/4 of that same amount of time, SimCity BuildIt has around 8x more people playing it.

When you look at stats like that, arguments about how what people actually want is a “real" SimCity game really seem off base. Anyway, if this is the first you’ve heard of SimCity BuildIt and you’re not one of those 15.5 million downloads, take a look at our review. If you want to dig into the game further, we’ve got an awesome guide too.