As we mentioned in our review, EA’s freemium take on the classic SimCity franchise isn’t quite what most would expect. Still, SimCity BuildIt (Free) offers a pretty fair free-to-play experience with a lot of elements that pay homage to the series. With that said, there are always ways to be more efficient while playing a crafting title and we’ve got a few tips to help you get there.

Have a Plan For Your Inventory

You might think it’s a good idea to keep a healthy supply of every item just in case. However, I think a better idea is to know exactly what you’re looking for and to play to the requirements, not to stock. If you have a bunch of residences that are looking for a certain material, go crazy on stockpiling those as at least you know you’ll be able to quickly in and spend those on actual upgrades once they are ready to go. 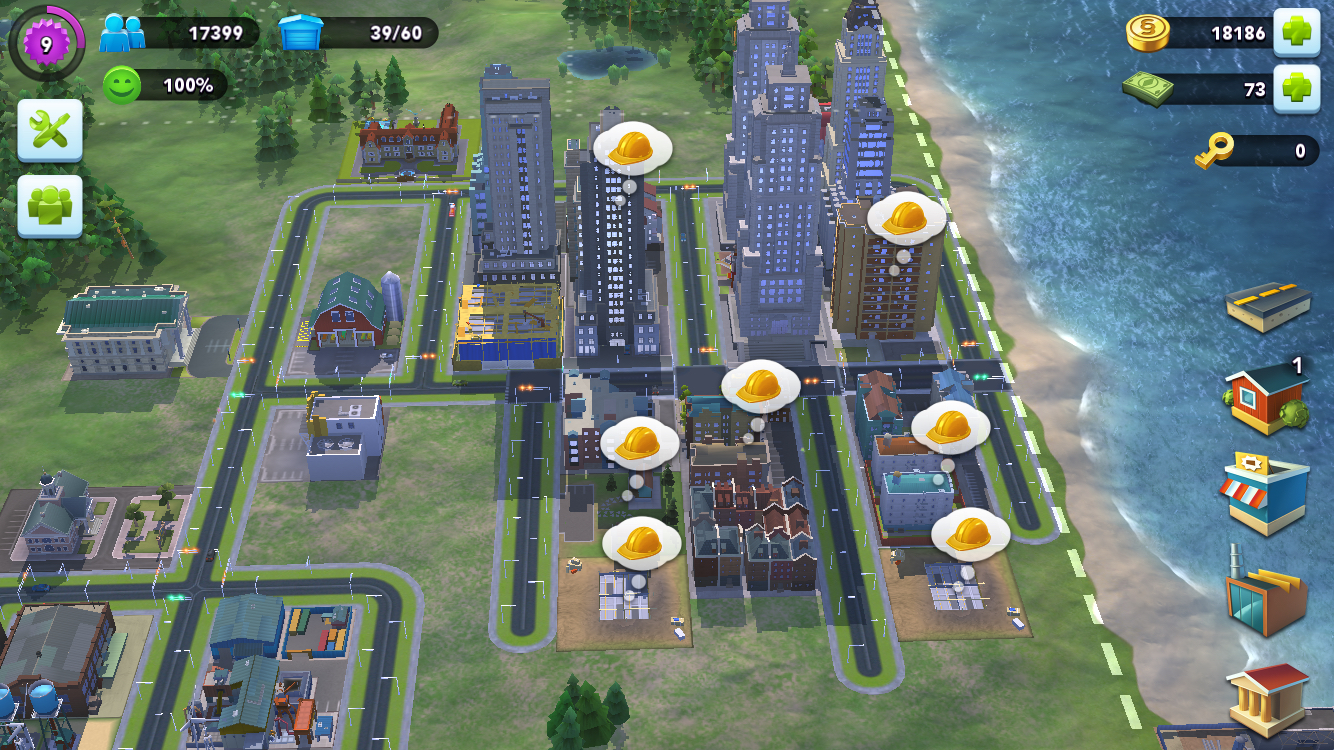 The Global Trade HQ Is the Best Way to Sell Excess

Once you unlock the Trade HQ, I recommend using it to sell your excess rare parts (i.e. expansion and inventory materials). The game gives you the opportunity to ‘advertise’ an item every few minutes, which means it’ll have a high chance of popping up when a player accesses their HQ. I’d suggest not only waiting until a free advertise is available (you can advertise multiple things at the same time for premium currency but I don’t think it’s worth it) but it’s probably a good idea to just sell your item at the maximum price available as someone will inevitably buy it even at that high of a price. I wouldn’t necessarily use the HQ to sell common materials, but if you manage to stockpile a good amount you can probably get a pretty decent premium simply because you’re selling a stockpile.

Make Efficient Use of Public Buildings

When it comes to public buildings, where you place them in relation to your residential buildings becomes an important part of the game. Ideally you want one building to touch as many residences as possible in order to maximize your investment since public buildings can cost a pretty penny. During the early game, parks and fire departments are the big public businesses to pay attention to so I’d suggest early zones that have a road above three residences in a row, two residences above the road with a park and fire department in the middle of them. All five of the residential zones get access to the public buildings and road and you’re left with only a few empty spots. Obviously as you start to unlock police and specialty buildings, you’ll need to rearrange but in the beginning this is probably one of the better ways to organize your buildings.

Don’t Ever Use SimCash for Timers

This is a pretty standard tip for any timer based freemium game but it’s worth repeating: don’t ever spend your premium currency to speed up a timer. It’s almost never worth it as you’ll always get the benefit of what you’re speeding up with just a little more time. Most freemium games love tempting you with spending premium currency to finish a timer because it appeals to the instant gratification desire in most people. Just don’t listen to it and, if all else fails, go play another game until the desired timers are finished.

Don’t Overextend at the Onset

When you first start playing SimCity BuildIt, you might think you’ve been provided a decent amount of coin to start. This might feel particularly so as you start upgrading your residences and earning even more. However, I’d suggest that you really watch your spending at the onset, and choose to only focus on a few residences at the onset. As you start leveling up, you quickly unlock new requirements, such as water and sewage, that require significant capital in order to get them up and running. If you don’t have all or most of that money saved up, it’s going to take awhile to purchase them and give your buildings the ability to upgrade. 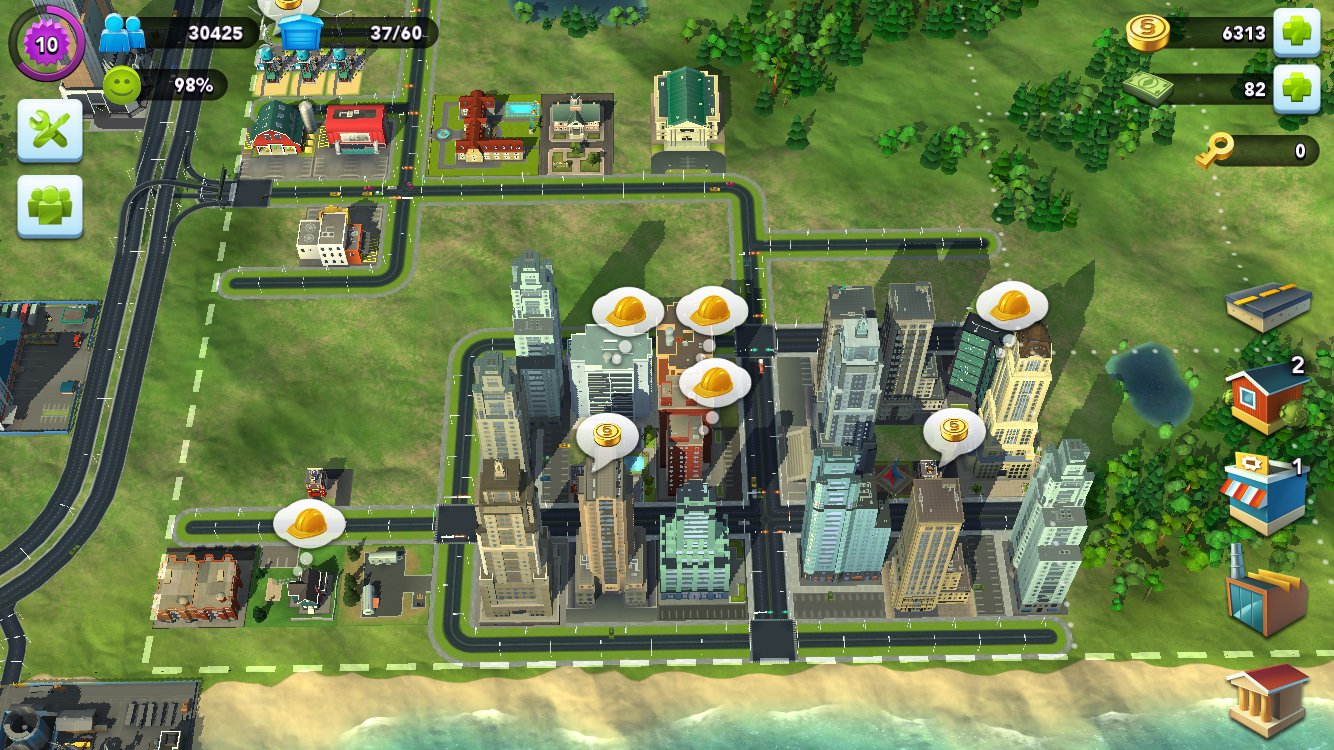 Extra Slots For Your Stores Can Go A Long Way

I’d recommend picking up at least the first additional slot for each of the stores you build. This is important for a few different reasons. First, unlike factories, your stores don’t build items concurrently which means it’s going to take a lot longer to build the materials you want. Second, the more slots you have, the less chance you have of having an empty store running if you haven’t been able to check into the game for awhile. Third, the more items you can queue up, the less items end up in your inventory, which means you can build and collect other things while your store items are in the queue. Finally, the first slot extra slot only costs four SimCash, which is a steal in my opinion.

Once you build the City Hall early on, you can start collecting taxes on a daily basis. An obvious tip is to make sure you log in at least once a day so you can collect your taxes and restart the timer (especially since coins are so important in this game). Another, less obvious step is to mind the relationship between happiness and taxes. The happier your citizens, the higher the taxes they pay, which is a proportion of the the citizens you have. Happiness is linked to making sure all citizens have access to parks, essential services, be free from pollution, and so on. This goes back to my suggestion on not overextending; make sure all the citizens you have currently are 100% happy before thinking of expanding.

Once you unlock higher end factories you can bulldoze your old ones and build the new higher end factories for a price. The benefit to better factories is being able to construct more materials simultaneously. The downside is the obvious cost of coins. It’s a great idea to upgrade at least one or two to basic factories, but I wouldn’t bother moving on to mass production or higher unless you really have the spare capital (meaning don’t waste your life savings on it) and you know you have the inventory space to handle the increased production. 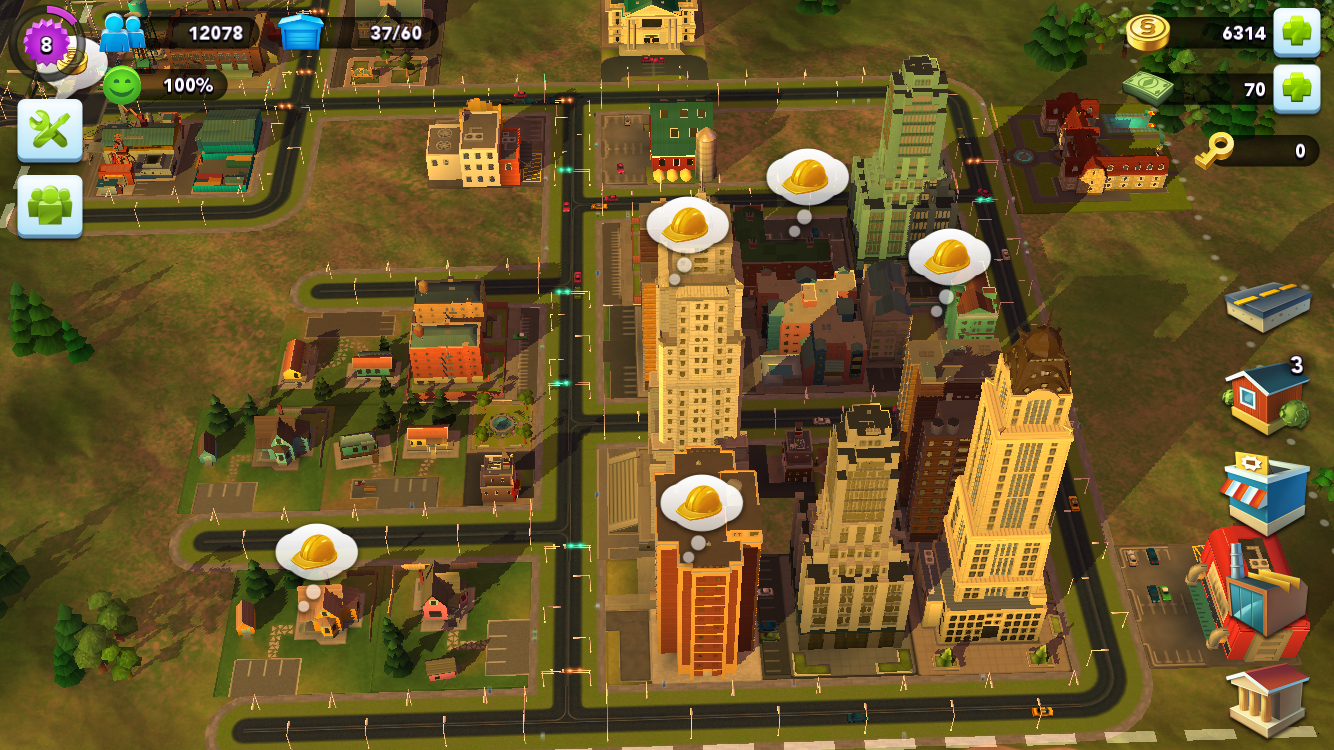 Build On Inventory in the Short Term, Land Expansion in the Long Term

Inventory space is incredibly important when you’re just starting out. Even when you get to the point where you can buy land expansion, you’ll probably still have a decent amount of space before you really need to start thinking of expanding. If you have lots of expansion materials lying around, I’d suggest slowly selling them through the Trade HQ (using the free advertising as needed) and using the coin towards purchasing inventory upgrades. Get to around 70 or 80 slots before pulling a 180 and then selling inventory materials to earn coin for expansion materials.

Have any good tips for SimCity BuildIt? Feel free to leave them in the comments section below or post in our forums.