As we mentioned in our Game of the Week post, there’s a certain amount of oversaturation that has hit the Match-3 genre on the App Store. Thus, the launch of Hero Emblems ($2.99) was met with some skepticism that it would be yet another Match-3 with nothing to differentiate itself. Thankfully that’s not the case with this gorgeous puzzler. Impressive strategic implications, beautiful visuals, and great RPG mechanics make this title worth checking out.

As guardians of the princess of a kingdom, things take a turn for the worse as the King falls ill. As your princess runs off searching for a cure, she gets captured by demons. As her (failed) bodyguards, you are naturally charged with recovering the princess while searching for a cure for the ailing King. Hero Emblems’ overall tale is probably the weakest aspect of the game, but only because it doesn’t really tread on new ground. However, the game’s characters have a certain charm that shines beyond the iffy translation. I didn’t play for the story, but I appreciated the personality. 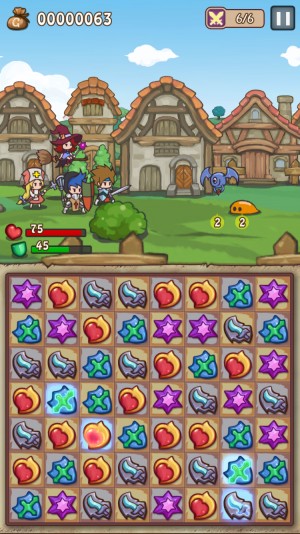 The gameplay, however, is something that I very readily play for. At its core, Hero Emblems is a traditional Match-3 with four basic tiles (representing each character) that cause different effects when matched. Swords and Stars cause physical and magic damage, respectively, while shields and hearts refill your defense and health. While the basics are familiar where Hero Emblems really shines is in its nuances. For example, matching 4 or 5 of the same icons creates special icons that, when matched, cause special moves. These moves actually correspond with different skills that be purchased (or found) and equipped for each character. Skills can actually vary significantly, such as causing different kinds of elemental damage or DoT vice immediate damage.

Skills get particularly important because some enemies that are encountered can be strong or weak against certain types of attacks as well as elemental damage. In addition, you may encounter missions that throw enemies at you that cause lots of debuffs (such as fire or poison DoT attacks or skills that lock down your tiles). Thus, if you’re having a problem with defeating a certain mission, it might make sense to reevaluate your skills to see if they match up. Typically, match-3 titles tend to focus entirely on the match-3 gameplay itself and very little strategy. It’s a pretty nice breath of fresh air that Hero Emblems focuses o both.

Adding to the strategy itself is the game’s tendency to be pretty challenging. Hard enemies will require either grinding (something that was rarely a chore for me as the match-3 gameplay is pretty great) or some pretty good strategy and luck in order to overcome them. For example, tough enemies may require you to make hard decisions as to whether it makes sense to replenish armor or life during a round or go for heavy damage. Your decision will hinge on whether you think you can take out the baddies before their next turn, which requires some substantive thinking for a match-3 title. Of course, grinding and upgrading your heroes’ gear (in the form of skills and attribute altering emblems) can address that challenge, but it’s always cool to beat a tough opponent via employing good strategy. 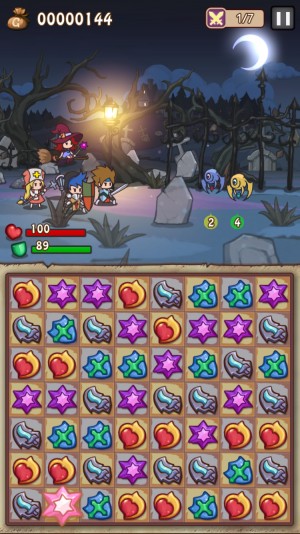 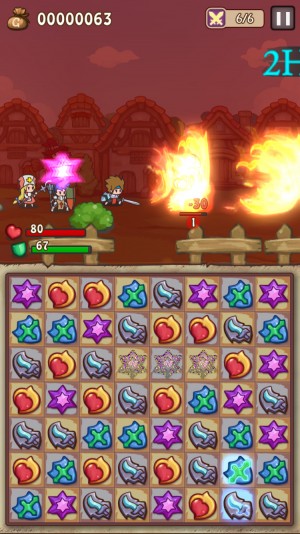 While I mentioned that Hero Emblems’ core gameplay is pretty standard, its production values make it pretty enjoyable to play. The game’s world map is pretty beautiful from an artistic standpoint and nice touches such as your party smoothly transitioning into a battle make the whole game one smooth transition between travel and battle. Battles are also strike a good balance between offering a challenge without being unnecessarily long, allowing players to get in a few random encounters with some small amount of spare time. I’m also a huge fan of the music which offers tunes that speak to both the fantasy and epic aspects of the game.

Offering an enjoyable experience in most of its aspects, Hero Emblems is proof that there’s still room in the market for a great match-3 adventure. The game’s RPG elements work well with its well-implemented match-3 gameplay while the game’s visual and aural flourishes differentiate it from the pack. The fact that the game is presented without any IAPs also provides a refreshing take on the fact that the game’s challenges can (and will) only be overcome with good strategy, a bit of luck and grinding when necessary. Hero Emblems is simply a great match-3 title that’s worth the price of admission.