I absolutely love Neutronized’s pixel art stylings. They added a lot of flair to their previous games Roar Rampage ($0.99) and Lost Yeti ($2.99), though both were darn good games in their own rights. Now they’ve returned with another pixelly game, and one that pays homage to single-screen arcade classics like Bubble Bobble with Drop Wizard ($2.99). It’s definitely a game that’s paying homage to the classics, and feels like it’d be a great fit in an arcade cabinet from 25 years ago or so. But Neutronized don’t just rest on their laurels with the retro homage, they actually make a game that’s remarkably clever in and of itself. 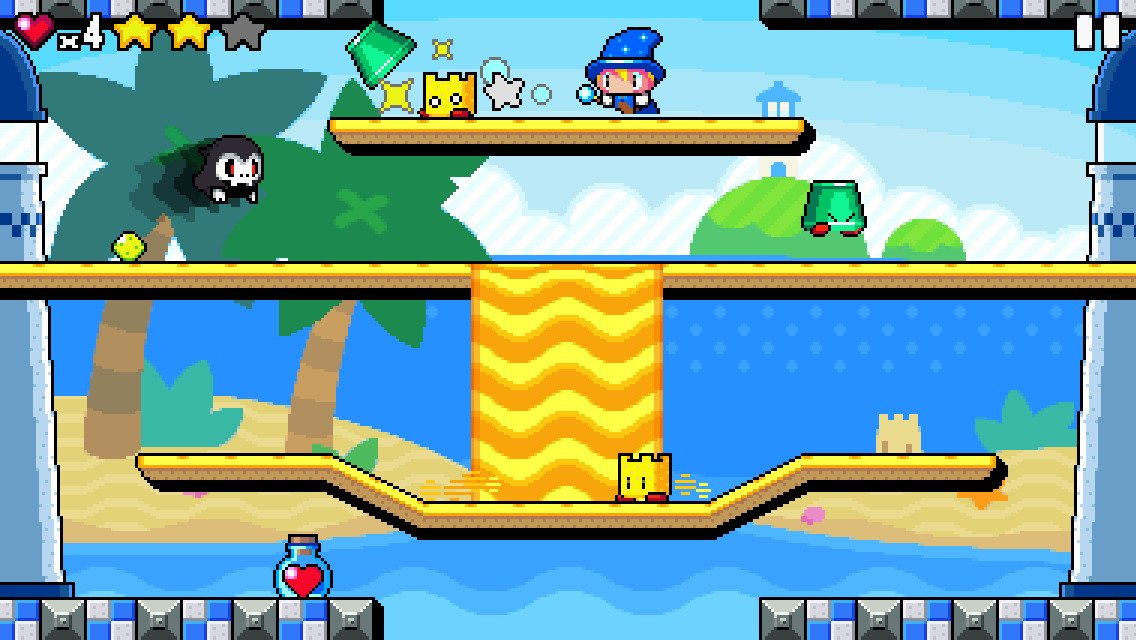 Drop Wizard‘s objective is to clear the screen of enemies, doing so by stunning them with stars that get shot out of the hero wizard’s wand. The hero can only shoot a star when dropping from one platform to another, and the levels loop from bottom to top. As such, each level becomes a puzzle to decipher. Which path needs to be taken to get back to the top on one side? How can movement be timed in order to hit enemies properly? The game is controlled by auto-running, with taps on the left and right sides of the screen to go in those directions, so hanging around on a platform and/or near a wall to time when an enemy needs to be hit is key to many levels.

Enemies can be stunned with the stars, and then hit to knock them around, as they roll into a ball. Here’s another key part of the game: chaining together enemy hits. A single enemy can hit one wall before dissipating into a points-giving candy item. Rolling enemies can pick up other enemies, stunned or not, and can basically hit an extra wall before exploding into candy. Thus, stunning enemies often becomes spatial in nature: getting them just to the left or right of a platform drop point can change the complexion of a level, possibly even making what would otherwise be a challenge into a simple excursion. But knowing where those subtle points are is part of the challenge. 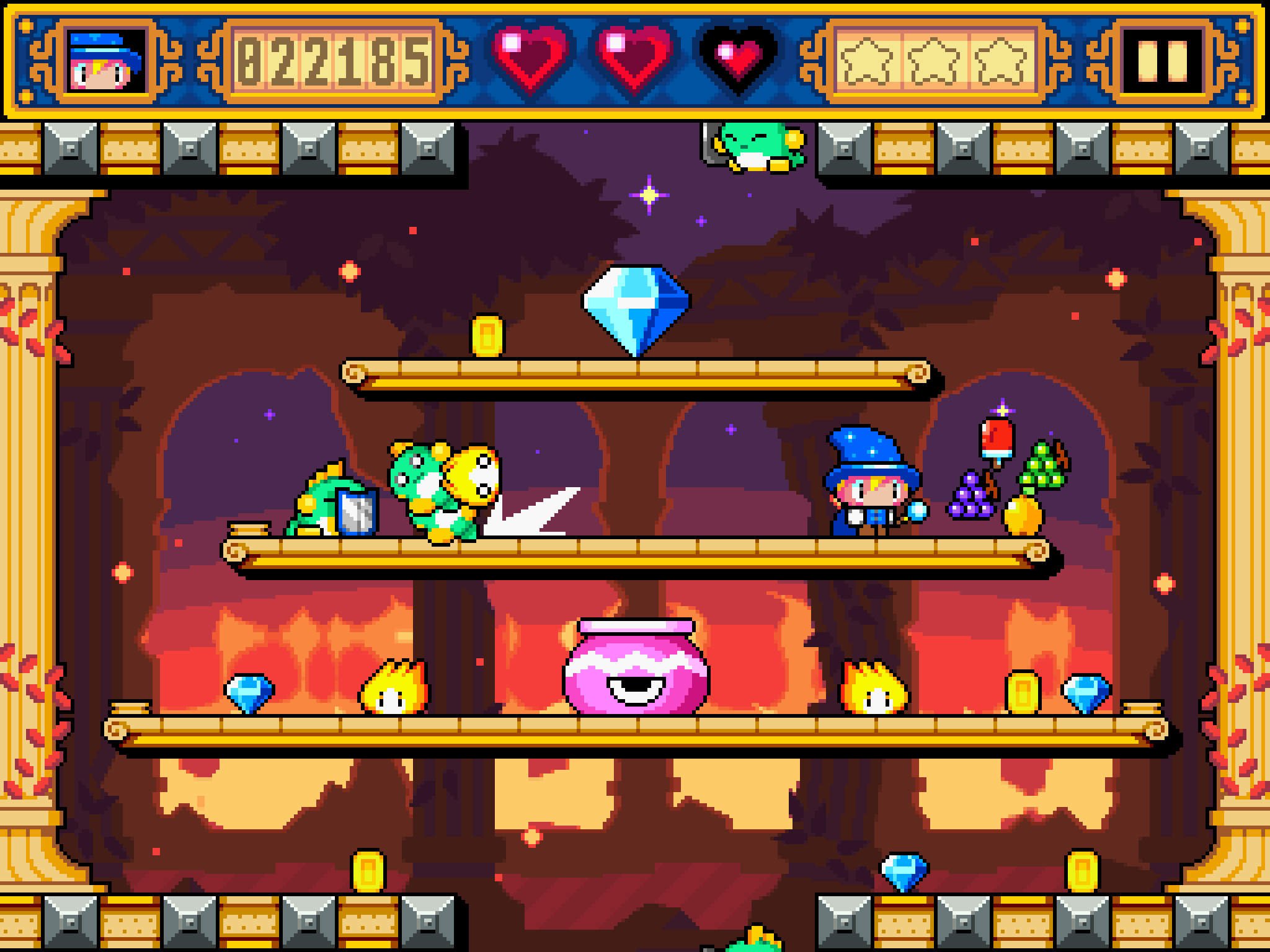 As well, there’s a three-star system in play, and it’s a unique one. There are little items on the ground, what I’m going to call pegs, and if an enemy rolls over them, then they often drop coins. But some have stars, and thus getting three stars is literally getting three stars: performing well, points-wise, doesn’t matter for score at all. Score only matters for Game Center leaderboards. I’d love, in this game’s arcade tradition, to see perhaps the high score of my Game Center friends to try and chase down, to provide some motivation to go after high scores that’s not just about checking the leaderboards. So the star system is not really a traditional star-based system, but more like Cut the Rope [appprice url="asdf"] in its functionality that you have to go out of the way to get them.

While Drop Wizard has a lot in common with other one-screen arcade games like Bubble Bobble, it’s really got that heavy puzzle element to it. Each level has its set of rules that you have to discover and then adhere to in order to make it through them with as much health as possible to make it to the boss fights alive. 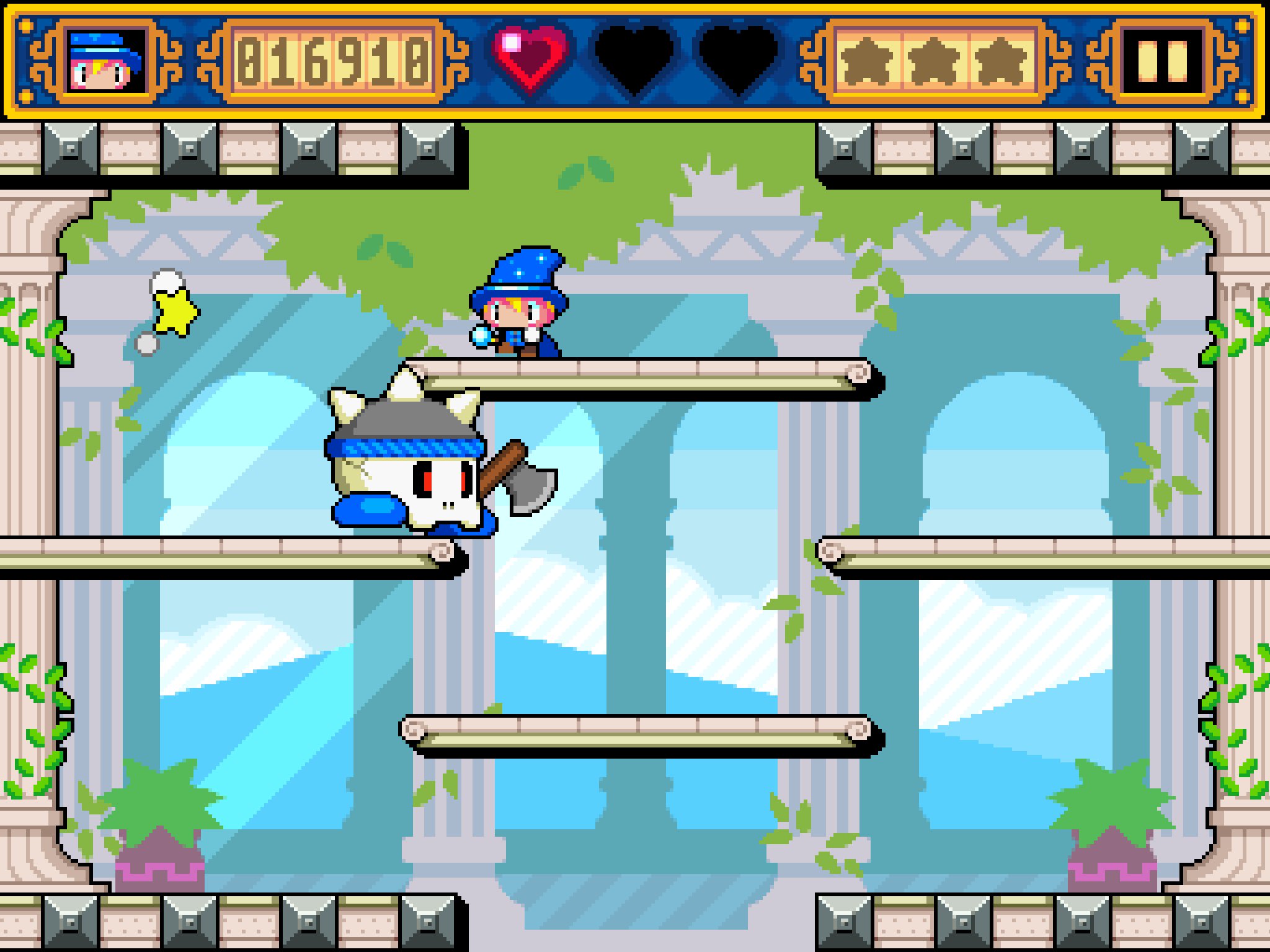 The enemies wind up playing a key role in this game’s cleverness. Each level presents unique challenges, with enemies that move in different patterns, or can block from being stunned if approached in a certain way. As well, the mix of these different enemies through out the ten sets of levels means that the game is constantly evolving and changing, and mixes of new enemies with old ones getting involved. It’s a game that really excels with active thought and participation, rather than just casual play. You have to look at it as an action-puzzle game rather than just an arcade game. The game can feel a bit clunky at times with its movement, and sequences where you trap yourself or are trying to get in sync with that one last enemy on the run are the few moments where this game struggles.

But, Drop Wizard‘s one-screen arcade roots are an immense part of the charm. Neutronized deserve to be mentioned among the iOS pixel art greats for this game. They managed to make a game that features great 16-bit art, but also nails the early 90’s aesthetic with sprite effects, music, and sound effects. It feels right playing this game on an iPad for the 4:3 aspect ratio. Sadly, there’s no MFi gamepad support. And there’s no iCade support, which I tested solely because it’d be really cool for this game, to play it with one of the actual arcade-style iCade units. I’d also appreciate iCloud to sync up progress, as I wanted to jump over to the iPhone after initially getting the game on my iPad. I suppose that’s as good a reason as any to play through the game again, maybe? 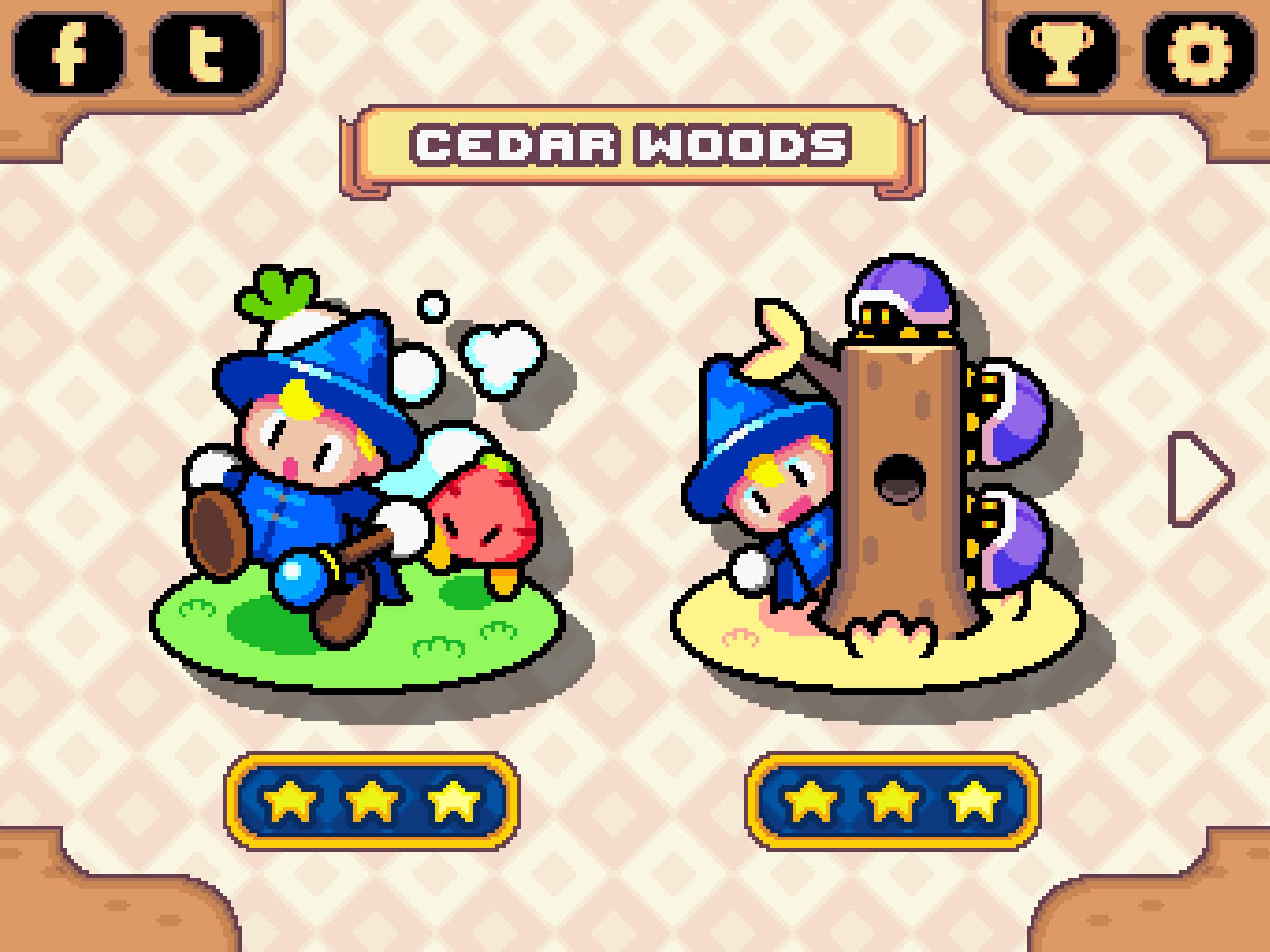 Neutronized has just made a remarkably clever game that could have just coasted on its pixel art. That they also nailed a really cool take on retro-style gameplay along with the aesthetic makes this the first must-have of 2015.