If Super Meat Boy had a rhythm based mini-game, it might look a lot like Give It Up!($0.99). A strong techno beat drives the latest offering from Invictus. The first time I died the game told me ‘Maybe you should go watch TV.’ As a fan of good burns, I took this as a good omen of things to come. I was not disappointed.

Give It Up! is a typical rhythm based reaction game with a few interesting design decisions. The first thing to realize about the game is that it is not a party game. Mistakes you might make as a player are punished and mocked and generally extremely frustrating. With a typical rhythm game, you might end up losing points or a combo if you miss a note, but the price for failure is always death in Give It Up!. From a design perspective, it is a strange thing for a rhythm game to not also be a party game, but if Give It Up! isn’t quite as difficult as, say, Super Hexagon($2.99), it still shares the same tacit contempt for the idea of casual gameplay. 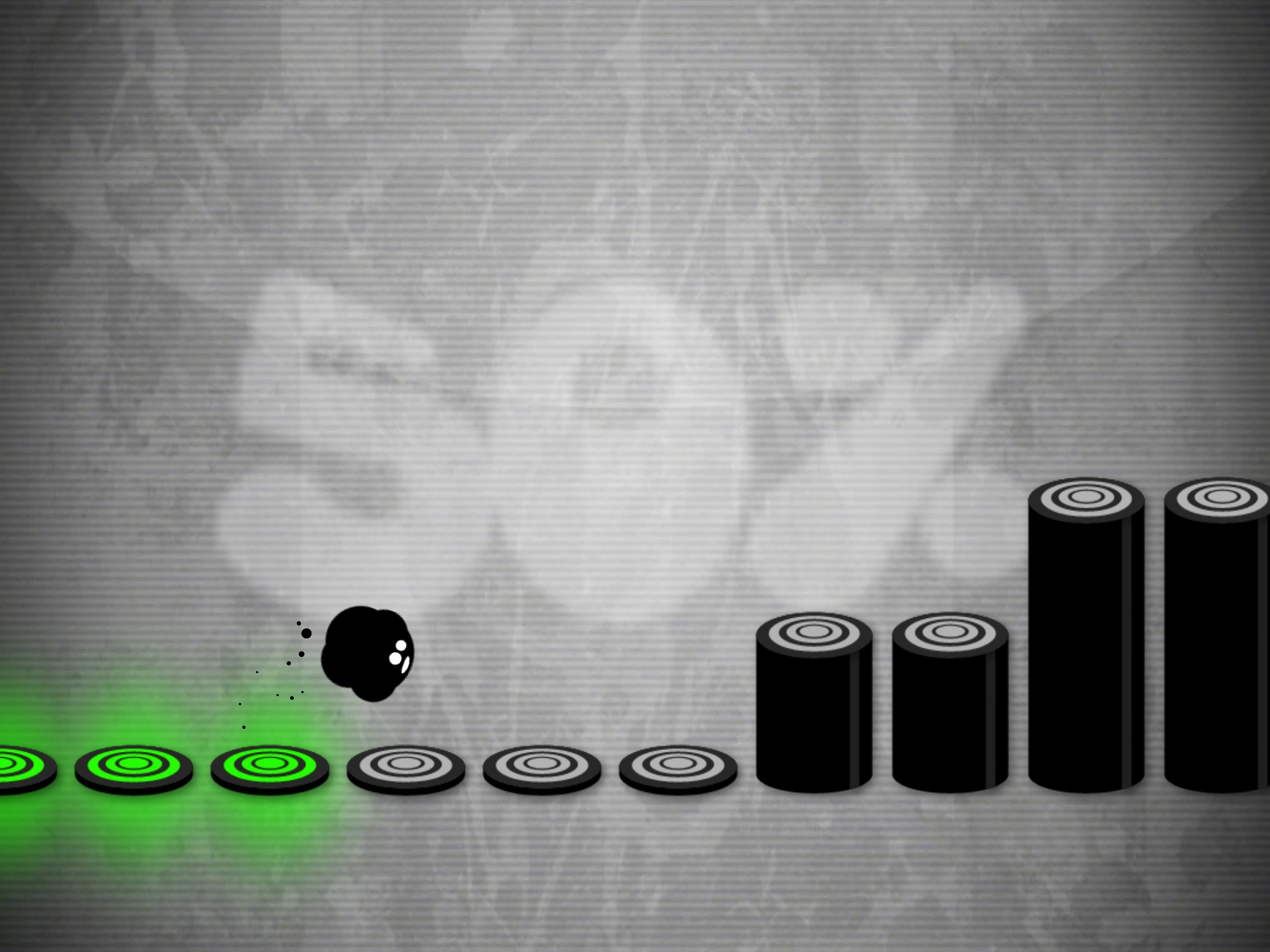 The objective of the game is to traverse a landscape of pitfalls and obstacles by jumping over them in time with the music. If you jump too late or too early, you will end up getting stuck on a spike or splattered against a wall. In the background of the game, you can see a counter tallying up the percentage of completion you have reached in your current level.

The controls and UI of the game are very minimal. The only decision you really make through out the entire game is whether to jump or not to jump. Jumping at the wrong time will get you spiked or squashed just as quickly as not jumping when you need to. Your ability to parse the upcoming terrain to determine what beats you need to tap on or skip will dictate your success in Give It Up!. Unlike most games in the genre, if you miss a beat you don’t get a second chance. The upside to this is that each time you complete a song, you’ve also 100%’d it. I can tell you there is nothing so annoying as getting above 90% but still failing one of these songs. 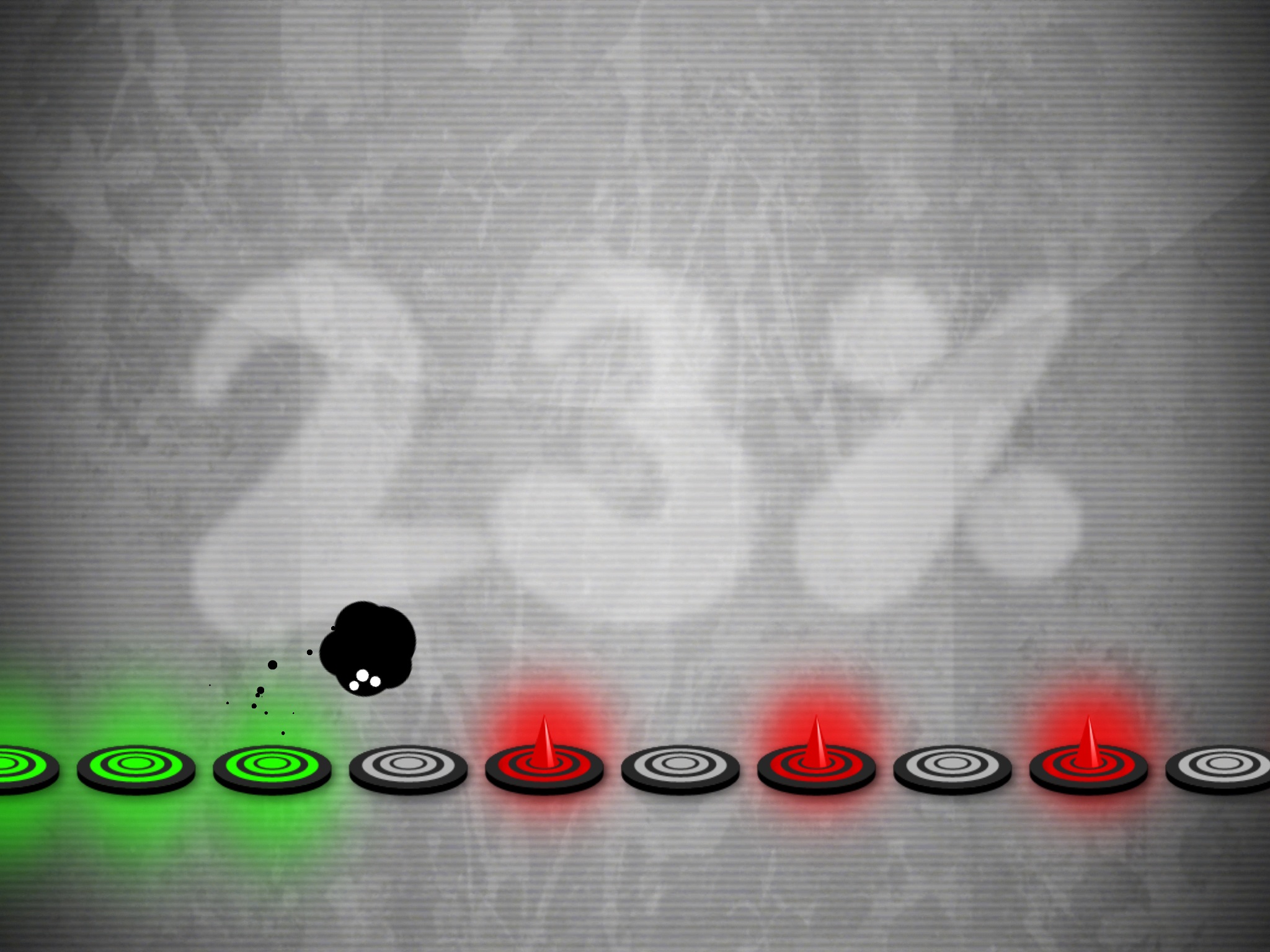 One major negative that the game currently suffers from is that there is a single song that you are hopping along to level after level. While that might be acceptable for a free app with IAP add-ons, I kind of expect maybe at least a few songs for the dollar price tag. I’ve never been too picky about repetitive music as long as the gameplay is still challenging, but a single techno-beat song thumping away over and over and over again is going to get on most peoples’ nerve. Another big improvement would be to have some sort of visual distinction between the levels. Currently each level has the same jump pads, same spikes and same little black lump of a protagonist. A little variety would go a long way to improving Give It Up!.

One very fun thing about the game is that it insults you. Depending on how far you get into a level, you might be a victim of some trash talk. Dance Dance used to do something similar. If you were doing very poorly the game announcer might break through the music to ask you if you are a monkey or some other taunt. If there is one thing this game excels at, it would be that any time you die before around 30%, you are going to get some smack served up. Now, most of the time it is goofy, but for as hard as the game can get, you might just end up getting real mad. So if you are a device thrower, you might want to be careful with this one because there is a high chance of frustration and insult.

Give It Up! is a few updates away from being a very solid game. It runs perfectly on my iPad 3 and the timing response for this rhythm game seem right in step with the music. More variety visually, audibly, and via gameplay would be my biggest wishlist item. If you can handle some monotony and some insults, this game might strike a chord with you.