You know, I’ve had a lot of people ask me why I cover every single one of Kemco’s RPG releases. They’re a big time sink to play and few people seem all that interested in them until they’re on sale for $0.99, at which point people tend to buy them blindly without even knowing or caring about their merits. Sometimes, I even ask myself if it’s worth the bother when I could be working on other things. Then, a release like Shelterra The Skyworld ($3.99) comes along and totally clarifies why I started writing about these games in the first place.

At first glance, Kemco games appear very similar, and it’s hard to read much into the meager information provided in their App Store descriptions. That leaves a lot of people thinking one is just as good as the next, a belief that Kemco has nicely disproved with the back-to-back iOS releases of Asdivine Hearts ($7.99) and Shelterra The Skyworld. There’s a staggering gap in quality between Kemco’s best and worst RPGs, and that’s why I want to carefully take apart and examine each one of them. Because, my friends, friends don’t let friends waste their coffee money and coffee breaks on dreck like Shelterra. 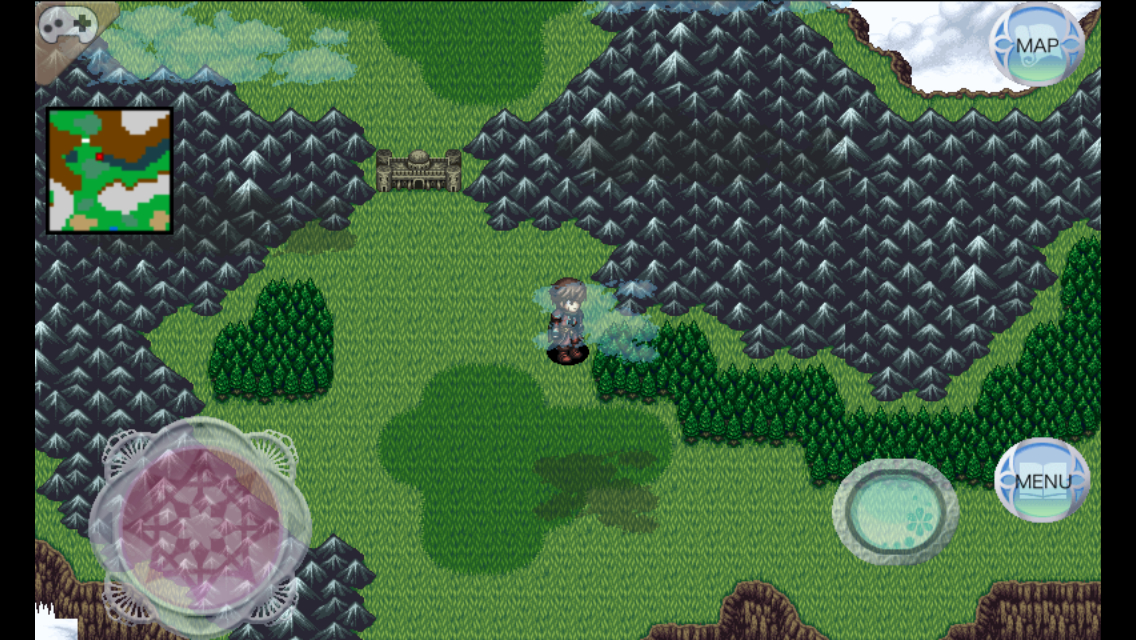 To be totally fair to Shelterra, the game released several months ago on Android, and it comes from a different developer than Kemco’s recent stronger titles. Of course, it also came after many other better Kemco releases, and this developer has certainly turned in higher quality work than this. Not much higher, mind you, but the Magitec-developed Chrome Wolf ($7.99) ran circles around this. Shelterra suffers from the usual weak points of a Magitec release. The dungeon designs are awful, forcing you to backtrack and wind around passages for “treasures" you could buy with 1/5th of the money you earned from one of the four or five random battles you encountered on the way. There’s liberal use of trap floors, as usual, and a cheap consumable item sold in the shops to nullify them, which basically makes them busy work. The characters are horrible cardboard cutouts, speaking in awkwardly-translated English as they bumble their way through a serviceable plot. The same old gameplay engine has been brought out here once more, and its choppy animation is like a bucket of ice water down the pants after playing the smooth Dragon Quest 3 ($6.99). 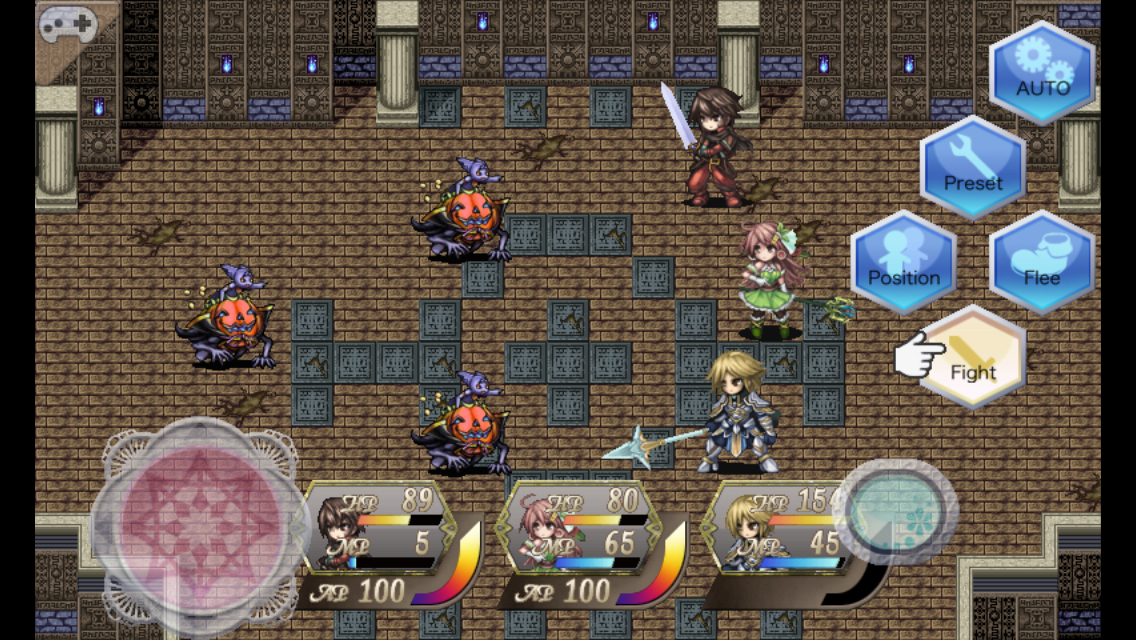 There are a few more issues on top of those same old ones, however. Magitec’s last few games have had something resembling a job class system that, while rough, was pretty enjoyable to play around with. Not so in Shelterra, where your character’s abilities are randomly learned from enemies and follow no real pattern. At best, you can equip an augment to your character’s artifact that increases the odds of certain types of skills being learned. The only way to know which enemies offer which skills other than dumb luck or dogged repetition is to pay off a guy you’ll find in the towns using your hard-earned money. Even with that sorted, you’re at the mercy of fortune as to how many battles it will take to actually learn the skill from that enemy. Of course, you can lubricate your chances a bit with an item from the game’s IAP points shop.

Kemco’s been doing a somewhat similar system for IAP in their RPGs for the last while now. They’ve had missteps on the way but this year especially, they seem to have settled on offering cheat items as IAPs rather than significant content like characters or story dungeons. Shelterra feels a bit different. There are two bonus dungeons you can unlock with points. One is a challenge dungeon that you can’t ever actually permanently unlock. Instead, you buy tickets that let you try it once each. The other dungeon is a story dungeon, expanding significantly on the main character’s back story. You can earn the points in-game by defeating certain rare enemies, but in an entire playthrough, I wasn’t able to amass enough of them to unlock that dungeon without chipping in a little cash. It’s not content central to the plot, but I can’t say I’m happy with this kind of thing. 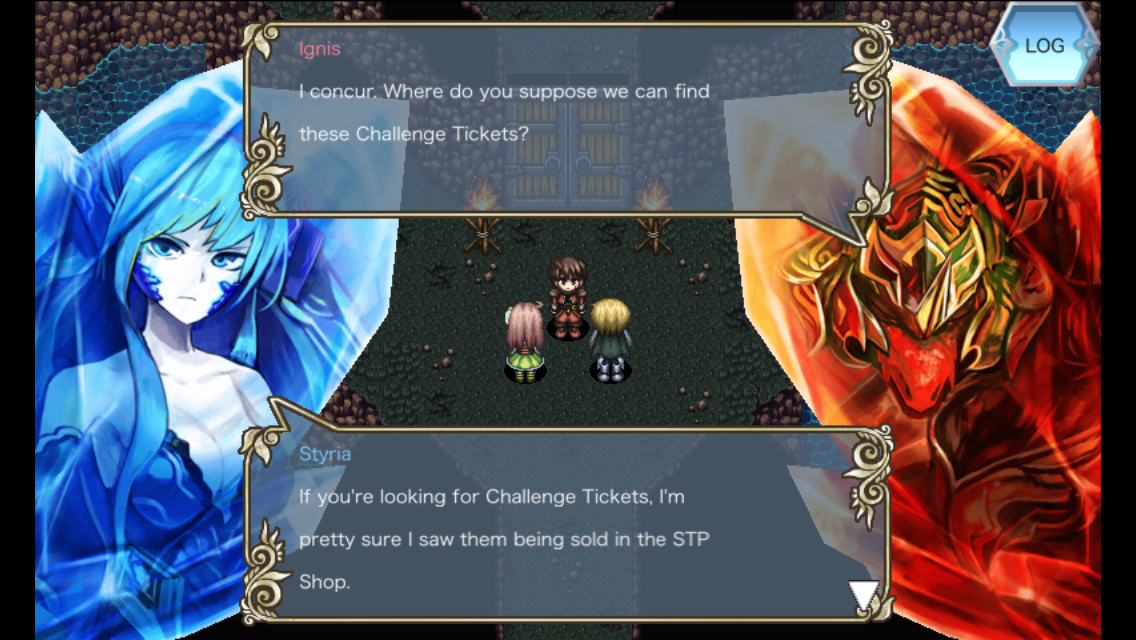 I briefly mentioned artifacts already, but I should probably elaborate since they are the game’s main gameplay hook, as well as being the axis around which the story turns. Each of your characters ends up connected to an ancient creature called an artifact that lives inside a stone. These creatures, who should not be confused for Final Fantasy‘s eidolons under any circumstances, can be summoned in battle to fight alongside you. They’ll attack on their own, but you can also give them specific orders to use skills and so forth. Using skills and attacks draws from a pool of points each one possesses, and when that’s empty, they have to go back inside their Pokeball until you build that meter up again. Basically, they’re for bosses. In terms of the narrative, they serve their purpose as snarky sidekicks and help flesh out the very light roster of the game.

That’s the only twist to the combat, which otherwise follows standard turn-based rules. You can attack with your weapon, use MP to deliver a special attack or cast magic, or block. The enemies are arranged in rows and columns that certain special attacks can target, but neither you nor your foes can move around as in other recent Kemco games. On the whole, the game is pretty easy, with little strategy needed to resolve most of the fights. The artifact augments are the only real input you have for customizing your characters, and there aren’t any particularly interesting sub-systems or anything in the game. There’s just nothing to chew on here at all. 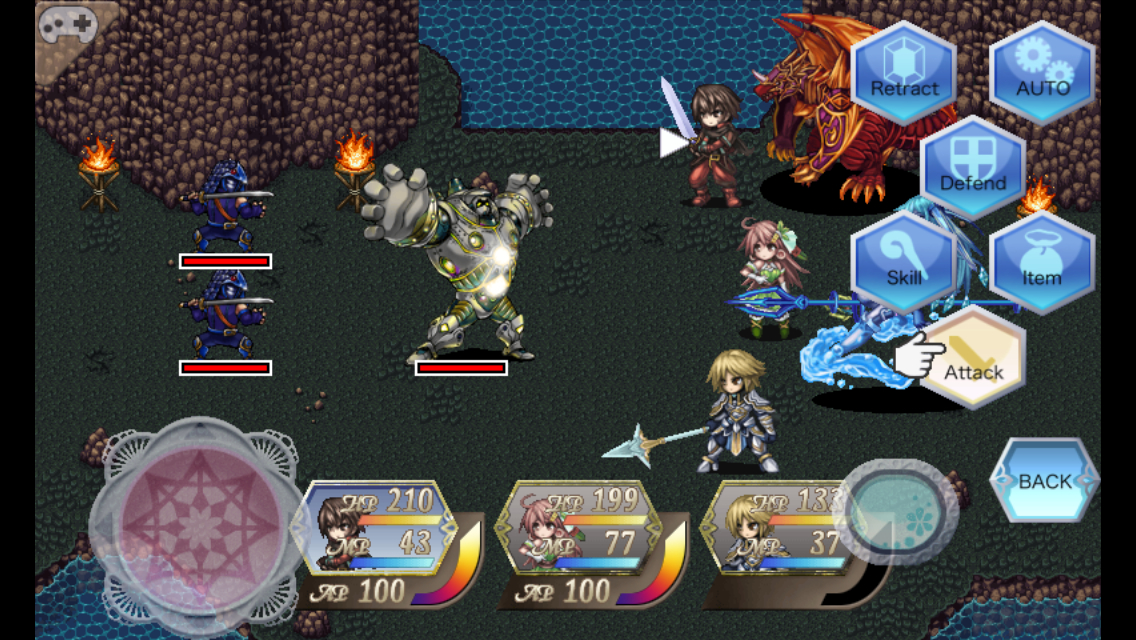 You’re left with a decent but altogether familiar plot, especially if you’ve played Magitec’s other games. That’s the only merit to the game, and it has to prop up weak characters, dull combat, a choppy, outdated engine, IAP shenanigans, luck-based character development, and an overall lack of anything interesting in terms of mechanics. It’s not enough, not nearly enough, and the whole structure just buckles and collapses into a pile of banality almost immediately. Maybe you’re bored enough to stick out the game’s 15 to 20 hours, but I certainly wouldn’t advise it. The juice is in no way worth the squeeze.

It might seem like I’m being overly harsh on Shelterra The Skyworld, but with all of the decent-to-great RPGs available on the App Store, weak efforts like these are really unnecessary. Kemco can do better and has, plenty of times. Magitec can do better. Most importantly, however, is that you, the player and the customer, can do better, and you should.