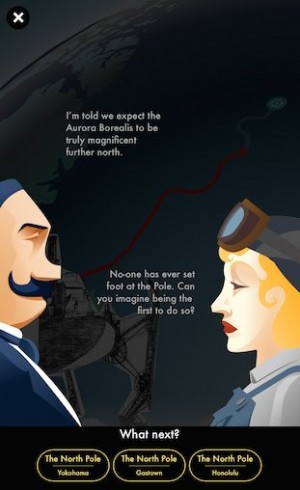 80 Days ($4.99) was a game we particularly dug, and has even gotten one Game of the Year award from an unexpected source, and was one of Apple’s best games of the year. Well, the globetrotting gamebook-inspired game from Inkle has just been updated with new content, featuring a new Arctic route that has opened up. This means that on your journey around the globe, you can now visit the northern reaches of Earth. The game is particularly dialogue- and story-driven, and this update skimps on neither, adding 30,000 new words of story to experience.

The update is rolling out now on the App Store. Inkle know their gamebooks, having produced the iOS ports of Sorcery ($4.99) along with this particularly expansive affair. This is a rather nifty game, and while it’s gamebook-inspired and very dialogue-heavy, it’s worth checking out as it’s got elements of roguelikes with its randomization through each session, resource management, and strategy. It’s also a gorgeous game. Even if it’s outside your comfort zone, it’s worth a look.