Proun+ (Free) is a game that probably should have been on iOS a long time ago. It makes too much sense, the tube racing, with its simple controls that are perfect for taps or tilts, its quick races, they all make for the ideal iOS game. That this is a port from PC to iOS just feels like it’s something well overdue. Proun+ is a tube-racing game, which I previewed last month. There’s some utterly brilliant aspects to this one, but also some things that make me curious about, to see if there’s not a way this game could have been structured any better. 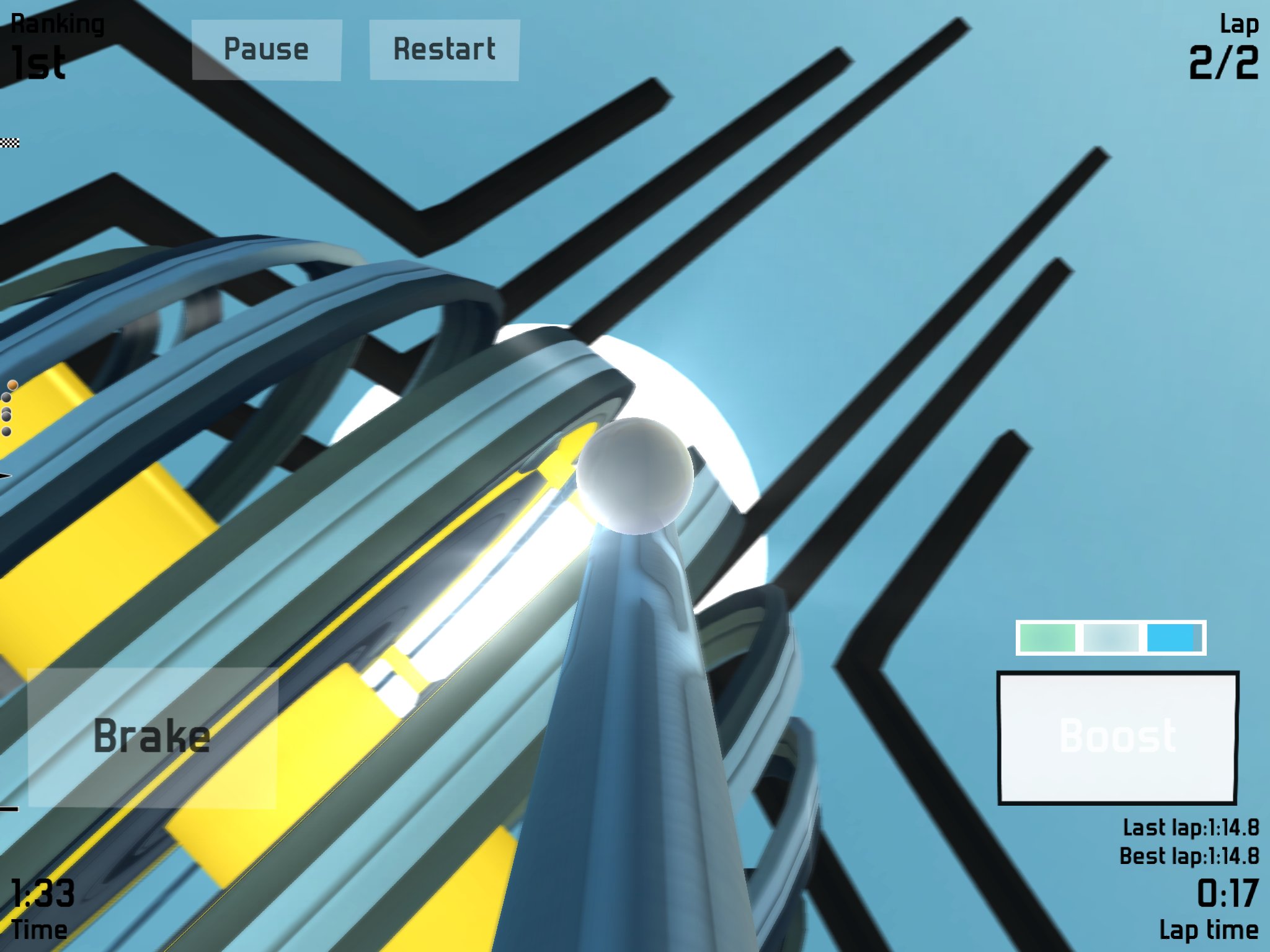 The racing takes place in a third-person view, behind the racing ball, which grants a wide field of view that makes seeing hazards quite easy. I imagine my times in Unpossible ($1.99) would be a lot better if that game was in third-person. This isn’t a game of reactions to unexpected stimuli, this is about learning the courses, trying to make the proper turns without crashing, and even not turning so much in order to not slow down, when speed is a factor.

There’s a load of content here. There’s the 30-plus levels, which are spread across the 5 difficulties. The game does lock the later 3 difficulties, with the first two speeds available, until all regular levels are beaten, though this doesn’t include the bonus levels. They’re truly just a bonus. I would like to see iCloud support added in because there’s such a barrier to progress for later levels. Also because I want to see iCloud in every game if possible. It’s often because it’s technically difficult to implement reliably, unfortunately. But still, I want to play this on my iPhone and my iPad! I’d also like MFi gamepad support – analog movement would certainly be welcome, though I never felt like the game was inaccurate with just single taps, but again, it wouldn’t hurt. I do like that the game has a left/righty flip for the brake and boost buttons. 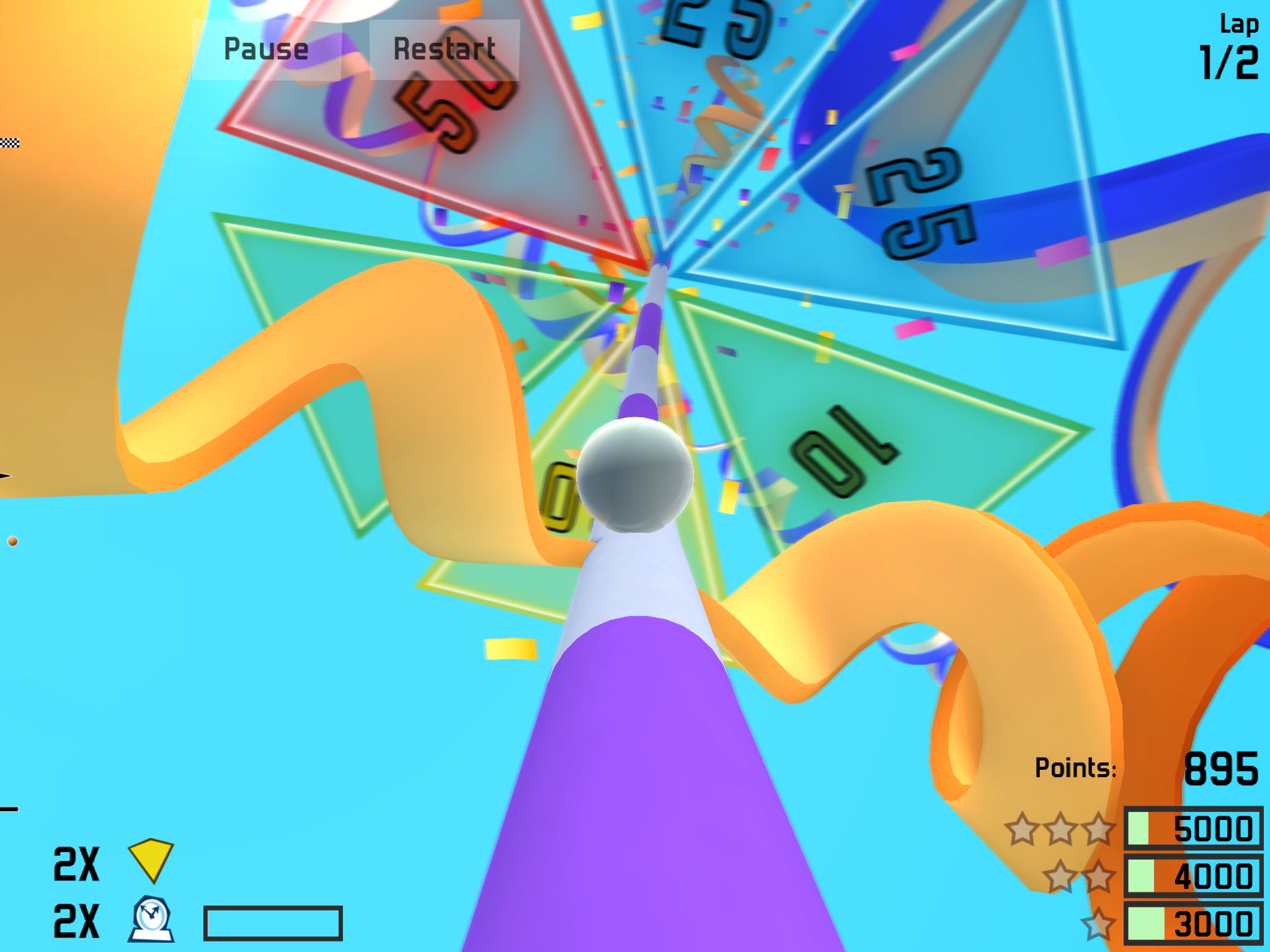 Visually, the game looks great…on low visual settings. Hear me out on this one. The game has this odd blurring effect at times when visuals are set to high in the settings, and this is on both the iPhone 6 Plus and iPad Mini 2 which I own. I’m not sure which devices can play this game on high visuals, or if this is a bug, but I prefer low visuals. Maybe the blurring is intentional, but it looks ugly to me. Beauty is in the eye of the beholder, but I report, you decide. Otherwise, stylistically? This game can look so gorgeous, it’s unfair to other games. Also, the game mutes external music, which is a problem because while I don’t dislike the soundtrack, I also get tired of the few tracks that are in there. And sometimes I want to race to the sounds of Rush’s Moving Pictures, is that a crime? 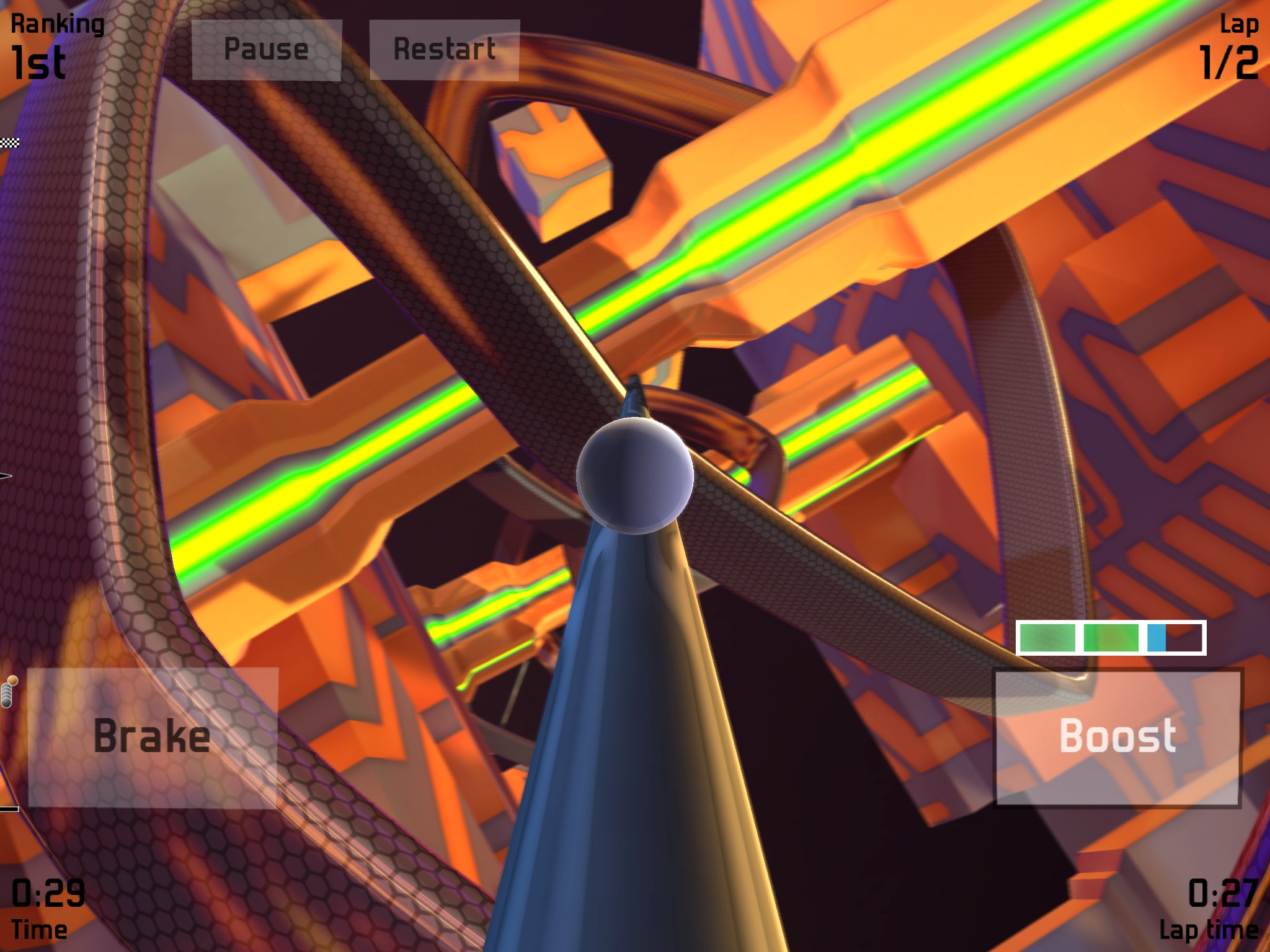 Other games have been accused of copying the original Proun – Unpossible ($1.99) has been bandied about as one of those – but really, Proun+ stands out by having a radically different structure. While there are survival levels, the game is so much more about learning tracks and the right moves to make within them, versus coping with unknown hazards. There are survival levels, but they’re a small chunk of the Proun experience when so much is built around the racing, and the clever score-based levels. Certainly, other games are similar in play, but structure matters a lot more than people realize.

As well, Proun+ is tolerant of faults – as a racing game, it has to be, though it punishes for each one. But it’s also the boost system that plays a huge role. Each segment of the boost meter fills up with clean racing. So, it becomes very important to not hit anything, to not be reckless, but to not hit obstacles. However, it is possible to scrape some objects lightly, which just prevents the gaining of turbo. As well, it’s key to use turbo boosts without hitting anything to get the maximum benefit. So really, where other games boast similar gameplay, Proun+ truly is more of a racing game take on tube-running or whatever you want to call this type of play. 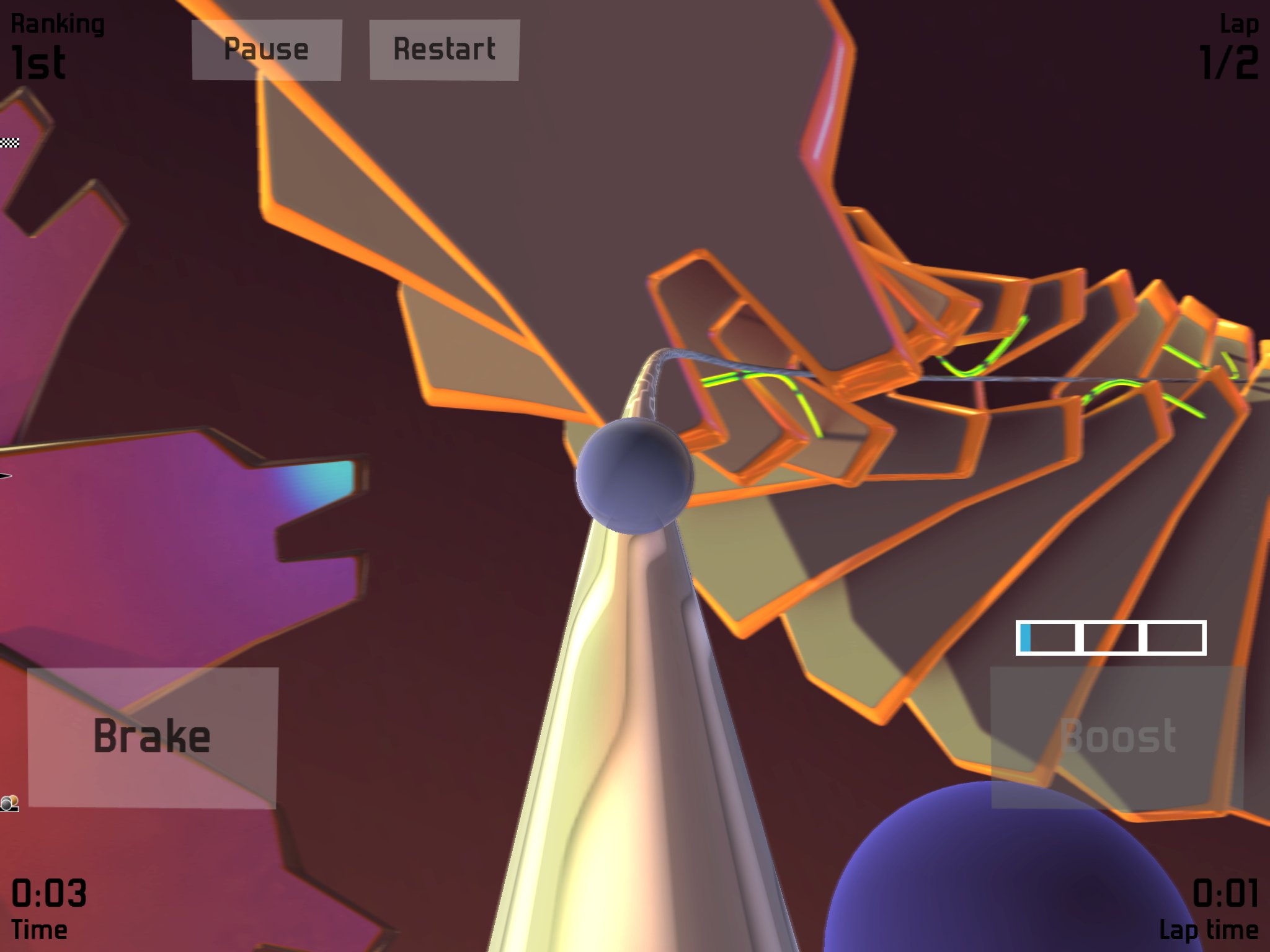 But honestly, it speaks to Proun+‘s inventiveness that pretty much any of its sub-modes could populate a game all to itself. The points mode in particular requires performance and strategy. Sure, that 100 point gate is valuable, but is it as valuable as consecutive 25 point gates with the combination bonus? Learning the tracks and where the different gates are, and then making the turns to get to them is pleasingly challenging. If each track were based around that, it’d be a solid game. Racing on its own wouldn’t be inventive in structure, but the game does feel a lot different than most racing games out there, because, hey, it is an art-inspired tube-racer. And its survival levels, because they do take place on fixed tracks, is itself a unique structure, as even though Unpossible boasts fixed daily levels, these are a beast in and of themselves.

Interestingly, I almost wonder if the game would be better if it was specifically structured into these various modes? The issue I have with the progression is that it’s possible to hit a wall with a level or two if you get stuck, and can’t go any further. And it makes certain game modes a requirement to progress, rather than fun things to do. They’re hardly torture, sure, but I would like to play this game with a much different structure in terms of how I play the different modes and when.

Proun+ is an interesting game for many reasons, and racing fans, as well as anyone who likes tube-racers, tube-runners, whatever you want to call them, ought to give it a a shot.