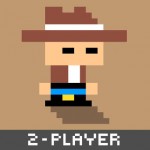 The advent of touch technology has created a vast number of innovations that weren’t really evident upon release.  While many are quick to damn virtual controllers and the like, one of my favorite things about mobile platforms is the sheer lack of physical controls. For certain games that need precision it can be a pain, but for titles that are custom-created for touch controls it’s a dream to just pick up and play something. One avenue that I don’t think gets enough love is the multiplayer on one device market. There are a decent amount of board games and asynchronous titles out there that support multiple people, but Micro Battles (Free) does a decent job of adding some arcade action into the mix.

Micro Battles is extremely upfront about what you’re getting. Every day, one of four minigames will randomly cycle through a roulette wheel.  If you’re running the free version of the game, you’ll only be able to play that one zone — if you pay a nominal fee ($1.99), you can upgrade to the full version and play any minigame whenever you want. In other words, you don’t really have much to lose if you get the free edition and mess around with it for a few sessions to get a feel for the experience. 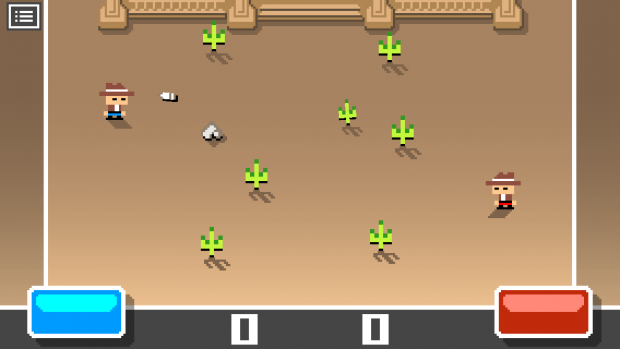 The entire game must be played with two people — no exceptions. All four themes have very simple controls — basically, a one-button tap — that adapts to whatever game you’re playing. The touch-box is essentially on each end of the device, length-wise, making it easy for two players to squeeze in, even with less screen real estate. The visual style is also zoomed out a bit giving you ample areas to put your fingers without blocking your view.

First up on the list is the Viking axe toss. In short, two platforms are constantly moving back and forth, each with a player character on them. By tapping a single button on each side, each player can throw their axe at various speeds, depending on how long they press the button. If one player throws their axe, they can’t throw another one until their opponent also makes their move. It’s an interesting game of chicken for sure, and although there isn’t much to it, I quite enjoy the old school Mario aesthetic with the lava below the battleground and the axe physics. It’s definitely one of the better games even if it isn’t engaging for more than 10 minutes at a time. 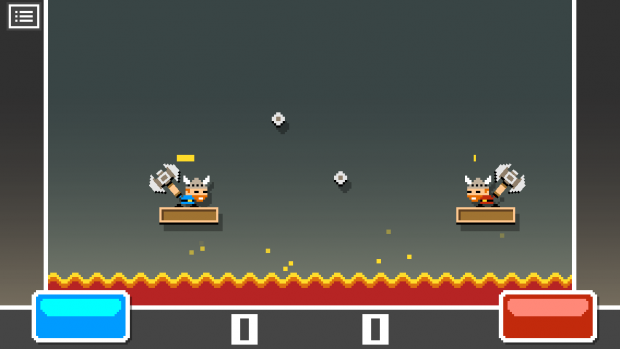 The next is a cowboy shootout, with randomly generated cactus in the middle blocking shots. Just like the Viking game each player must shoot before another round of shooting resumes. Both player characters are constantly walking up and down now, but there’s more control compared to the Viking game, as you can change directions by tapping the shot button if you’re out of ammo. Similarly, it’s enjoyable for 10 minute bursts but no more.

The winner of the pack is the plane fighting game, which allows you to gain momentum and height by pressing your button. The catch is once the plane takes off, it can’t land or touch the ground, lest you explode and lose a point. All along the sky are bullet power-ups to grab, adding another dimension to the proceedings. This is the best minigame because it has multiple layers of strategy despite the fact that it only has one button. The overall package would be much stronger if every game was like this. 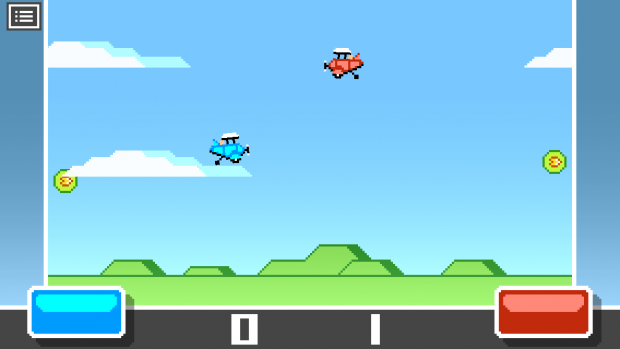 Lastly,  soccer is the worst game in Micro Battles. You control one character, which constantly spins around until the button is pressed — at which point they’ll walk forward. The controls are extremely unforgiving, and there’s nothing special about the minigame at all. You literally just walk towards a ball and hope to kick it in your opponent’s goal.

Three out of four isn’t bad though, especially given the low pricepoint and free demo style structure of Micro Battles. After buying the whole shebang I ended up playing the plane game more than most, and the other two shootouts are good fun in spurts. With more games this could be a must-buy for those of you have a friend to play with. Just temper your expectations.