Cosmic Crown (Free) is just an undeniably cool game. It’s a roguelike, particularly in the vein of Hoplite ($2.99) where there are occasional upgrades after levels to improve oneself with. But the uncommon twist about the game is that it’s entirely one-dimensional, literally. The only movement is forward and backward, with traps, enemies, and slowly-opening doors serving as the things standing between the green protagonist and those sweet cosmic crowns. 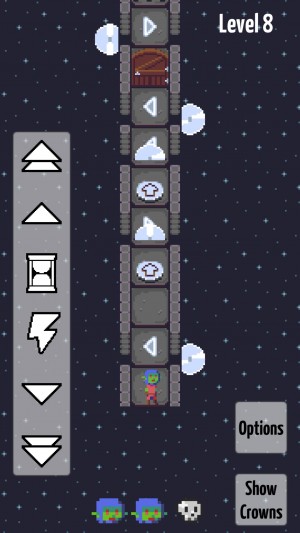 For a game that has just one-dimensional movement, it’s not a shallow game at all. This is because of the dash and disrupt abilities. The dash serves as a handy way to bypass traps and skip past the sentinels, but it has a short recharge time to deal with. Disrupting can be extremely helpful, but has a long recharge time, and can lead to being trapped if not careful. There is waiting, but things like the sentinels, and forced-movement arrow tiles make everything a threat.

The game thus makes every move require careful consideration, because there’s so many dangers. Getting in the rhythm of how the various traps work at any given moment is key. One miscalculation is often deadly, and calculating that proper thing to do gets more complicated as threats increase over time, and the dark crowns start getting collected. But Cosmic Crown remains accessible because the number of inputs is so simple, there’s only six things to do at any given time: go forward, go backward, wait, dash forward, dash backward, use disrupt. 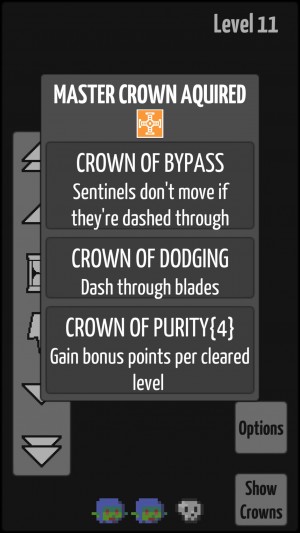 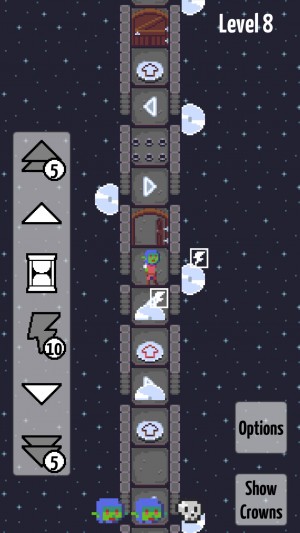 Strategy comes into play with upgrade choices. Go for the enhancements to dashing and disrupting? Having the dash recharge after a disrupt is extremely handy, especially when avoiding the sentinels. But then there’s also the purified crowns which grant a scoring bonus to those going for high scores.

Cosmic Crown is a wonderful mobile game, in that it is built around short sessions, but is also playable with just one hand. This is perfect for the bus or train commuter in particular, but it allows for casual play. Though,that’s maybe not ideal, but with the turn-based nature of the game, it means the game isn’t rushed. Plus, the concept is just perfectly built for coming back again and again. The game starts off just easy enough that it makes later levels seem conquerable. It’s very accessible, especially with the three lives, yet very challenging.

The controls of Cosmic Crown are not perfect, in that the game is built around one-handed play, but requires switching between lefty and righty support, as the action buttons are on one side, and menu buttons on the other. While this winds up working for our new world of large iPhones in that it puts all the buttons within thumb’s reach, it does mean that it’s not very adaptable to one’s current situation. I’d rather have support for an ambidextrous mode where the buttons are on both sides, and the menu buttons out of reach, as I’m not so concerned about having them be accessible at a moment’s notice. 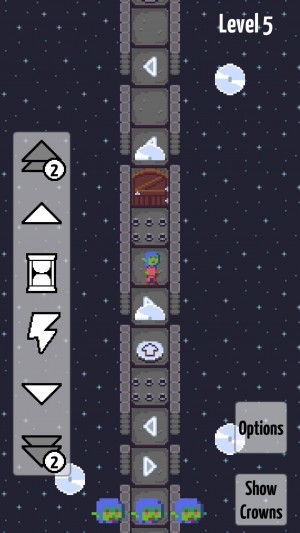 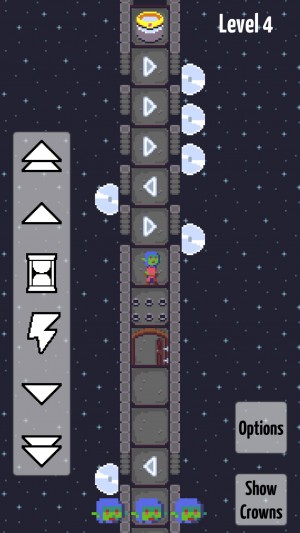 I wish there was some explanation for the scoring beyond that it’s possible to get more points by choosing purity crowns instead of. Do I get more points for not using abilities, or is it just based on survival and purity crowns? As well, I think the premise of having 3 lives, but the level regenerating on respawn feels like it might have worked better if the level stayed the same after each respawn, in order to have that forgiving gameplay, or just one life, for roguelike permadeath purity. The current mode just feels like a compromise. It’s not awful, and maybe it works best. Also, the dark crowns which provide random drawbacks? I wonder if perhaps having a choice like with the upgrades would make it so that the game is more consistent, as some of the effects may be worse for a play style than others, and the game is otherwise consistent in terms of rewards and introduced hazards up to that point.

Also, the interface feels a bit out of place with the pixel art of the game. It could use a more pixelly look to feel like it’s in line with the art of the actual game. Right now, it’s just jarring as the text and interface elements are all clean and smooth, but the game itself has this chunky pixel art look to it. Something has got to give, and pixel art is generally easier to create, so I want some pixel text and buttons to come to Cosmic Crown.

Cosmic Crown is definitely imperfect, but it’s still just this really cool concept, and a game that I’ve found myself coming back to again and again. The things that work really work, and most of the flaws are minor annoyances at best, nd things that could be fixed at some point. This game feels really like a gem that could go underappreciated. Go and pick it up.