Up-front disclaimer: I hadn’t played or even heard of Ms. Particle Man ($1.99), the game this is a sequel to, until about a week ago. It was apparently released in late 2012, so I was probably busy building my deluxe shelter to protect myself from the impending inevitable apocalypse, which appears to be rather late at this point. I wish I had discovered it sooner, but I’m glad I finally did, even more so because I’ve found it by way of its superb follow-up, Mr. Particle Man ($1.99). It’s an unabashedly old-school experience that manages to make use of a few modern tricks, one of which I’ve never seen implemented in quite the same way before in an iOS game. Fair warning: Mr. Particle Man is one of those tough as nails games where you’ll die, die, and die some more, and it’s very possible, likely even, that you’ll hit the limits of your own skill before the game is finished. If you’re the sort that gets frustrated by games like that, move along with your sanity intact. For the rest of us weirdos who meet such adversity with laughter and an insane need to keep playing, what this game does is going to be a nice, comfortable fit.

The game makes no bones about its inspiration. It’s a stage-based action game that borrows presentation cues from games like Pac-Man and Bubble Bobble. Each stage consists of a single screen, and you generally have two things to do on each board. First and foremost, you’ll want to reach the exit as quickly and safely as possible. Mr. Particle Man is destroyed by a single hit from anything dangerous, setting you back to the beginning of the stage while your bonus counter continues to decrease. You’ll also want to pick up bonus particles on the way for extra points. For the most part, reaching the exit is a reasonable challenge, but doing so while collecting everything can be taxing. Of course, there are also levels where simply reaching the exit is going to take some effort. Every so often, you’ll face off against a boss. You’ll have to figure out how to deplete their life bar before you can move on. This all wouldn’t be so hard, except there’s a real trick to moving your character around, even when there aren’t any obstacles or hazards getting in the way or pulling you in one direction or another. There usually are said obstacles, however. 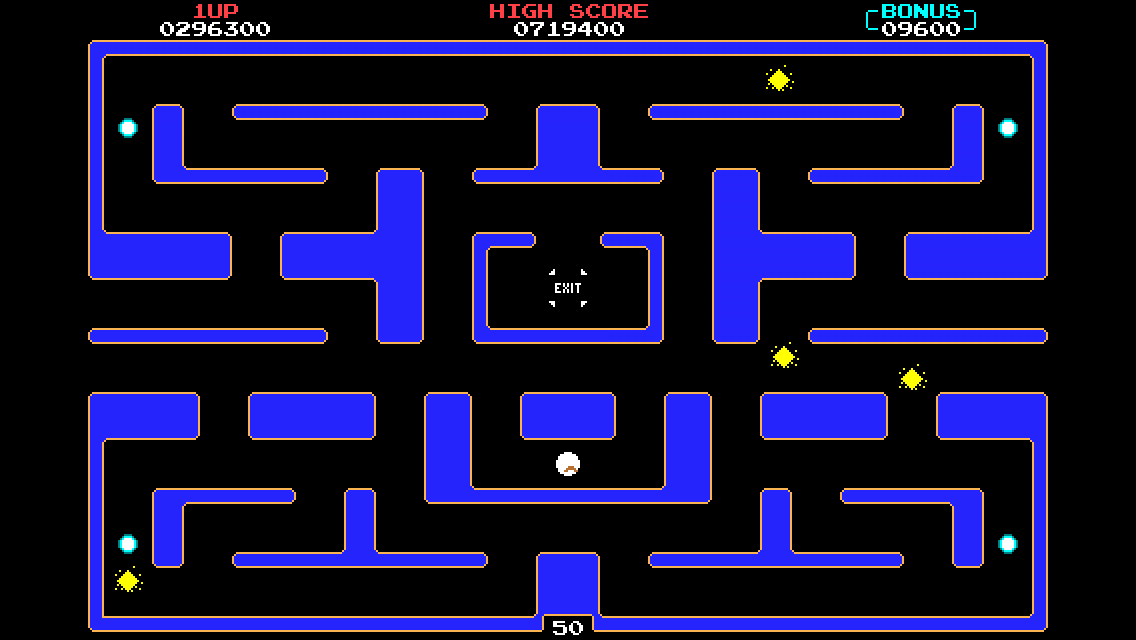 Basically, you swipe or touch relative to where the main character is to get him moving in that direction. He has considerable momentum to him, so you need to be careful you aren’t going more quickly than you can handle. You also have to make sure you don’t keep your finger off the screen too long, because if you do, he’ll explode. This gets very tricky in stages where fields prevent you from guiding Mr. Particle Man, as you have to make sure you have the right speed and angle to get him through that area without wasting time. You’ll eventually earn the ability to do a standing dash by holding down on the screen for a few seconds, a vital technique to master for general use. You’ll frequently come across objects in the stages that will attract or repel your character, and split-second timing is an absolute must almost all of the time. In the early stages, where you have huge margins for error, it’s very easy to move your character around, but as corridors get tighter, obstacles get faster and deadlier, and paths get more labyrinthine, you’ll need to learn how to control Mr. Particle Man with surgical precision. A great deal of the enjoyment in the game comes from developing this mastery.

Mr. Particle Man has over 100 stages, or so the App Store description says. I can’t verify that first-hand, as there are only two people in the world who have finished the game at the time of writing this review, and I’m currently quite stuck on stage 60-something. I feel no sense of shame about that whatsoever. There were numerous earlier stages where I really thought I wasn’t going to be able to pass, only to come back later and clear them, through sheer, dogged persistence. I always wanted to come back, too, since this game is just great at making you feel like you’re making progress within a stage. You always feel like you can do it, and that the end is within your grasp. That’s a sign of excellent level design, in my opinion. While there are a few clunkers, I’ve been overall quite surprised at the variety and cleverness of the various stages. For example, it generally presents new obstacles in a minimum-threat situation before tossing them out in increasingly vexing scenarios. Importantly, the game’s bag of tricks is deep enough that it never feels like the game is repeating itself, in spite of its large stage count. 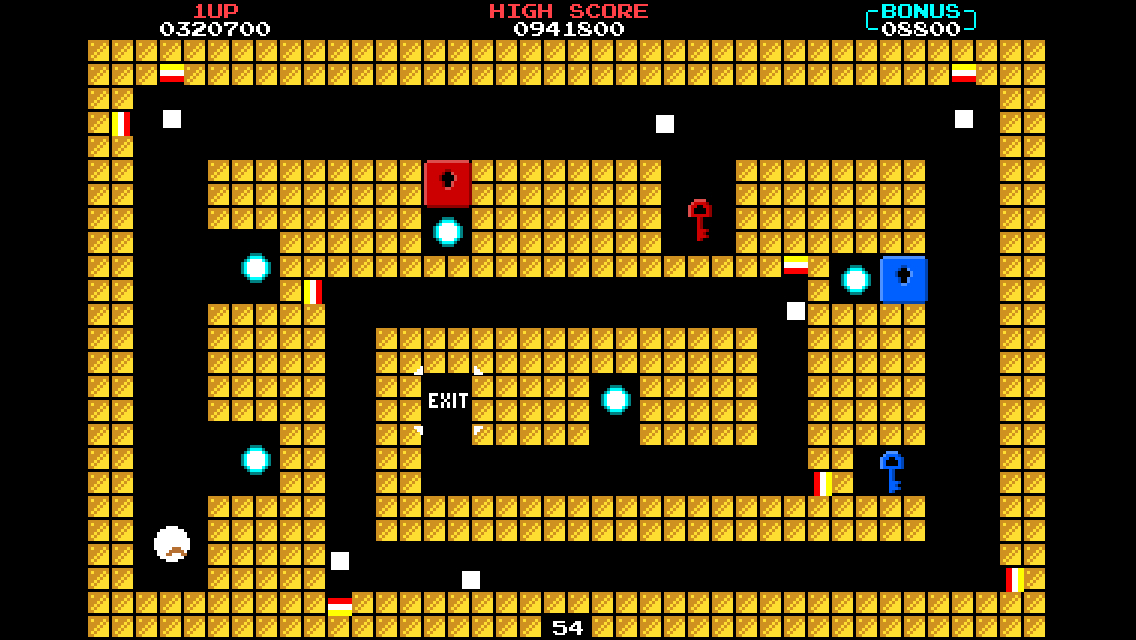 Speaking of tricks, Mr. Particle Man takes a good one from the Souls series of games by From Software. Using the game’s included Particle Board and your own Twitter account, you can post brief comments about the level you’re currently playing. When someone dies on that stage, they’ll have a chance of seeing whatever comment you wrote, so you can do things like leave hints, warn other players, or just scream into the abyss. An approval system keeps it from getting dirty, so keep your frustrations PG-rated. As it does in From’s series, it lends the game a feeling of community even when you’re playing by yourself. You’re not alone, it reassures you, and that little bit of encouragement that someone out there has banged their head against the same wall is somehow soothing. It’s a very clever and modern addition for a game that otherwise has its feet planted in the 8-bit era.

That sensibility goes all-around for the presentation, specifically aiming at the earlier 8-bit era visually. Its choices of colors, fonts, and even fill patterns on the walls feel very authentic in a way many games that attempt to evoke the era fail to do. The music is just dynamite, with the soundtrack composed of several chiptunes. There’s a real texture to the music, for lack of a better word, evoking other fantastic faux-retro soundtracks like Kero Blaster ($5.99)’s. The presentation is rounded out with Cloud support, five Game Center leaderboards, and a small, challenging set of achievements. Simply beating the game will give you plenty to chew on, but should that become mundane, you can at least compete with others to see who can rack up the highest score. 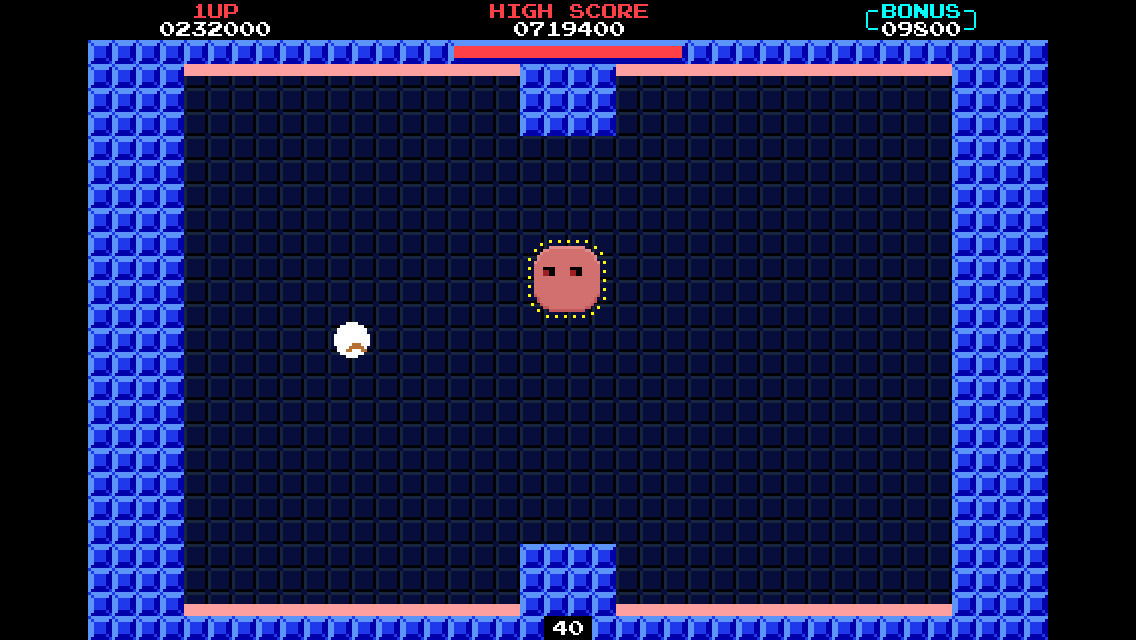 I’m sure plenty of people are tired of faux-retro games, super-hard action games, and perhaps the combination of the two as well, but Mr. Particle Man is a very, very good one. It has excellent level design, controls that just feel good, and a huge variety of gameplay twists. The visuals and audio are pitch-perfect for what the game seems to be trying to evoke, and the Particle Board idea, though clearly inspired by another game, is a sound one that fits the game well. As long as you have an abundance of patience and a good sense of humor about setbacks, there’s no reason you shouldn’t adorn your finest fake mustache and give this game some of your time.