[appicon url="https://itunes.apple.com/us/app/id911006986?mt=8"]Bringing The Banner Saga ($9.99) to tablets gave John Watson nightmares. “This launch was even bigger to us personally than the original launch,” he explains. The Banner Saga was released for PC and Mac in January before making the jump to tablets early last month. “We’ve been working toward this for a long time. I was extremely excited about the launch, and getting it done was a relief.”

The Banner Saga is a rich, earthy role-playing game about a caravan of refugees: some fighters, a few archers, a handful of eight-foot-tall giants with horns, but mostly hungry mouths and frail backs. The caravan is on the run from the “Dredge," a stone-skinned race of reavers scouring the high-fantasy continent like locusts. As Rook, it’s your job to dole out food, make decisions, and keep your people safe. Violent conflicts—against roving Dredge or cutthroat brigands—play out on a checkerboard grid, where each fighter takes a turn, spends ability points, and hacks at his foes. It is a beautiful, poignant game, full of interlocking systems that hum along like clockwork, wrapped up in lore and legend that evokes Norse mythology and hard-packed tundra. 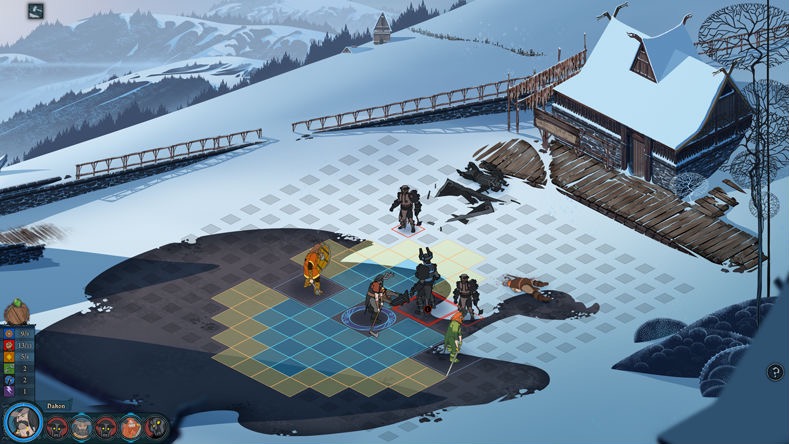 “The night before launch, I was just dreaming the whole night about bugs,” Watson tells me. He’s the technical director at Stoic, and Arnie Jorgensen, the studio’s co-founder and art director, estimates that he did 90% of the work needed to port the game.

“I would dream about some specific bug and then I’d wake up and my mind would be trying to solve it, and this would go on for hours and hours,” Watson says.

Sure, releasing a game on a new platform is always a big deal, but his anxieties suggest higher-than-usual stakes: The Banner Saga, specifically the idea of The Banner Saga on tablets, was the germinative spark that pulled Watson and Jorgensen away from big companies and, eventually, toward Stoic Studio.

Back in 2011, Sword & Sworcery and the iPad itself were revelations. “When the iPad came out, we saw, like, ‘Holy cow, there are some really interesting, deeper, artsy games coming out on this thing,’” says Jorgensen. Eventually, he and Watson made a decision: “You know what? We can leave behind teams of hundreds and actually make a living doing smaller-run games.”

Before founding Stoic Studio in 2012, Watson and Jorgensen spent 14 years working together on different Star Wars MMOs: first at Sony Online Entertainment (Galaxies), and then BioWare Austin (The Old Republic). Watson described big-budget development as “a cycle of crunch and pressure that we wanted to get out of,” and Jorgensen is much more direct: The Banner Saga is “why we created the studio, to do a small, tight, artsy game.” 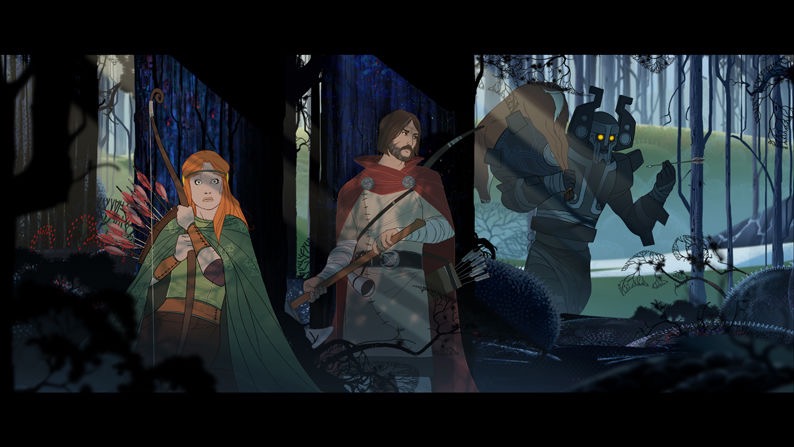 So, they did: Stoic Studio was founded in 2012, and Watson and Jorgensen start sketching out horned Varl and tinkering with turn-based tactical combat. The team initially developed the PC and tablet versions of the game simultaneously and, despite hardware limitations, had The Banner Saga running on the iPad 1 for months. The PC version eventually became a priority, but the months of building iPad-compatible prototypes left their mark.

“When we were developing the combat system, we went through a lot of iteration on how you move, how you lady down waypoints,” Watson explains. “And all of that testing we did was on little prototype apps for the iPad.” All of the questions about The Banner Saga’s turn order and movement, the nitty-gritty details that control all the steps it takes to send an arrow through a Dredge’s eye, were solved on a tablet.

“All throughout development, all of our user interfaces were designed from the ground up to work with touch,” says Watson. “We made all the buttons big enough, we had minimum sizes. We thought about this, we planned it.”

The iPad and the then-upcoming Retina displays also had a profound on the game’s vivid and lush hand-drawn art. “Right from the very first piece we did, we did a Retina display size,” explains Jorgensen. “We were shooting for the highest display that we knew would be available on the iPad.”

One of The Banner Saga’s enduring images is of vast, blighted hardlands, acres upon acres of frozen forests and craggy ice, dotted by a tiny, lost caravan. To get the intended effect the team turned to mid-century films. “We were shooting for an old-school cinema look, especially for travel scenes, so we chose the CinemaScope ratio, which is 2.35 to 1,” says Watson. The result is a wide-angle shot “that harkens back to those really big, epic productions. You see that in some really big David Lean movies, like Lawrence of Arabia,” he continues. 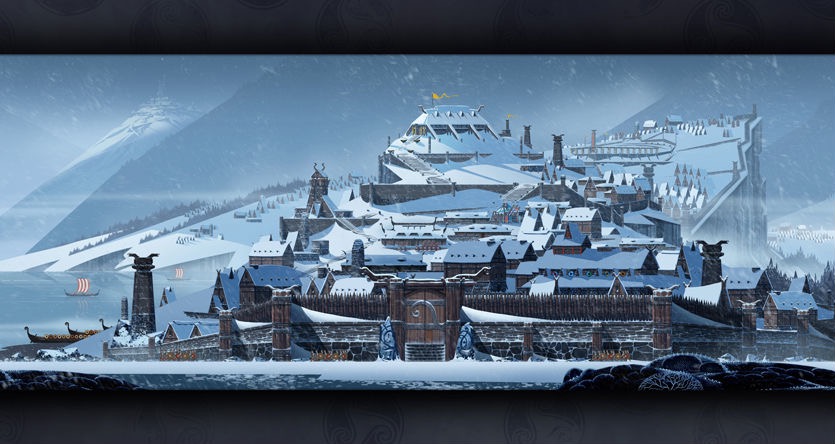 “So, if you had a Retina iPad that happened to be CinemaScope, that’s the resolution for the game. In hindsight, it’s a really strange decision.”

Maybe, but it’s part of what Jorgensen hopes will give The Banner Saga longevity as a series. “I think we have a [visual] style that’s somewhat timeless,” says Jorgensen. “It’s the old Disney, it’s Sleeping Beauty, and that look is never going to go out of fashion.” From the beginning, the goal was to combine The Banner Saga’s classic art with the newest displays to produce a game that had a “built in" future.

“We wanted the game to look viable and modern years from now,” Jorgensen says.

The Banner Saga was released for PC and Mac in January 2013—“I think the cold really helped,” says Jorgensen. “Everybody was playing it with a fire and it was snowing outside. It was just perfect.”—but it took nine months to make a mobile port of a game that had been running on iPads since the beginning of development.

That’s because The Banner Saga for tablets is probably the definitive version of the game, according to the guys that made it.

Watson says he had the game running on the iPad in two days, but after that came months of optimizations. The graphics renderer is brand new, the game has iCloud support, and the mobile version includes new animations along with tilting and pinch zoom functionality. “I would give it to people to test and I’d watch them, and they would try to do things like pinch zooming and tilting,” Watson explains. “I said, ‘Yeah, ok, we need to do that.’ Those are things that people just expect. We didn’t want to make a PC game on the iPad—we really wanted to make it fit.” 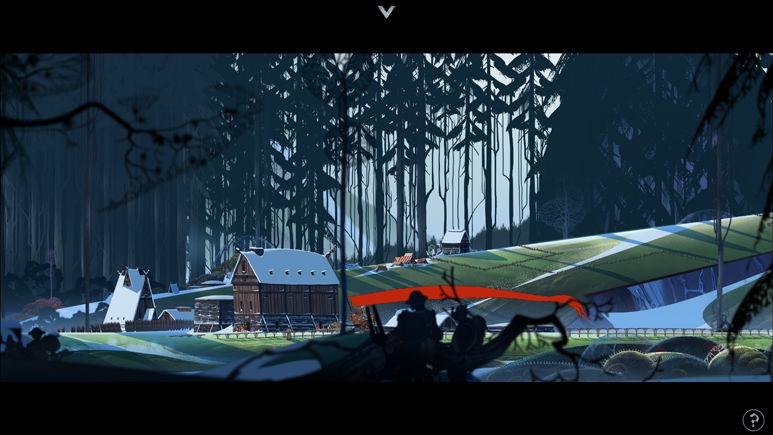 Now, tilting your tablet adds a parallax effect to the traveling scenes—which means that your traveling caravan scrolls faster than the background environment—and players can use pinch zooming to survey the entire battlefield or zoom in close to party members during combat.

The new visual effects and added features add up. “It’s a better experience on tablet now than you can get on the PC or Mac,” says Jorgensen. “There’s some really awesome functionality that we have on the iPad that we can’t wait to re-fit back onto PC and Mac. That’s the plan for right now.”

After that, it’s full steam ahead toward The Banner Saga 2, the second of three planned games. Jorgensen has watched hours of Twitch streams and Let’s Play videos on Youtube, looking for rough edges to smooth and mechanics to refine as Stoic begins working on the sequel. “I was completely addicted to it at one time,” he says. I would just lurk for hours and hours.”

One thing they noticed was that the game doesn’t penalize ruthlessness enough. “A cynical player at the end of the game might just decide, “Why am I saving all these people? I could be using these resources to upgrade my heroes and just let everybody else die,” Watson explains. “The story consequences aren’t noticeable enough, and they’re not motivating.”

“That’s a good example. Another is …”

Jorgensen cuts him off: “I don’t think we want to do any more examples. We’re going to be re-janking a few things, and I don’t want to say what they are.” 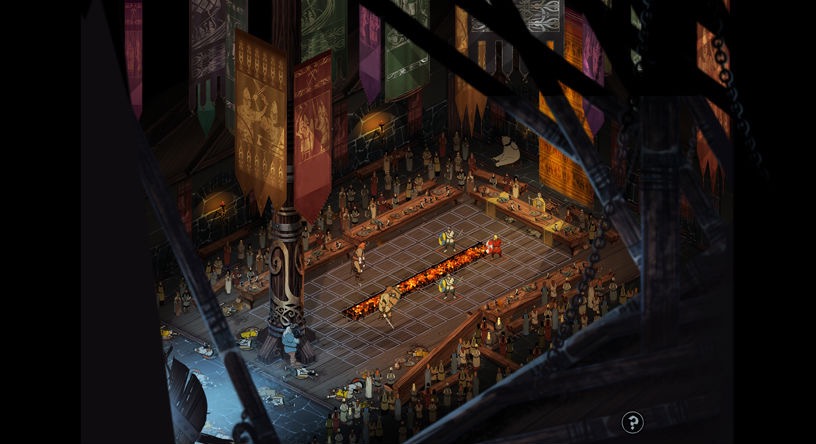 Still, the changes won’t be that drastic: “We want to keep the majority of the gameplay as it is, because that’s what people want more of,” Watson says. Fair enough, but The Banner Saga’s still-dangling plot threads and under-developed characters might also be fueling fans’ desire for more, an idea the two happily acknowledge.

“People really clued in on that,” says Jorgensen. “We wrote the whole arc of the story, we plotted it out, we know where it’s going to go. But then we had to break it up into three chapters because we couldn’t do the entire thing correctly with the amount of money and time that we had.”

Any changes to the mechanics that do emerge will feed back into the storyline and the expansive world of dead gods and doomed races, and even then they don’t want to tinker too much. “We want the whole series to feel like one sweep,” Jorgensen says. “All three games should feel like one continual game, without any hiccups between.” To that end, Watson and Jorgensen are working to make sure that players’ choices from the first chapter of The Banner Saga will carry over to the second.

“People like the game, we just want to round it out,” Jorgensen says. “‘We want more’ is not a bad complaint to have.”

Jorgensen is less understated when he talks about the response to The Banner Saga, a game 14 years in the making: “To actually strike off on your own, start a brand new game, and hope it resonates with a few people …”

“This experience with John over the past year or so has been over the top. I can’t believe this is happening,” he says. “There’s a lot of people that like this game, and that’s just a really good feeling.”

“The Banner Saga is very ambitious,” Watson adds. “People pour out their support, and they have such high hopes for your game, and it creates so much pressure. You want to please them.”

“It’s without a doubt the hardest thing I’ve ever done. I’m 40 years old and I’ve been working in games for a long time,” he says. “No matter how hard it is, it’s worth it.”