Imitation is the sincerest form of flattery, said Charles Caleb Colton, a man whose words are far more famous than his name. I’m not sure if that’s always the case, but I do believe strongly that it sometimes is. For example, when I was a young lad, I used to try to draw Spider-Man exactly the way Todd McFarlane did. His art was so exciting and cool to me that I would find my favorite panels and more or less copy them. That eventually extended to my original drawings of Spider-Man, with the big eyes and the bundly webs finding their way into those margin-doodles my poor teachers had to put up with. In my defense, McFarlane was pretty popular at the time. I was a big fan of the art, and I wanted to express that through drawing similar things. Never mind that they were poor replicas, they were sincere, innocent-minded odes to McFarlane’s unusual style. I think we see a lot of that type of situation in the game industry, since so many of today’s developers grew up blanketed in the hobby. Of course, we also see quite a bit of the less-innocent imitations that are less about appreciation of art and more about appreciation of money, but I think it’s safe to say that 2012’s Partia ($3.99), a naked homage to Nintendo’s Fire Emblem, is more the former.

It’s hardly alone in taking inspiration from Fire Emblem, as that series was incredibly influential in the Japanese market, spawning series like SEGA’s Shining Force ($0.99), Bandai’s Super Robot Wars, and Square Enix’s various Tactics-branded games. It’s a turn-based strategy RPG series famous for its stories involving warring kingdoms and politics, and gameplay features like recruitable enemies, mid-battle conversations, and permadeath. While its roots go back to the original 8-bit Nintendo Famicom in Japan, the world outside of that country wouldn’t see an official release until the seventh title in the series, the second Game Boy Advance installment simply titled Fire Emblem in the west. At least visually, it’s easy to see that Partia‘s developers came by the series the way much of the rest of the world did. The game’s appearance and even font choices are all informed by the Game Boy Advance installments, though the story is more in the direction of the Japan-only Genealogy Of The Holy War on Super Famicom. 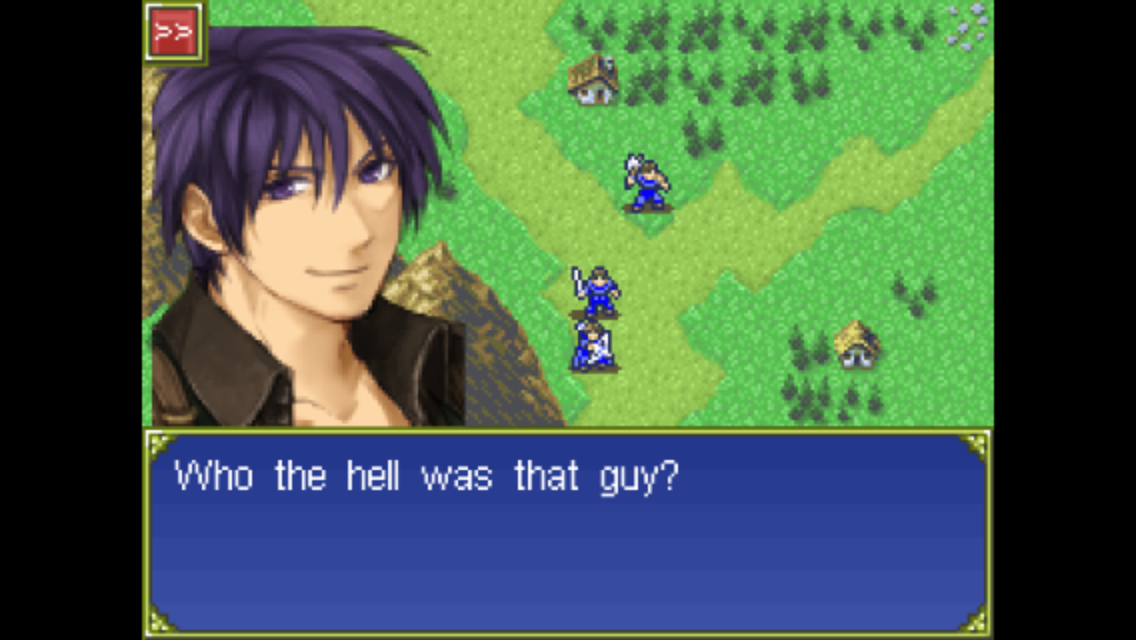 Much like my pained attempts to adopt McFarlane’s style, however, there’s something a little off about Partia. The weapon triangle from later Fire Emblem games is either not implemented or isn’t working right, the game does a poor job of telegraphing recruitable characters and who needs to talk to them, and the story flow is awkward and not assisted by generally rough English. The AI can’t live up to even the relatively rudimentary opponents found in Fire Emblem, and what is in my opinion worst of all, the game is slow in a way its inspiration hasn’t been for a very long time. Stepping outside of its status as a work of flattery, the game doesn’t hold up well to the standards of the platform, with a cropped screen and an overall low-res appearance which is admittedly very likely to be intentional. Some of these things are as a result of financial realities, while others just seem to be oversights or inexperience. Nevertheless, if you can look past its handful of shortcomings and keep its scope in mind, Partia presents vaguely similar feelings of enjoyment to the work it’s tipping its hat to. Nowhere near as good as Fire Emblem on its worst day, but it’s extremely similar and adequate.

I’m talking a lot about the first game here, and the reason for that is because Partia 2 ($5.99) is essentially the Sword Of Flame to Partia‘s Binding Blade. It’s a story continuation with a full set of new missions that makes few major changes otherwise, in gameplay or presentation. A lot of things have changed in the iOS market since late 2012, but you would never know it from looking at this sequel. The reasons for that are clearly stated in the App Store description, pointing to a lack of funds due to the weak sales reception of the original game. That would certainly explain a fair bit of why Partia 2 is here in 2014 carrying the same burdens its predecessor did, and it’s up to you as to whether or not you’re fine with that answer. Partia 2 seems to have only made it on a wing and a prayer, and I can appreciate at least that the developer has worked hard to finish the story they left hanging. It has to be a labor of love, because I can’t see this game doing any better than the first with a higher price tag and even bigger black borders for owners of current hardware. 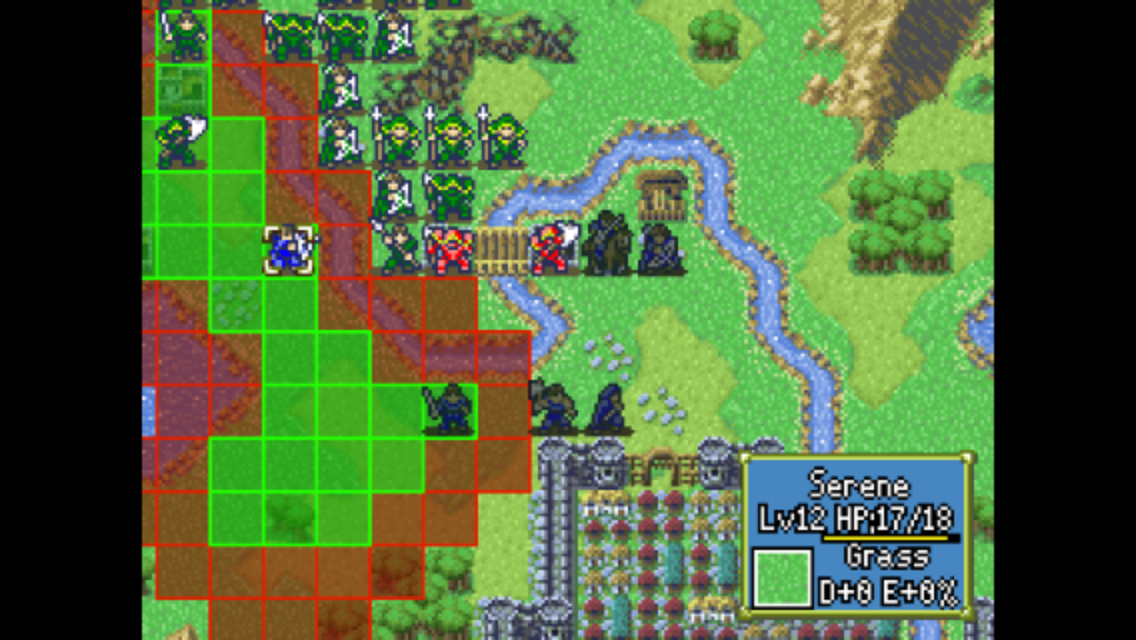 The major new gameplay addition is the implementation of an optional active turn system, inspired by Berwick Saga. If you turn this setting on, instead of the traditional system where each side moves all their units before the other side takes a turn, you’ll play a more chess-like system where each side takes turns moving one unit. Once you’ve moved a unit, you can’t move them again until you’ve moved all of your other units. I’m not sure if it’s bugged or something, because the computer often seems to be able to move two units to your one, which obviously isn’t to your advantage. At any rate, it certainly changes the flavor of the game, giving you a different way to challenge yourself if you’ve finished the game the usual way. Apart from that, the game plays in nearly-identical fashion to the first, which is a bit disappointing because certain things like the weapon triangle still seem to be negligible in effect.

The developer claims the game’s AI is improved, but I couldn’t notice it. It’s incredibly easy to herd it around and make it do whatever you want it to. The only threat it provides is in overpowering you on paper, but that’s easy enough to overcome thanks to its simple motivations. It’s very easy to sucker units in one at a time, pulling them into a death trap. I do have to compliment Partia 2 on its scenario and map designs, though. There’s a lot more thought put into the game’s 22 stages than was apparent in the original. Enemy unit placements and clever obstacles frequently make up for the AI’s inadequacy, providing a little bit of bite that keeps the game from becoming too dull. As always in games that include the feature, permadeath makes things interesting, since a slip-up can have great costs to your team if you actually live with your mistakes instead of reloading. Very few of the characters are developed to the point that you’ll miss their presence as personalities, but no matter how you feel about them, losing a valuable team member like a mage or healer is pretty bad. 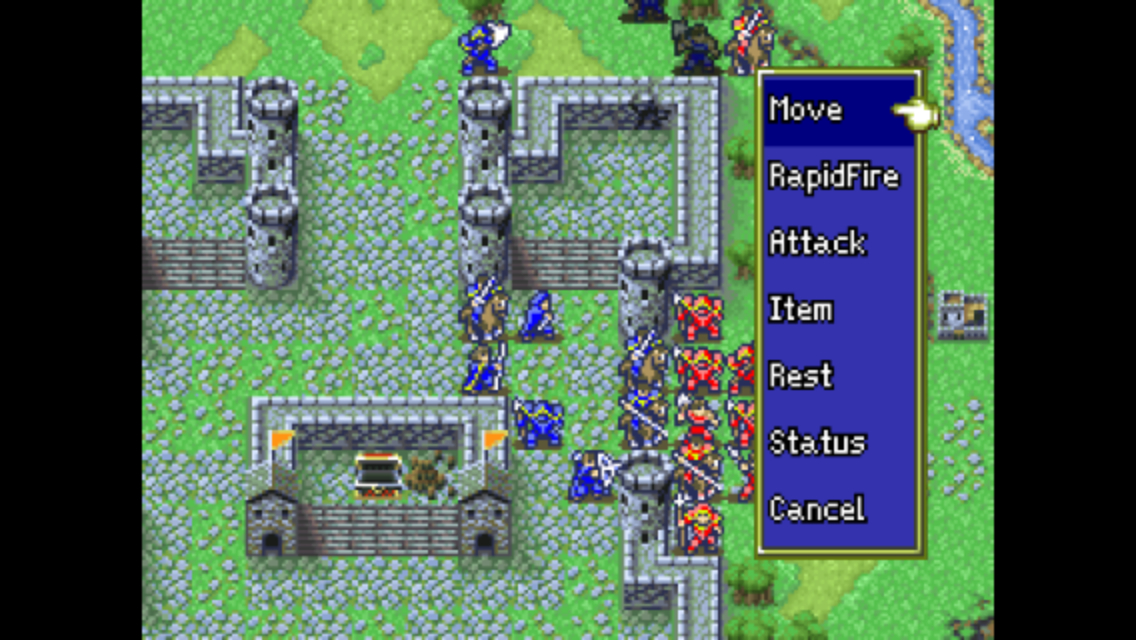 Between stages, you have a chance to visit shops to buy equipment and items, an inn to heal up any injured members or hire on new ones, and a pub where you can hear the latest scuttlebutt or opt to participate in an arena battle for extra cash and experience. You can also shuffle around any items or gear your characters are carrying. You’ll want to always keep spare weapons, because one of the ways this game differs from Fire Emblem in how often attacks miss, leading to swinging your weapon’s durability away far more than you should have to. This aspect of the game, carried over from the first, is one of the contributing factors to battles dragging out for far too long. The other, bigger issue is the speed of the computer’s turn. Fire Emblem is good about this, with enemies taking their turns very quickly, but not so quickly that you can’t see what it’s doing. Partia 2, like its predecessor, has enemies moving slowly, even on the fastest setting in the options. If there are also non-playable allies on the map, you might as well go fix a sandwich when your turn ends. There’s an early stage with a ridiculous number of enemies and allies on the map, which makes for a great effect that you rarely see in Fire Emblem with its limited numbers of units, but you’ll spend a lot less time playing than you will watching the computer play. I can’t help but feel this might have made a better cut-scene that played before handing over control for your small part of the fight.

The presentation is nearly the same as in the first Partia, which had plenty of room for improvement in that regard. The game still does a poor job of teaching you how to play it, so if you’re not already familiar with the genre, you’re likely to be very confused. The story aims for complex international politics but is told through broken English, which is not an ideal mix. It’s still using the same font, patterned after the Game Boy Advance default English font, and it’s still not a great fit for modern smartphone screens. The exciting animated battle scenes (that many people turn off after a short while) found in Fire Emblem aren’t in Partia or its sequel, but the small sprites on the battlefield have some pretty good animations that at least seem based on those scenes. The music fits in theme but in practice the pieces are generally too short to fit the lengthy battles, leading to repetition that may grind on your ears. There’s still no support for larger screen sizes, though you can play in portrait or landscape modes, so you can choose between bad controls or big, empty borders. The character portraits are better than they were in the first game, at least. 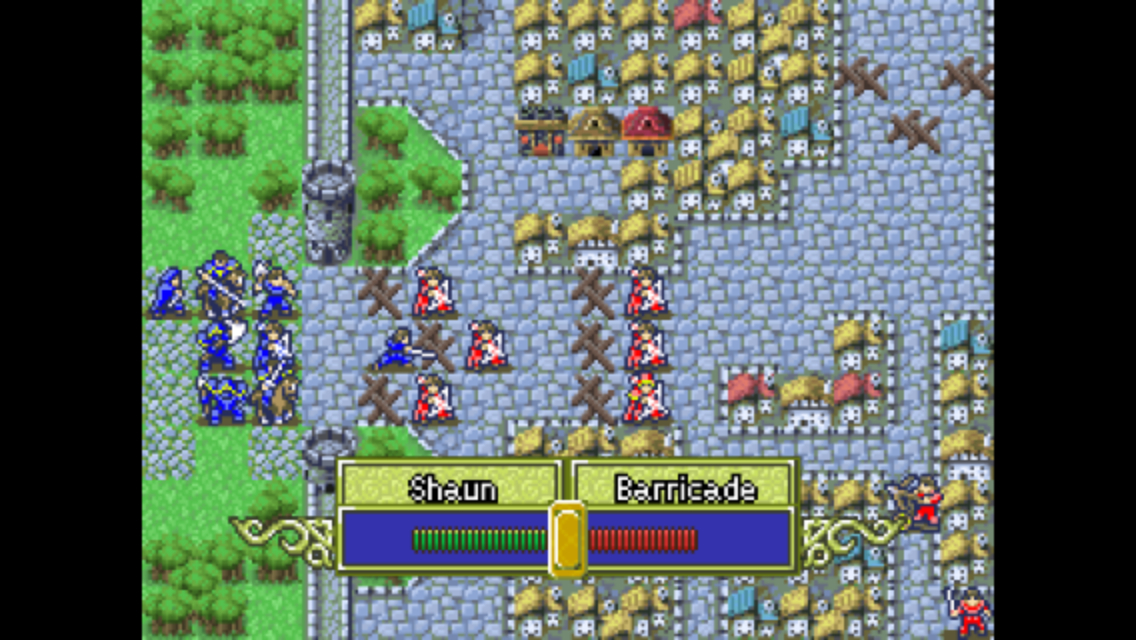 My job is pretty easy in reviewing Partia 2. Did you like Partia? If so, hop on board. You’ve got 22 more missions and some story resolution, and it’s a marginally better game if only in subtle ways. Did you find Partia lacking? Then you’re going to want to skip this one, because everything Partia did badly is still an issue here. If you haven’t played Partia and are curious about this game, then go pick up the first one for a lower price, as it’s not substantially different and will give you a perfectly good taste of what to expect from its sequel. Like my carefully drawn Spider-Man pictures, if you squint from a distance, this looks well enough like its source that it might pass if you’re not picky. It’s certainly an enthusiastic bit of flattery. That said, you may have noticed I am, in fact, not working as a comic book artist today, so maybe another person whose words are more famous than their name was right when they said that flattery will get you nowhere.