I don’t get that many chances to express my affection for pinball around here, mostly because the two main pinball developers tend to publish their new work as IAPs rather than stand-alone apps, and we don’t typically review that kind of thing around here. Let it be known, however, that I love pinball to its core. I love it like Joanie loves Chachi. I used to have an off-brand pinball machine in my basement back home in Canada, and whenever I went to arcades as a kid, I was instantly drawn to the noisy clicks, bells, and synthesized music emitting from whichever licensed machine they had that month. Although it took me a while, I’ve also developed a taste for video pinball, though like most fans, that’s out of compromise more than anything else, since finding an actual pinball machine in this day and age is hard enough in the USA, let alone Japan. It goes without saying that I am both a big fan of Pinball Arcade ($0.99) developer Farsight Studios, and a harsh critic. I regret that today, I am going to be more the latter.

Farsight is doing extremely important work with Pinball Arcade, in my opinion. Our hobby, like many in their early years, has a bit of a historical preservation issue, and whenever there are things like licenses involved, it gets that much trickier. Add in the fact that pinball tables have a major mechanical component to them, and you have a recipe for some of the most important groundwork for gaming as we know it being lost to the winds. Farsight’s dedication and passion to pursuing licenses and recreating machines as precisely as you could ever expect from a video representation is incredibly commendable, even if there are plenty of mishaps on the way. Given that burning love of pinball, it was only a matter of time before they tried their hand at creating an original table, a feat with challenges far different from recreating an existing one. I am not surprised they finally took a shot at it, but I am surprised by the subject of their first original table, Ghostbusters Pinball (Free). 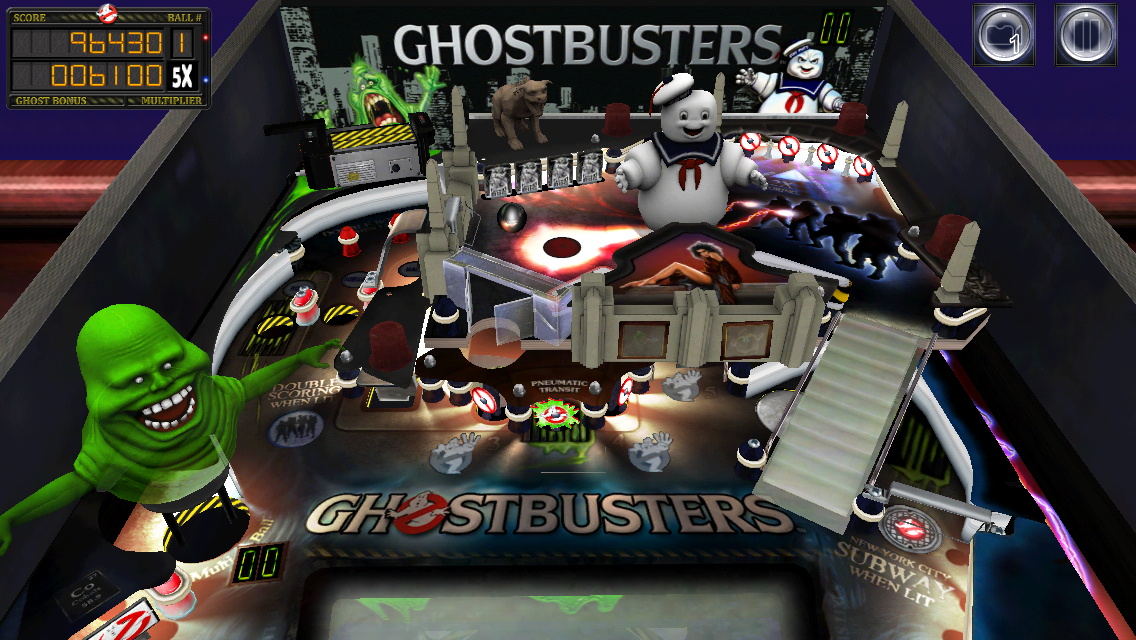 I’m not going to spend much time talking about the film. If you somehow haven’t seen it, you should. Even divorced from nostalgia, it’s an excellent, strange comedy. It’s also celebrating its 30th birthday this year, which is why we’ve seen so many Ghostbusters-themed products popping up. Even with that, I’m surprised that Farsight was able to secure such a thorough license without their usual Kickstarter campaign. When I heard they were doing Ghostbusters, I expected they had gotten the basic license, probably the popular theme song, but I never in a million years expected them to get voice and likeness rights to all of the actors, especially Bill Murray, who seems to ride a personal roller coaster with how he feels about involving himself with the franchise. Well, I guess he’s up right now, because all of the actors are right there on the board, and Murray’s voice, along with the other main cast members, can be heard in clips from the movie that play as you hit certain targets.

So, I’ve called this an original table so far, but the truth is that it’s actually only sort of original. Something was scratching my brain as I started playing Ghostbusters Pinball. The game reminded me an awful lot of a Gottlieb table, and that’s not necessarily the design I would expect out of Farsight on their first go-around at a new machine. I did a quick bit of comparison and found that this table is more or less a reskinned version of 1982’s Haunted House from Gottlieb, with a few added twists. I mean, it’s a fine table and the theme isn’t that far off from Ghostbusters, but it feels a bit odd, especially since we already have Haunted House available in Pinball Arcade. At any rate, it’s a good table design, and they’ve done due diligence in making it feel like a proper Ghostbusters game, with the iconic Slimer and Staypuft Marshmallow Man occupying their own corners of the board. This was, I think, the first table that had three different levels in the playfield that the ball could enter, and the rule changes made to it for this reskin/sequel let you unleash a multi-level multi-ball, which is a lot of fun. There are a few of the requisite bugs that come with Farsight’s work, most carried over from Haunted House in Pinball Arcade, but nothing too serious. It’s a enjoyable, challenging table with a lot of little quirks to learn. 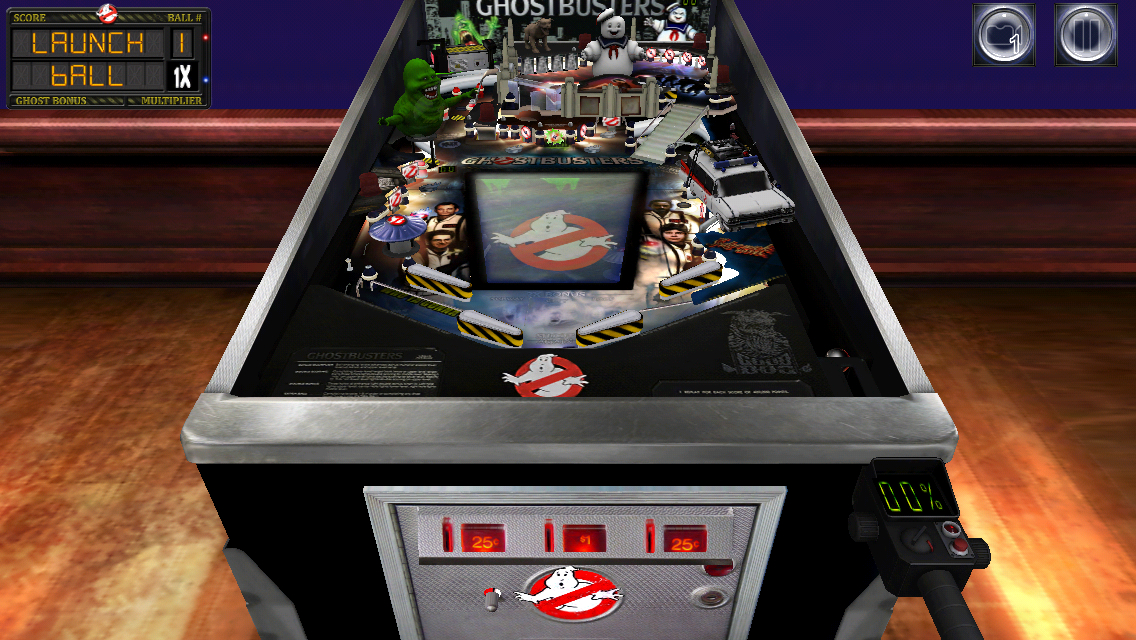 That brings us to the big problem with Ghostbusters Pinball. I can understand why it’s not part of The Pinball Arcade, since that is really about preserving real tables. What I can’t understand is the monetization model of this game. It’s free to download, and when you load up the game for the first time, you get ten tokens. Playing the game takes one token, and they recover at a rate of one every six hours. If you have Pinball Arcade installed on your device, they recover at twice the speed, but that’s still an incredibly slow trickle for a genre of game that requires repeated plays to master. There’s no apparent maximum number of tokens, so that’s something at least. The game offers two kinds of IAP, with a $0.99 pack of ten tokens or a $1.99 24-hour day pass that lets you play as much as you want for one day. Now, I know in 1984 that would be a killer rate to pay to play pinball, but it’s not 1984 anymore. Even compared to the sometimes-crazy monetization shenanigans we see on the App Store, a six-hour timer on a single point of what is effectively a stamina meter is unbelievable.

It’s even crazier when you realize you can go buy the table this one homages in a pack with another table for $4.99 in the Pinball Arcade app, making the price of playing a near-identical table without the license forever only a half-dollar more than a single day of play on this one. I know bills have to be paid, but it just seems a bit bold to me. It’s too bad, because I think this table is a wonderful tribute to Ghostbusters, and it’s a lot of fun to play. Being Farsight’s first somewhat original effort, it should be a grand celebration of the next step on their pinball-loving journey. Instead, it leaves me with a bit of a sour taste in my mouth. Particularly given its status as a variant on an existing table, I want to really sit down and learn all of its nuances through repeated plays, which is one of the main benefits to video pinball. Instead, I’m left waiting hours or digging in my pockets for change, like I’m ten years old at the laundromat again. 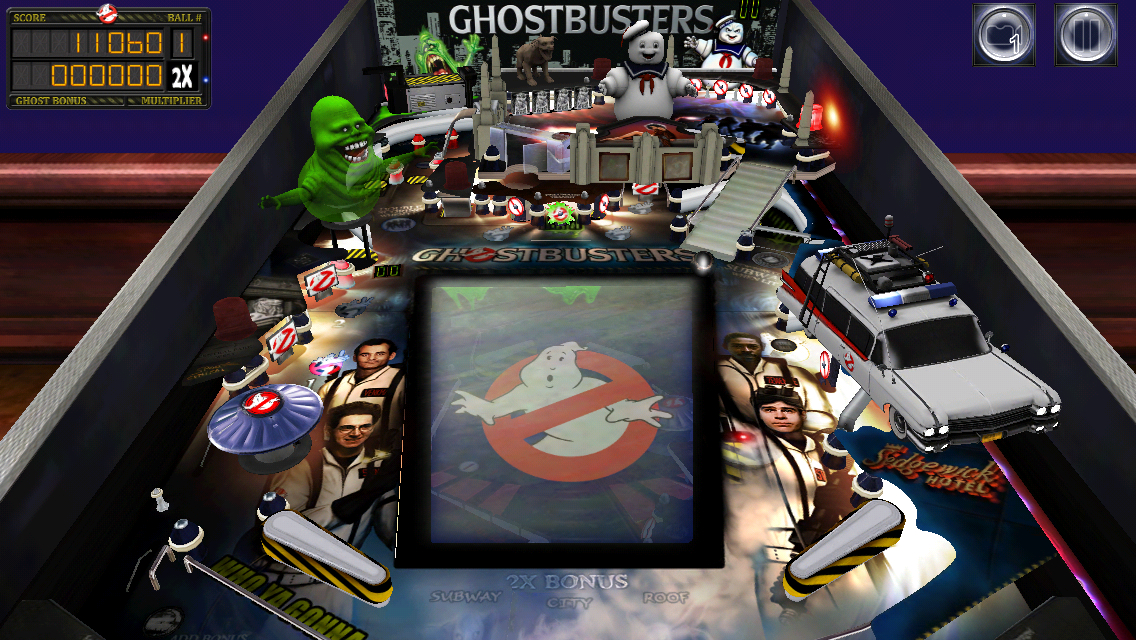 This is a pretty good pinball table and a nice bit of fanservice for the Ghostbusters crowd, delivered in possibly the worst, ill-fitting pay model they could have chosen. I sincerely hope this is a one-off and not a sign of Farsight’s future way of doing business, because while I love many things from the 80s, like pinball and Dan Akroyd’s acting career, one of the things I’m okay leaving behind is going broke trying to master a pinball table. If you dig the Ghostbusters, by all means, give this a download. It doesn’t cost you anything to try it out and play it here and there. If you’re just a pinball fan, go ahead and load up Haunted House again. There’s not enough new here to make it worth dealing with the hassle of the token system and its absurd wait times.