868-HACK ($4.99) creator Michael Brough is doing for the arena survival genre with Helix ($2.99) what he did for the roguelike with 868-HACK: take an existing genre and own it with his own style. This is an arcade game that’s got great art, great controls, intriguing gameplay, and even a few secrets to try and dig up, that make this worth checking out if you love arcade games.

The way to take out enemies is to encircle them – as you move around, it makes a circle around them fill up. The closer you are to an enemy, the less you have to move to fill up that circle. Once it’s filled, the enemy is killed and you get a point. Some enemies require spinning in one direction, or multiple circles. It’s a system that’s simple enough to play with, and does a great job at providing a lot of variety from its one core concept. And it also means that there’s a lot of on-the-fly strategizing involved: because the enemies often move in different and chaotic ways, with new ones coming in from the edges of the screen, where you move, and the direction you go in matters a lot. 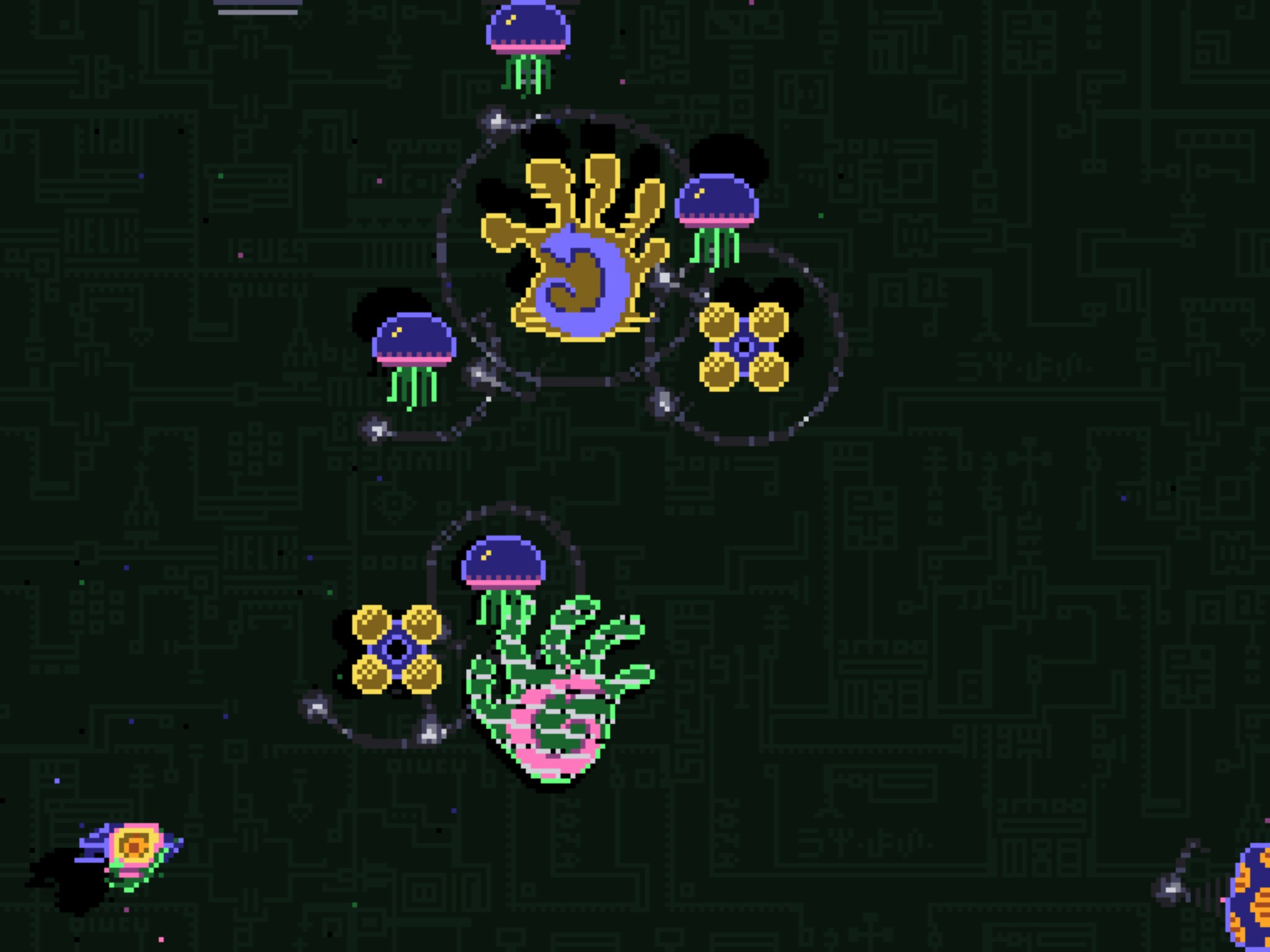 The three modes do share the same core concept of encircling enemies, but they serve as different difficulties, mixing up the types of enemies that come in. Terror mode has faster and more numerous enemies, while Vortex mode, which can be unlocked in the options if you’re so inclined, is the most difficult, but features large numbers of the one-directional enemies. But where many games’ easier modes suffer from difficulty in making them entertaining when later modes are unlocked (the original Tilt to Live ($2.99) suffered from this with its original and Code Red modes), each mode just winds up being a nice change of pace from the others. And playing well turns up secrets and other things that just take time and mastery of the game to help figure out – and I’m sure there’s things I have yet to find.

The game’s controls, at least on the iPad Mini 2, use an offset system with some velocity to the movement, and it feels great. Doing touch-friendly controls is often a challenge, but I never felt like it was the game’s fault for me dying, it was always mine. A game nailing that sort of feel with its controls is a challenge, touchscreen or no. Brough says that the game might be a bit easier on iPad because of the greater screen area, but the enemies are a bit slower on iPhone. 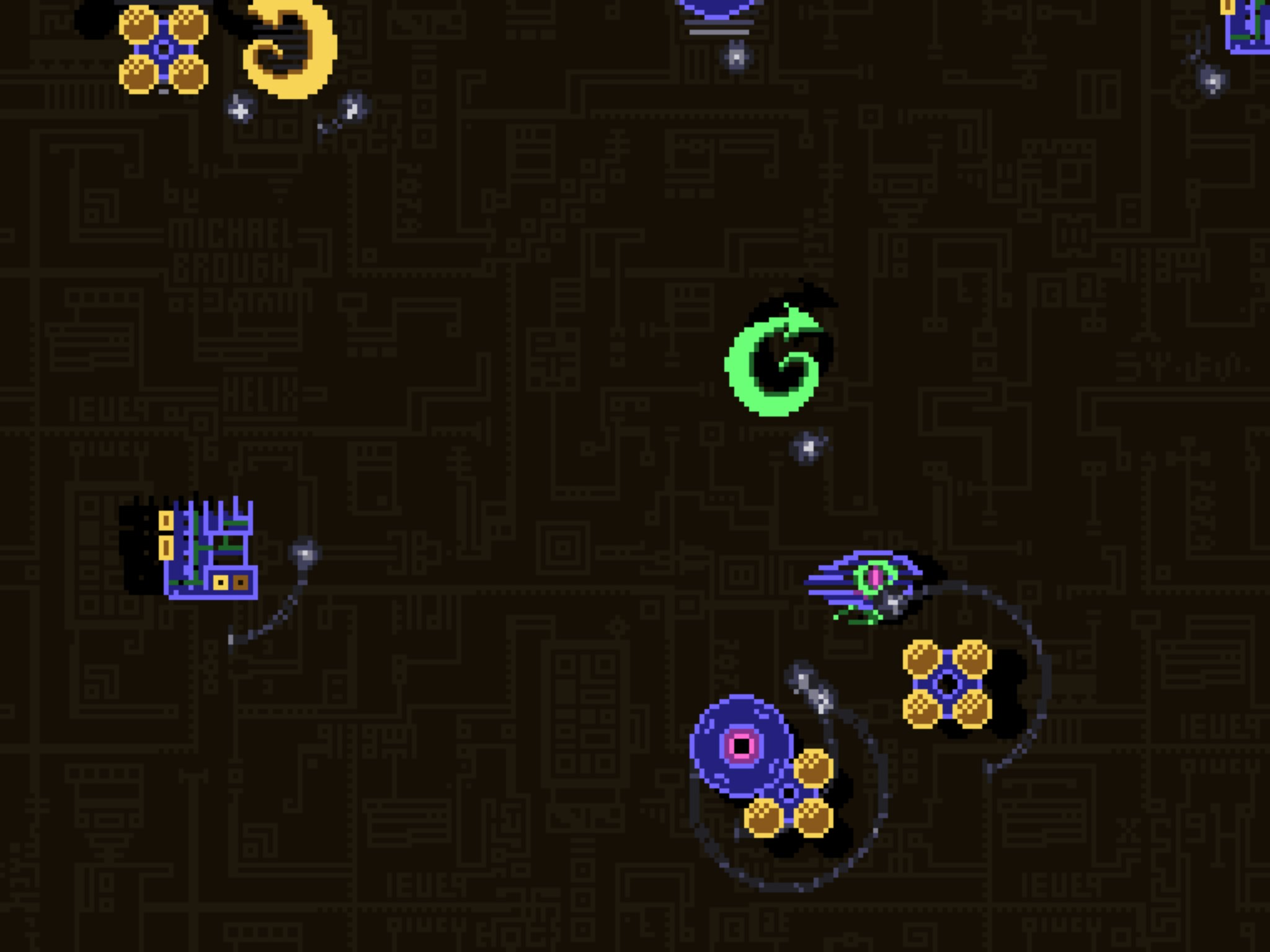 The visuals are definitely in the vein of Brough’s other games, using a unique style of pixel art that gives off an appearance of glitchiness, with few straight lines. It’s the perfect game for Halloween with all the creepy crawlies.

The soundtrack, by Andrew Toups of Ziggurat ($0.99) fame is fantastic too. The drums that kick off the music for Terror mode are killer. But the soundtrack and the visuals just do so much to create a fantastic atmosphere for the game.

Really, Michael Brough knows how to make these really cool games, ones that take existing concepts and just explore them in his own way. There’s a certain tactical element to playing Helix that other games just lack. And Brough just has the unique touch that he applies to the games he makes. If you love 868-HACK or want a high score game with a unique touch, check out Helix.