Clutch Play is headed back to mobile with their sophomore title, Skullduggery ($2.99). No bones about it, this game is a head turner. You can find platformers of all shapes and sizes on iOS but this one is the head of its class. Just looking at the graphics(and my amazingly funny jokes), you can probably already guess there are plenty of head and brain puns to be found in this app. What you find underneath, however, is a really great game.

In Skullduggery, your objective is to collect taxes as a disembodied skull that can project itself at will who is trying to complete a series of levels and bosses. You do this by using the parietal bone (back plate bone of the skull) to pull back what looks like about half of the brain and letting go, snapping the entire thing forward like a rubber band. Now I am pretty sure that normal brains aren’t that stretchy or resilient, but I haven’t tested it myself so I can’t really lodge an official complaint. Its a unique take on classic platforming that has a very cool Angry Birds (Free) style slingshot mechanic. Each time you draw back the bit of skull to launch yourself forward, you go into a slowed down bullet time that gives you extra time to make precise shots. As you fling your way through the levels, you will be given objectives that, if attained, will grant you stamps that unlock cosmetic upgrades. There are also secret areas that have small visual tells and contain treasure chests and artifacts that count towards the completion percentage that the game keeps track of. 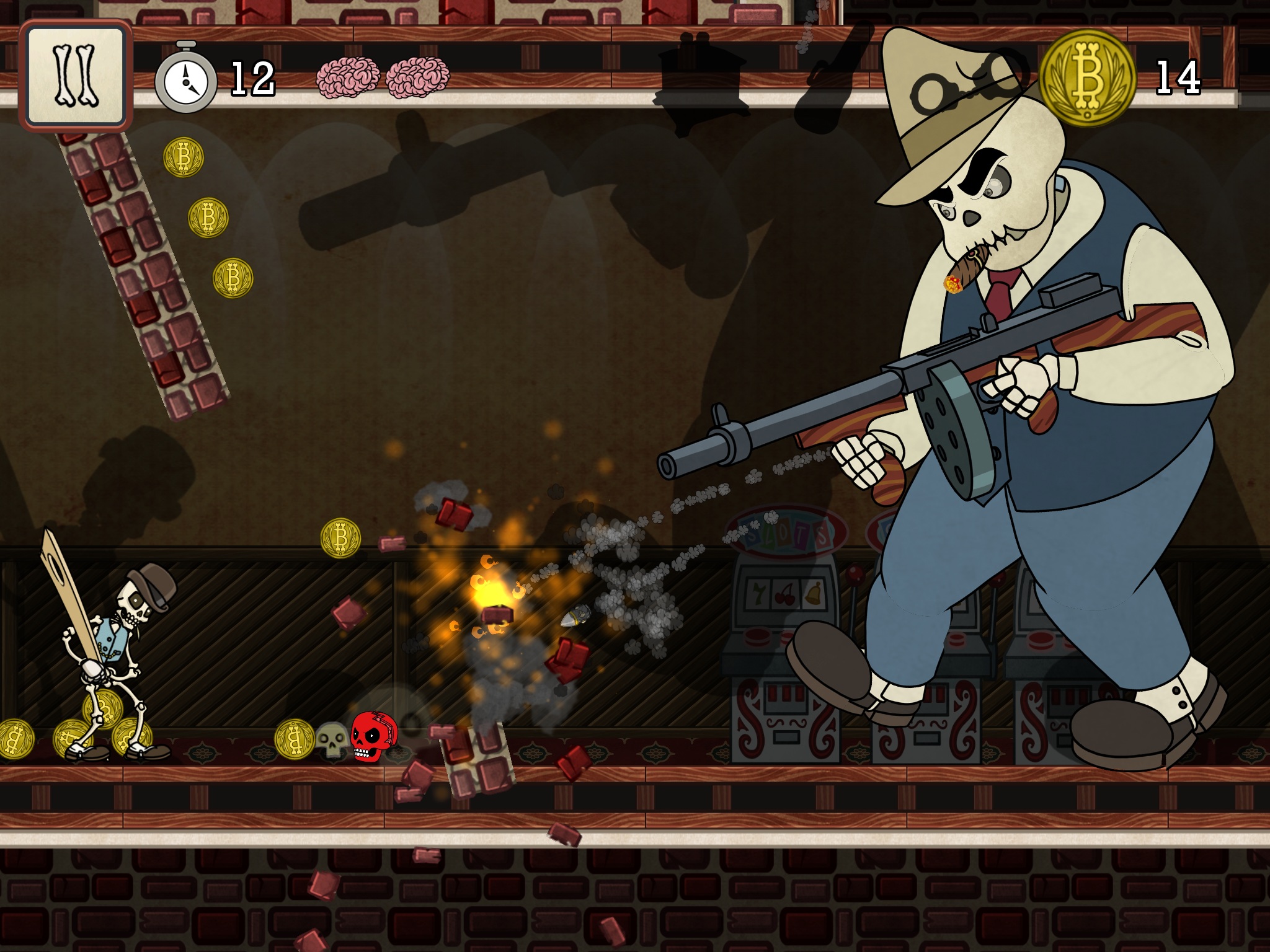 The screen real estate of the skull is pretty small. It doesn’t really take up that much space. What is interesting about this is that it has allowed Clutch Play the ability to squeeze more paths onto the screen than your typical platformer. While it can start to feel claustrophobic, I think it was an interesting by-product of having a diminutive protagonist. Some of the designers stopped by our forum thread to dish up some dev stories including the genesis of our skull hero. The skull was apparently a full skeleton but got reduced down to just what he is now based on a morbid joke. I have to say its a pretty funny joke and has resulted in a very cool format for level design. This format was used pretty well to make some very complicated twists and turns which would probably be way too difficult if not for the bullet time slow-mo.

Unfortunately level design itself is probably my biggest beef with Skullduggery. What could have been a crazy mix of pinball and platform just fell a little short. Repetitive levels, set pieces and structures left me wondering multiple times why I was facing down similar challenges. The nice thing is that these similar set ups still offer a solid amount of challenge even if you see them 5 or 6 or more times throughout the course of the game. Some of these border on tropes because of how often they show up. The wall of death that slides from one side of the screen to the other that forces you to quickly navigate narrow passageways is probably the worst offender. Even the boss fights in Skullduggery are glorified death walls. It should speak volumes that despite this annoyance, the game is really good. 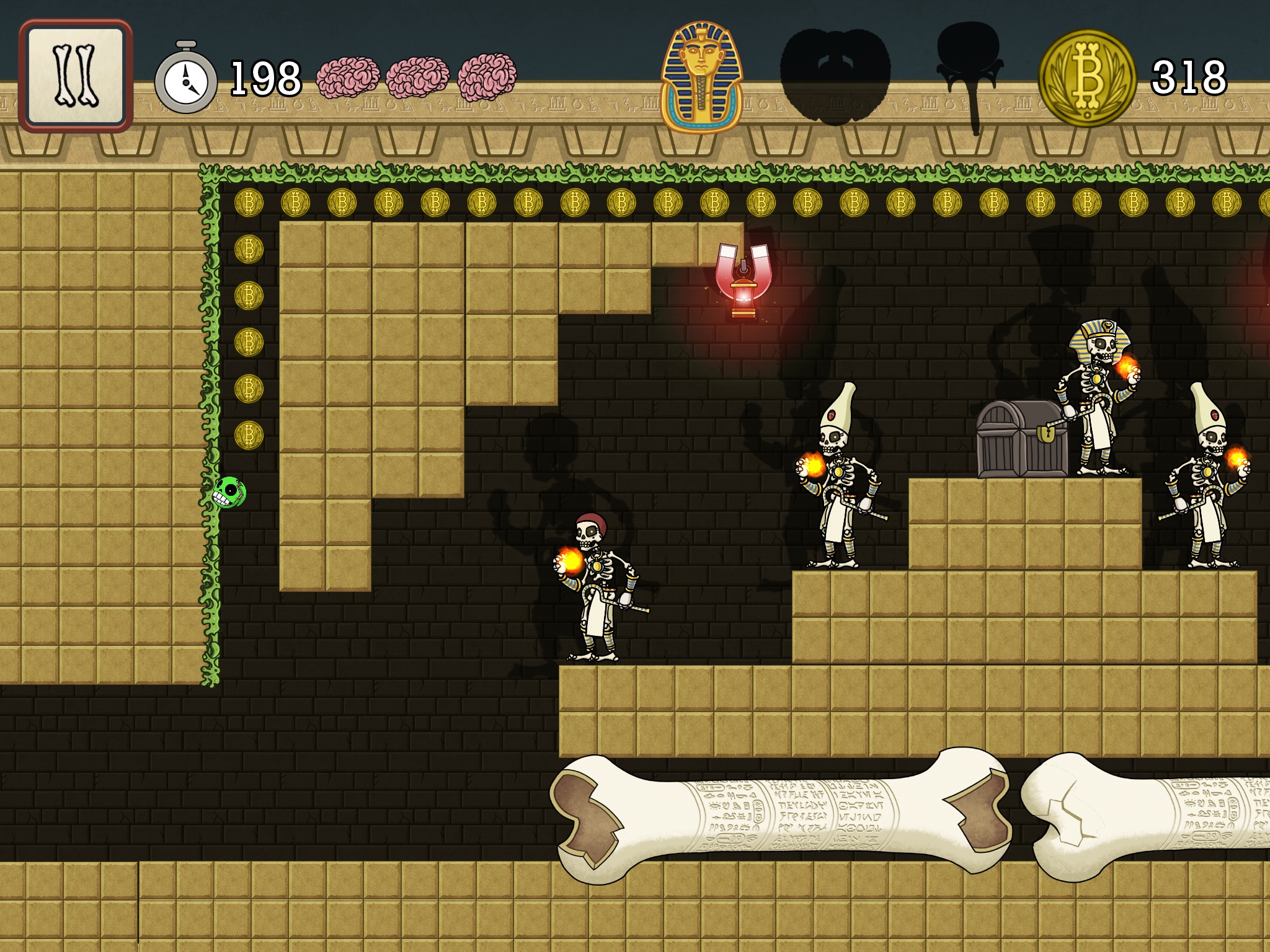 The controls of the game are pretty much spot on. I never had any moment in time playing through the game on my iPad that it felt glitchy, buggy, or even slow. The physics of the game are solid and really the high point of the game for me is how you can end up making precision shots in bullet time and end up comboing multiple objectives in short order. Bouncing off 2-3 skeleton enemies then into a fire, through some boxes all to avoid the ubiquitous death wall while grabbing a treasure chest feels pretty great.

Another thing that gets asked in our forums pretty regularly is ‘how tough is the game?’ I found it to be pretty fair but challenging. I would offer a tip to anyone already playing that bullet time is not restrictive in any sense. You can go through an entire level in bullet time if you really wanted to. The easiest way to complete a level is to take it slow and make each shot precise and followed up immediately by aiming the next one in slow motion. You may end up having to redo a level a time or two still, but I found it was much easier once I adopted this technique for the toughest bits.

As a platformer, the game really shines but there is another facet to this gem. In head to head mode, you get to frantically race a friend to see who can gather the most loot and finish first. Camera angles do get a little tricky in this local only multiplayer mode, but that doesn’t really diminish the fast paced fun this extra feature provides.

At $4.99, I’m not sure the price point will attract too many compulsive buys. The good news is that the game is well worth the money especially seeing as how new content is in the pipeline. For the great physics tech and solid roster of features I have to say hats off to Skullduggery.