Stoic’s June announcement is finally upon us. Banner Saga($9.99) is now available on and designed for iPhone and iPad. This is one of those games that might just change preconceived notions about what mobile gaming is and isn’t. The scope of this project should not be underestimated. Very rarely do we find an adventure with this much substance and depth even on one of those ‘real’ gaming platforms, but here we are. Unrestricted by cables or keyboards, Nothing is lost in translation from award winning PC title to this amazing iOS gem.

It’s not easy to lay out an epic tale of sorrow and loss without feeling slow or plodding, but Banner Saga does it. Even after multiple play throughs, you will still find yourself facing new challenges that make you second guess each decision. Each step along the path feels like you could be on the brink of tragedy. The pragmatic and somber mood of the game hangs heavy like a sodden wet canvas threatening to snuff out any hope you might have of overcoming the odds. Composer Austin Wintory’s soundtrack and the stark Norse inspired backdrop are key in generating and perpetuating this mood. 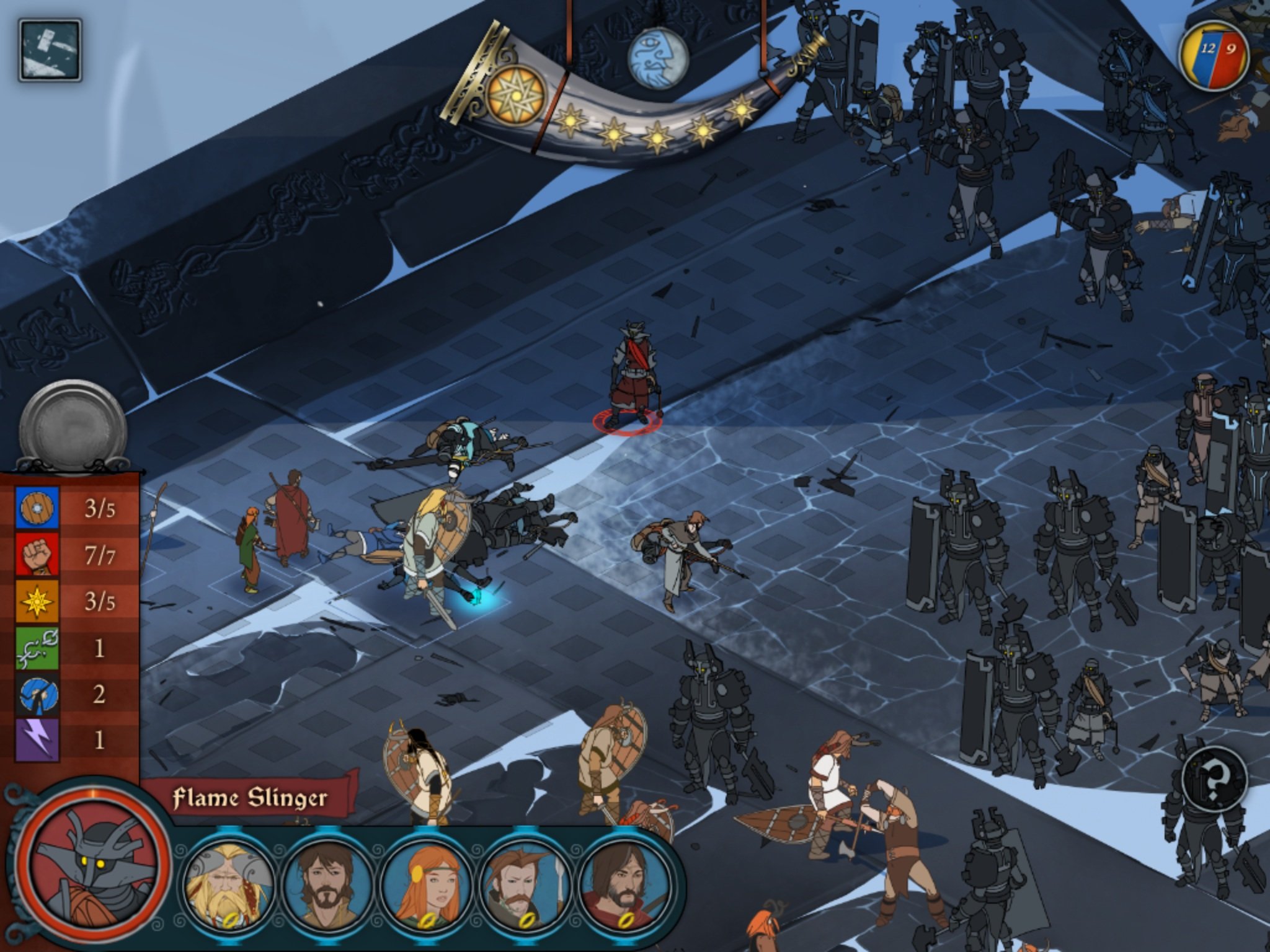 The story sweeps you into the world following two simultaneous plot lines. This is not a new plot device, but still remains to be a solid story telling staple used by the greats like Dickens and the kind of greats like George RR Martin. Your role in determining story development hinges on conversations you hold with party members and various individuals you come across in your adventures. You are also forced to react to emergencies and formulate ad hoc combat strategies. The difficulty of choosing the correct chat option sometimes borders on the impossible, but other times is pretty simple to figure out. I’m not convinced that it is the perfect system, but the variety functions much better than the typical black and white choices most ‘story driven’ games wholly consist of. Some of the most harrowing decisions occur when a party member is directly threatened and you might end up losing them from your party. More often than not you can save them, but usually you end up sacrificing something else in order to do so.

The last platform you would expect a game like this to do well on would be mobile, but this game has mobile at the core of it’s design. Menus, buttons, and the entire interface function fantastically. I even saw some comments in our forum thread that not much has changed from the PC version, which I would consider a huge compliment towards a universally solid interface design. The game is beautiful and the cold barren world is somehow still dynamic and full of life. Banner Saga begs to be played on mobile, but not because you would want to play it in short spurts while on your commute. No, I imagine the ideal place to play Banner Saga is curled up in bed with some hot chocolate. I found myself abandoning chairs in favor of couches or beds as I played more and more. It might just be me, but much like a Lord of the Rings movie viewing, the best place to experience Banner Saga is one you wont mind spending a few hours at a time and reclined as much as possible. I found that the game even uses less battery power than I am used to and was able to play for pretty long stretches at a time. Everything about the game seems like an invitation to pull away from distractions and let your teeth sink in away from anyone and anything else. 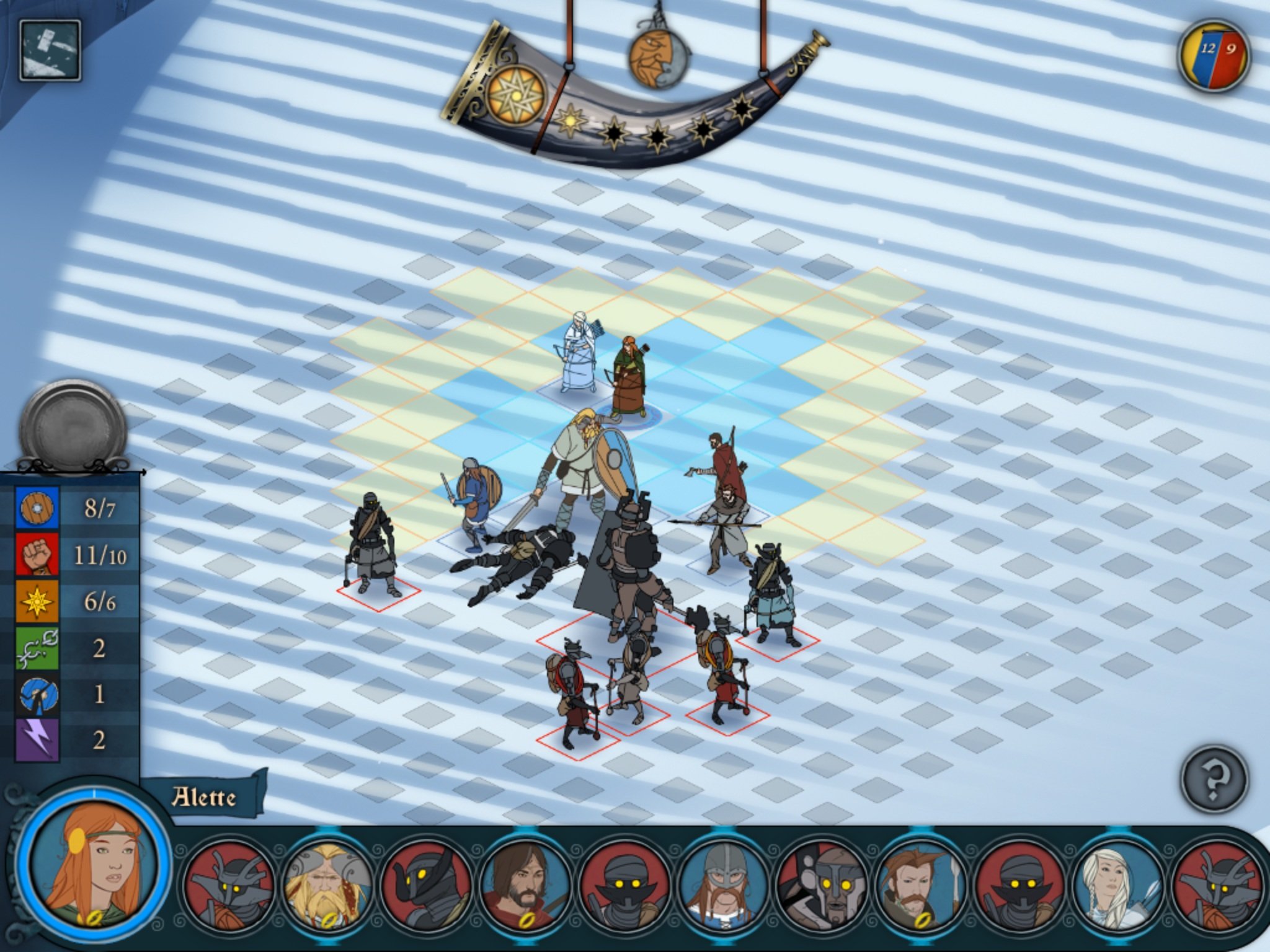 What surprises me the most is just how involved I feel in the game. I’m not too proud to admit that I was a bit wrapped up in the story line. I may or may not have even had a few viking inspired dreams over the last few days. Having only played The Banner Saga: Factions on pc, I was able to start with a relatively clean slate when I fired it up on my iPad. Maybe the storyline won’t do anything for you, but I found the game capable of delivering a compelling narrative that doesn’t allow much to get in the way of telling a story. You might notice that I keep coming back to the story. Without it, Banner Saga would be a prettied up side note and not a blockbuster AAA title. I enjoy the tactical gameplay but it’s just unique enough to avoid being called derivative. I don’t think Stoic tried to reinvent the wheel with the finished product’s gameplay. A good way to describe why this doesn’t matter much to me is to compare it to Star Wars. A New Hope and Return of the Jedi didn’t have the super flashy extended light saber fight scenes that Episodes 1-3 had, but EP 1-3 had very little story build up and I was more interested in the drama that existed in the original fight scenes and they had much more dramatic tension. In general you won’t see stuff that rivals the complexity or magnitude of Final Fantasy Tactics($13.99) or Disgaea or XCOM($9.99) in the gameplay, but if you are tuned into the story, combat will carry more than sufficient drama.

The unique gameplay bits, while pretty minor, are still fun and promote strategic planning. Each hero and enemy in a battle has armor and hp pools that can be directly attacked. Armor reduces damage taken and HP increases damage dealt. Dealing HP damage is usually preferable unless armor is high enough to reduce damage down to a nominal amount. Each hero and enemy has a special skill that requires energy expenditure. Energy can also be spent on increasing damage or move distance. The combat system boils down to a basic resource and risk management exercise. Like I mentioned before, I enjoy the combat but its because of the drama. The combat system itself is a little watered down compared to other tactical turn based systems but shines out as being capable of doing it’s job without distracting from the storyline. I’m not the guy that gets hyped up for story based games. I am actually the antithesis to that guy. This is that game that will change your mind on story driven games. As soon as you get caught up in the story, Banner Saga will give you a ride well worth the price of admission.