A few months back, developer Rusty Moyher released Astro Duel ($4.99), a competitive top-down space shooter for the iPad. Though you could play against AI bots, Astro Duel’s real attraction was local multiplayer. Two players could play on the same device, and more than two could join in using a variety of options: an extra device running the Joypad app, an MFi controller, an iCade device and even the GameDock controller. The bottom line with Astro Duel was, once you got a mix of friends and controller devices together, the game was an absolute riot in multiplayer competition.

One caveat though was that Astro Duel is iPad-only, meaning iPhone owners couldn’t partake in the multiplayer fun. It made sense at least–trying to cram multiple people around an iPhone, despite the fact that I’ve seen it done successfully in certain games before, just wouldn’t have worked well for Astro Duel. That baby was just destined to be an iPad game only. However, Moyher was adamant about getting a similar experience onto smaller iOS devices. His solution? Massively rework the game to the point that it’s now a completely new and separate game called Astro Party. 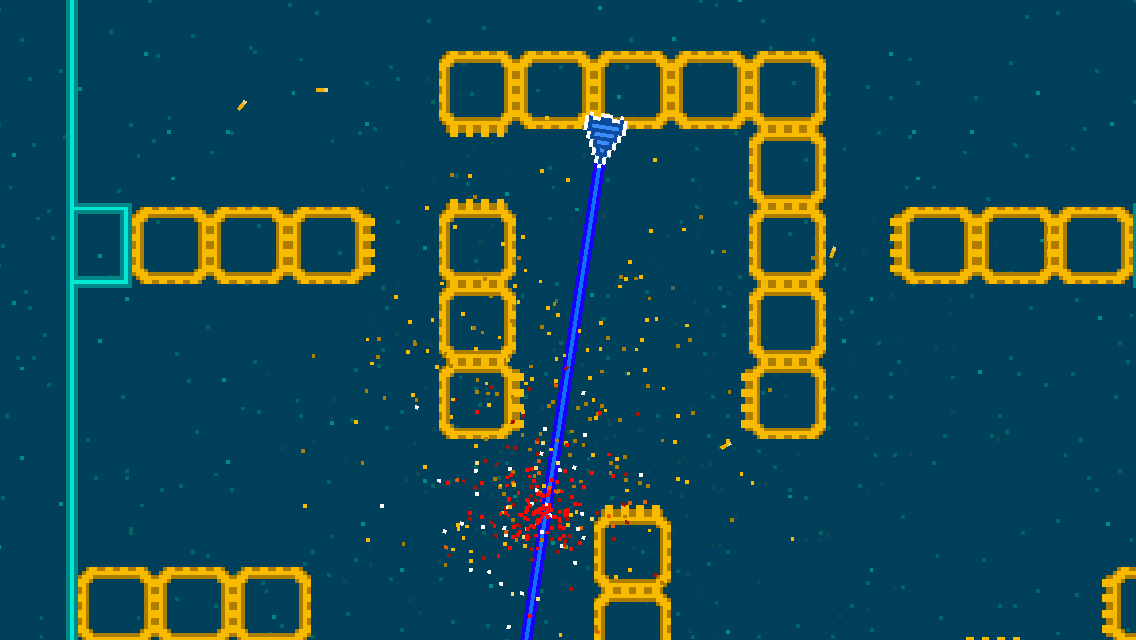 What’s different in Astro Party? The control inputs for one. In Astro Duel you had five main inputs: left/right rotation, thrust, main cannon firing, and a button for special weapons. In Astro Party there’s just two: one for rotating your ship clockwise and one for firing. Your ship thrusts forward automatically, and special weapons are fired using the single firing button once they are acquired. Astro Party is definitely stripped down from Astro Duel, but there’s actually a lot of interesting strategy to using just the two buttons and only being able to rotate one direction. For Astro Duel fans it should offers something fresh, and is meant as a complementary experience to that game and not a replacement for it.

Another cool addition in Astro Party is a completely new mode called Pilot Execution. This mode is awesome. Here, after you’ve destroyed an opponent’s ship and their pilot gets ejected into the playfield, you then actually have to go after the pilot itself. Only killing the actual pilot will count towards a win, and if you take too long killing the pilot, they can actually respawn back in their spaceship and be back in action. Pilot Execution is a really nice twist on the typical Astro Duel formula.

One bummer about Astro Party is that it’s strictly a same-device multiplayer game, which means there’s no support for external control devices of any kind nor is there any AI-controlled opponents. It’s just you and one other person playing on the same iPhone device, or you and up to three others playing on the same iPad device. Though, I wouldn’t say Astro Party is totally devoid of single-player action, as I’ve been having a good time trying to play against myself on my iPhone, which is surprisingly harder and more fun than you might imagine.

Here you can see Astro Party in action using the most amazing medium known to mankind: the animated .gif:

Astro Duel just plain wasn’t going to work on a screen smaller than the iPad, but with Astro Party it’s nice that at least a taste of the action found in the full game could be brought to the smaller iPhone devices. It’s a great game to bust out when you’re bored with another person around, and the frantic multiplayer fun of Astro Duel on the iPad translates pretty well as a smaller, more streamlined experience. And hey, it’ll be free, so why not give it a try? Astro Party will be ad-supported, but if you own Astro Duel on the iPad, ads will be disabled. Look for Astro Party to hit the App Store next week on October 2nd.