One of the cool things about video games is how they let you do things that you might not be very good at in real life. For example, in the real world, I am about as stealthy as a cow on ice skates, but in video games, I can be a master big boss ninja. Stealth games were around as early as 1981’s 005 from SEGA and enjoyed a few brief spikes of popularity around certain titles like Castle Wolfenstein on the Apple II and Konami’s Metal Gear on the MSX, but for the most part, it was a genre waiting for technology to catch up with its ambitions. Finally, in the late 1990s, the genre broke out in a big way on the backs of titles like Metal Gear Solid, Thief, and Tenchu, and would keep going strong with heavy hitter franchises like Splinter Cell and Assassin’s Creed. These big franchises are still going at it, though at times with a reduced emphasis on pure stealth, but the genre’s recently been seeing a lot more small-scale projects. I think Stealth ($1.99) represents one of the smallest yet, having been created by just one person.

In Stealth, you play as a female assassin sent into a prison on a rescue mission. You’re sent in with little more than your daggers and a bow with a handful of arrows, but over the course of the game, you’ll find new items to add your arsenal. For the most part, however, you have to do just what the title of the game indicates: Sneak up on enemies and take them out without setting off any alarms, traps, or ambushes. Visually, the game has a lot in common with Tenchu, but in terms of gameplay, it’s a bit closer to the older Metal Gear games. The trademark grappling hooks and rooftop traversal of Tenchu are nowhere to be found here, so most of your cover is going to be of the wall or box variety. Room by room, the game follows the same satisfying flow of any good stealth game. You have to be patient, learn the enemy patrol routes, find a window of opportunity, and take advantage of it without slamming it on your fingers. 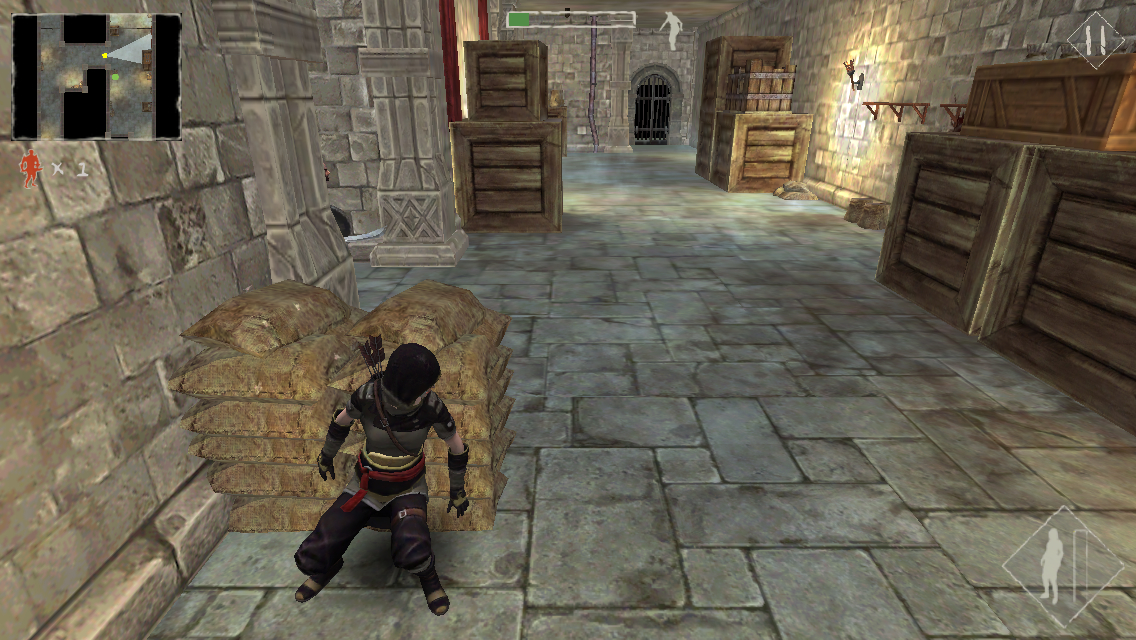 The two big things stealth games were waiting for in terms of technology were advances in artificial intelligence and 3D worlds. The former was important not so much for when the enemies can’t see you, but what they do when you are spotted. Making enemies smart enough to make a good pursuit of the player while still providing them a chance to make a thrilling escape isn’t as easy as it looks, I’m sure. Stealth interestingly sidesteps this problem. If you’re spotted, you’re basically dead. The enemies will pursue you doggedly, and if they catch up to you, you don’t stand much of a chance against more than one or two foes before your life bar gives out. There is no escape in the proper sense, so you have to make sure you don’t get caught in the first place. The consequences of death are small, at least. You’ll just be sent back to the start of the room with all the guards back in place.

Stealth does a better job in taking advantage of its 3D world. Sure, you can’t go flying around on rooftops and so on, but you can go into first person view, and peek around corners when you’re pressed against cover, Metal Gear Solid-style. This is actually a great way to see enemies who aren’t showing up on your radar or in the overhead view yet. The map designs lean heavily on long hallways and corners, so all you have to do is push yourself up against a bit of cover and have a look all the way down to see what’s coming. Things can still surprise you from around corners, but you have to take your advantages where you can get them. You will eventually find an item that adds a bit of a vertical element to things, but it comes in pretty late in the adventure. 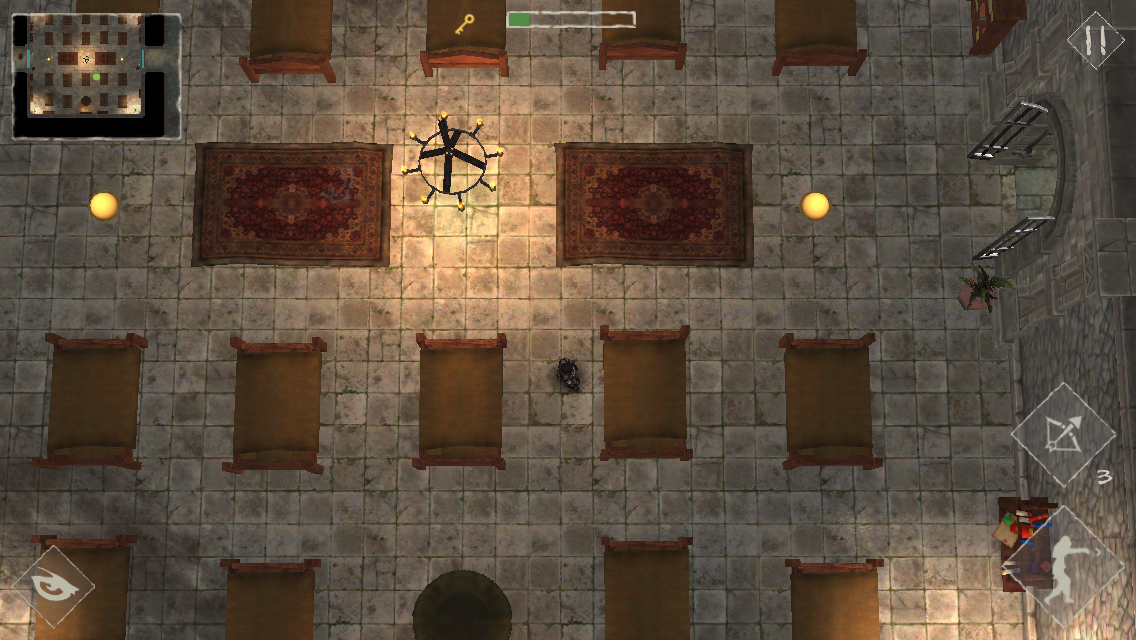 The range of actions you have at your disposal is relatively limited. You can of course move around via a floating stick, and you have virtual buttons for your tools along with an all-purpose action button. The stick’s a little weird sometimes, but moving your character around in the overhead view does feel pretty similar to Solid Snake, and using a context-sensitive button is a smart way to cut down on screen clutter. The biggest problem I had with the controls was in toggling walking and running. You have to double tap on the screen to switch modes, but you have to be at a standstill. It’s just awkward enough that it’s hard to use in a pinch until you spend some time getting used to it. I also really would have liked to have had the ability to shoot in first person view. The way it is now, you just kind of have to fire whichever weapon you want to use and hope it’s smart enough to home in on the desired target. Switches can confuse the auto-aim and cause you to waste precious ammo.

You have a mini-map in the upper corner of the screen that shows you nearby guards and their line of sight cones, once again in the manner of Metal Gear. The game also helpfully offers up how many guards there are in each room. The map doesn’t show a very wide area, which is fine for the stealth portions of the game, but there are also some puzzles and backtracking elements where it might have been nice to have even a broad view of the rooms you’ve been to. It’s not that the game sends you all over the place Metroid-style, but you will be picking up keys pretty often and you might have to work your way back to whichever door it might be for. The puzzles are a pretty nice change of pace that keeps the game from being just four hours of stealth killing. They’re vaguely reminiscent of Zelda, with lots of switches and boxes to push around. It’s kind of a weird mix, but I liked it. 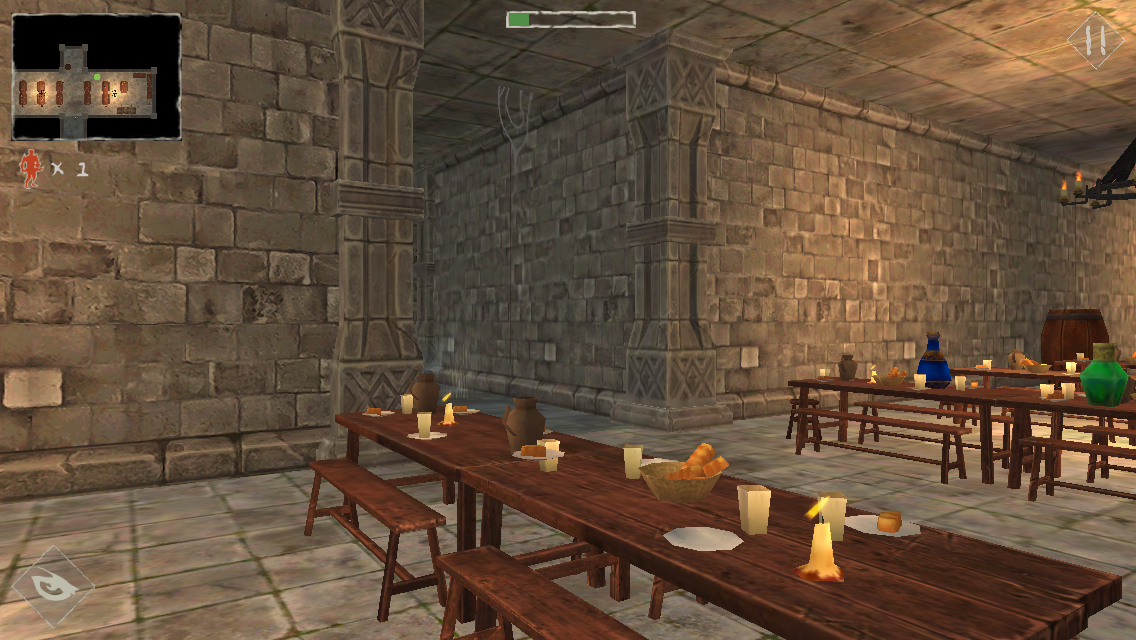 It’s important to keep in mind that this is a fairly ambitious game for a one-man team. When you’re sneaking around, hiding, cutting throats, and so on, the game is almost shockingly slick. If you deviate from the script, things can get a little bit messier. Going off the path can get you stuck on pieces of the environment, and if things come down to a melee fight, it’s a lot less stylish. Manipulating objects can be a bit fussy, since switches will often attract your character’s attention even if that wasn’t your intention. It all holds together for the most part, but it’s a sharp contrast to the part of the game that obviously got the lion’s share of the developer’s focus.

The production values are also surprisingly good, with nice, detailed graphics, and a decent audio presentation. The soundtrack is a bit limited, but what’s here is good, and the sound effects convey what they need to. The animations could use a bit more work, and I’d love to see some cosmetic variety in the kills the way Tenchu handled things. Game Center is here, but only in the form of a small list of achievements. One of those achievements gives you some incentive to look around, but the others will unlock through the course of playing the game. This game is completely free of IAPs, so you just pay your purchase price and you’re done. 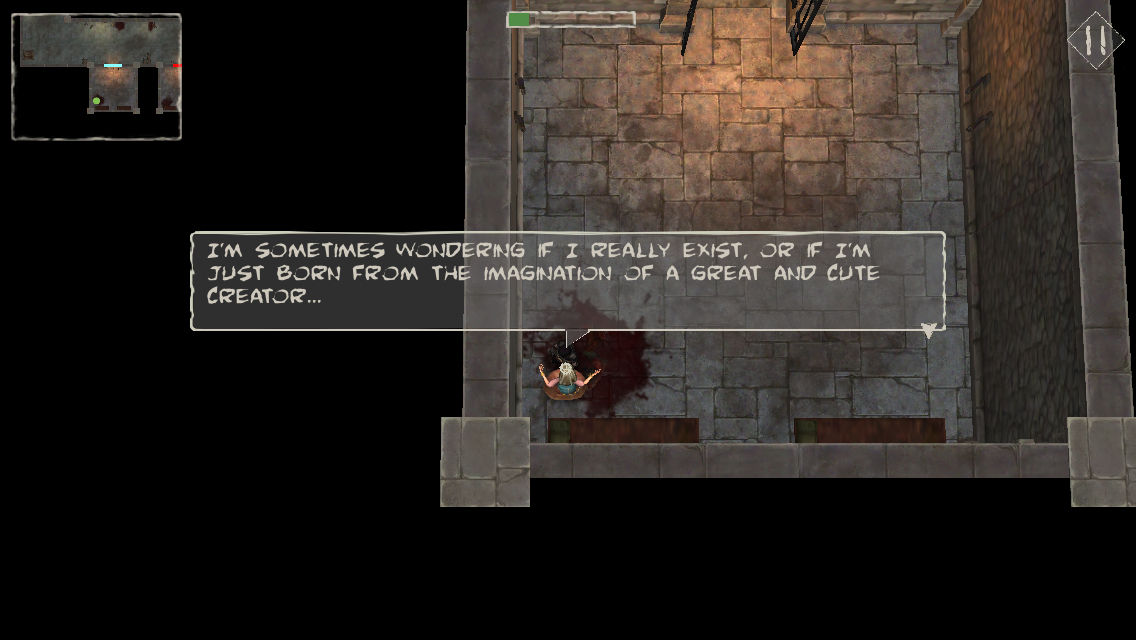 Although the running time is a bit short, I enjoyed the interesting combination of puzzles and stealth action found in Stealth. It’s a very rough game in a lot of ways, but the core elements that it’s built around work nicely. It’s not on the level of either game it draws inspiration from, but given the price tag and the size of the team, I think that’s more than fine. If you enjoy stealth games, you’ll likely have a few frustrating moments with Stealth, but on the whole, I’m pretty sure you’ll enjoy it. If you’re not familiar with the genre, the streamlined nature of the game makes it not a bad place at all to get your start.