Gameloft’s newest release, Spider-Man Unlimited (Free), makes me feel all complicated inside. Regular readers will know that I tend to prefer my running games to be simple and gimmick-free, and this game is anything but that. Of course, regular readers will also know that I can’t resist a game based on superhero comics. I expected that to be my struggle with the game, but in a surprise twist, it’s not. This is probably the most fun I’ve had with a gimmick-heavy runner this side of Iron Man 3 (Free). It has a ton of gameplay variety, a great goal-based structure to accompany its endless running mode, exceptional fan service, and a few ridiculously compelling tricks borrowed from Puzzle & Dragons (Free)-style games. As a huge Spider-Man fan, playing this game is an absolute joy. Unfortunately, leveling up an assortment of collectible characters isn’t the only way Spider-Man Unlimited borrowed from that popular genre, and therein lay the proverbial fly, or I suppose spider, in the soup.

Okay, so the story goes that dimensional wormholes have opened up above New York City, and tons of bad guys led by the Sinister Six of multiple realities are spilling out and wrecking things, looking for that ubiquitous Marvel MacGuffin, ISO-8. Nick Fury asks Spider-Man to help take care of the problem, because even Thor gets a day off sometimes, alright? Spidey’s feeling pretty overwhelmed by it all until Fury shows him their secret weapon. SHIELD’s built their own portal capable of pulling Spider-Men of various dimensions through, as long as you grease the wheels just right. It’s actually a pretty great premise, because it allows Gameloft to throw in a ton of character variations and costumes, which is basically what makes Spider-Man fans go weak in the knees. Or maybe just me. 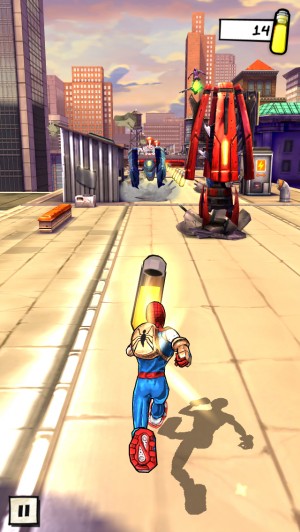 The story mode of the game offers a stage by stage approach, with each one tasking you with a certain objective. Once you’ve achieved that objective, which is usually to smash in the face of a villain, the stage ends, and you’re free to move on to the next level. The catch is that each stage requires you to have a Spidey of a certain level. Your Spider-Men level up individually, earning experience with each run. Leveling them up increases their multiplier and gives them access to more stages. Maxing out their levels allows you to promote them, increasing their level cap and sometimes unlocking new special abilities. You can also feed Spider-Men to other Spider-Men for some extra experience points, and if you have a double of the same Spidey, you can fuse him to get a discount on that whole promotion thing. Yes, the Puzzle & Dragons is strong with this one.

Like that game, you can pull Spider-Men using either the regular currency, vials, easily found during play, or the slightly more rare ISO-8 premium currency. Using vials will give you only a small chance of drawing a rare Spidey, while using ISO-8 guarantees one. Gameloft will be adding more Spider-Man variations to the game as they go, but even the starting lineup is awesome. Noir Spidey, Spider-Ben, both Scarlet Spiders, the Bombastic Bag-Man, and more await you. Oh, but if you want to have them all at the same time, there’s a little catch, which will be quite familiar to fans of Gameloft’s Iron Man 3. You see, you can only have so many Spider-Men at one time. If you want to expand that, you can, but it will cost you. Luckily, it’s just the regular currency in this game, but the price escalates quickly, and hanging onto extra cards that you may want to use for fusion later also occupies slots. Still, that’s not so bad. I also applaud Gameloft for being pretty generous with the premium currency. There are quite a few opportunities to earn it without having to pay.

On top of the story mode, the game also has an endless mode where you can grind experience points and vials until your skill or luck gives out, and an event mode where you can challenge your score against other players to win some cool prizes. You can even send your extra characters out on missions that will keep them occupied for a set amount of time in exchange for experience and vials. Plus, the story mode itself has a lot of optional missions, some of which will require you to use a particular variation of Spidey. There’s a lot to do here, more than in most runners, that’s for sure. The story mode itself will keep you busy for quite a while, even if a fair bit of that is grinding so that you can simply accept the next mission. 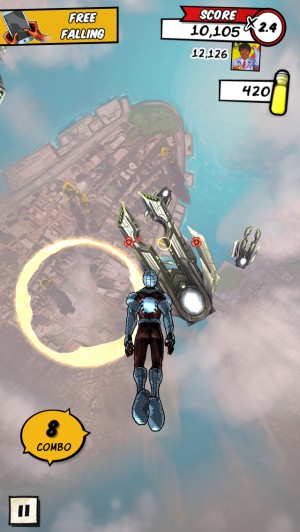 The gameplay itself is a real blast. Of course, you have your usual behind-the-back running sections, where you swipe to move from lane-to-lane, jump, or slide, but you’ll also occasionally enter web-slinging mode where you have to use controlled swings to collect goodies and avoid hazards, a wall-crawling mode where you have to tilt your device to avoid falling debris and fire, and a freefall mode where you once again must tilt to scoop up vials and dodge incoming threats. You’ll also change areas every so often, starting from the rooftops but eventually ending up in Oscorp, on enemy ships, and more. The sheer variety both in play and cosmetics puts most other runners to shame. I was honestly very skeptical of the idea of a Spider-Man runner when I first heard of this game, because come on, Spidey shouldn’t be running everywhere, but Gameloft has actually delivered something that fits him just right.

That extends to the presentation, as well. The game is done up in a rich comic book style, with plenty of thick black lines and popping colors. Spidey and his foes animate nicely, and Gameloft has surprisingly put together a voice cast that sounds good instead of annoying. Spidey has a number of quips, and after a while, some of them do repeat a bit too much, but it’s not nearly as irritating as you might expect. The writing in the cut-scenes between story segments is also good for a laugh or two. The music is doing the usual skirting around Danny Elfman’s score from the Sam Raimi Spider-Man movies that we typically hear in Spidey games, but if it fits, it fits. I would absolutely swoon if Gameloft threw in the 60s theme somewhere, though.

The game does suffer from a few problems beyond the biggest one, which I’m saving for a surprise in the next paragraph. First, there are occasional issues with the controls. I’ve had a couple of swipes that weren’t recognized, which gets you killed in a hurry in a runner. Next, the art style does sometimes hinder the gameplay. It’s hard at times to get a good feeling for where ledges end and start, which can be a fatal miscalculation. Also, everything is so bold and bright that you’ll sometimes completely miss seeing the next obstacle behind the current one before it’s almost too late to do anything about it. Your eyes are so busy feasting that they become fat and complacent, leading poor ol’ Spidey into his doom. Oh, and of course, there are a lot of somewhat shifty grabs for your premium currency. The continue screen is pretty obnoxious, putting the button to use a precious ISO-8 right where your finger would probably be during play. I do give them credit for capping continues at a maximum of three, however, meaning you can’t strictly pay your way to the top. 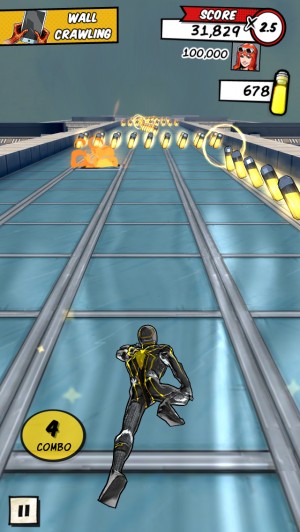 A lot of these issues are magnified by the biggest point of controversy in Spider-Man Unlimited. The game uses a stamina meter, giving you five plays, win or lose, before you’ll need to feed it some premium currency or take a ten minute time-out. This is a really brazen move for a running game, in my opinion. Part of what makes the sometimes-unfair nature of runners acceptable is knowing that you can get right back up again and take another try. No such luck here, and they don’t even do you the courtesy of topping off your stamina when you level up. There isn’t even a system like the one found in the original version of Iron Man 3, where there was a cooldown timer on armor repairs, but you could take another armor out in the meantime. It’s disappointing, especially with all of the stuff to do in the game. There are timed events and bonus missions, and you have to choose between taking a fun little endless run, tackling a story mission, or working on that timed goal before it expires.

It’s a real hose to an otherwise great game, especially if you make a couple of early-run mistakes. The stamina slips away too fast and restores too slowly. Throw in a few seemingly unfair deaths from swipes not registering or not properly judging where the next roof starts, and you can probably see how an exciting entry into a usually all-too-predictable genre still ends up feeling a bit sour. As I said earlier, I really like this game, and when I’m playing it, I can’t imagine a better take on the character within the constraints of this particular genre. Even all the random draw stuff is pretty fun, because I know I can’t just whip out my wallet and get the Spidey I want. It’s just that stamina meter that gets in the way, and there’s no way I can get around it short of feeding it my currency I’m saving to try to pull a rare Captain Universe Spidey.

I think Spidey fans and runner fans should definitely check out Spider-Man Unlimited simply because it does so much right. If you treat it like a King game, pulling it out here and there during your day, you’ll probably really enjoy yourself and not rub against the stamina meter too badly. I like to imagine the alternate universe where I don’t have to do that, though. Maybe I can catch a dimensional hole to Earth-8311. I heard they don’t have stamina meters there. Until I can find out for sure which one leads there and not to the Marvel Zombies universe, though, I guess I’m stuck playing this cool game as often as it lets me.