Nearly two years ago, or longer if you’re a PC gamer, we were introduced to the world and characters of The Journey Down ($4.99), a point and click/tap adventure game from developer SkyGoblin. It was a mechanically sound example of the genre with charm to spare, but it definitely suffered from the usual chapter one problem of doing a whole lot of setting up and not much paying off. If you played it, chances are good that you fell in love with its jazzy, dark atmosphere and lovable protagonist, Bwana. Chances are also good that after finishing the game’s two and a half hour adventure, you went looking for a magic lamp to wish up the next chapter. It’s been a bit of a wait, but The Journey Down: Chapter Two ($6.99) is finally here, and it’s an excellent continuation of the story.

When we last left Bwana, he was demonstrating his amazing piloting skills to his client, the lovely Lina, as they took off in search of the fabled Underland. We pick up soon after his landing, with everyone mostly intact, rescued by the crew of a mister ship. Soon, our group finds themselves in the seedy town of Port Artue, separated and on the wrong side of the law. It’s up to Bwana to get him and Kito out of the mess they’re in, reunite with Lina, and continue on their expedition to find out what happened to his father figure, Captain Kaonandodo. The story covered in this chapter feels a lot more satisfying and full, not least of which is owed to the length of this chapter being just about double the first chapter, or around five hours. A lot of things happen this time around, though with a promised third chapter to close out the trilogy, the biggest questions remain unanswered. At the very least, you’re not spending most of the chapter just fixing a plane. 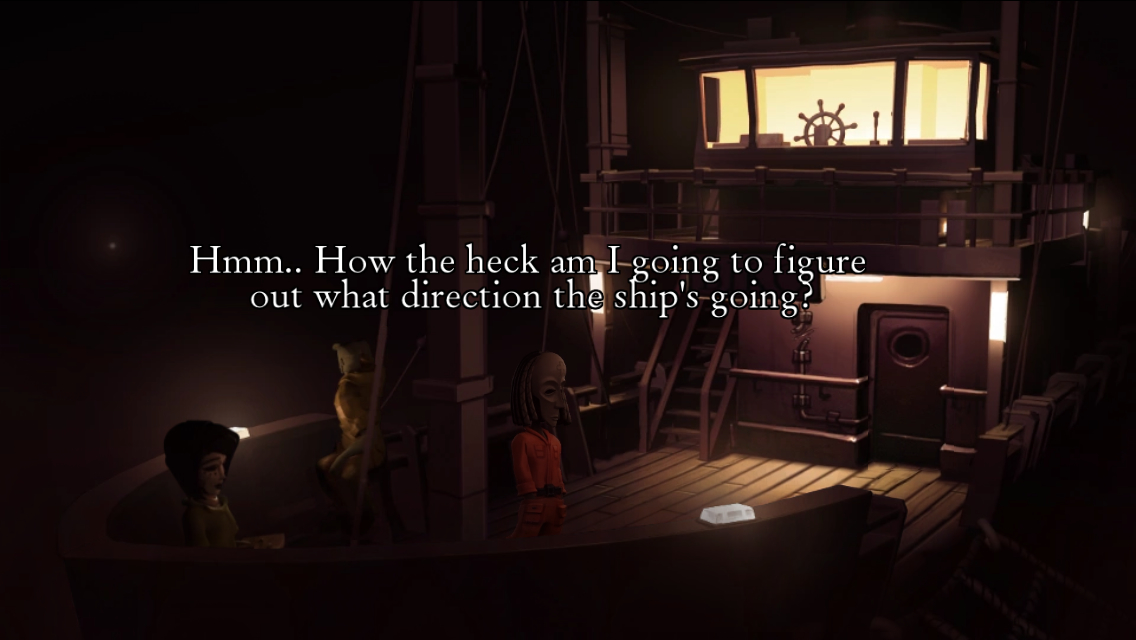 As before, you’re looking at a pretty orthodox adventure game in the latter-day Lucasarts style. The style of the game is unlike almost anything else. All of the characters cleverly have African-style masks for faces, which gives them a very unique look and also lets the artists get away with a bit less animation. The cast is even bigger than the first game, with lots of weird and memorable characters to interact with. Most of the game takes place in very dark, almost noir-like areas, but the game does play with your expectations a bit over the course of the chapter. As in the first chapter, every line in the game is voiced quite capably, and the game’s soundtrack is just fantastic. Work of this caliber coming from such a small team is almost shocking, and it’s easy to see why it took so long to develop.

The unique presentation is the main way the game differentiates itself from other adventure games. In other respects, it more or less walks the line, but it does so very competently. You can bring up nearby hotspots just by holding your finger on the screen, items are easily used by opening your inventory and dragging them onto whatever you want to use them on, and Bwana will go anywhere you tap your finger. The puzzles are generally pretty logical for a game in this genre, and the game is pretty good about limiting your options just enough to keep things from getting too complicated. In Lucasarts style, you can’t get yourself into any unwinnable situations and you can’t die, so there’s no risk in trying whatever crazy things you want. The only time I ran into trouble was when I had difficulty spotting an exit on a particularly dark background. I could have easily spotted it if I had dragged my finger around the screen, but it looked completely dark, so I didn’t bother trying. After that little snag, things generally went smoothly for the rest of the game. The game’s climactic puzzle is a pretty good head-scratcher, and it was pretty enjoyable piecing it all together. 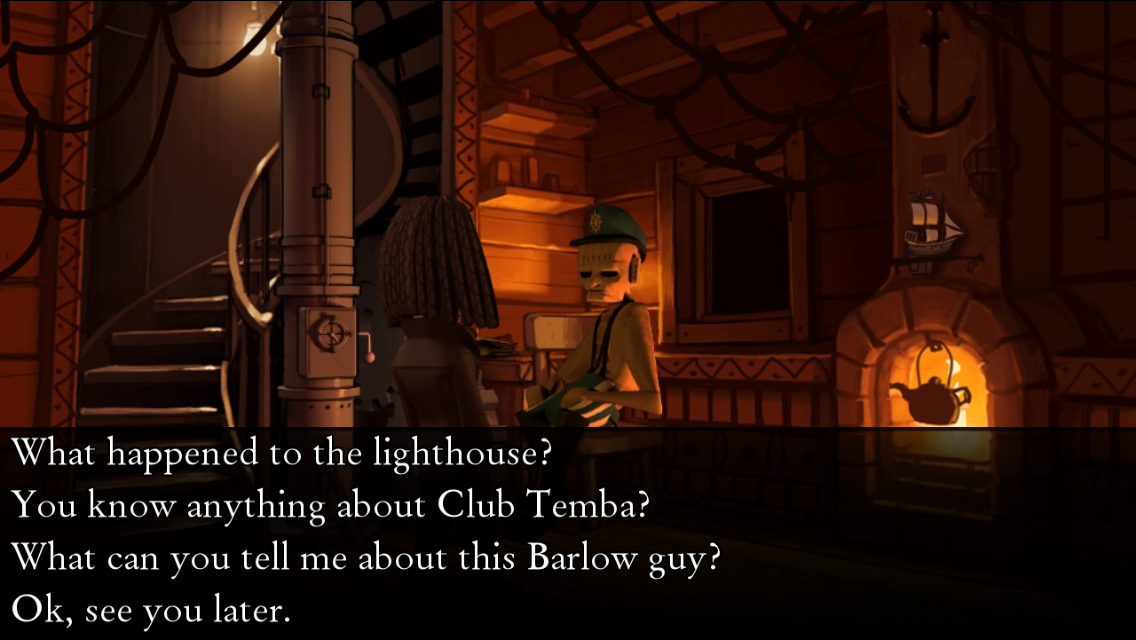 I feel that the heart of the game is in its strong core cast of characters. Bwana is a wonderful hero, a little bit naive, but eternally optimistic, and his brother Kito is even more so. I really like these guys, and I want to see them win. Bwana’s innocent nature and his sense of wonder at almost anything helps cover up the fact that he’s explaining a lot of things out loud to the player. I do wish there were more scenes with Kito, but perhaps moderation is to his benefit. He really is completely unflappable, and I love it. I’m not so sold on Lina, but if nothing else, she tends to bring a sobering dose of reality to the often cloud-bound Bwana.

The villains are solid enough, but they don’t leave quite as strong of a mark as our hero does. That’s fine, of course, it’s just that when a game reminds you so much of a Lucasarts adventure, you start expecting all of their staples to appear, and one of those things is a big, scenery-chomping villain. I’ve already mentioned the great side characters, but I’m going to bring them up again, because they’re worth it. Even though their parts are generally very small, just about every character you run into has some kind of quirk that virtually guarantees you’ll remember them. That’s not an easy thing to do properly. 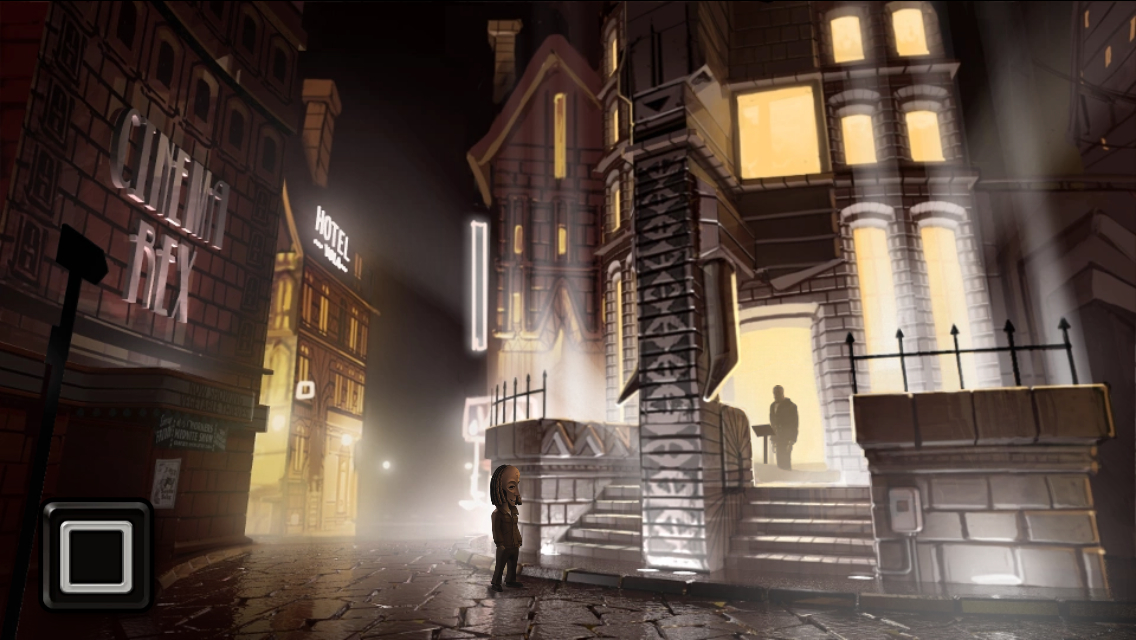 As long as you’re okay with the genre, there isn’t much to complain about in The Journey Down: Chapter Two. The pace slows down a little bit too much in certain sections, and there are a couple of puzzles where you basically have to brute force them, but when I find an adventure game that doesn’t suffer similarly, I’ll come back and admonish this game more for it. The length is great, both the amount and variety of puzzles are superb, the presentation is stunning, the characters are charming, and the story is compelling. The only grievous complaint I can levy against it is that we have to wait again for a while to get the ending of the story. If the third chapter keeps up the quality found here, the whole game stitched together will likely be one of the best traditional adventure games of the last decade or more. Don’t let it slip by you.