Ancient Battle: Hannibal($2.99) is the latest in the long line of historical battle sim games that Hunted Cow has made for iOS. Between Ancient Battle, Tank Battle: 1944($2.99) , and Civil War: 1863($2.99) and the franchises they comprise , they have created nine games across their three series since March of 2012. You might ask how this is possible and I think I have the secret to their prolific abilities. These games are almost direct map packs of the same base game. Now sure, new technology has been added like the ability to zoom. Graphical updates and new unique units(elephants are listed as unique, but they have been in other Ancient Battle games) get added with each title, but I can’t shake the similarity.

This game is as much a history lesson as it is a strategy game. This is probably the strongest argument that the game stands on its own. Without the historical background the game IS a clone of its forefathers. Sure you can skip through the text that accompanies each mission, but you really won’t be getting the most for your money by doing so. Each scenario is based off of a historic battle and you can play as Rome or Carthage. Your challenge is to maneuver and conduct your army to a better outcome than how history unfolded. 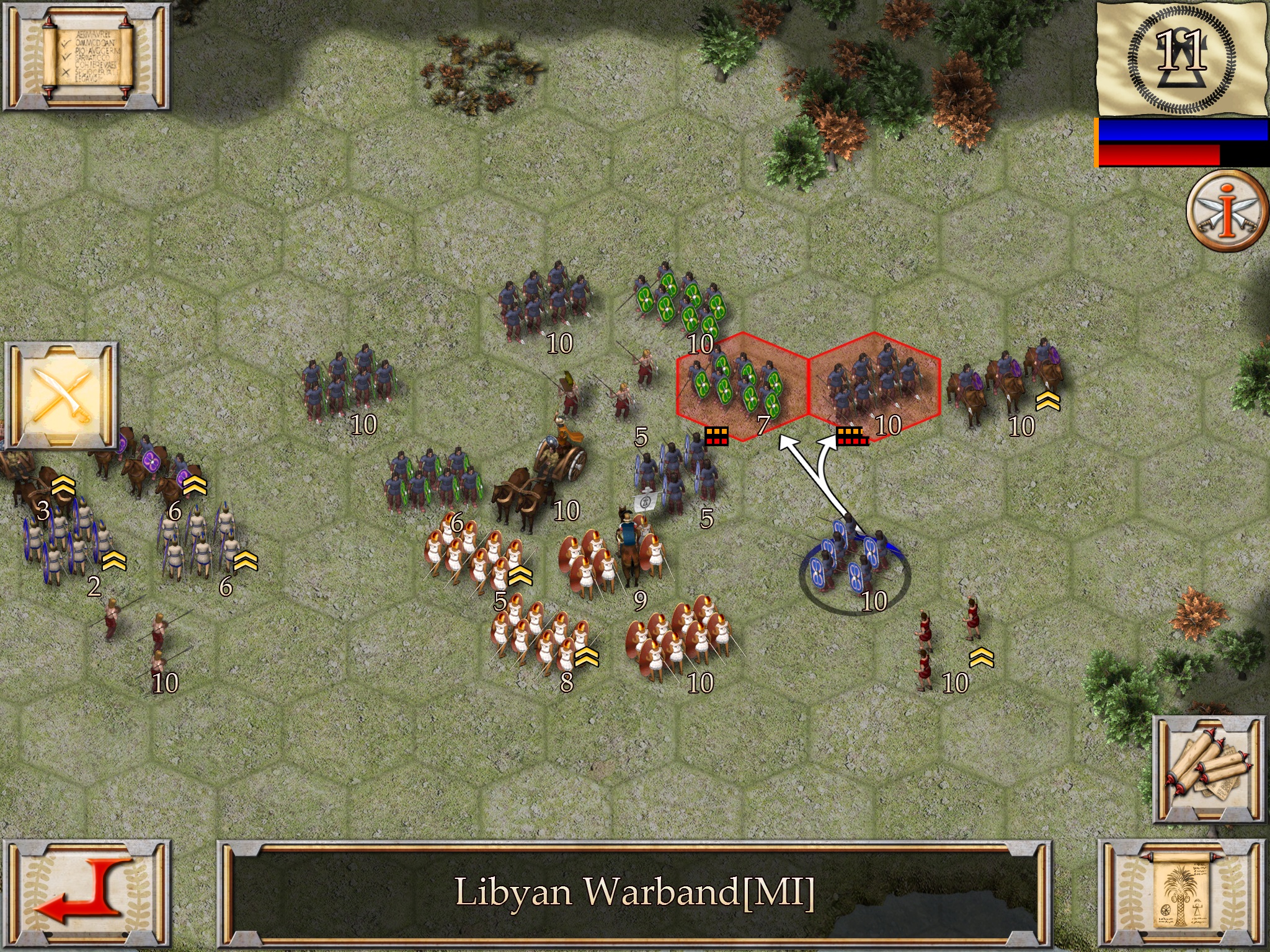 It might be common knowledge to a historian, but I’ll mention it here because it was something I learned during my research on Hannibal. He was one of if not the biggest threat to Imperial Rome. Over the course of two wars, the only way Rome was finally able to outsmart him was to copy his tactics over and over. This guy was the boogey man of the 3rd century BC. When Romans would curse about their misfortune they would say “Hannibal ante portas" (Hannibal is at the gates!). They had a serious amount of fear and respect for the guy. The under dog fight scene from the movie Gladiator carries that much more weight when you realize that Russell Crowe is killing off romans almost as efficiently as Hannibal and his Carthaginians, whom they had cast his ragtag band of gladiators as. The game has a solid amount of backstory and even though Ancient Battles doesn’t mention these tidbits, you are going to be getting a big helping of history as you play so get used to it!

Strategy in this Ancient Battles is the same strategy you employ in other Ancient Battles…or Tank Battles … or Civil War . Laid out upon hexagonal tiles and comprising of units that have specific strengths and weaknesses, the game isn’t breaking new ground in the strategy world. You can win basically each battle if you lead with light units that retreat from melee combat, make favorable trades, and line up flank attacks with fast moving units. The game has three difficulty levels that you can choose before entering a battle. The primary difference between the difficulties seems to be how many times you can make a boneheaded move and get away with it. Playing on the easiest mode means that you will only fail if you spend each turn making unfavorable trades or chasing light infantry units as they back away from you. Contrast this against the most advanced difficulty, which will probably only let you do this for two or three rounds before you get overwhelmed.

Graphically, Hunted Cow have made some marked improvements and units are cleaner and more distinct than their preious Ancient Battle games. With that said, the same hex grid and almost identical terrain are still present and accounted for. I don’t find it a very pretty game, but at the same time there is enough detail and animation work to suffice. The game’s audio is pretty satisfying. Hearing units of heavy infantry crunch into each other is really rewarding especially when you line up a charge and pave right over an enemy unit. The game music is not always present, but there seems to usually be a nice melodic swell as you get into the thick of melee combat.

With the number of iterations the Ancient Battles franchise has had, I expected to see a marked improvement which for the most part I have, but nothing here goes beyond expectation. Multiplayer support or even just the ability to choose which units your army deploys with could have added a lot of depth to gameplay. You can tell that with the development of Hannibal, experimentation and outward exploration are at a minimum. Anyone looking for a fresh new experience can probably continue looking, but if you love previous Ancient Battle games, there is enough here to love this one too.