I’m a big fan of the Kairosoft-esque simulator so when I heard that a 3D simulation title made in similar fashion and taking place in the music industry was in the works, I was a bit a intrigued. Alas, while TourStar (Free) succeeds in conjuring up some of the basic formula elements that make such games its incredibly basic approach leaves a bit to be desired. Even more unfortunate, the few facets that differentiate it from other games (namely the ability to purchase contest entries for actual concert tickets with in-game currency) don’t seem to be ready for primetime, limiting the actual appeal it may have for curious gamers.

From a gameplay standpoint, the easiest way to describe TourStar would be a simplified version of the Kairosoft formula for its simulation games. Players start out as unknown music artists with no fame and very little cash. Opening venues range from playing at birthday parties and house parties and offer little in terms of fame and cash. Fame acts as an experience system that lets you level up. Cash goes towards hiring new and better band members, crew, instruments, and ‘special effects,’ which all have multipliers for increasing fame, cash, energy and hype (a hidden variable that affects other stats). Essentially you earn fame to level up, which lets you unlock bigger venues to earn more cash and fame, and so on. 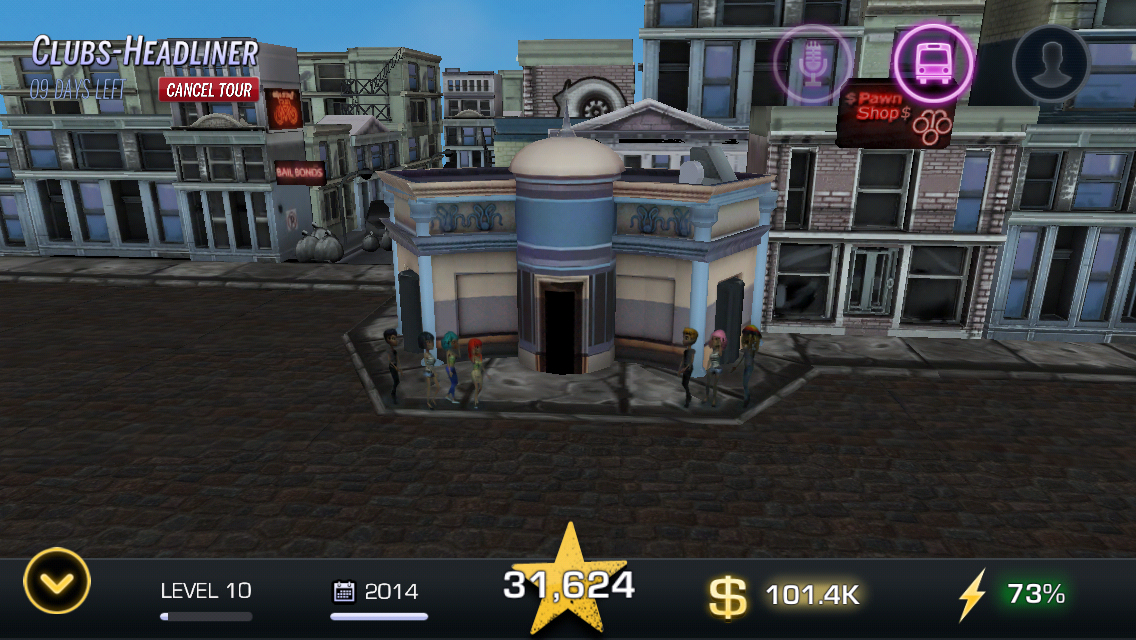 Alas, there’s little in terms of actually “playing” the game. Performing at venues is done automatically with any applicable multipliers from your crew and band being applied on their own. In fact, there’s really only two mini games that you can actually participate in that can affect how much fame you earn depending on how well you do (and they’re mostly optional). Meanwhile, randomized events can happen out of no where while touring and can bestow (or take away) fame and cash. At early stages the negative events can be a bit demotivating, but the longer you play, the less of an impact they really have. In any case, I found myself mostly managing the energy system which becomes an ‘issue’ during long tours.

Yes, there is an energy system, and it comes into play whenever you go on tour. Going on tour expends energy, and the aforementioned mini-games also take energy to play. If you run out of energy, there’s also in-game ‘activities’ (such as going to a spa) which offer temporary boosts to energy. Upgrades such as better modes of transportation can also increase energy replenishment while on tour. While IAP does exist to instantly replenish energy, it really is not necessary in any way, shape or form as energy management while on tour is an easy feat to accomplish. 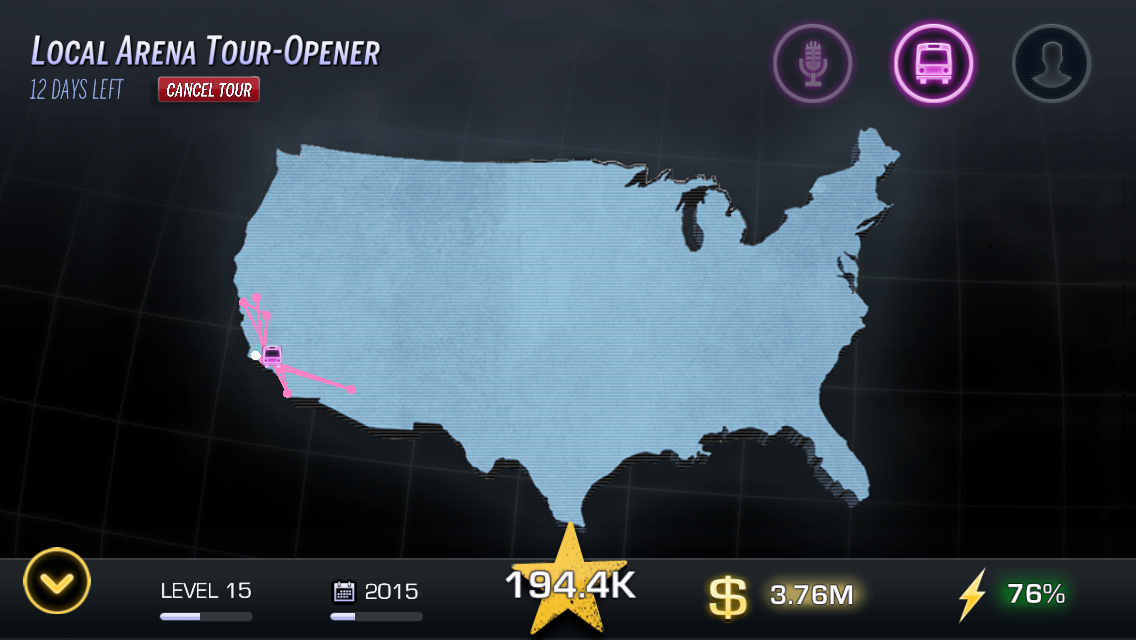 The biggest concern I have with TourStar is the simple fact that you hit the end-game relatively quickly. Similar to other numbers-based simulation titles, novices start out earning meager amounts of fame points and money, but as you gain levels and unlock bigger venues and more band members to recruit, the amount of fame and cash rises exponentially. After 4-5 hours of playing, I found myself definitely breaking through any semblance of a normal progression curve and was making far more money than I knew what to do with. Normally, the game starts to lose its appeal once it hits that point, but TourStar’s ability to offer contest entries for in-game currency makes the replayability

In addition to using in-game cash to upgrade band members, purchase instrument upgrades and the like, you can also use the currency earned in-game to purchase contest entries to win real-world concert related prizes, such as VIP upgrades to whole VIP packages themselves. Interestingly enough, the prices for contest entries are actually incredibly reasonable, with it being pretty easy to earn enough cash to buy multiple entries once you get towards the later levels and venues. Concerts not your style? TourStar claims that it’ll be offering an ability to purchase ringtones for in-game cash in the near future as well. Assuming there’s an entry out there for a concert you’d actually want to go to (an issue for me, alas), or a ringtone you’d enjoy, these rewards alone has the potential to significantly expand TourStar’s potential replayability. 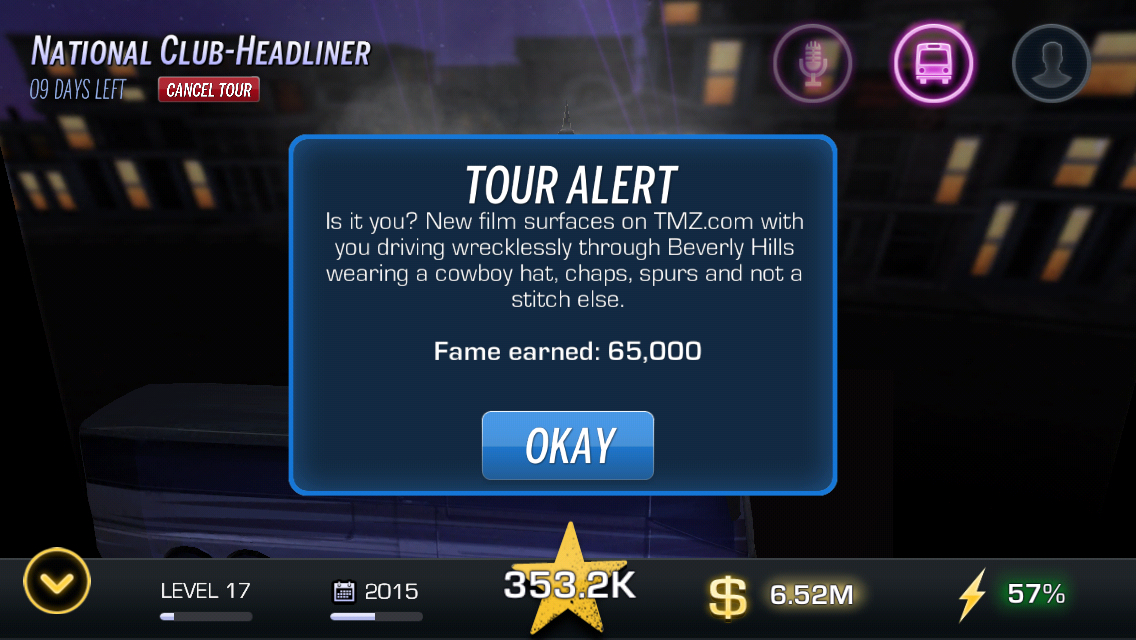 Unfortunately, despite the novel appeal of TourStar I encountered numerous bugs plaguing the game. The aforementioned concert entries and ringtones require that you create a free account within the game’s preference, but it the account creation system has been broken for at least a few days. In addition, I encountered numerous visual bugs that would prevent me from advancing to different gameplay screens, forcing me to force quit the app to restart. That’s not necessarily a big deal, but the broken account system is going to quickly become an issue if players find out they can’t redeem their cash for entries.

I can appreciate the novelty of advancing in the music industry that TourStar offers, even if the actual gameplay isn’t anything that hasn’t been seen before. Even with the quick advancement to end-game and its pretty simplistic play style, I’d argue that TourStar might be worth a purchase beyond its paywall just for the potential to purchase contest entires. Unfortunately, until that system is actually working and all the other kinks are ironed out, I have a hard time really recommending it.