There’s a pretty decent assortment of Adventure Time games available on the App Store now, and while they’re not exactly blazing trails for the hobby, just about all of them are quite a bit better than a lot of licensed titles end up being. Adventure Time has already tackled the side-scrolling runner, sort of, in Ski Safari: Adventure Time ($0.99), and now it’s taking a swing at the behind the back runner with Time Tangle: Adventure Time ($2.99). This game is coming at us from the developers of Indiana Stone ($2.99), TwinSky, and like that game, it’s got a very different idea of how to approach a well-mined concept.

There’s a pretty firm template set down for this type of game on mobile devices, and it’s basically a score/distance attack game that starts off easy and very quickly becomes a serious test of reflexes. Most of them also throw in some coins to collect that you can exchange for doodads, whether they be power-ups or just something cosmetic. There’s no real goal beyond going as far as you can, and you know, that’s a pretty good concept for a game. You have a little time, you open a runner, collect some doodads, get a new hat, and feel both entertained and like you made a little progress. I’m definitely not going to be the guy to knock it. That said, I feel like there could be a just a little more diversity in the behind-the-back runner sub-genre, especially when I look at the side-scrolling runners and see quite a few different ideas. Some are level based, some have heavy shooting mechanics, some have a rhythm game feel to them, and so on. 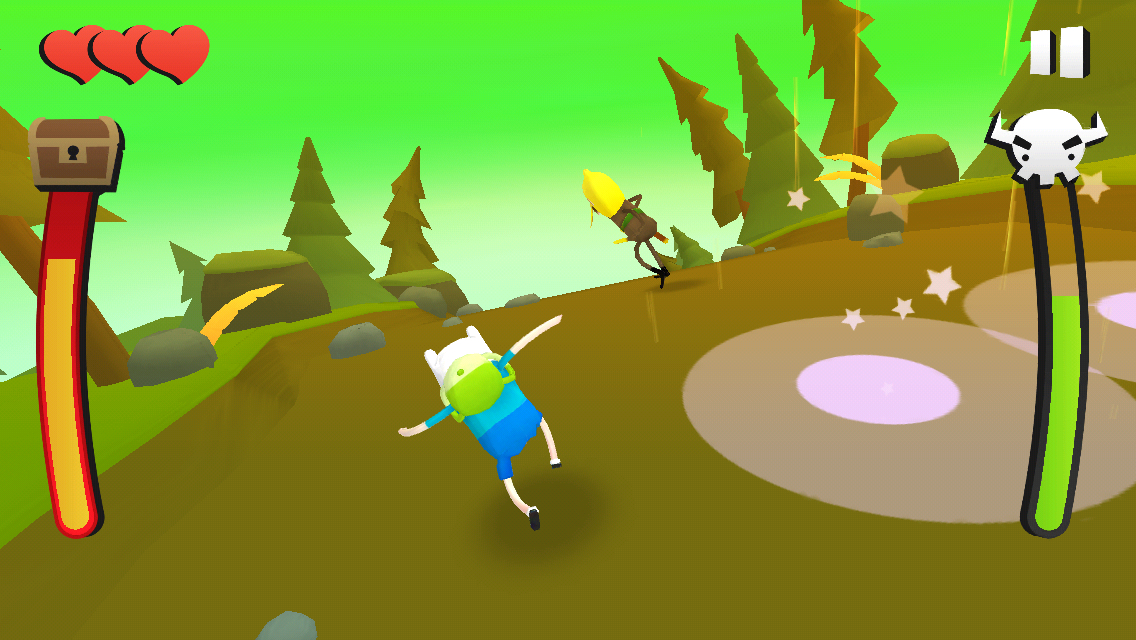 Behind-the-back runners, on the other hand, seem to come in two basic flavors: run endlessly with doodads, and run endlessly without doodads. The main variation in the sub-genre is whether it’s tilt or swipe to move, and that’s kind of sad. You might get the odd one that breaks ranks, like the sublime Boson X ($2.99), but for the most part, everyone’s just chasing Temple Run (Free) or Subway Surfers (Free). I bring this all up because Time Tangle has a very unusual approach to behind-the-back running. First of all, it’s very much a stage-based affair, complete with bosses to fight. During the main game, how far you run is pretty much irrelevant. It’s about completing your quests, earning crystals, and defeating enemies. Once you collect enough crystals cumulatively on a stage, you’re off to the boss, and if you take them down, it’s on to the next stage. There’s even an actual ending.

The next interesting point is that there are no IAPs in the game whatsoever. In fact, other than keeping track of your crystals on each stage, there isn’t anything you carry out of a stage with you. You can collect coins during play, but they simply fill up a meter that grants you a one-use power-up of your choice when you top it off. Finn has all of the abilities, powers, and skills he’s ever going to have right from the get-go. Outside of filling up your gallery, which is worth doing because it’s fun to read the descriptions, all you need to do is make sure you survive the stages. Which brings me around to the last point that this game does differently, the difficulty. Most runners give you about 30 seconds of gentle jogging before they start to ramp up, but once they do, they get pretty tough in a hurry. Play sessions are usually meant to last a few minutes at most. 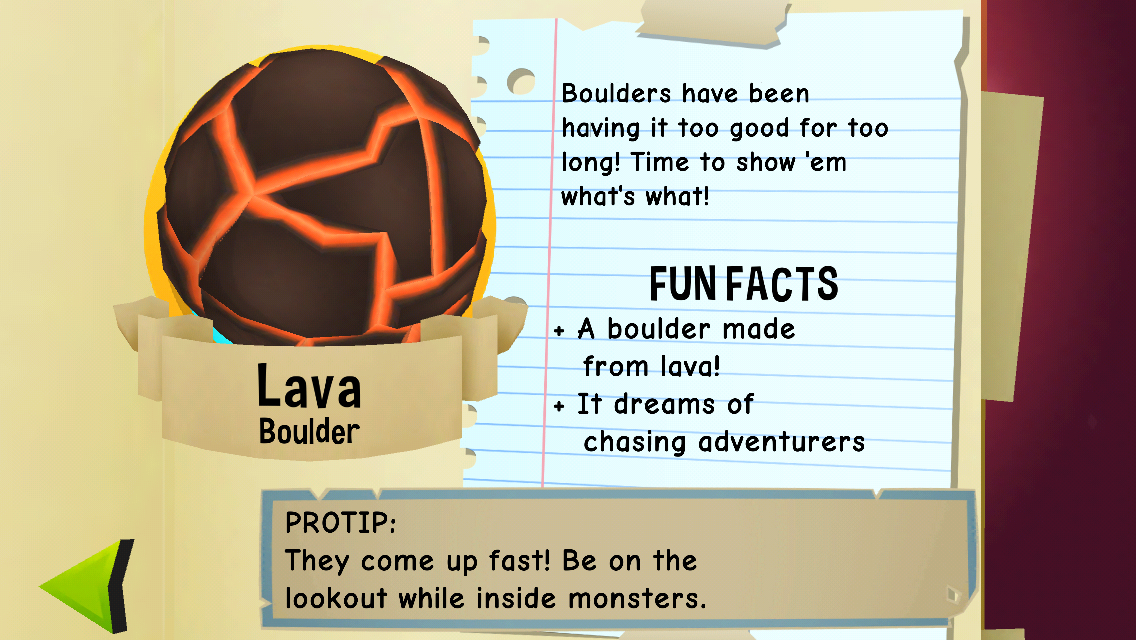 Time Tangle is a much more gentle game. There are three difficulty settings, and you have to complete one difficulty level before you can play the next. The normal mode gives you a reasonably relaxed experience, particularly if you’ve played a lot of runners. The bosses might give you a little trouble here and there, but it’s very likely you’ll earn all the crystals you need to reach the boss in a single run. Hard mode, on the other hand, has some teeth to it, though I think it’s still very manageable for most players. The last difficulty setting is crazy mode, and that one is actually pretty tough. If you manage to clear all three stages at all three difficulty levels, then and only then will you unlock the game’s endless mode. Even if you’re terrible at these kinds of games, you’ll have plenty to play in Time Tangle.

The story basically has Finn running and punching his way through different time periods, trying to collect time crystals and pieces of the Time Totem to fix the chaos he inadvertedly wrought. The default controls are pretty simple, with a touch on the left side of the screen causing Finn to jump, and a touch on the right causing him to punch. You can hold down on the right side to charge up a super powerful punch. You can move Finn back and forth by tilting your device. Just in case you hate tilt controls, though, the developers have kindly included a second control option that uses arrows and buttons instead. Both setups worked nicely for me, though I tended to favor the button setup for its precision during boss fights. 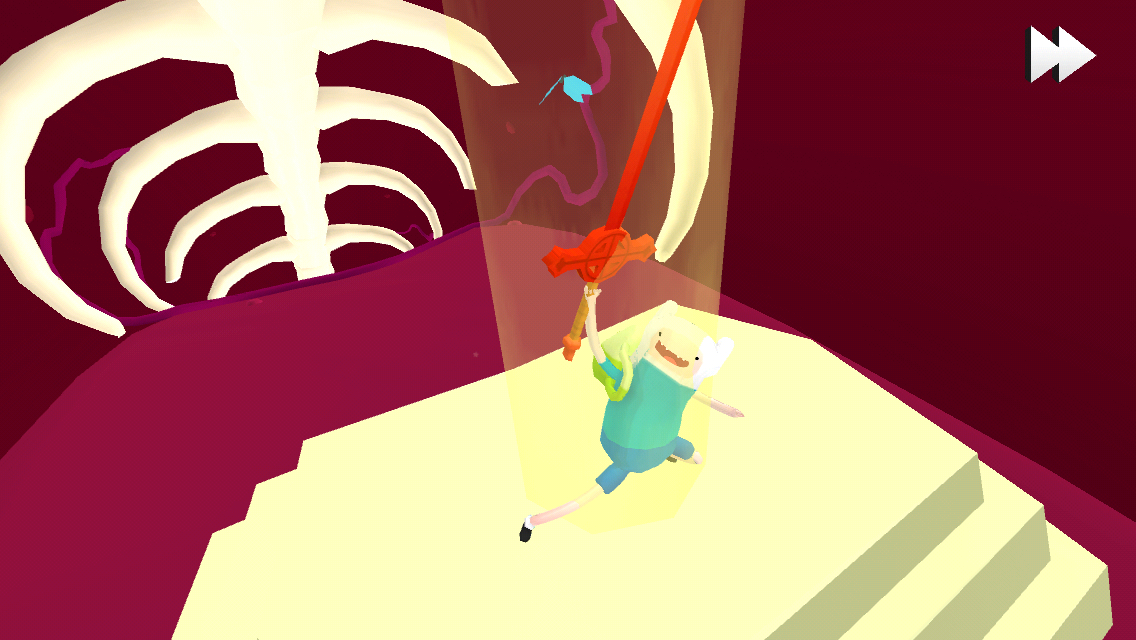 Time crystals are awarded for completing quests, which are given to you one at a time randomly. They come in a few different types, including chases, deliveries, rescuing friends, and collecting stuff. Deliveries are the simplest quest, and just involve running a certain distance to bring one friend to another. Chases and rescues both require you to use speed boost ramps around the level to help you catch up to one or more enemies. You’ll have to fight a stronger enemy at the end of these quests. The collection quest just has you collecting a certain number of various objects that are scattered around. As soon as you finish the quest, you’ll be rewarded a number of crystals, and given your next quest. Boss stages always involve the same quest, a showdown, that has you picking up a weapon of some kind and then going to battle the boss. Beat the boss, and you’re free to move on to the next stage.

There are power-ups you can earn in the stages by collecting enough coins, and you’ll also be able to call on your friends for help if you rescue them or find them on the way. There’s actually quite a few different types of power-ups, and although most of the friends are basically bombs with different animations, a couple of them do something different like healing you. Many of the power-ups even cosmetically change Finn, which is a cute effect. Finn’s appearance also changes according to how many hearts he has left. If you’re down to a single heart, the poor kid looks like he just called Mike Tyson a sissy. 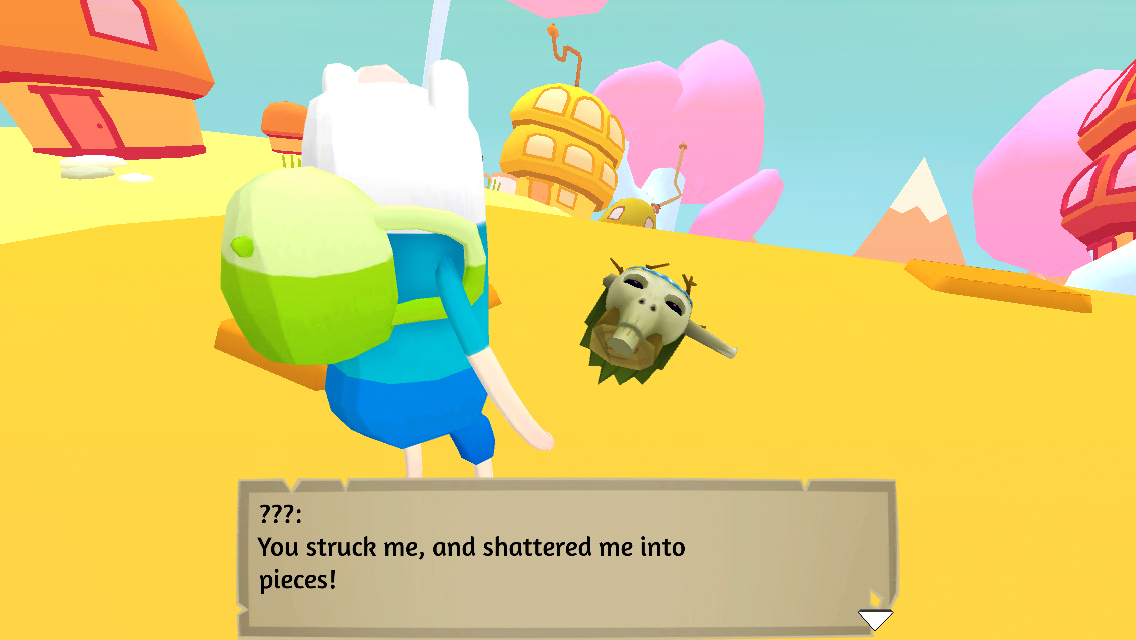 Of course, the major selling point here is the Adventure Time license. Every character is voiced by their appropriate actors from the show, and Jake actually does a fair bit of talking since he acts as an advisor to Finn. Although it’s in polygons instead of sprites, the game still does a great job of capturing the show’s colorful and sometimes bizarre visual style. Besides the voices, the music and sound effects are also pretty faithful to the show’s usual fare. It’s not exactly a story-heavy game, but what’s here is well-written and funny, and even simple things like menu labels have a touch of humor to them. The gallery descriptions especially are a lot of fun to read, and they’re a particular stand-out.

Time Tangle succeeds by offering a nice change of pace from the usual behind-the-back runners. It’s less of a quick time killer than it is something you sit down and play for a while, and that’s pretty unusual as runners go. It also makes nice use of its license, though I’m beginning to think the Adventure Time license can fit just about any game if the developers put their minds to it. It’s probably not challenging enough on the high end for expert fans of the running genre, but they’ve at least got the endless mode to look forward to, with Game Center leaderboards making sure there’s always some kind of challenge around the corner. Fans of Adventure Time or anyone looking for a bit of a different runner should check this one out.