I’m not surprised that Domowicz Creative Group has nothing new on their site announcing the release of The Manhattan Project ($6.99). The last update mentions a potential november 2013 start date for a Kickstarter campaign. The campaign that ended last december did not reach it’s goal. While I remain unstartled about the lack of updates on their site, I am kind of surprised this game got completed. I am torn about how I feel about the release. Part of me wishes it had not been released without proper funding. Another part of me was happy to see it out on iOS, but not like this. Not like this.

Let me first take you back a step and talk about The Manhattan Project, the actual physical board game. This is an amazing board game. It is the best worker placement game I have ever played. I love Lords of Waterdeep ($7.99) and I love Puerto Rico ($3.99). These are two games I cannot get enough of, but they dont hold a candle to The Manhattan Project. I have not had a chance to play other noted worker placement game Pillars of the Earth, but of the games I have played The Manhattan Project is top dog. The features that seals the deal for me are the espionage and plane construction aspects of the game. Being able to wreck someone’s set up or piggyback on your opponents’ hard work opens up a huge array of options that let you directly interact with the other players in the game. This is something that is not explored very much in other games in the genre and gives a noticable edge to TMP. 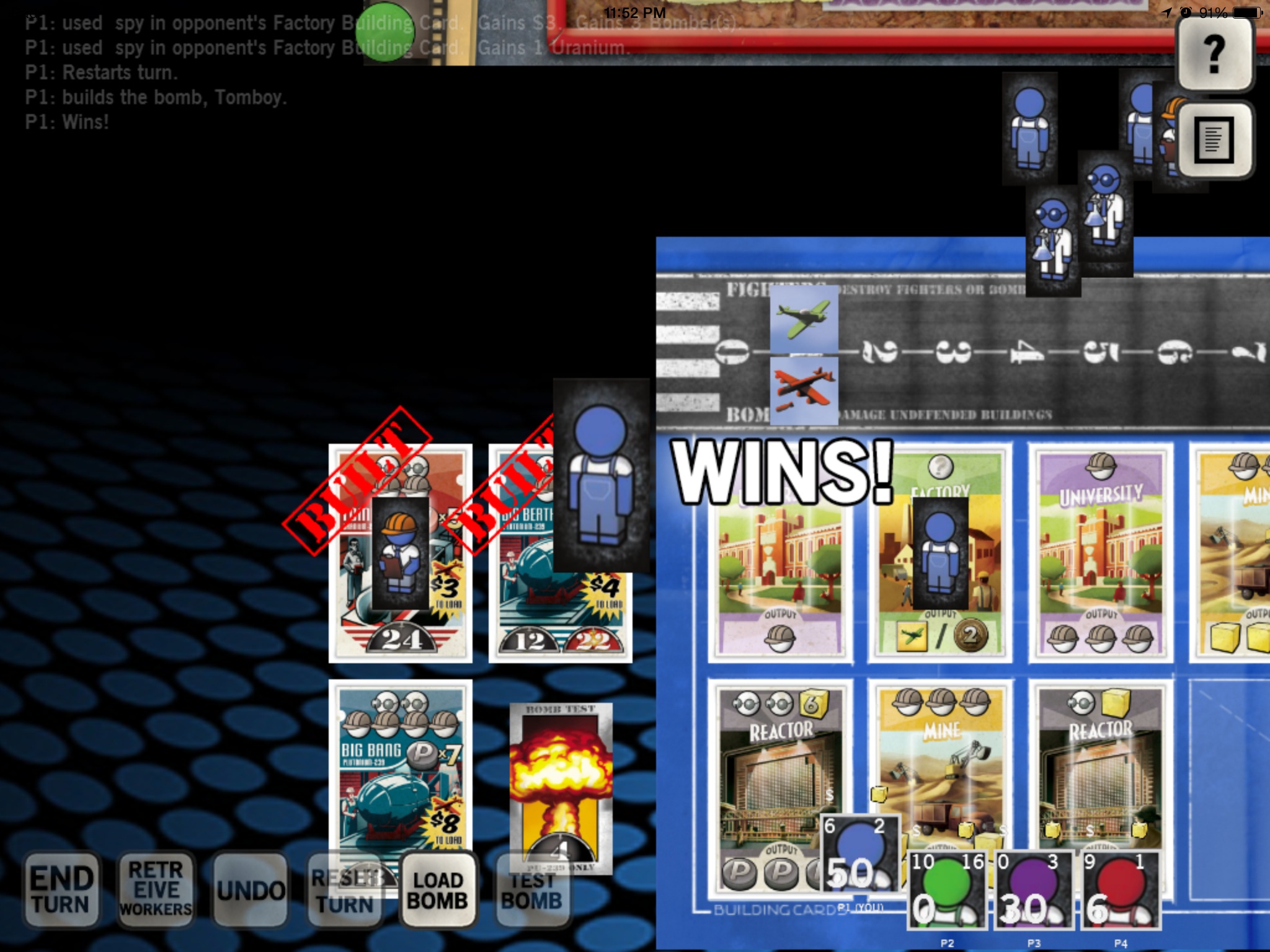 A good worker placement game will put you in a position to be able to predict your enemies’ next moves. A great one will give your opponent the chance to bait that prediction. The Manhattan Project does both of these as well as give the opportunity to capitalize on successfully pulling off these mind games. This layered model of strategy is fantastic at creating a deeply rewarding non-random gameplay experience. If I were a board game reviewer, the physical version would get my 5. Unfortunately this is not the case. If you looked at the score before you started reading, you might be wondering what could have gone wrong with the app. Well a lack of funding apparently buys you a whole lot of wrong.

The first thing I did when I fired up the app was to look for a tutorial. Sadly a tutorial is a feature you will not find in this app. If the only flaw I could find was that I would have to read the manual… manually, it would have probably been on its way to a 5 star review. Did I mention yet how eager I was to give this a 5? Another downgrade that I wasn’t expecting is that the AI only has a single difficulty setting. You cannot set the difficulty of the AI. I was still hopeful as I prepared to initiate the game on my iphone. As soon as it loaded I noticed that there is a major issue with the visuals on the iphone. Everything is super tiny. Miniscule. Microscopic. Can I stress to you that you should not play this on a non-tablet? So after switching devices I dove in and started to enjoy the game. Once on my iPad, the game plays quite well. Visuals of the board and pieces are solid. 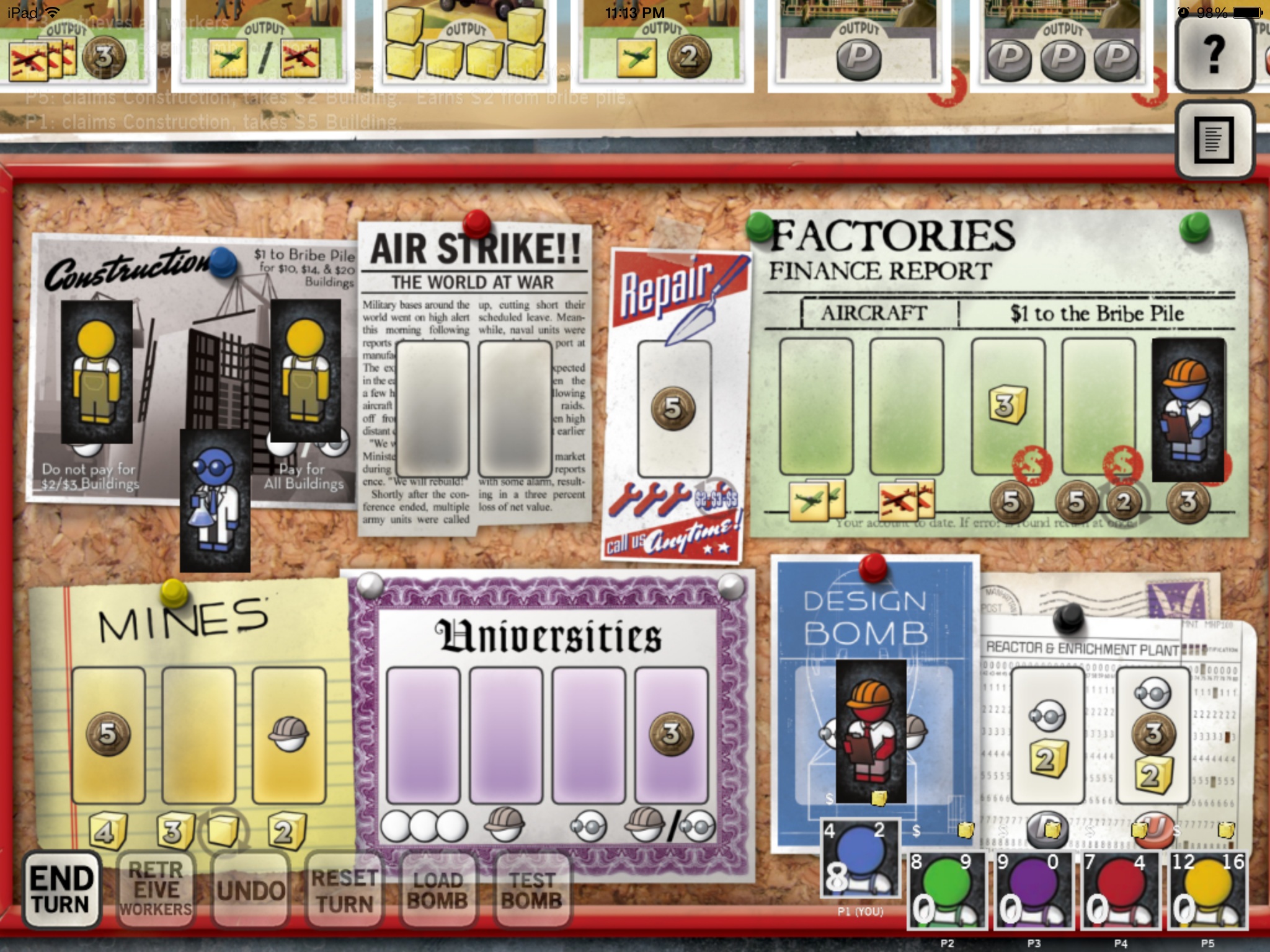 At this point I was starting to doubt my previous hopes for a 5 rating on the game. I knew though that once I got into the gameplay my fears would be calmed by this awesome game. For the most part, this was what happened, but once again I was interrupted, this time by a weird design decision. Almost everything on the map: tokens, currency, laborer chips, construction cards, and bomb cards are moveable. You can drag them around and not just yours, but your opponents too. If you drag them far enough, they will snap back but it is a huge annoyance dragging a dude to a card only to then start dragging the card around if your finger slips. I can’t think of a reason why they did this and after a few mis-taps it gets very frustrating.

With all these negatives piling up, one thing could really keep the app afloat and even redeem itself would be some solid online multiplayer. This is probably the biggest negative that the game has. As bad as it is that there is no async play, thats not the worst thing about the online play. You have to make a room name to create a game. In order to join a game, you must know the name of the room. There is no list of room names. You either know it or you dont. I don’t get this. The only way you can get online is if you know in advance what name someone put on their room. This was the biggest concern to me, that people are not able to go out and search for online games. 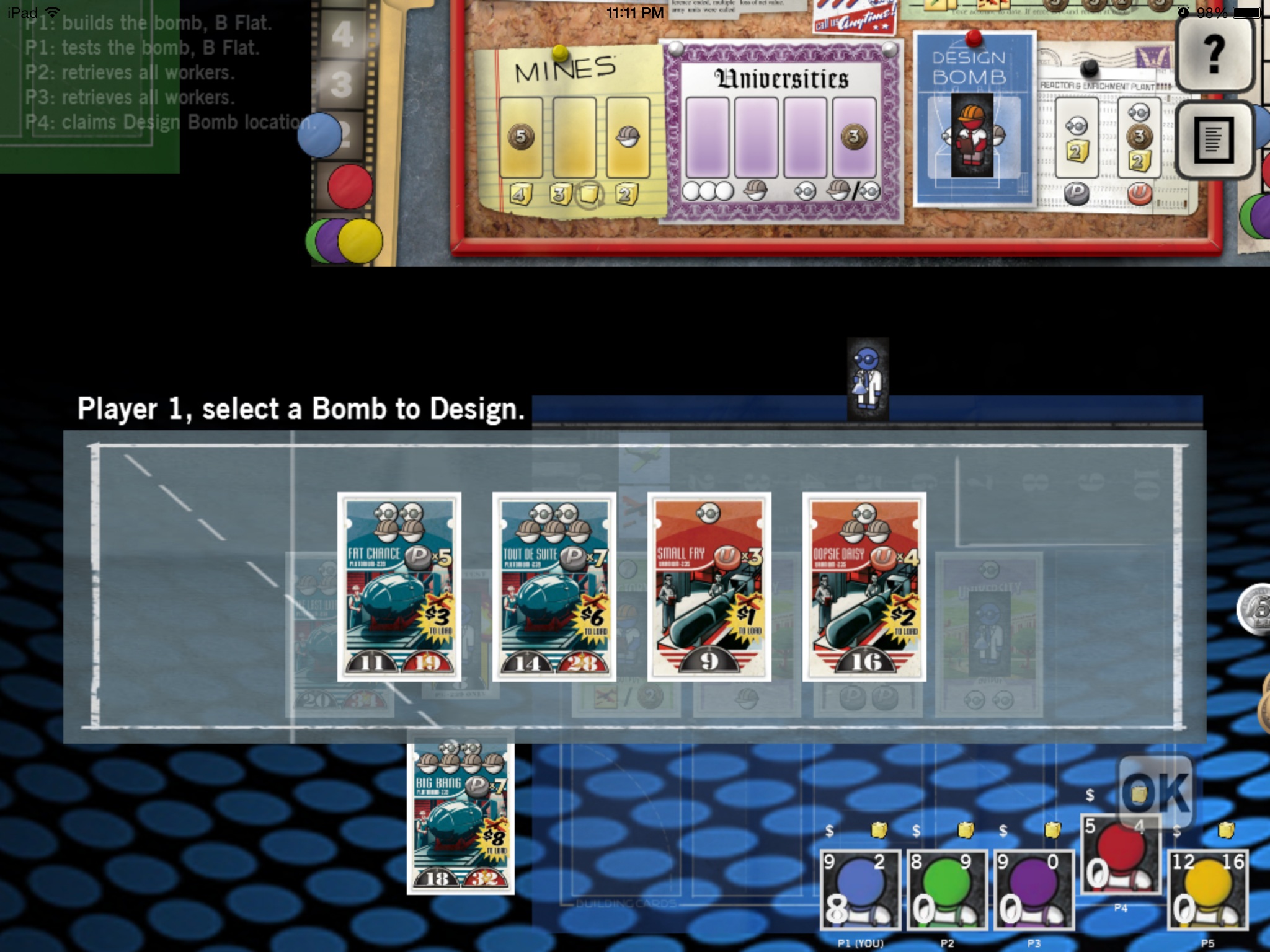 Even though you don’t have to look far for a good worker placement app, you will have to look further than The Manhattan Project. It pains me to say it, but even though it is a better core game, I can’t see myself sticking with it like I have for other worker placement games. With such a solid core game, I have high hopes for promised updates Minion Games have made. The fallout of the failed kickstarter is currently too toxic for this die hard fan of the board game, but the future is still bright for this juggernaut.