At times, it’s hard not to anthropomorphize Kemco as that student who is always in such a rush to turn in their assignment that they cut every possible corner. This behavior is particularly evident in the works of developer Hit-Point, who have so much potential that seems to get thrown under the bus in favor of churning out a half-dozen RPGs per year. Rusted Emeth ($7.99) is, sadly, a near-perfect example of both what Hit-Point does well and what they do poorly, another strike against my hopes of seeing this developer actually have some time and money for their projects. They’re trying so hard to do something new, but on the way, they’re making more sloppy mistakes than ever before.

In Rusted Emeth, you play as a hunter named Jink. He’s an orphan (of course!) whose town was destroyed (of course!) in a mysterious incident a few years back. These days, he gets by with the help of the voice in his ear, his buddy and mechanic Nick, who supports him on his missions to hunt dangerous monsters for wealth and glory. His routine life is disrupted when he gets a couple of very odd requests one after another, one from the mysterious girl Rinne, and another from a sassy hacker named Nao. Soon, he’s off on a mission to take down an evil corporation that is using very diabolical means to suck the planet dry. I wonder if they had something to do with what happened to Jink’s hometown? Hit-Point’s never been very strong with their stories, and this game is no exception. The cast of characters is absurdly small and kind of unlikable outside of Cornelia, who is only likable because it is scientifically impossible to dislike a mech-riding cat. 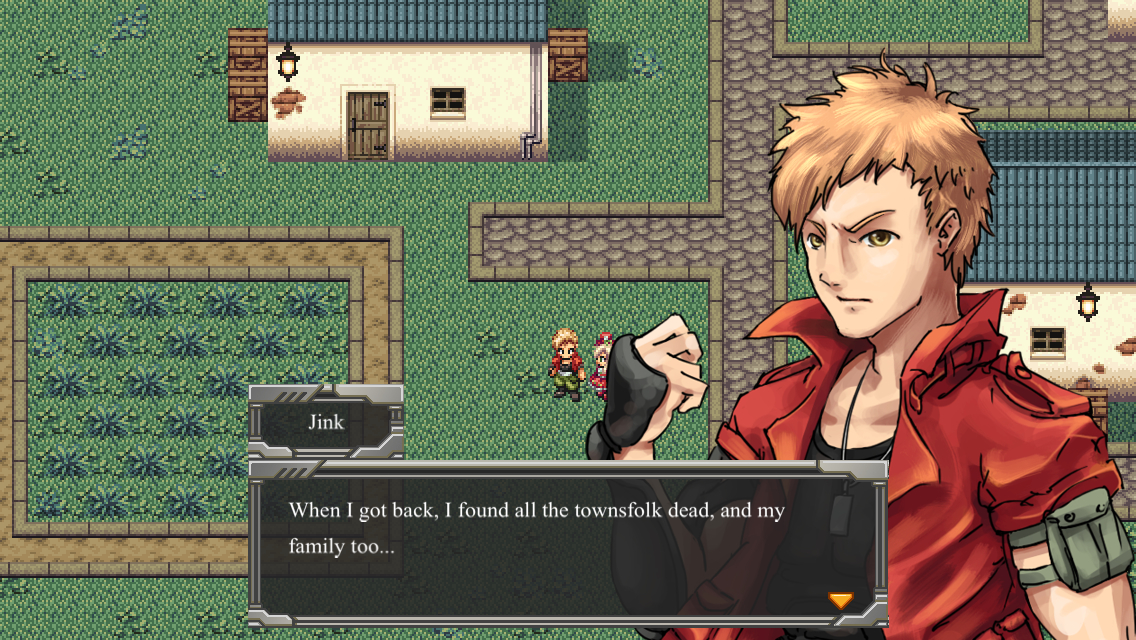 I get the impression Hit-Point put a little more effort than usual into the story. There are now events where you’ll have to make a choice that will have an effect on people’s opinions of you. Your reputation with the other characters affects the ending, and you can also get a few nice items out of it if you’re skilled at choosing the obviously-correct option each time. It’s largely for naught, however, since the characters are dull and the dialogue is truly awful. Some of that can be ascribed to the poor translation, a jarring shift from the wonderful work on Kemco’s last RPG, EXE Create’s Fanatic Earth ($7.99). There’s nothing remotely natural about the way characters speak in this game, with people breaking out into bizarre expository dialogue, overusing tag questions, and just generally speaking in a very awkward manner.

A bad story and boring characters are the usual state of affairs for this developer, however. What they typically do well is in creating interesting gameplay systems, especially with regards to character customization and crafting. This game certainly doesn’t disappoint in that regard. Borrowing liberally from the tank system used in one of their previous games, Chrome Wolf ($7.99), Rusted Emeth introduces Golems, mech suits equipped with heavy artillery and powerful defense. Unlike that earlier title, you spend most of your time in this game in your Golems, only getting out to explore towns or branches of dungeons too tight for them to fit into. You can tinker around with various stats on them, which is quite enjoyable since there’s a bit of a give and take to increasing different stats. 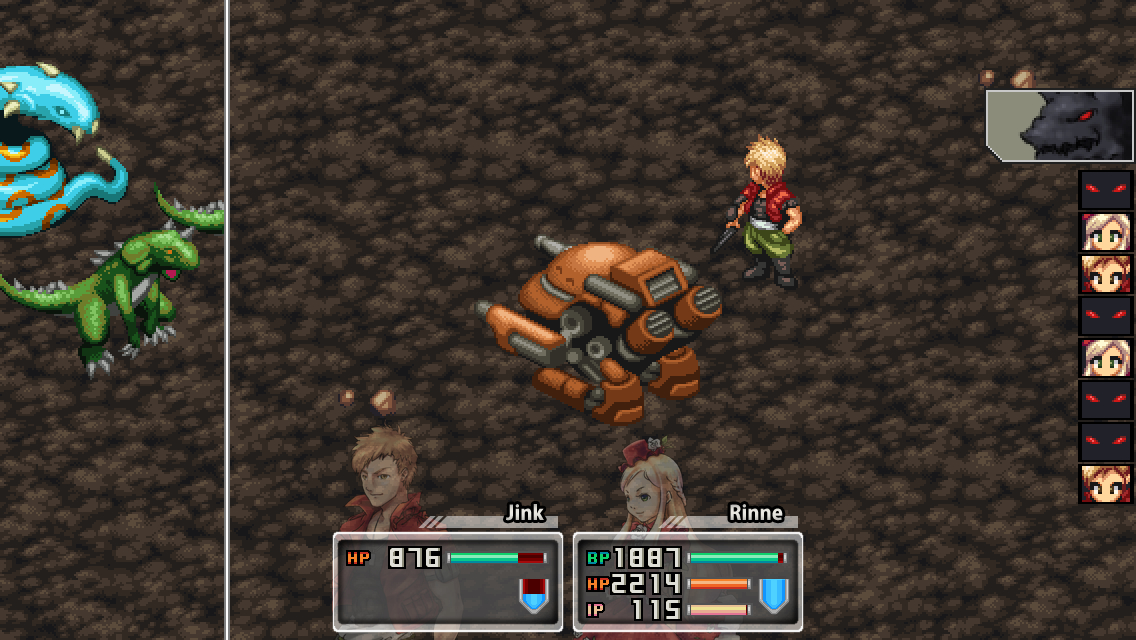 There is also a crafting system where you can create new items and gear from parts dropped by enemies. It’s not really in your face this time around, and it’s more just handing things over to a particular NPC in exchange for stuff, but it’s there. Combined with equipment you can find and the stuff in the shops, you have quite a bit of gear options for your characters. It’s not always just a straight upgrade, either, as a lot of the gear will boost one stat at the expense of another. You have to consider what kind of character or Golem you’re putting together. The other familiar system making a return is the quest system, which allows you to accept sub-quests at any hunter’s building in the world. You’ll automatically head out to the location of the quest, and when you’ve completed it, you can turn it in for a reward. It’s a good idea to do these optional quests to earn extra money, because you’re going to need it to keep your Golems up to date and in good working order.

That’s an important thing to do, because the way the difficulty ramps up in this game, you’re going to be watching your Golems explode again and again. They’re great for taking out large groups of enemies, but if you don’t keep investing in them, they quickly become glass cannons. By contrast, your characters on foot are quite capable of dealing and taking damage, and since their power is largely governed by their level, if you’re not conscientious about powering up your Golems, they may well end up stronger outside of their mechs than inside. That said, with the exception of the final boss and a few of the optional hunts, Rusted Emeth isn’t a very challenging game. You’ll face a ton of random encounters that hound you every few steps, but almost every fight will be over in the first round if you’re suited up. 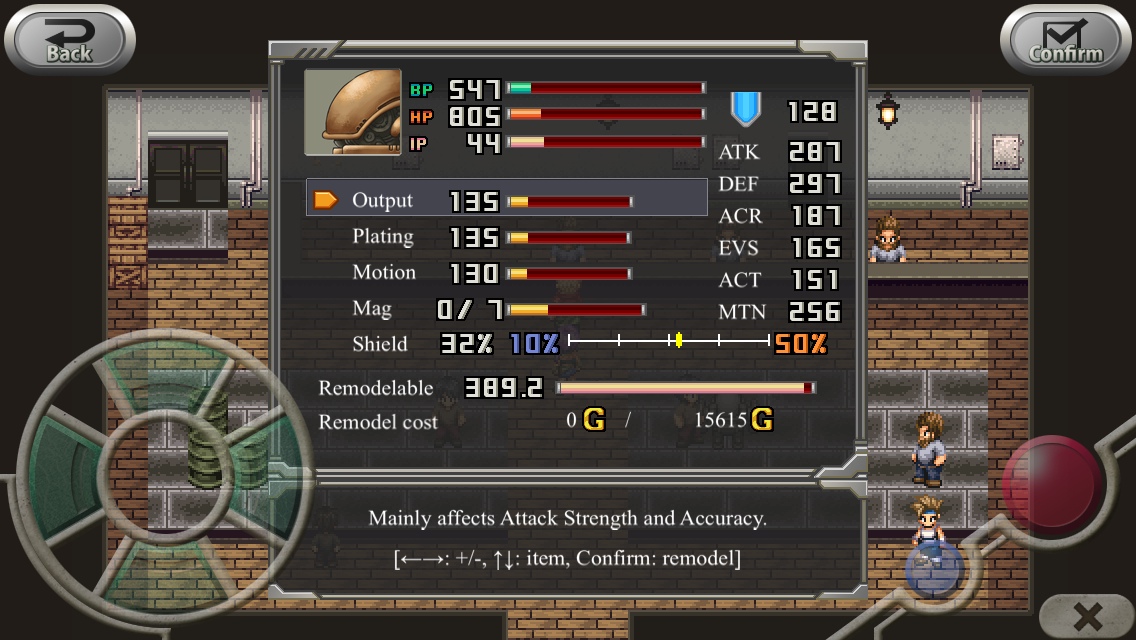 In longer fights, the combat system shows off a few unusual ideas. First off, characters, Golems, and enemies all typically have shields that restore a little bit each turn. Attacks will wear down the shield, and the closer to empty it is, the more damage attacks will do. For bosses, you need to chip down the shield with one or two of your other team members before you can really unload a lot of damage into them. It’s a cool twist that fits the theme well. Golems need to be careful of their energy reserves, since bigger guns will use up more with an attack than is restored each turn. You can also get special ammunition for your Golems if you’re willing to pay the price for one-time use attacks. Golems and on-foot characters can also make use of special attacks if they’re equipped with a certain type of accessory. You have lots of options in combat, even though 99% of the fights will be wrapped up with one touch of the fight command.

The dungeon layouts are decent enough, with branching paths and a lot of twists and turns that lead you in circles if you’re not paying attention. You’ll be revisiting each one several times if you’re doing the sub-quests, and they don’t really hold up that well under those conditions, but they could be a lot worse. The world itself is surprisingly small, and the main story somewhat short, and depending on how much side content you chase after, you’ll probably have your first playthrough wrapped up in anywhere from 10 to 15 hours. Of course, there are different endings that require you to start from scratch and make all your choices differently to see, so it’s probably best that the game is on the short side. 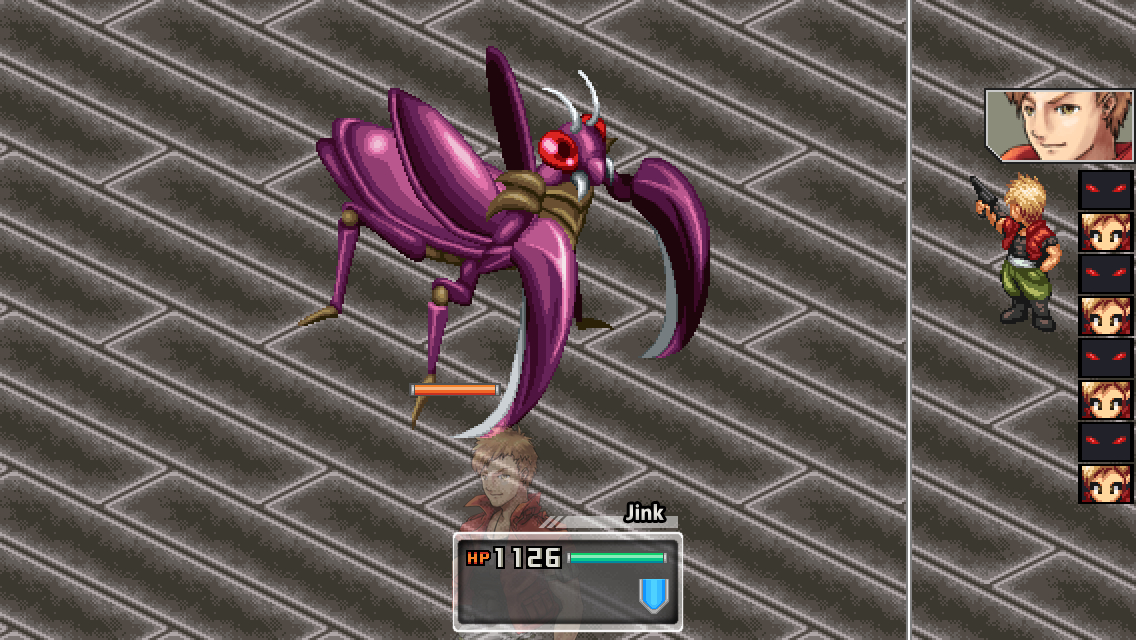 My biggest problem with Rusted Emeth is just how many stupid little inconveniences permeate it. First, for a game that has such heavy customization aspects to it, it’s completely absurd that you can’t see how a new piece of gear will affect your stats from the shop windows. You have to open your menu, check your existing gear, talk to the shopkeeper, try to remember all the different stats and how they compare to the new piece, and do that for every item you’re interested in. The random battles are too frequent for how meaningless they are, the game is far too opaque about what the different stats do, and even the controls seem to be regressing. What makes these things frustrating is that they are all things that, collectively, Kemco has solved with one team or another. Maybe have a company picnic so they can share notes or something. There could be potato salad. It would be nice.

The craziest thing is, from a graphical point of view, this game seems to be using a completely different combat engine than any of Hit-Point’s other games. Battles are done in a weird zoomed-in isometric split-screen, giving more of the screen to whichever side the action is on at the moment. It’s actually pretty cool, further underlining the point that the battle system is the best thing happening in Rusted Emeth. It feels like most of the work went into this end of the game, leaving little resources for the rest. Outside of battles, this is the same old stuff, with reused tiles all over the place, and some unusually poor character art. The soundtrack goes for a weird butt-metal style chockful of electric guitars, and as is always the case with Kemco’s games, is only made up of a few tracks that you are going to hear way too many times. The usual IAP points are here, and following other recent Kemco titles, they’re earnable in-game and only used to unlock cheat items, not dungeons or story-related content. 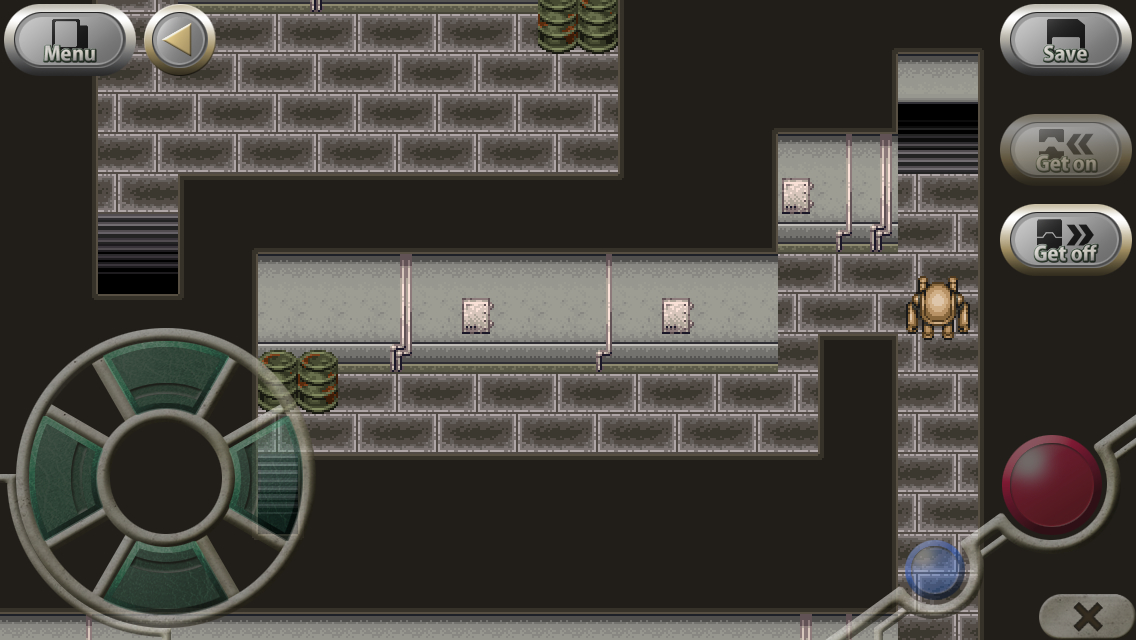 So, as is often the case for Kemco’s fare, I find myself enjoying a few things in this game, but leaving a bit unimpressed with the whole. I love the battle system, and I hope we see more like it in the future. I hate the lack of basic niceties like being able to compare equipment in the shops, and I really think Hit-Point needs a new translator that can make something decent out of their weak stories and characters. If you actually burn through every monthly Kemco release, this one will do you just fine, as it’s hardly their worst effort, but if you’re sitting there trying to pick between this and a few others you’ve missed, you’re probably safe to give Rusted Emeth a pass.