Adventure games are currently enjoying a renaissance after a long period of dormancy. Telltale’s dialogue-heavy episodic games are enjoying excellent sales and general critical acclaim, Kickstarter’s main legacy in gaming may well end up being dragging many veteran adventure game designers back out for another game, the PC market just might be the strongest it’s ever been, and touch interfaces have proven to be a natural second home for point and click-style games. It’s an interesting situation for this latest version of Secret Files: Tunguska ($4.99) to release into, a game which has a history of arriving in slightly drier climates. Originally released in 2006 for PC with ports a couple of years later on Nintendo’s DS and Wii systems, Secret Files has been fairly successful at taking advantage of a lack of competition, something that obviously isn’t the case on iOS.

It’s an important point, because Secret Files: Tunguska, in my opinion, is basically the epitome of a meat and potatoes point and click adventure game. It has everything you need, but not much else, like some sort of off-brand Broken Sword ($4.99) that people only buy when the store’s out of real Broken Sword. It’s not that it’s bad. It hits all the expected notes, it just does so without any excitement or power behind it. Kind of the perfect game when there isn’t anything better to play, but one of questionable value otherwise. Still, with four games to the series and likely more in the future, Secret Files definitely has its following, and they’ll surely be happy to see the treatment it has received on iOS. 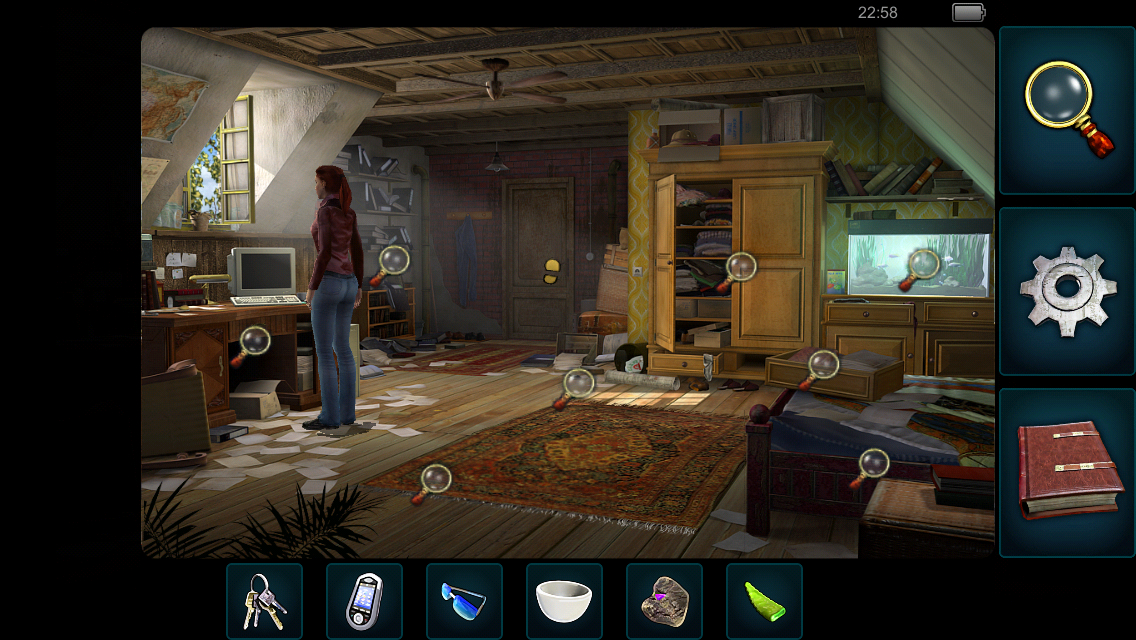 As you could probably guess, Secret Files: Tunguska tells a story set around figuring out the mostly-solved mystery of what caused the Tunguska Event, a massive explosion that occurred in 1908 in a fortunately sparsely-populated region of Russia. Even though the basic conclusion now is that the cause of the explosion was a meteor bursting in the air, there are still plenty of alternative theories, making it a ripe source for fiction writers in all kinds of fields of entertainment. Of course, this story starts off seemingly disconnected from all of that, with our heroine Nina Kalenkov investigating the sudden disappearance of her father, a scientist who works at a museum in Berlin. It doesn’t take long before the connection to the Tunguska Event starts to seep into the story, however, and I’ll just say that Secret Files opts for some of the crazier theories.

It’s not a very well-written yarn, with generic characters and absurd plot contrivances. That problem is made worse by a somewhat sloppy English translation and some genuine bargain basement voice acting. Still, it’s an entertaining enough adventure to keep you engaged for the game’s approximately 10-hour runtime, and it provides ample excuses for a bit of globetrotting. Just don’t think too hard about any of it, because it unravels very easily. Main characters Nina and Max come off like faded photocopies of Nico and George from Broken Sword, trying hard to emulate their series-driving chemistry but falling well short of the goal. Fortunately, the game is pretty good about lightening the mood up with stupid jokes here and there, even though more than a few of them are clearly lost in translation. 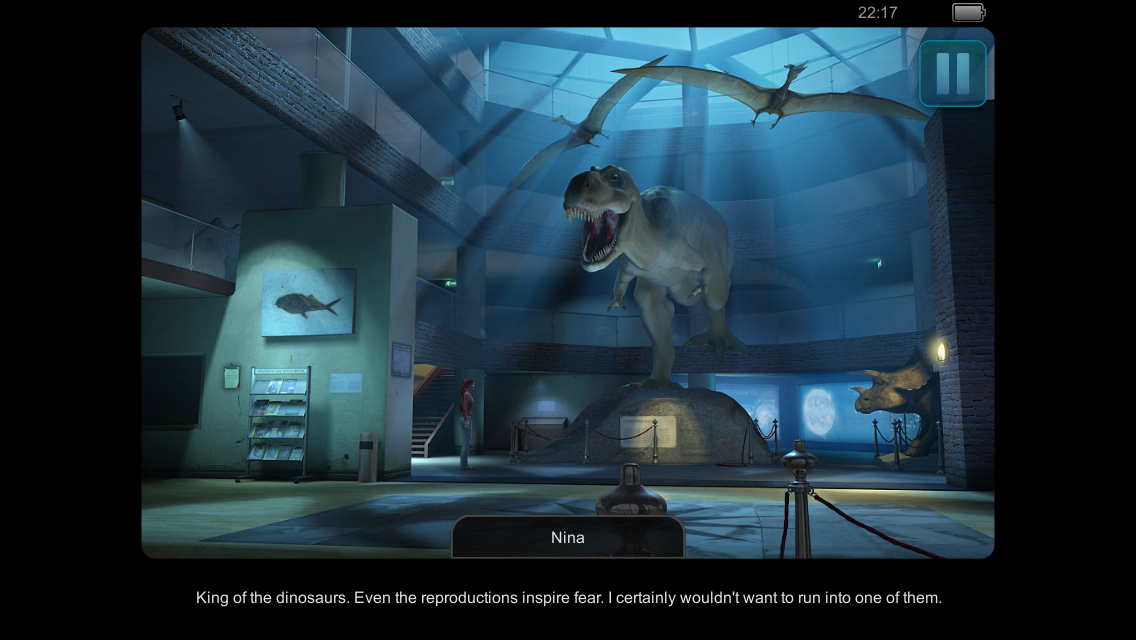 For the most part, the gameplay centers around inventory puzzles. Scan the screen for hot spots, pick up everything you’re able to, use everything you’re not able to pick up, and use the things you’ve picked up on other things you’ve picked up or things you can’t pick up until the way forward opens. Secret Files at least has the courtesy to alleviate some of the pain of hunting for tiny hot spots by giving you a button you can push to highlight every possible point of interest in the room. It makes things a lot more manageable for people who usually run into walls in these kinds of games, while the fact that it’s optional means those who want a higher challenge can simply avoid making use of it. Some of the puzzles require that special kind of insane logic that only adventure game fans possess, but if push comes to shove, you can just combine things until something works.

Inventory puzzle games can sometimes get too far out of hand with variables, but Secret Files is pretty good about limiting your options at any given point, another lesson learned well from Broken Sword. It sometimes feels oddly restrictive or fussy about what it wants you to do, but that’s the genre, or at least, that was the genre when this game was released, so it’s hard to hold it against the game. The game falls victim to another regular problem for games of this period, in that the puzzles themselves have a common tendency to be completely out of place. One of the very first puzzles has you wanting to talk to someone behind a locked door. He’s listening to music very loudly, and even though his office is quite small once you see it, there’s apparently no amount of noise our heroine can make to get his attention. So obviously, you have to open a T-Rex statue to find a maintenance guy to get the key he drops when he runs away to open the fuse box to shut off the music. Obviously. This problem reaches its crescendo deep into the game where, in order to get an item you could easily buy in a store, you have to cause a potentially serious accident. Well, I’ve seen worse, I suppose. 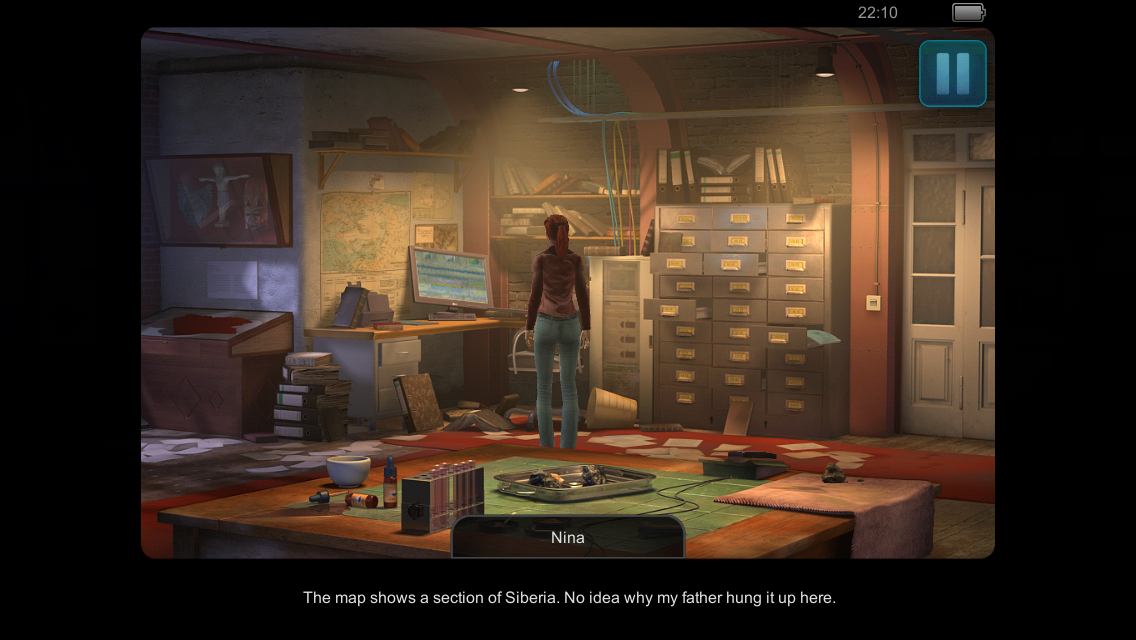 The game seems pretty aware of itself, though, making both main characters fourth wall-breaking, genre-savvy smartasses. Their pop culture references are starting to get a little long in the tooth, but the levity helps defuse situations that might otherwise have you shaking your head. This goofy approach ends up being the best part of the game’s ending, helping to loosen you up at a point where you’re almost certainly ready to self-inflict head damage just to forget the sheer stupidity of the last hour or so. I’m probably making the puzzles sound worse than they are, though. If you’ve played and enjoyed a classic point and click adventure before, nothing will be out of the ordinary here, and there’s certainly nothing approaching cat-hair mustache-levels of bad puzzle designs. You can’t die and there are no timed events, either, and with the help of the friendly interface, even the most illogical of puzzles is only a minor roadbump.

The iOS version makes something of an odd choice in that the gameplay area is windowed, with the user interface creating a makeshift border out of big buttons. If I had to guess, it might be because the original prerendered assets weren’t a good fit for the screen sizes and resolutions of iOS devices, but it’s still kind of weird to have such a big border around the play area. It makes picking out hot spots that are close to one another a little bothersome on the smaller screen of the iPhone. The big buttons are nice, but they probably didn’t need to be that big. Apart from that, the game is really easy to play, with a smart UI and lots of conveniences, like the aforementioned button that displays hot spots, a colored halo showing whether or not you can use an object on something else, a journal that keeps track of things you might need to remember later, and so on. You can save or load from multiple save spots whenever you want, so it’s easy to jump in and jump out if you only have a short time to play. 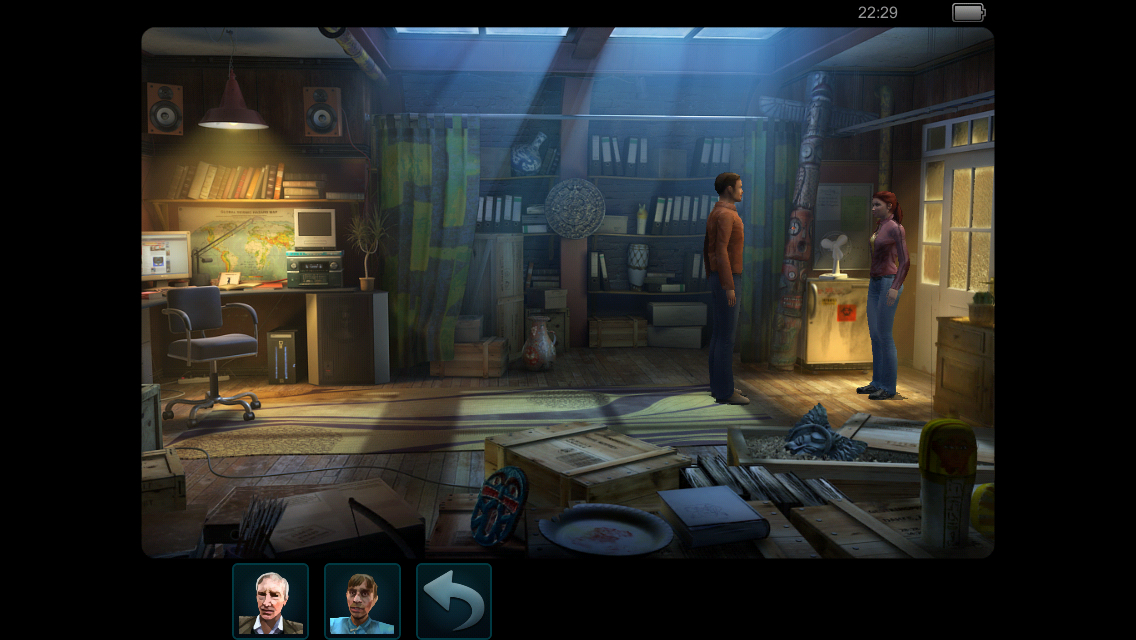 In other respects, Secret Files is just as you remember it. Since it uses a realistic style for its graphics, it’s lost a bit of its visual shine in the eight years that have passed, but it still looks quite good, making effective use of prerendered backgrounds to give everything that lived-in look that too many games forego in an effort to render everything in realtime these days. I would have liked to have seen more animation to bring the characters to life, rather than everyone just kind of standing around posing while they talk. The English voice acting is still as bad as ever, with no effort made towards giving people the accents they probably should have, and generally poor line delivery. The occasional prerendered cutscenes are made with a decent eye towards cinematography, and some of them are quite cool.

If you’re into classic-style point and click adventure games, Secret Files: Tunguska will probably suit you just fine. It has no major failings apart from its fumbled translation and asinine resolution to its story. It’s reasonably long and challenging, has a sense of humor, a very friendly UI, and its price tag is very fair. I think there are plenty of better choices in the genre on iOS, but if you’ve exhausted the usual suspects and are looking for something else decent, Secret Files is worth checking out, warts and all.