Generally speaking, RPGs tend to stick to the same sorts of settings and broad plot strokes. Some big evil thing is threatening a typical fantasy world, and it’s up to some plucky young guy and his ragtag group of accomplices to defeat the bad guy, save the world, and bring about a happy ending. Even the recent shift towards more dark fantasy settings still has us exploring a fantasy world of some kind, and still usually going after that big evil threat that will end the world. That plot outline loosely describes just about every game released by prolific mobile RPG publisher Kemco, and though I can usually find something interesting in the mechanics to catch my attention, it does get a bit tiresome at times watching the same story play out again and again. Of course, given the rapid pace of releases Kemco works with, a lot of the similarities are down to neccessity, but it’s hard to deny that there’s a certain stubborn streak running in the genre in spite of a few great counter-examples.

I think it’s too bad, because the loose framework of an RPG can easily be adapted for all kinds of situations and settings. I get the impression that some of Kemco’s developers are getting just as tired of the same old routine as anyone, however, and perhaps none more so than EXE Create. In the last year, they’ve released Warlord Revival (Free), an RPG that takes place in the Warring States period of Japan, Unlucky Hero (Free), a standard fantasy tale with a very unusual protagonist, and Journey to Kreisia ($3.99), a story about a modern geek traveling to another world. They’ve done a couple of games that were more by the book than those, but I’ve been getting the distinct impression that they want to try something different, and I’m more certain of that than ever after playing their latest, Fanatic Earth ($7.99). 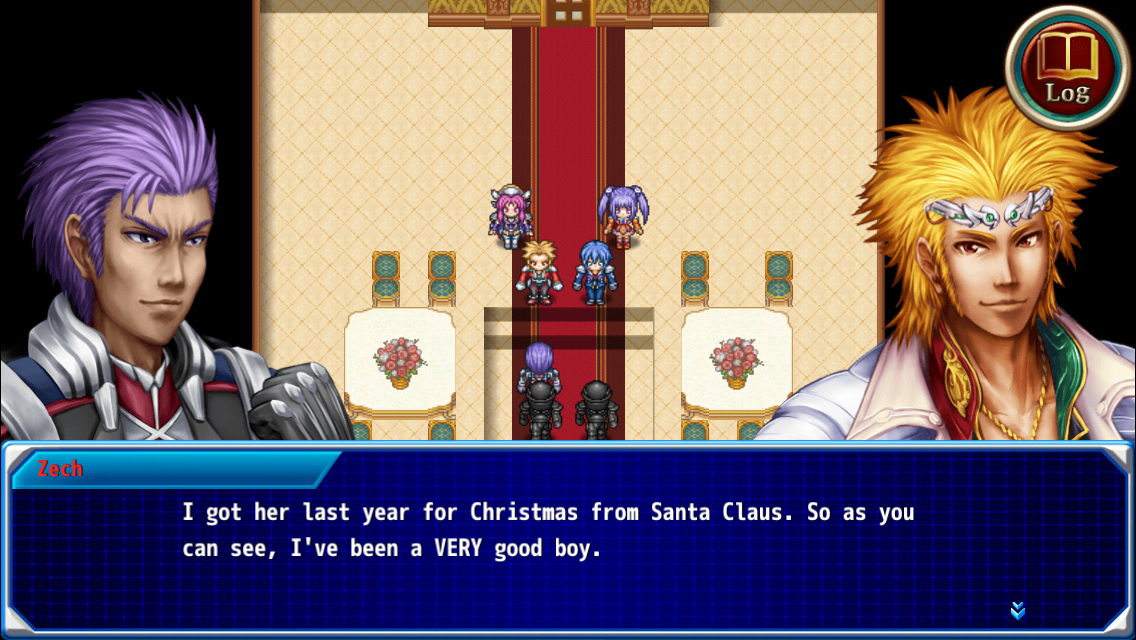 Rather than the usual fantasy world, Fanatic Earth takes place in what is perhaps the second-most popular setting for RPGs, a dystopian sci-fi future. A meteor has struck the planet, carrying with it a deadly extraterrestrial virus that wiped out most of the Earth’s population. What remains of humanity is largely huddled together inside a protective shield that houses a would-be utopia. Naturally, any utopia is just waiting for some greedy jerk to turn it into a dystopia, and we join the story with the city of Xilleon teetering right on the edge of this situation coming about. Something is up with the seemingly benevolent (but of course actually highly corrupt) ultra-corporation Cyphatek, and it’s up to you to unravel the case.

As is often the case for EXE Create games, your party is comprised of four members, but two of them stand out as the most important characters in this yarn. The first one we’re introduced to is the hot-headed amnesiac Zech, a man with a strong sense of justice, but little patience for social graces or rules of any sort. He soon runs into Michael, a straight-laced police detective who is perhaps a little bit too dedicated to coloring inside the lines. Through an odd series of events, Michael’s police chief assigns Zech as his new partner. The chief thinks Zech is a bit of a loose cannon, but recognizes his results. Together, this mismatched duo must find and take down the bad guys that the regular police can’t reach, if they don’t kill each other first.

This is probably sounding awfully familiar, and not in the typical RPG way. Fanatic Earth is, in brief, a generic 1980s buddy cop story set in a generic 1980s future dystopia, all placed within the framework of a generic JRPG. Despite its popularity in film, It’s a surprisingly rare concept in video games, and EXE Create pulls it off with the perfect amount of cheese and pathos. They seem to understand what they have going on here, and instead of trying to crowd the cast with a bunch of spotlight-stealers, they keep Michael and Zech at the forefront of every situation. The supporting cast is fairly well-written, and they have their own issues to resolve, but for the most part, they’re just pieces to bounce the law-enforcing odd couple off of. 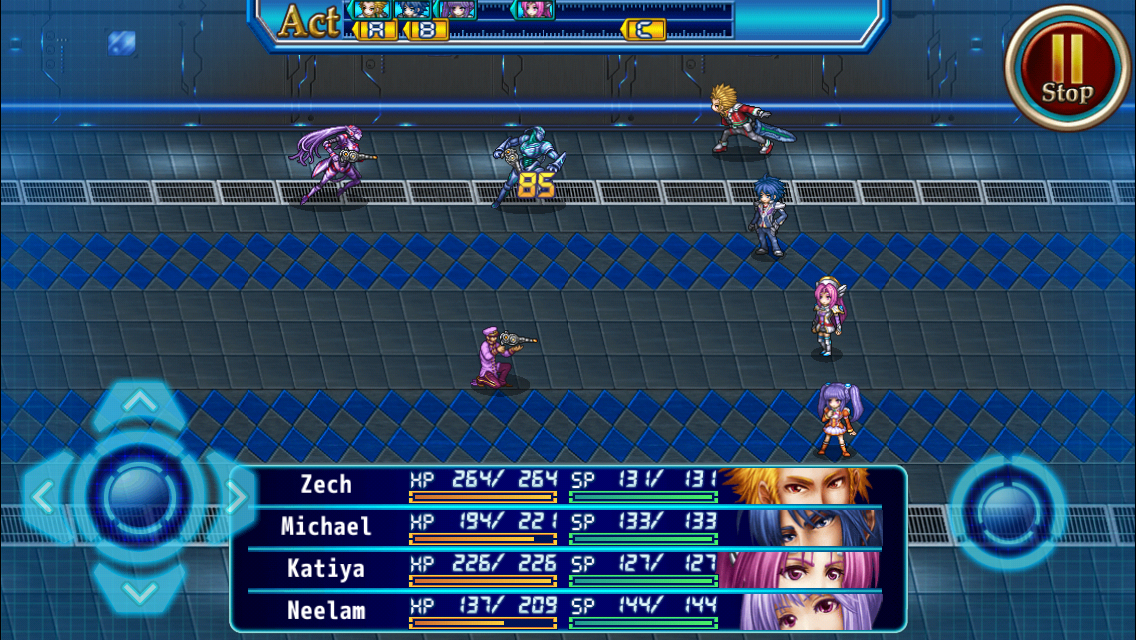 This clever approach is assisted by another enjoyable localization from whoever it is that handles EXE Create’s English versions. There are still parts that read very awkwardly, but the game’s script is surprisingly coherent, packed with idioms and references, and most of all, fun to read. It has a lot of the feeling of a Working Designs translation, and whether deliberate or not, it even calls back to one of that company’s more contentious pop culture insertions. In a more serious story, the game’s jokey approach might have felt like it was trying too hard, but it fits the Lethal Weapon tone of Fanatic Earth like a glove.

For me, the novelty of the story and characters was more than enough to keep me entertained throughout the game’s relatively short 10 hour runtime. It’s a good thing, too, because in terms of gameplay, this is as ordinary as they come. There’s no overworld, instead opting for a map with points on it that you can choose from. There are a handful of side quests you can seek out, and the game also has a set of achievements you can clear out for extra items and Fanatic Earth Points, the game’s IAP currency. The game will always clearly mark where you need to go next to move the story forward, so there isn’t any actual investigation required on this case. Non-dungeon areas are kept relatively small and simple, making navigation pretty breezy. Even the “dungeons" themselves aren’t terribly complex for the most part, with an auto-map proving a big help for finding which paths have exits and which are simply dead ends likely to hold treasures.

The combat system is the same as other EXE Create titles of late. It’s turn-based, with everyone’s turn order displayed on a bar at the top of the play area. Characters can use regular attacks or special moves that consume SP. Occasionally, using a special move will stun the enemy, allowing you to take a second shot immediately with the stats skewed in your favor. The difficulty of the battles depends on which level you choose at the start of the game, though in typical EXE Create tradition, there’s a good chance the last boss will wreck you even on easy difficulty if you’re not fighting intelligently. If you’re playing on hard, battles are almost immediately challenging, making it the best choice for veteran players. What it lacks in creativity, it makes up for by requiring the player to fight wisely. 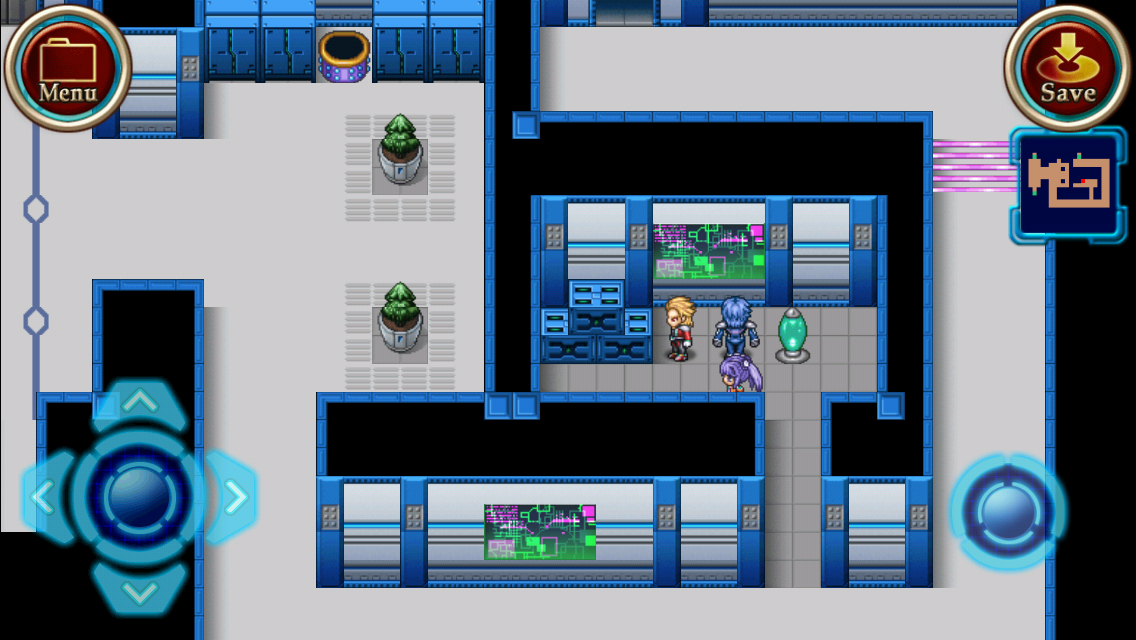 Similarly, there isn’t much character customization at all. You can of course find and purchase new weapons and armor to power up your characters, and some of the items you find will improve one stat while reducing another, allowing you some flexibility in your party build. In addition to the regular equipment, you can also find and equip cores, accessories that have a variety of interesting effects. Each character can make use of two of these cores at one time, and if you want to clear some of the most challenging battles, you’ll have to think carefully about which ones to use. Cores make up the bulk of the items in the game’s IAP shop, with a few ridiculously overpowered cores and a lot of unique cores available in addition to the standard packs of powerful healing items and so on. I’m not sure if you can find every core from the IAP shop in the main game, but most of them are, so the benefit of paying is in getting them early or having more than one.

Even though the gameplay doesn’t exactly stretch itself creatively, there’s nothing broken about it, and the interesting story and setting are more than enough to carry the game through to its conclusion. The new setting brings with it a lot of new graphical elements, a nice change from the usual recycling job, and the lack of an overworld map nicely circumvents the choppy scrolling previous games suffer from in their overworld areas. The camera is zoomed out farther than usual, and I’m not sure how well I like it. Details are harder to make out and the status bar in battle blocks your fourth party member most of the time, which is not a problem from a gameplay point of view but still goofy. Since a lot of the “dungeons" are office buildings, sewers, and so on, the environments are on the repetitive side, but their relatively small size ensures you won’t get lost. The music is alright, but as usual, there are only a few tracks that will play again and again. That familiar EXE Create “ding" sound effect is here, as well, punctuating every press of the confirm button.

If you’re coming into this game looking for something new from a gameplay perspective, you’re going to be disappointed. This is the same old bag of tricks as far as the nuts and bolts are concerned. If, on the other hand, you’re looking for a relatively light RPG with an unusual world and a fun story that doesn’t take itself too seriously, and you don’t mind the extremely familiar mechanics, you’ll probably have a good time with Fanatic Earth. It’s like a Lethal Weapon knock-off story in a Blade Runner knock-off world, all filtered through the pure madness that is a Kemco RPG. If that description sounds awesome to you, drop a few bucks on this one. I doubt you’ll be disappointed that you did.