When I was younger and even less wise than I am now, I often wondered why there weren’t more games like The Legend Of Zelda and Metroid. I mean, they were popular, almost everyone liked them, surely there was some gold in those hills, right? Later, when I actually started thinking about the design behind games, I realized that it’s not that people didn’t see profit or merit in those types of games, but rather it’s that they’re a colossal pain in the butt to put together.

To create a good one requires successfully pulling off one of the trickier bits of magic in gaming, which is making the player feel like the world is open and at their discretion when they’re really being secretly guided along a linear path. This takes a very careful touch, since missing the mark in either direction can spoil the game completely. If you’re too obvious about your gates, the open world illusion vanishes, but if your gates aren’t assertive enough, you risk the player getting lost or sequence-breaking everything into a fine mess. As the game gets bigger and longer, the complexity of holding that middle ground increases exponentially. 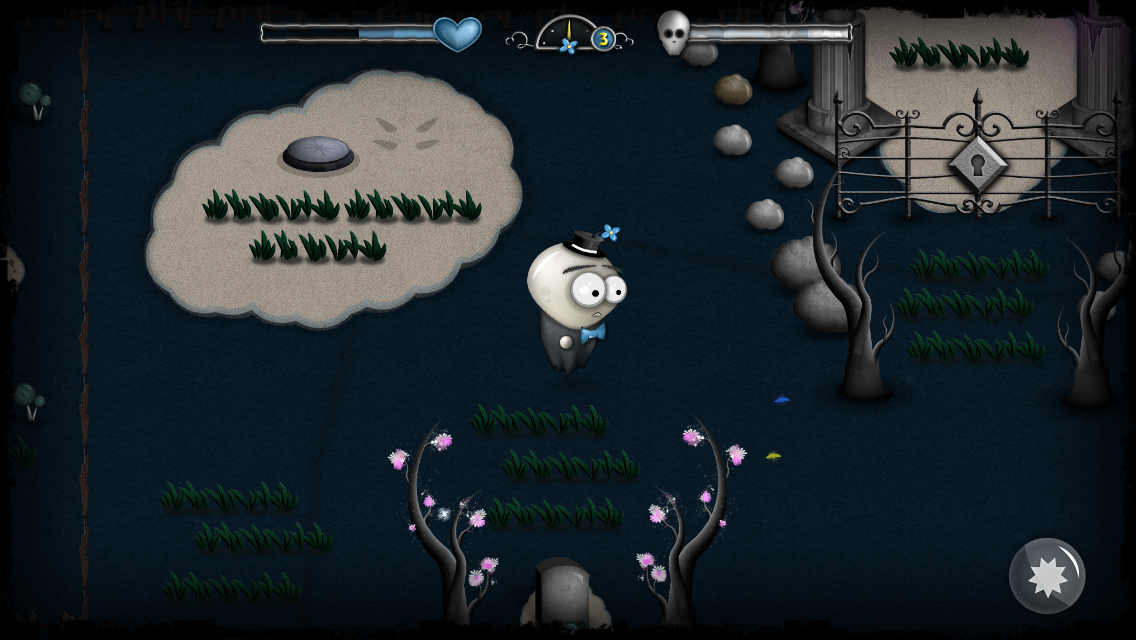 I have a lot of respect for independent developers who swing their stick at that type of game, even if they end up succumbing to one of the many pitfalls along the way. I also find myself a bit more understanding when they come up a little short on playtime. Milo & Me (Free), an adventure game that crosses Zelda-ish gameplay with a bleak art style reminicsent of Don’t Starve, takes more than a few missteps in its design and its story is neither long nor complete. Nevertheless, it’s still an okay experience if you can get a handle on its quirky controls. Its presentation is its strongest point, but it’s competent enough in other areas for genre fans to get some value from it.

The game follows the story of Milo, who looks something like the ghost of a South Park kid. One day, he’s playing with his ghost-dog, Cody, when the poor little pup is sucked into a portal of some kind. Milo takes this in stride fairly well, calling out to you, the player, to assist him in recovering his faithful friend. That’s right, the ‘Me’ in the title is, in fact, you. Yes, you, the person in the underpants reading this. Milo, being a ghostly fellow, will float wherever you lead him with your finger. Even though he’s dead, he can still be hurt, so you’ll want to avoid enemies and hazards wherever possible. You can take out some of the enemies directly by tapping on them, but spiked enemies need to be defeated with Milo’s attacks, which are activated by touching Milo and flicking in the direction of the bad guys. 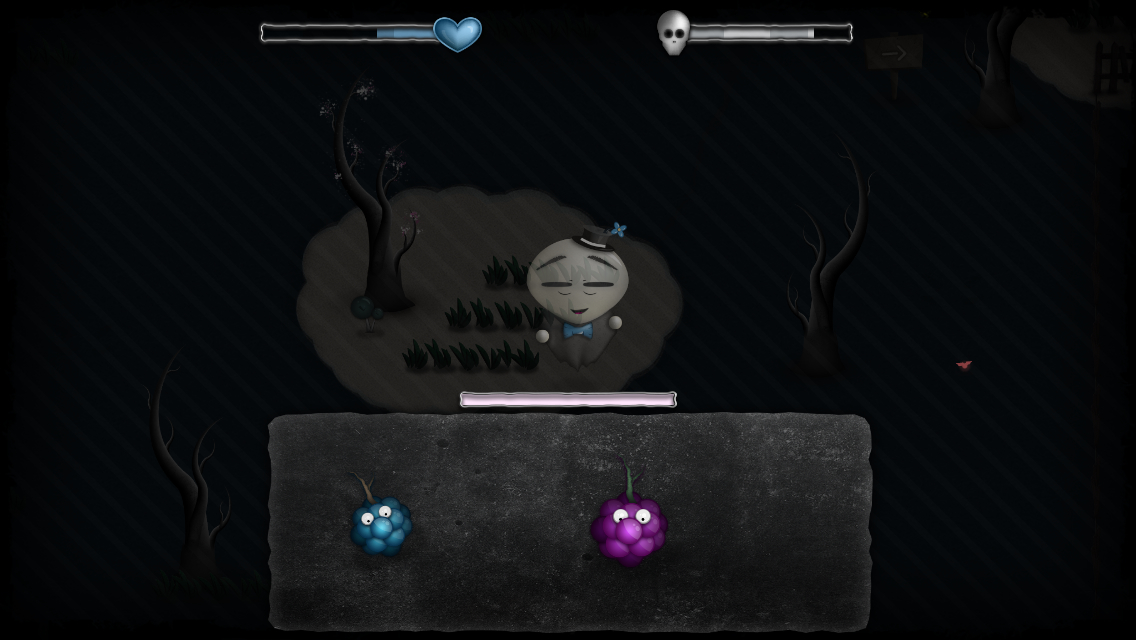 Milo can’t do much at first, but as you play through the game, you’ll find new items that give him new abilities. In typical Zelda style, you can then take these new abilities to places on the map you’ve been to before in order to access new dungeons and areas. Unfortunately, most of these abilities are not much more than oddly-shaped keys, since they have little practical use outside of getting past their matched gates. Using items, or Milo’s attack for that matter, consumes some of your magic gauge, but it refills automatically with time, so you don’t have to worry too much about conserving energy. In fact, you should make liberal use of your health spell, since it’s easy to take a ton of damage if Milo gets too close to an enemy. If you run out of health, you’ll get booted back to whichever checkpoint you last activated, which can sometimes be a little far back.

The game world isn’t terribly large, with the overworld made up of just 18 areas of varying sizes and only a few dungeons, but it is quite dense, with a lot of stuff placed around to find and play with. The dungeons are almost as big as the overworld map itself, and are also designed with a bit of backtracking in mind. In all, the game doesn’t run much longer than a couple of hours and only represents the first chapter in the story. Other chapters are promised as free updates when they’re ready, but we’ll have to see if anything comes of that. The game as it is sort of ends just as it’s picking up, which is kind of disappointing. Hopefully, the developer will come through. 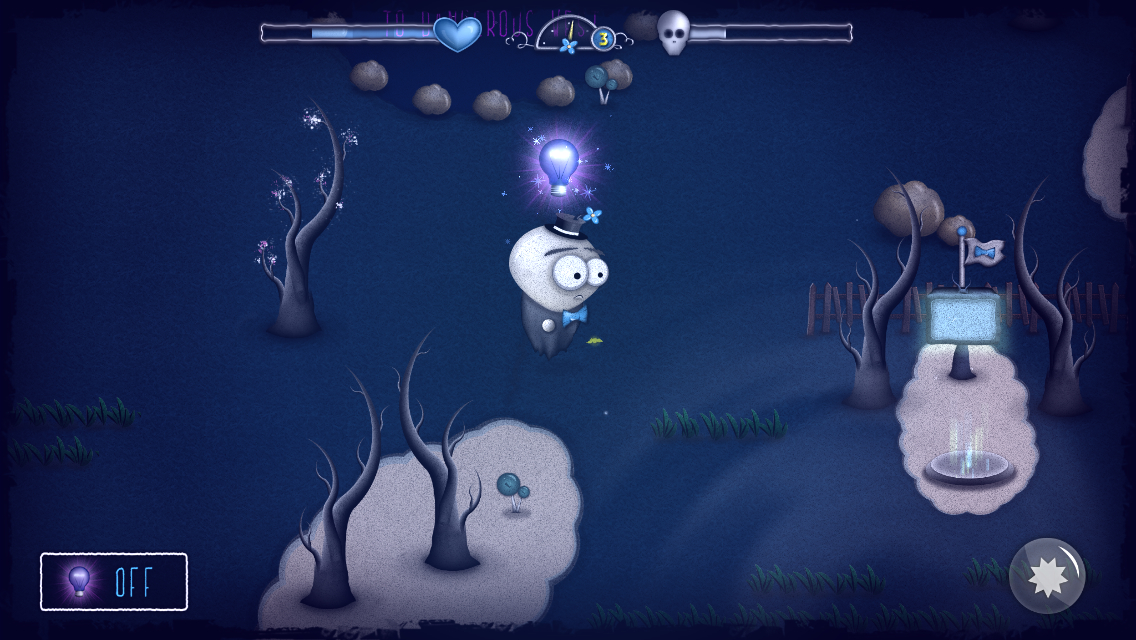 When I think of a good Zelda-style game, I think there are many aspects that the game has to knock out of the park to be great. You need a big, interesting world to explore, good puzzles, simple yet satisfying combat, and a fun, varied set of tools to play around with. Exciting boss fights certainly don’t hurt. Milo & Me checks off some of those boxes, but I think the most crucial area it doesn’t measure up in is the puzzle design. There are no real headscratchers of any sort, with most of the challenge coming from methodically checking every inch of the world to try to find a hidden teleport pad. Too much of this brief game is spent taking a boring stroll with your black light on. Regrettably, the combat doesn’t keep up its end of things, either, with a fairly small roster of enemies who only pose a threat when you’re completely careless or the controls fail you.

The control problems arise out of double-edged sword of sorts. Milo & Me takes place in an amusingly lively world, with plenty of elements for you to touch, drag, and shake. This is wonderful, of course, and helps draw you into the game, but between the user interface, Milo, any enemies on screen, and the various interactive objects, it’s sometimes hard to find blank space for your finger. I frequently had Milo waste magic throwing a bone when I wanted him to walk, or even worse, the opposite, causing Milo to collide with an enemy. Dropped items need to be flicked towards Milo, but those get in the way as well, causing you to miss out on a lot of stuff if you aren’t extremely precise. This probably isn’t as big of an issue if you’re playing on an iPad, but the game feels poorly suited for the tighter quarters of the iPhone’s screen.

Milo & Me comes off as a very ambitious game, and I appreciate that, but there’s a lot of work to do design-wise before the idea can shine to its full potential. I love the atmosphere and the way the game world is set up, with lots of tantalizing early peeks at places you can’t reach until later. I’m not a big fan of the inadequate controls and puzzle designs. I also dislike individual chapters that don’t feel complete on their own, particularly when the arrival of later chapters is far from a given. The low price and relative scarcity of competent games in this genre makes Milo & Me a little bit more enticing for fans of this type of game, but only if you’ve already knocked out better games like Oceanhorn ($7.99) or Ittle Dew ($1.99).