Late last year, a rough little indie platformer named Cally’s Caves (Free) won over the hearts of many members of the TouchArcade forums. No sense mincing words, the game’s visuals were pretty bad, both in design and execution. That said, the gameplay was fun, the music was excellent, and for reasons I can’t exactly understand, the game in its entirety was free, with little more than inobtrusive ads and a single wholly unneccessary IAP to pay the bills. The game featured large, sprawling levels and a less forgiving checkpoint system than today’s games typically use, giving the game a pleasantly challenging bite. Well, it hasn’t been all that long, but Cally is back in Cally’s Caves 2 (Free), and the months have been kind to her. It’s still a bit rough around the edges, and in some aspects rougher than the first, but there’s no denying the game is a huge step up from the original overall.

The story of Cally’s Caves 2 is nearly identical to the first. Cally’s parents have once again been kidnapped by the evil Dr. Herbert and taken to the depths of his lair, which is inexplicably connected to the cave system in Cally’s backyard. It doesn’t seem like a great arrangement for either party, so I’m not sure why one of the two doesn’t just move, but I am not the guy who has to make sense out of these things. Brave little Cally isn’t going it completely alone this time, as she gets the occasional bit of guidance from a strange guitar-strumming weirdo named Lloyd, who seems to turn up in the strangest places. There are 104 levels standing between Cally and her parents, most of which are pretty short but densely packed. 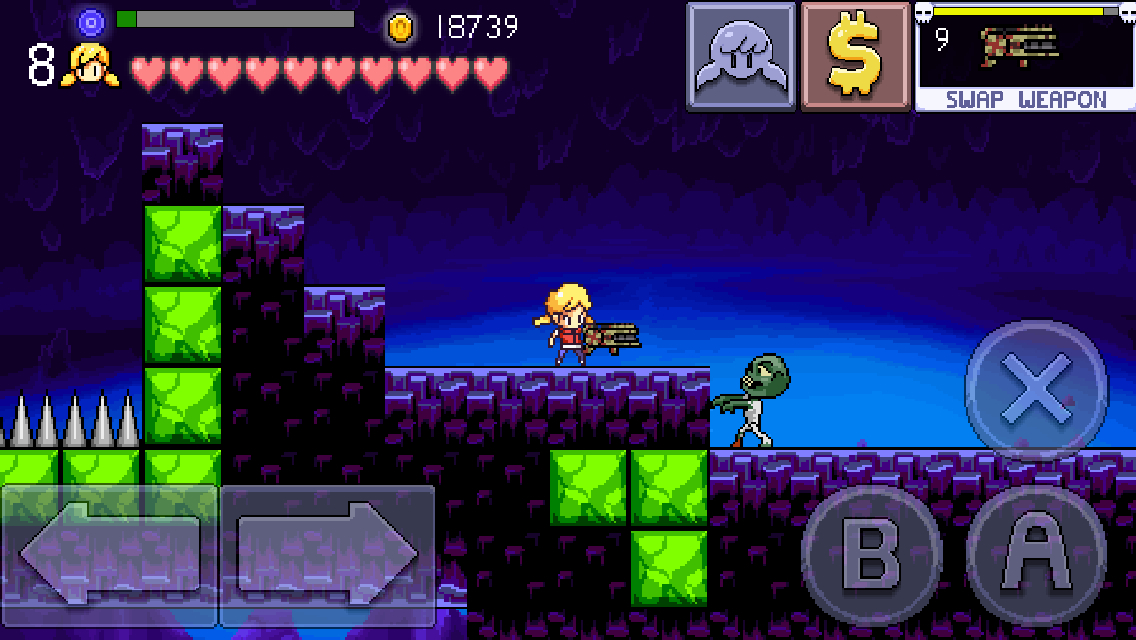 The basic gameplay hasn’t changed dramatically. The game is still an action platformer with a heavy focus on ranged attacks. There are a lot of smaller changes that end up affecting the game in pretty big ways, though, so let’s discuss those a little bit. In the original game, you could buy any of the weapons in the game at any time as long as you saved up enough coins. In the sequel, weapons are earned at specific points in the story, resulting in a satisfying dripfeed of new attacks that carries you through the game. With weapons removed from the selection, the in-game shop is now stocked with more upgrade items that enhance Cally’s power or improve her melee attack. Ranged weapons can be leveled up this time through use, increasing their power and infrequently changing their appearance. There’s also a much greater variety of them, covering plenty of situational uses.

One of the bigger changes is the frequency of checkpoints. While the first game only gave you a checkpoint after taking down a boss, Cally’s Caves 2 gives you a checkpoint upon entering each new area. You can automatically warp to any area you’ve been to just by opening your map and tapping on the area number. This cuts down on frustration and allows you more freedom to explore, but it does take away from the experience a little bit. One of the defining elements of Cally’s Caves was how difficult it was relative to other iOS action platformers, so it’s sad to see that toned down to a near non-factor. Perhaps it’s for the best, however, since this sequel also implements a sort of collision system between Cally and her enemies, and it doesn’t work as well as it should. 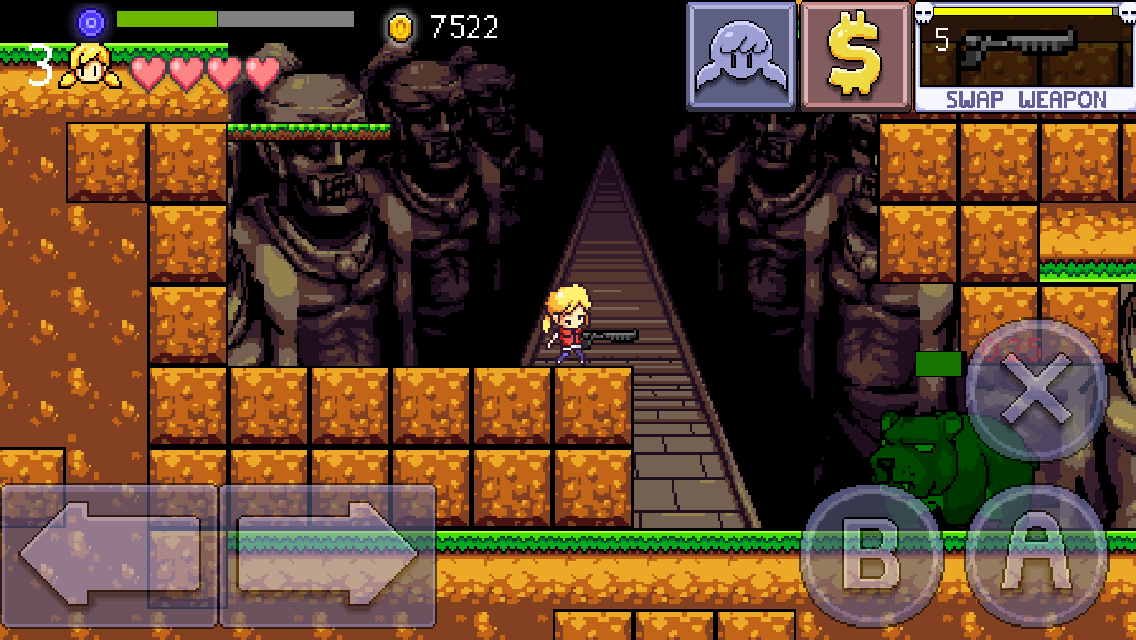 In the original game, if you touched an enemy, you flashed and took damage, but there wasn’t any knockback, so you could just keep on running and get out of problem situations in a hurry. In this game, you can’t pass through enemies without taking heavy damage, so if your back ends up to a wall, you can end up dying very quickly. Enemies can now push you into pits if you’re not careful, as well. There isn’t much of an invincibility buffer at all, which is probably the main culprit behind why it feels so clunky. It’s very aggravating to go from full life to nothing because you’re getting repeatedly bounced without a chance to escape. The frequent checkpoints alleviate this, but no matter how big your life gauge’s maximum becomes, you’ll always come back with just three hearts, so you’ll have to fill them up again each time. Fortunately, the game relies heavily on ranged combat, so as long as you’re careful, you can avoid the collision issues. Just remember to jam on your sword button if anything gets too close.

The most dramatic changes in Cally’s Caves 2 are in the visuals, however. It has a new style that works a lot better, and everything seems more detailed and animated than it was in the first game. It also feels like there’s a greater variety in the backgrounds, and larger enemies and bosses look downright professional, a far cry from the first game’s simple appearance. I don’t think this game would look out of place at all on the Game Boy Advance or Nintendo DS, while the first game looked like it crawled out of the back page of a Tandy catalog. The game also has a new soundtrack, and it’s just as cool as the first game’s set of tunes. There are a bunch of different tracks that just kind of play one after another rather than fixed to particular levels, with the overall feel evoking 1980s synth, the type you would hear in weird sci-fi movies of the era. Overall, the presentation’s received major improvements, truly a job well-done.

As with the last installment, Cally’s Caves 2 is free. There are ads that don’t really get in the way, but if you want them out of there, you can buy the game’s sole IAP, a $0.99 item that not only removes ads, but also gives you poison and bullets and dramatically increases the money drops from enemies. I wish I could toggle those off, since they completely break open a game that is already a bit too easy. Whichever route you go, you’ll get your money’s worth out of the game. It takes a couple of hours to clear and even after it’s done, you can go back and poke around for more secrets or try out some of the weapons you neglected on the first run. The game has a nice speed to its action that makes it fun just to run and jump around levels shooting things. I also had a lot of fun leveling up the different weapons to see how they would look.

Overall, this is a really strong sequel, and it’s all the more impressive when you consider how quickly it’s followed its predecessor. If you loved the first one, you might be a little bit let down by the new checkpoint system’s effect on the difficulty level, but there’s still plenty here to enjoy. If you haven’t played the first one and enjoy a good action platformer, you should probably give it a look since it’s free, after all, and then come back around and give Cally’s Caves 2 a whirl, too. Playing the original first will help you appreciate what a leap the developer has managed here. People in our forums are having a great time with it, and the developers are participating in the thread, so make sure you check in there for more impressions. The game is still a little rough, but worth your time.