Although it’s recently become something of a household name in gaming circles, Belarus-based developer Wargaming.net has been around for a while now. For the first several years, it focused on strategy games, both turn-based and real-time, and had modest success within that niche. It finally hit the big time with its release of World of Tanks for the PC, a massively multiplayer online action shooter designed with the strategic sensibilities you would expect from a developer with Wargaming’s resume. Initially launched in Russia in 2011, it soon spread across the globe, enjoying huge success in virtually every region it released in. It’s a rare free-to-play game that manages to pull in casual players and hardcore alike, with its fair economy, approachable gameplay, and surprising depth.

World of Tanks Blitz (Free), as you can probably guess from its different title, is not a port of the PC game, but it shares a great deal with it. The broad strokes are pretty similar. You’ll still choose from a selection of tanks from various countries and enter a battlefield with a number of other players. It’s still very much an action-oriented affair where you’re trying to take out tanks from the opposing team while securing checkpoints. It’s also still free-to-play, and like its PC papa, it somehow manages to mostly avoid the devastating imbalance that often occurs in multiplayer games that allow people to pay their way ahead. 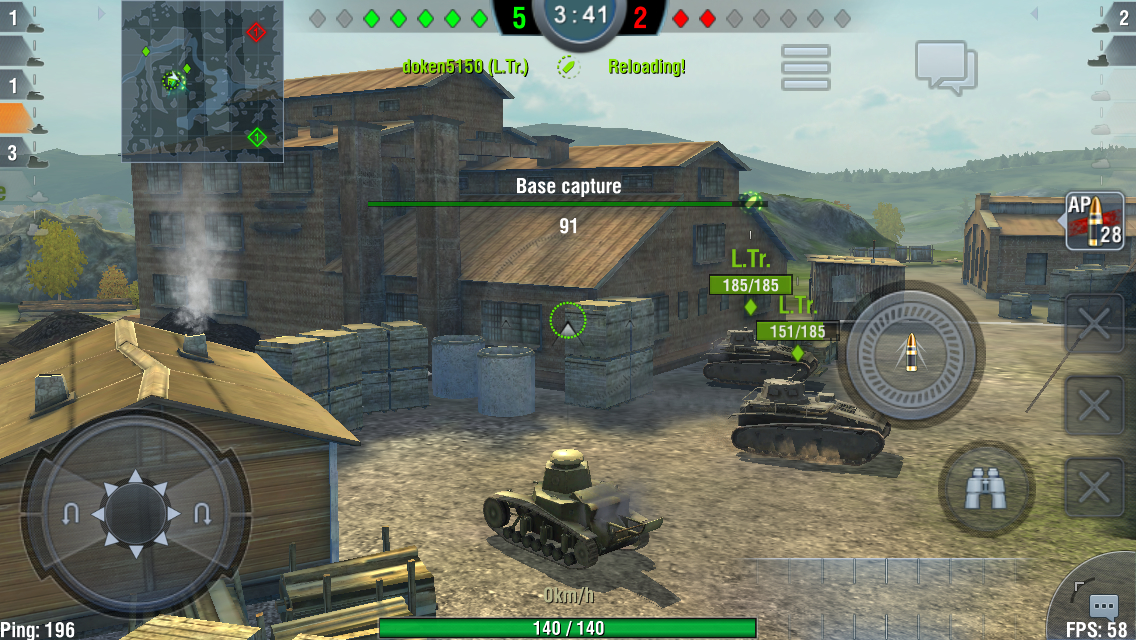 World of Tanks isn’t a terribly complicated game even in its original form, but it’s even more streamlined here. Instead of teams of 15, Blitz limits each side to seven members. The eight available maps are smaller than those in the PC version, a wise choice that keeps the action rolling with the smaller number of players. The tank selection is considerably more limited, with only three countries represented in the game’s 90 available tanks, but more to come later. The tech trees are a little smaller, and there’s only one mode of play. Even with all of those concessions, however, Blitz manages to nicely capture the essence of the original game in a more bite-sized form. As opposed to the often-lengthy matches of the PC version, every match in World of Tanks Blitz is finished in six minutes or less.

You start the game with three tanks, each one the weakest in-game representative of its respective country. After choosing which tank you’d like to use, you can make modifications to it using experience points and cash you’ve accrued, buy different types of ammunition, or pick up one-use boost items. After you’re ready to play, you just hit one button and the game will automatically match you up with other players. Teams are sorted based on the strength of the tanks each person uses, so at least as far as equipment goes, things are generally balanced between the two sides. 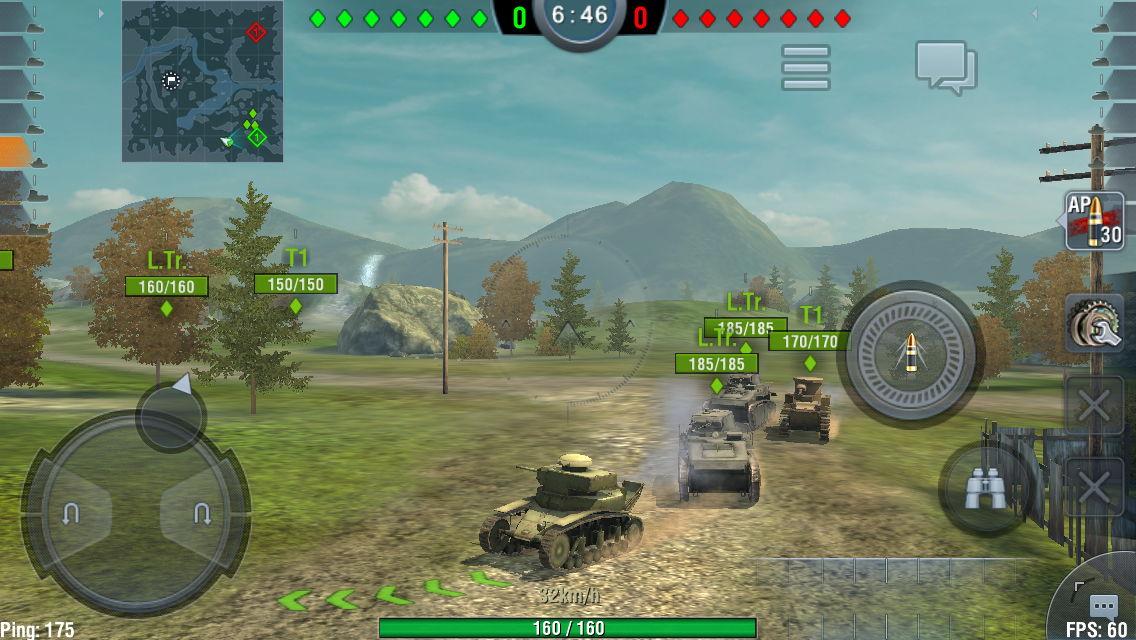 Once the match starts, you have three basic goals to stay on top of. First, there’s a base in the middle of each map that can be captured if you occupy it for a certain length of time. Doing so results in an automatic victory for your team, so it could probably be described as the primary goal. Of course, both sides want that base, which tends to more naturally lead to the second and third goals. If the other team is completely wiped out, your team obviously wins, so you’ll be looking to take out opposing tanks at every opportunity. Conversely, if your team gets taken out, you lose, so you also need to take care of yourself and make sure you don’t get destroyed senselessly. When you finish a battle, win or lose, you’ll walk away with some experience points and cash that you can use to upgrade, so even if you fail, you won’t leave with an empty hand.

In terms of available actions, you can move around, shoot, zoom in, and make use of any repair kits you might have. Naturally, your tank controls like a tank, so it takes a bit of time to adjust to things like the methodical way they turn and move forward and back, but once you’ve got that down, the gameplay isn’t generally that far off from the usual 3D shooter. You’ll want to make effective use of cover, duck in and out to take shots, avoid getting boxed in by multiple opponents, and so on. Where World of Tanks differs is the character lent to the game by the tanks themselves. Each tank works a bit differently from the next, and you need to keep in mind where weak points are located for both you and your opponent. Certain parts of the tank are heavily armored, making it pointless to waste your shots on them. Other parts are extremely vulnerable, something you’ll want to keep in mind as you’re moving out to take your shots. Some tanks can swivel their cannon around, while others can only shoot straight ahead. Getting to know each tank is a lot of fun, especially since it has tangible in-game benefits. 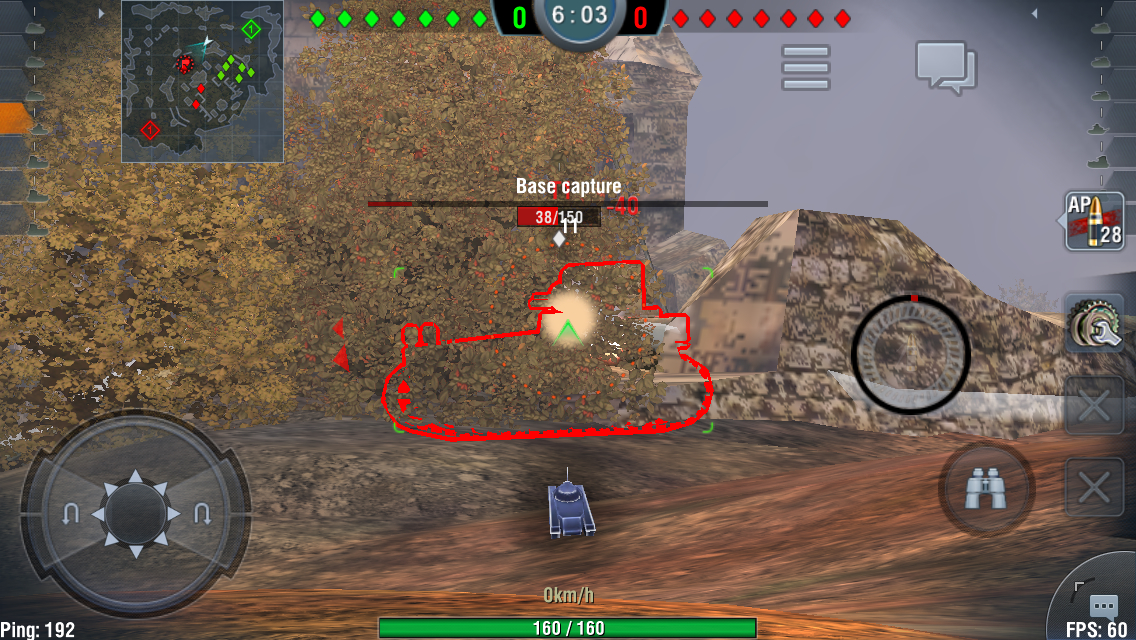 The touch controls work very well, and the game allows for a huge amount of customization in where you want buttons placed and so on. By default, the game has aim assist turned on, which is helpful while you’re getting your bearings, but sometimes gets in the way. Luckily, you can turn it off at your leisure. Getting used to the way the tank moves was actually more difficult than getting used to the control setup. The game also supports MFi controllers, but the implementation is kind of half-baked. Navigating menus and such still requires you to tap the screen occasionally, and while you might think using a real stick to move will work out better than a virtual one, it’s actually a little trickier. With the virtual stick, it’s easy to see where the zones for turning start and end, while using a real stick, it’s sometimes a bit more difficult when you’re trying to move in a tight space.

As this is free-to-play, I’m sure you’re wondering how the game’s monetization works. First of all, there are no stamina meters. You can play as much as you want, with the only caveat being that a tank in play is tied up until that match has ended. If you get destroyed early in a match, you can duck out and start another match before the first one has wrapped, but you can’t use the tank you were using until that battle has resolved. It’s a very minor restriction, particularly with the brevity of the matches in the iOS version. The game makes use of a premium currency, gold, to power all of its other monetization elements. 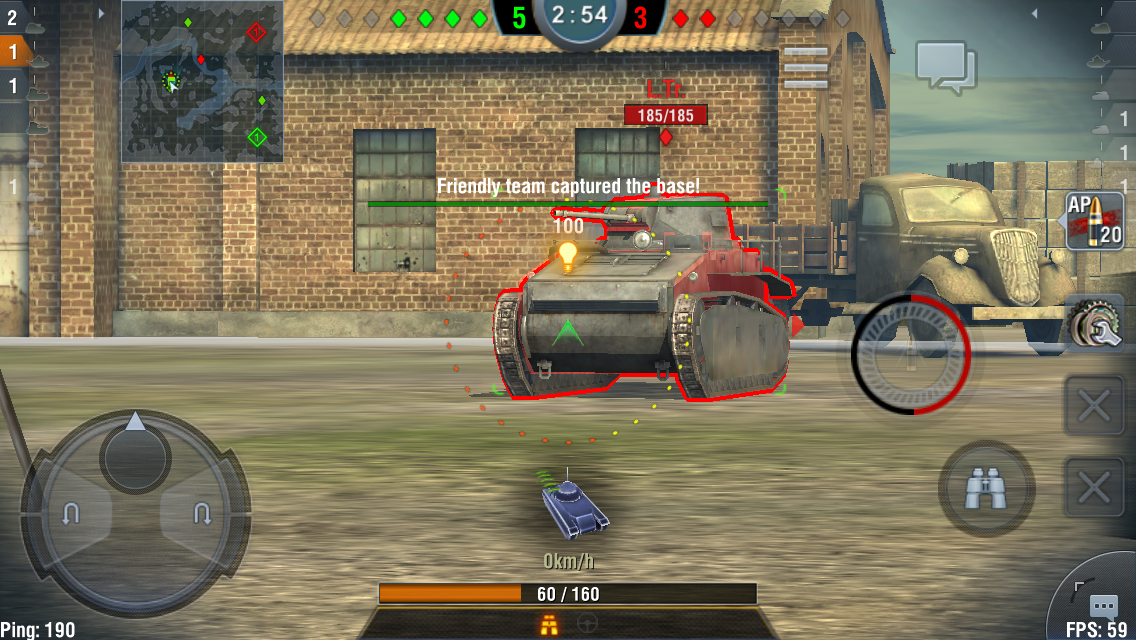 Gold can be used in many ways. First, and in my opinion foremost, you are limited to six tanks at any one time unless you spend gold to buy more slots. You can sell off old tanks when you want to get new ones, and I can’t imagine a gameplay reason to need more than six tanks at once, but I’m a collector so not being able to catch them all drives me a little crazy. You can also use your gold to buy exclusive tanks that are of similar power level to other tanks in their class, buy special ammo that also seems to have an analog you can buy with regular cash, buy cash itself, or activate a premium account. Premium accounts earn more silver and experience points than regular ones, and the game does like to rub that in your face after every fight by showing you how much more you could have earned.

Surprisingly, none of this stuff ruins the balance of the game. While there is content that is gated off from players who don’t spend real money, none of it is better so much as it is different and visibly exclusive. Your free tier one tank isn’t going to have a good time against a premium tier five tank, but the tier five tank you can earn by playing will handle the job just fine. The free economy is quite generous, so you never really feel like you’re grinding things out. The gameplay itself has such a heavy skill component to it that even a weaker tank can make useful contributions in the right hands. If they cut all of the premium content out of the game tomorrow, you’d still be left with a game that feels well-designed and enjoyable, and that’s certainly something worth applauding in the scope of the overall free-to-play scene.

If you’re into tanks or multiplayer action games, I think you would assuredly enjoy what World of Tanks Blitz is doing here. It could use a little more variety, perhaps a new mode of play or two, but the game already works very well as it is. The gameplay is impressively smooth for a real-time game with 14 players on iOS, and the short and sweet nature of the battles makes it all too easy to duck in for a round or two here and there. Outside of the matches, working your way up through the different levels of tanks is a lot of fun and good incentive to keep the game in your rotation. Plenty of players in our forums have been enjoying it, too. It’s a rare free-to-play game that respects both your time and your money, and it’s definitely worth checking out.