Uppercup Football (Free) is an intriguing take on soccer, one that’s somewhat turn-based. It takes the core rules of the sport and makes it so that the player with the ball is stationary, with the ability to set shot power, timed to a rotating arrow. The game is actually set up to be an interesting match of soccer, but it just decides to layer too many extra bells and whistles on top.

The game is level-based, with each level having a set time and number of goals to score to advance, with the star system for winning more quickly. Opponents scoring decreases the goal count by one and just generally wastes time, so the battle for possession becomes important, and making smart passes. There’s no control over anyone except the ball possessor or primary defender, who can make a variable-power tackle in any direction to try and reclaim the ball, or just get in position to intercept a pass or shot. Thus, keeping an eye on where teammates are and compensating for the various field conditions is important. 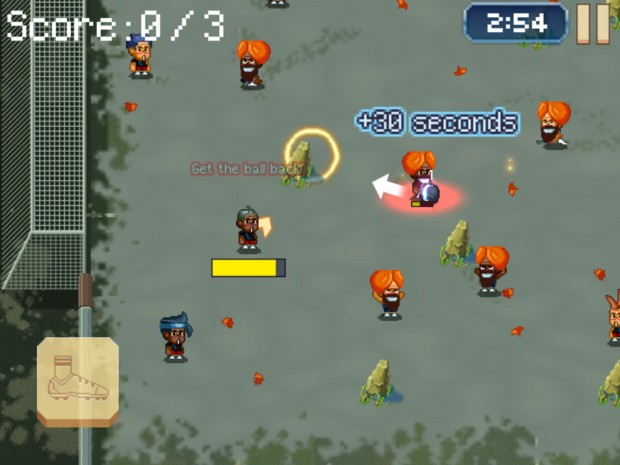 It’s far from a traditional game of soccer: there’s pitches with mines, portals, and slippery patches, and wind often plays a major role in passing and aiming shots. Oh, and sometimes the soccer ball is not actually a soccer ball, but a rugby ball, or a bowling ball.

The thing with Uppercup Soccer is that I’m not sure it needs all these bells and whistles. The core game of soccer is actually pretty compelling on its own, the idea of battling out with an opponent, and constantly having to make passes to avoid the defense, and get into a position to best avoid the keeper? Motion Twin has almost inadvertently created a soccer game that represent’s the sport’s core tenets better than many ‘actual’ soccer games, and it’s not even trying to represent real soccer. It’s a deliberately-crazy take on the sport, and yet, if it was just about trying to outscore the opponent in a certain time frame, I think the game would be just as compelling as it is now. 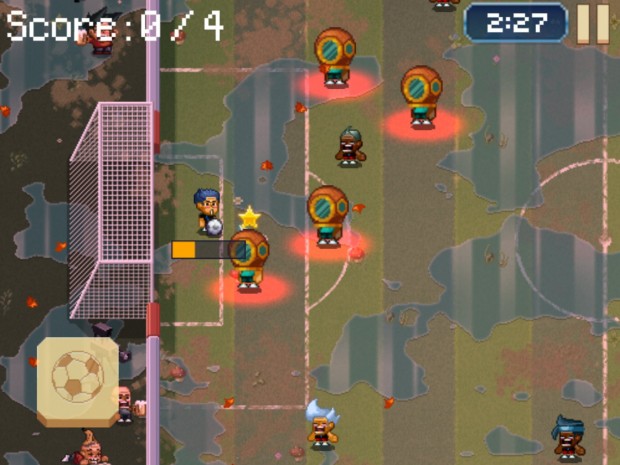 Instead, the game gets a bit too chaotic at times, and perhaps committed too much to the idea that it can do wacky things with soccer. Sometimes there’s just so much going on that it’s hard to make any sense of a good strategy for what to do: it’s pretty much just pray that the ball doesn’t go to the opponent, especially when the opponent has the ball. Fouls make little sense either, as some tackles earn yellow cards and others don’t. They add an element of risk, as a player with a yellow card might not want to be sent directly after an opponent with the ball, but, then again, they might not get that foul.

Still, while Uppercup Football is perhaps too chaotic for my tastes, there’s still fun to be had with the core soccer play, the many references to pop and gaming culture with the many opponents are amusing, and even the elements that make the game chaotic are still fun to play with, just not all the time.