Thanks to the relatively low barrier to entry, the App Store is filled with labors of love. Compared to most other times in gaming’s fairly short history, it’s less difficult to get a game together and out in front of the public’s eyes, even if you have a small team and no budget, so it’s no surprise we see a lot of people making homages to their childhood favorites or putting together something that approximates their dream game. Arcane Ghosts (Free) is one such labor of love, a letter written with care to express affection for the side-scrolling action games of old, with a particular eye towards Capcom’s Ghosts ‘n’ Goblins series. That series is famous for a few things, but mainly for being a very frustrating game with unusual, yet tight, controls. Arcane Ghosts gets almost all of that right except the most important part.

You play as a guy named Orestes who is on a mission to save Greece from the evil Necromancer. Orestes looks and moves very similar to Arthur from Ghosts ‘n’ Goblins, right down to his strange little jump. He even has a similar means of attack to Arthur’s default lance, with the ability to toss an infinite number of javelins at his undead foes. Unlike the hard stage-based approach of Ghosts ‘n’ Goblins, the levels of Arcane Ghosts are interconnected and you can freely travel between them if you like. You’ll often need to follow one branch to find a key or other item and then bring it back to an earlier part of the level to proceed. Occasionally, you’ll face off against a large boss creature, some of which bring to mind classics like Actraiser or Castlevania. You’re only given one life to complete your mission, but you have an infinite number of continues that will revive you at your last checkpoint, which mitigates the difficulty somewhat. 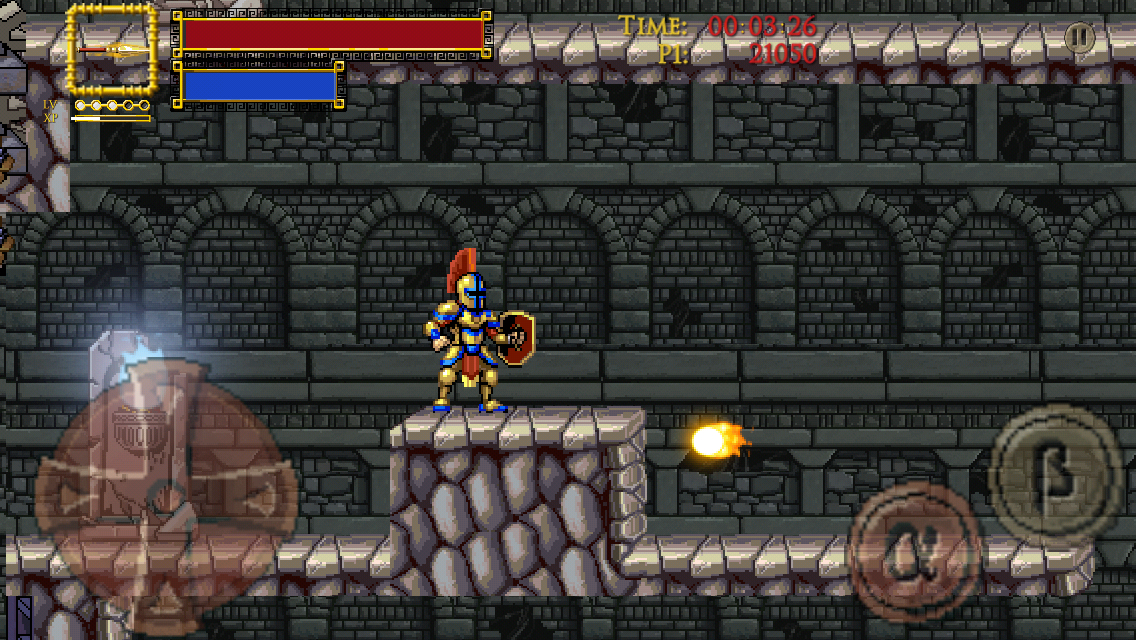 The difficulty kind of sits at the center of this game. First, as an homage to those old-school games, the level designs can be pretty tough, and the bosses are good, pattern-based challenges with lots of HP and chances for the player to screw up. This is a good sort of difficulty, though it’s certainly not for everyone. Unfortunately, there’s another type of difficulty in this game, and it’s an incredibly pervasive sort of frustration. The controls, which make use of a virtual pad and buttons, are terrible. The directional pad is stiff and lacks responsiveness, and even the attack button sometimes doesn’t work. The hero’s Arthur-style jumping is a little awkward, but mostly fine, until you get the double-jump. You would expect the double-jump to work like the one in Ghosts ‘n’ Goblins or almost any other game that uses it, but instead it’s just this weird little extra oomph at the end of your first jump, activated by holding your jump button. The main purpose of a double-jump is to give the player a chance to correct their course or jump around corners, neither of which are possible with the way this game uses it.

Even this wouldn’t be enough to completely sink the game, but on top of control issues, the game also has absolutely terrible collision detection. You will constantly get hit by things that aren’t touching you. Enemies that spawn from the ground will start damaging you well before they appear, and since Orestes does not enjoy the benefits of an invincibility period after getting hit, you’ll pretty regularly get bounced around to your death when you get hit. This is particularly an issue when you’re between a couple of threats. It’s very aggravating, and not in a pleasant way. As I said before, the game’s intentionally difficult moments can be pretty tough, and while there are checkpoints, they’re far enough apart that getting sent back over a ridiculous death due to poor controls and bizarre collision is positively draining. The frequent and lengthy loading times are just the cherry on top of that sundae of woe. 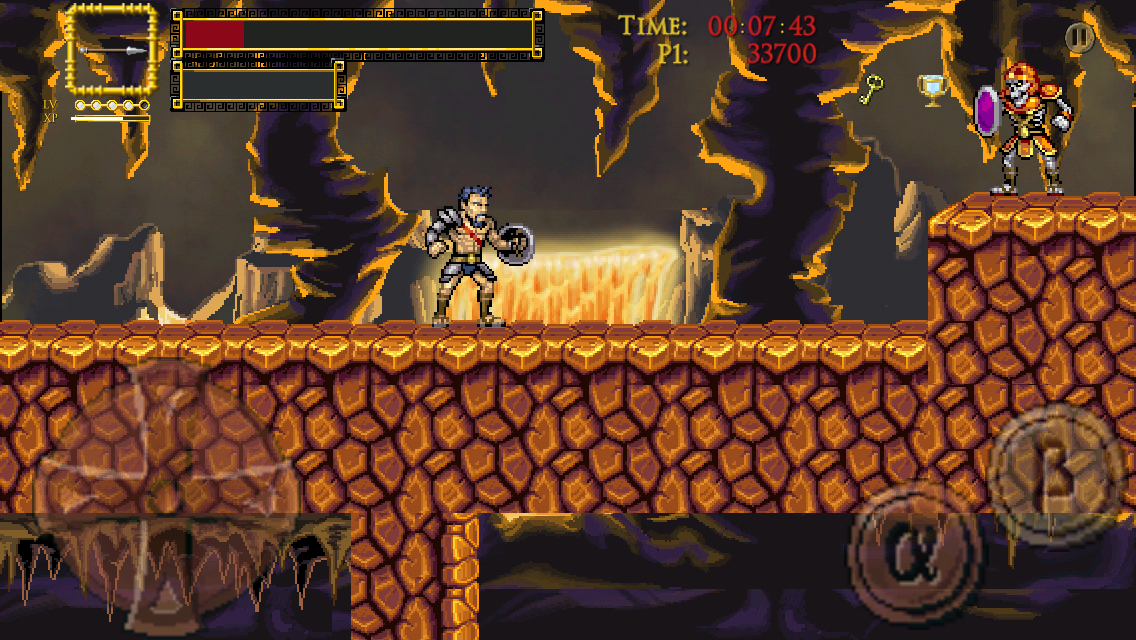 It’s too bad, because as a big fan of the genre and period this game is paying homage to, I really wanted to like it. The graphics are quite good, with some very nicely animated enemies and excellent visual design on the levels themselves. The level designs are very well done, especially taking into consideration the idea that many of them had to work for the character coming and going, which isn’t always an easy thing to design around. I love the interconnected map and the experience system that grants you new abilities. I loved picking up new armor and seeing that reflected on my character’s sprite. I also really enjoyed the boss fights when the game’s problems weren’t getting in the way. But that kind of describes Arcane Ghosts on the whole. It’s a very enjoyable game when its problems aren’t getting in your face, which is sadly most of the time.

For as much as it’s worth, the developer seems to be paying attention to criticisms in our forums and intends to update it, but I’m not sure if this can be whipped into a good game without completely ripping it apart and putting it back together again. For as much as we remember the cool graphics, big scary bosses, and tricky level designs of the true classics of gaming, those things all orbit around the most important part of why those games ended up as revered as they are: solid controls and gameplay. While I can feel the appreciation dripping from the visuals and the overall game design, the lack of attention to the core gameplay makes Arcane Ghosts feel less like a love note and more like a poison pen letter to the games it admires so clearly.