Seeing a remarkable resurgence on the App Store lately, developers seem to have flocked to the rogue-like to try and create the next cool simplified adventure. Tales of the Adventure Company (Free) tackles this trend in a different manner, by combining some of those rogue elements with a traditional, tile-based puzzler’s look and feel. It also succeeds at melding these genres to a degree far higher than most games, making it an excellent combination of puzzle and strategic depth.

Tales is a bit hard to describe gameplay-wise, but I would best classify as a combination of Disco Zoo (Free) mixed with a few simplified elements from Dungelot ($0.99). Each episode tasks the party with exploring a seven floor dungeon filled with enemies and heroes. Floors are explored by simply tapping on a tile to reveal what’s underneath. A random enemy on each floor holds the key to the next floor while rescuing heroes allows you to recruit them to your party (a maximum of four heroes to a party at a time). Enemy battles take place via simple turn-based combat with attack power and hit points as the sole stats. The last floor of each episode features a boss battle and defeating all the boss enemies wins the episode and unlocks the next. 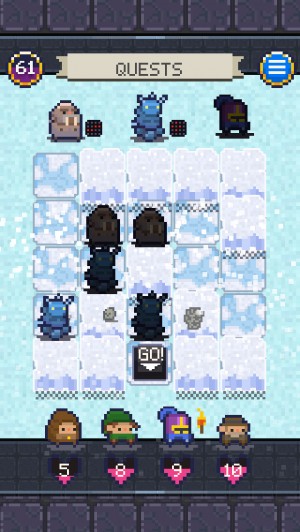 Sounds simple, but like all great puzzle games, Tales has a lot of hidden depth that makes it even better. The Disco Zoo inspiration comes into play with the fact that each enemy and hero on a floor has set patterns, allowing players to easily predict where all the enemy tiles are once you’ve unveiled a few. Adding to the strategy is a turn limit for each episode; players always have 100 turns to make it through all seven floors (the game ends if you don’t finish within the limit). The randomness of where the key is hidden comes into play, but a good player will be able to manage their heroes and battles along with understanding where each of the enemies and heroes are via their patterns in order to make each tile reveal as efficient as possible.

Speaking of heroes, Tales has a large variety of heroes and each has cool little traits that really change how players approach the game. Some specialize in doing damage while others focus on healing. For example, putting the Archer at the lead will cause any enemy revealed to take damage while the Priest will heal one hit point on the weakest. Those are pretty simple traits but others like the Adventurer (which gives you a free turn when you reveal an enemy) are a bit more nuanced. Regardless, once you find your party, there’s a lot of strategy involved with deciding which heroes should be in the lead depending on your current priorities. It’s a simple but awesome system that works very well. 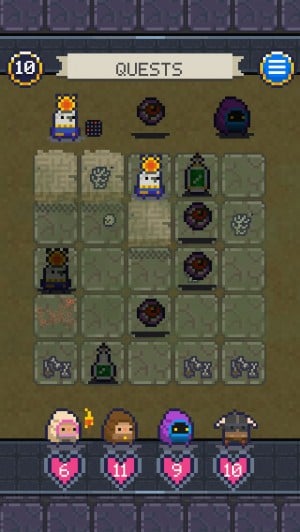 As if all the above wasn’t enough, each enemy and boss in Tales also has their own unique traits to take into account. Some enemies alter their own stats depending on enemies and tiles revealed, while others can simply cause party damage when revealed, or lower hero attack strengths when defeated. So, in addition to the simply keeping tabs on the appropriate heroes for which situations, you also have to make sure that you’re discovering and attacking enemies in the most efficient manner.

In case you couldn’t tell, I really love how all the elements come into play in Tales of the Adventure Company. Episode runs are the perfect length for portable play. Meanwhile, persistent quests attached to each episode encourage replayability and can be essential as quite a few award permanent stat increases to all heroes, a necessity to survive later episodes. There are a lot of small facets to keep track of, but they all come together into a surprisingly cohesive puzzle title that is both approachable and deep. Most importantly, this is a game that rewards the player that pays attention to and takes into account all these little strategic elements.

A perfect example of how to take a simple puzzle game to the next level, Tales of the Adventure Company is an awesome game that everyone needs to check out. It’s perfectly developed for the platform, hits all the elements for a great puzzle/RPG and adds some new twists in how it combines previously seen elements. If you haven’t checked this out already, you really need to download it now.