The last three major LEGO releases on iOS certainly represent quite the platter. LEGO The Lord of the Rings ($4.99), as a shared release with the other major handheld game systems, was cut down from the console versions in many respects, offering a few decent-sized hubs but taking out the interesting RPG elements. Still, while some parts were lost, the levels at least stayed fairly faithful to the console title. Then, we got a port of LEGO Star Wars: The Complete Saga (Free), which seemed to be a fairly direct port of the console games and, perhaps significantly, did not release on the 3DS and PlayStation Vita. I’ve mentioned this in earlier LEGO reviews, but it’s worth repeating for context’s sake. The entire handheld LEGO line’s design is held back by the weakest hardware in the group, and that still, to this very day, includes the original Nintendo DS.

I think that strongly informs what we’ve received in LEGO Marvel Super Heroes: Universe In Peril ($4.99). Watch that subtitle, because it’s important. Since LEGO Batman 2 ($4.99) released, the home console LEGO games have driven towards open worlds and the licenses that fit that idea. After all, if you’re going to give me Superman as a playable character, I want to be able to fly around wherever the heck I want. It was a great idea that perfectly fit the LEGO concept of packing in secrets and tons of playable characters with unique abilities. If you don’t have time to sink into a level, you can at least take your characters of choice around to hunt for more new characters or secret gold bricks. It’s a big old sandbox, and I think that’s something that is core to what the LEGO toys are all about. Marvel fans with consoles finally got theirs late last year with the console release of LEGO Marvel Super Heroes. Handheld fans got something a little bit different. 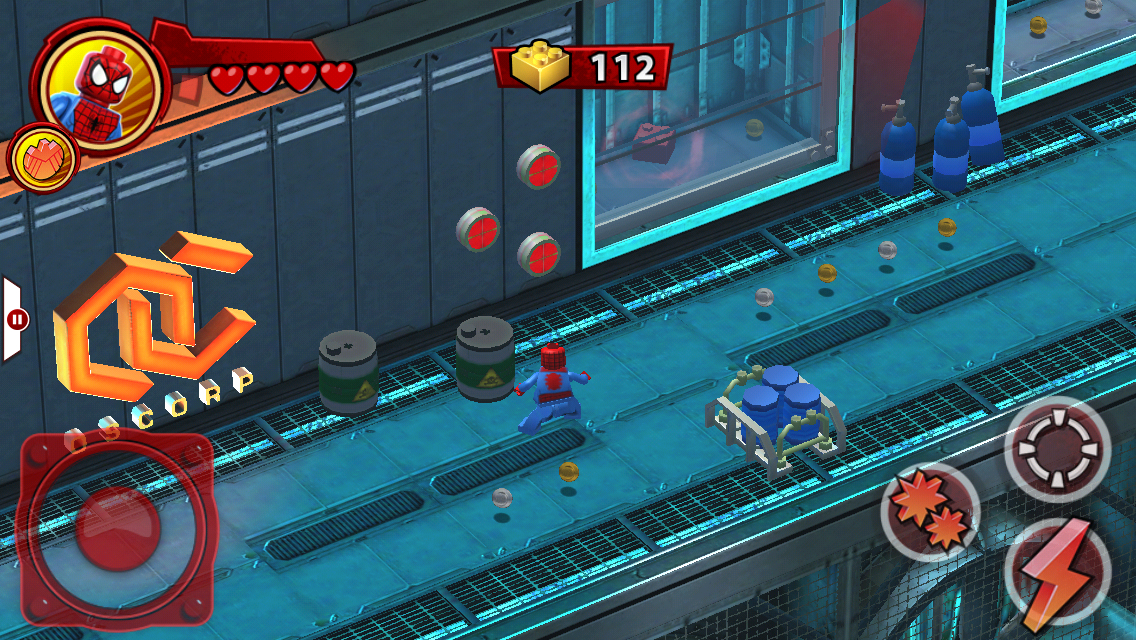 The presence of that subtitle, missing from the home versions, offers a bit of a clue as to how authentic an experience you should expect. You see, something important happened between LEGO The Lord of the Rings and LEGO Marvel Super Heroes on the consoles. Having finally breathed its last gasp, the Wii did not receive a port of the latter, for the first time in quite a while for the LEGO games. Perhaps emboldened by dropping that particular technological albatross, LEGO Marvel Super Heroes pushed the level designs further than prior games had dared to. The handheld versions, dragging the now nearly 10 year-old Nintendo DS along with them, could no longer manage even the compromised versions we saw before. As a result, we’ve got a game that is farther from the console version than we’ve seen in a long while.

It might be the best thing to have happened for the handheld series, in my opinion. I’ve never been fond of the halfway approach previous games have taken. In the console versions, the hubs serve as an important palate cleanser for the lengthy and often repetitive stages. After a particularly long level full of somewhat monotonous smashing and bashing, it’s relaxing to unwind in the hub and fool around with all of the secrets and easter eggs. Cutting that element out left the handheld versions feeling like a tremendous drag. They were a serious of long, tedious stages, completely ill-suited for handheld consumption and with none of the goofy sandbox stuff that actually would fit portable play. Add into that the fact that the iOS versions had their economy skewed to sell IAP, and you have a recipe for disaster. Nobody wants to grind 20 minute long levels over and over again to unlock their favorite characters. I’d rather have something that feels totally different if the developer can’t manage to deliver the proper experience, and that’s exactly what Universe In Peril represents. 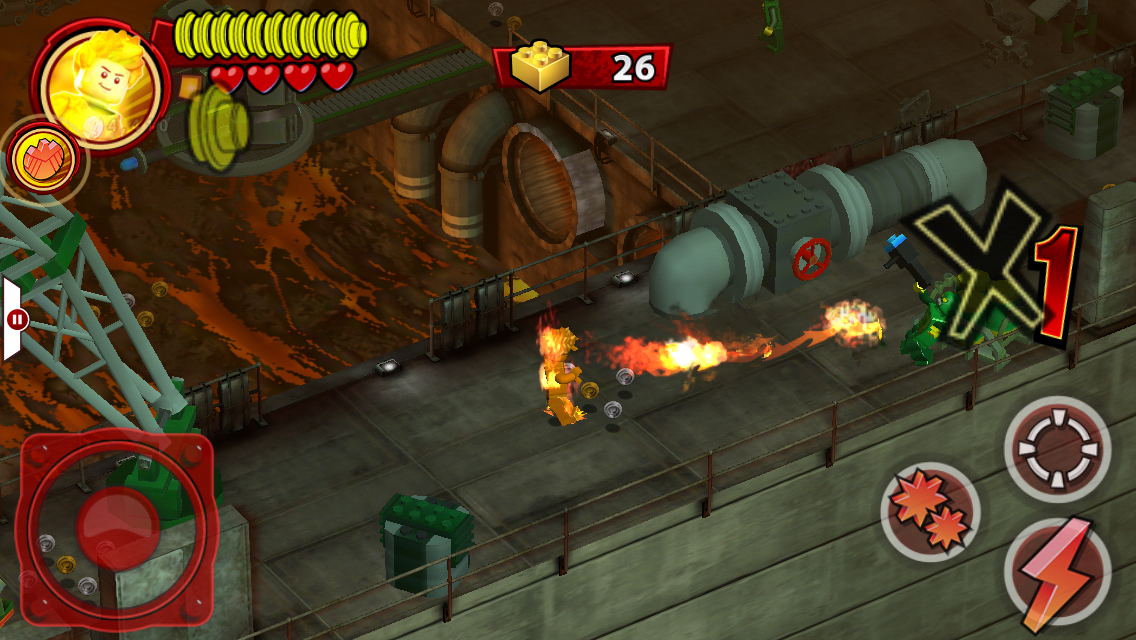 If you’ve played one of the console versions of the game, you will find vestiges of it here. The game takes 12 of the console stages, slices them up into three levels apiece, and leaves plenty of excess on the cutting room floor. The open world is naturally gone entirely, and that does mean you don’t get to play around with the various heroes’ powers quite as much as you could in the other version, but let’s be honest and admit we weren’t going to get that anyway. Instead we have choice cuts, stages that are actually suited for completing in short sessions. It’s a nice change from the long levels with too few checkpoints and places to save that we’ve complained about in previous reviews. In each level, you’re given a list of 10 different goals to complete in order to earn gold bricks and unlock new characters. Some of these goals are the same for each level, but more than half of the list will be unique to that particular stage. In a bizarre way, it reminds me of the classic Tony Hawk’s Pro Skater games, though you’re not under time pressure here, with the obvious exception of runs where you’re trying to beat the target time.

The roster has also seen some deep cuts. Instead of the 155 characters of the console version, many with multiple costumes, you instead get 105 characters including costume variants. It’s still a pretty large list, and it does include some variants not seen in the console titles, like Scarlet Spider. That said, having Iron Man occupy eight character slots while reasonably big characters like Colossus, Gambit, and Iron Fist get cut entirely is a bit unfortunate. That’s not even mentioning the awesome niche characters missing, like Rocket Raccoon, Howard the Duck, and Squirrel Girl. It kind of feels like if the character hasn’t had a movie, they had a low chance of being included in the handheld roster. Too bad, Groot, you were so close. As usual, to unlock characters you first have to fulfill their unlock conditions, which are for the most part connected to the level goals, and then pay out the appropriate amount of studs. Like the game on the whole, the characters have had their abilities streamlined, but it works out well enough for the game’s new design. 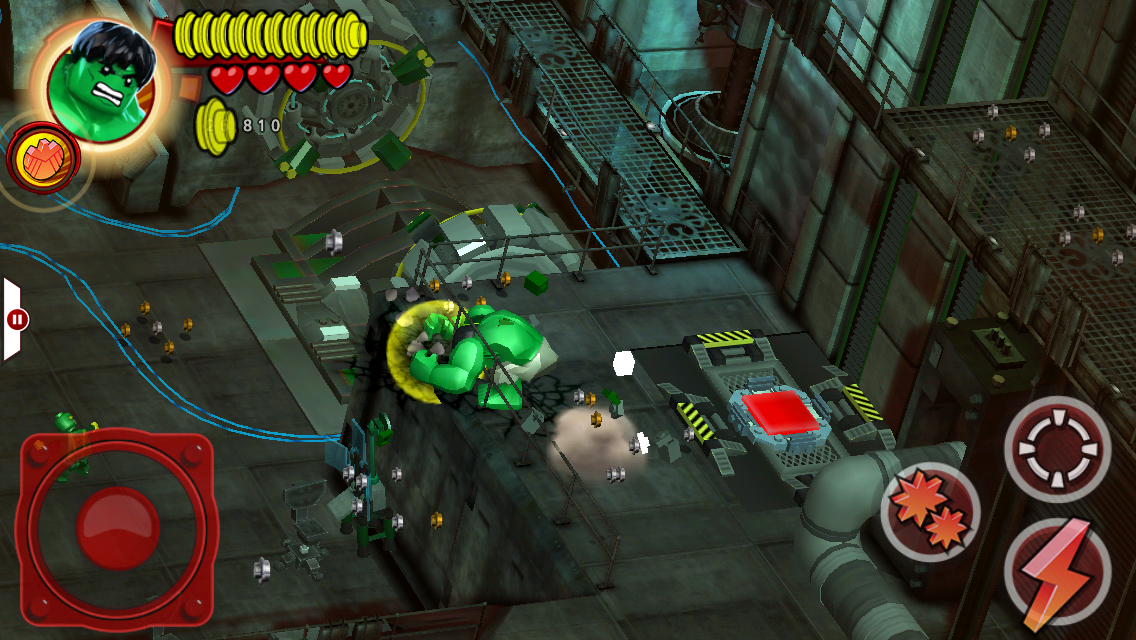 One happy side effect of the new level setup is that it doesn’t feel like nearly as much of a grind to unlock the characters you want. In many previous LEGO games, you had to buy the doubler to have even a hope of unlocking most of the guys you wanted without replaying levels to the point of nausea. Since you’re likely to be replaying the short levels anyway to check off goals, you’ll likely be surprised at how steadily you can afford to buy new characters. The stud prices on them are also quite low relative to earlier games, probably due to the game’s overall brevity and increased importance placed on having extra characters available. Whenever you enter a level, you can pick your partner from whichever characters you’ve unlocked. The game initially gives you the Hulk, who is a fine partner by most accounts, or at least, Rick Jones’s account, but many of the level goals require a character with the right abilities. It pains me to say that a giant green fist is not the universal key common sense dictates it would be, so you’re going to need someone who can fly, someone who can melt steel, and so on. You’re going to need Iron Man, most of the time.

Another thing I like about this game over prior LEGO games is that you can actually fail the stage. Normally in LEGO games, if you run out of hearts, your character disassembles, you lose a few studs, and you respawn more or less where you were standing. It’s impossible to lose, and you can even recover most of the studs as long as you didn’t die by falling down a pit, so that’s not much of a punishment either. This is great for very young kids, but I like a game to have some sort of challenge to it, and LEGO games usually have very little. Well, in Universe In Peril, you need to be a lot more careful, since if you run out of hearts, you fail the stage and have to start over again. Since the stages are only a few minutes long now, this is less frustrating than it might sound, and it gives the game just a little bit of bite that makes it a lot more fun. 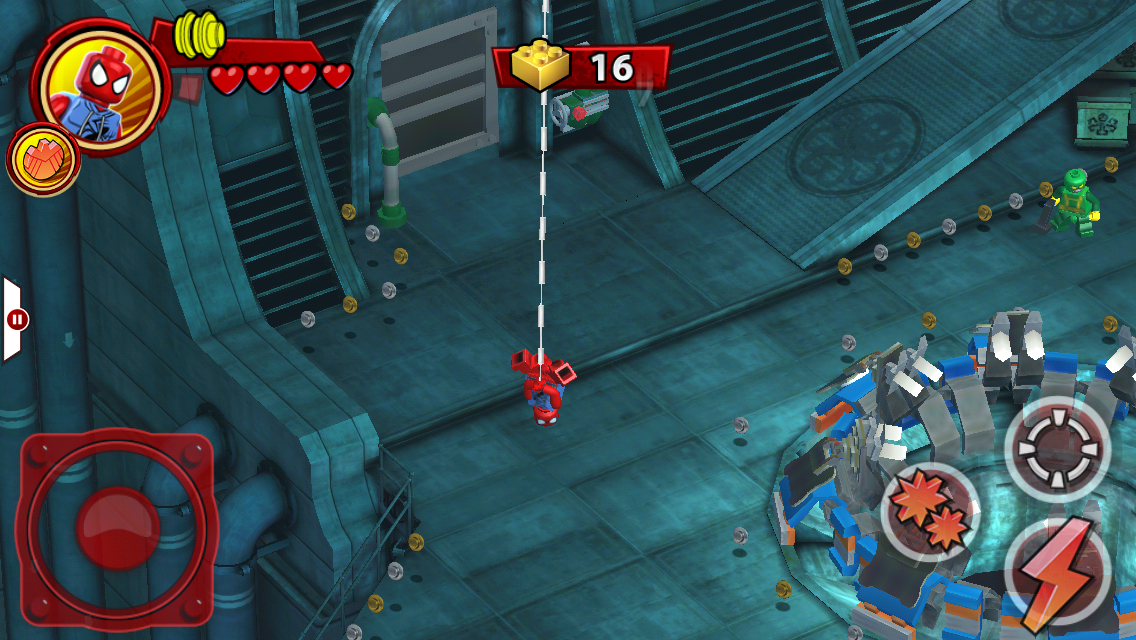 Unfortunately, at least one old problem is back again. With every installment of the LEGO series on iOS, the developer tries some new things to try to improve play control, but there’s always something that doesn’t work out just right. In recent releases, they’ve offered a choice between gesture-based controls, virtual buttons, and even MFi controller support. LEGO Marvel Superheroes takes a bit of a slide back. There is no controller support, the gesture controls are awkward and unreliable, and even the trusty virtual button option forces you to make extensive use of gestures that the game appears to have a lot of trouble reading. Taking to the air requires a two-fingered upward swipe, but the game often mistakes that for a single fingered swipe, making you dodge instead. Super moves are also a little awkward to pull off, with each character requiring you to draw a different shape to activate the power, but only giving you a small, easy-to-miss cue as to what that shape might be.

In terms of presentation, you get the usual LEGO treatment here. The cut-scenes, lifted from the console versions, are pretty funny. Marvel’s brand of humor lines up well with the LEGO style, and I don’t think I’ll ever get tired of watching Hulk clean up after his messes. Since the camera is essentially fixed at a three-quarters isometric perspective, there aren’t any of the camera problems that sometimes cropped up in other titles. There are lots of cute visual gags in the character animations, and the game runs nice and smoothly. The voice acting is sparse outside of cut-scenes, though it continues the odd trend of making Iron Man sound a lot younger than he should. It calls Teen Tony to mind, and nothing should ever do that. The package is rounded out with some Game Center achievements that are interesting both in name and what you need to do to fulfill them. 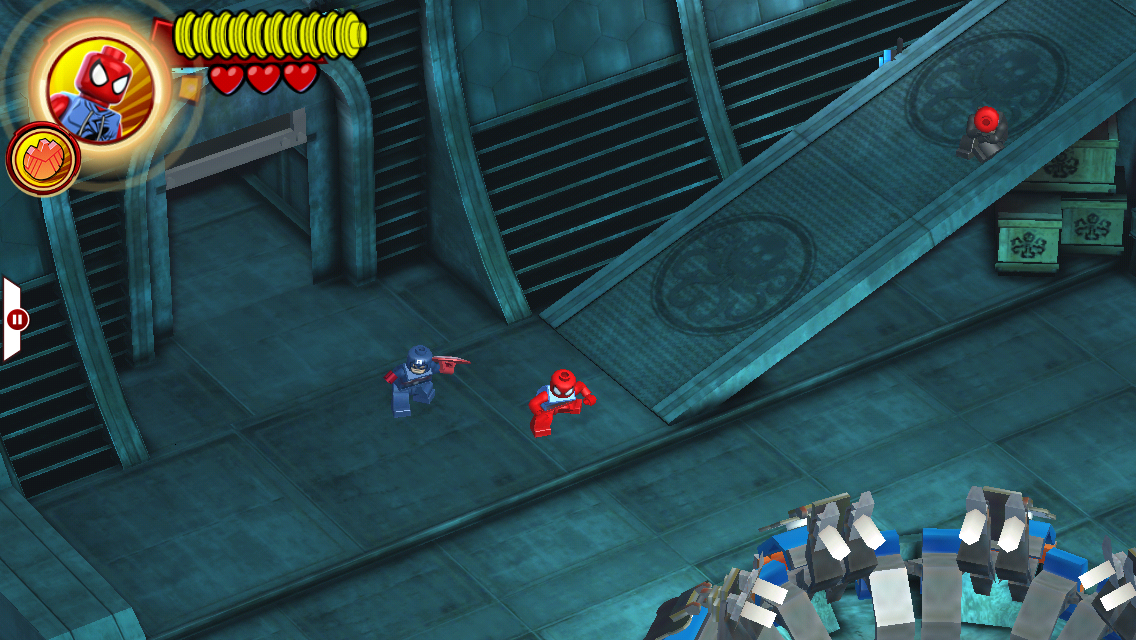 Also as usual, there’s quite a large selection of IAP on offer here for people who want to speed up the process of unlocking things. I didn’t bother with any of it this time since the process of unlocking my favorite characters didn’t feel like a chore for once, but the option’s there for those who want it, including an absolutely ridiculous 10x stud booster. None of the content is hidden behind a paywall, though some of the characters do require you to complete some tricky goals.

If you come into LEGO Marvel Superheroes: Universe In Peril looking for a port of the console games, you’re going to walk away more disappointed than usual. However, if you come into the game looking for something fun to play in its own right, I think this is a better game than usual from the LEGO people. In a perfect world, I’d love to see a proper port of the console versions, and I firmly believe the hardware is capable of it, but in lieu of that, I’d much rather have something that succeeds on its own terms than something that fails at trying to be something else. It might not be what you expected, but that’s not necessarily a bad thing.