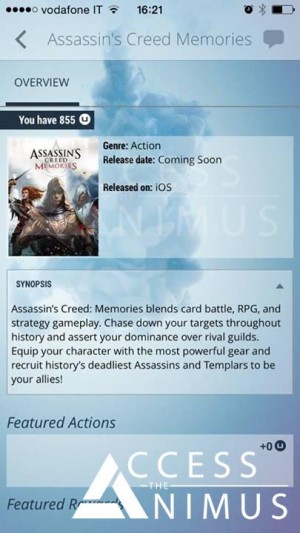 Spotted on our forums earlier this morning is the Uplay screenshot seen to the right. Literally nothing else about this game seems to exist anywhere else, so, details are limited to what it tells us. Part card battler, part RPG, and part strategy game, there’s a lot you could be doing in Assassin’s Creed Memories. Either way, it’s “coming soon," so we hopefully won’t have to wait too long to find out.

If nothing else, it’ll be interesting to see how it compares to Assassin’s Creed Recollection, the Assassin’s Creed card game released in late 2011 which doesn’t seem to be on the App Store anymore. Recollection was surprisingly decent, so, fingers crossed that Memories shares some of that similar gaming magic.

Typically the time between “coming soon" and a release isn’t very long when it comes to big publishers, so I’m guessing we see a surprise appearance on the App Store sometime inside the next couple weeks.