Free to play is one of the hottest topics in gaming, and especially in mobile gaming. At its best, the free to play system can offer a way for a game to reach a wide audience and allow those who enjoy the game to pay money into it only if they enjoy it, while avoiding the risk of buying a game up front that they end up not liking. At its worst, free to play can cause developers to design the mechanics of the game itself around the pay system in a way that pushes players to make purchases in the game in order to remove obtrusive paywalls or boring grinds. While I think most everyone will agree that there’s a “right" way and a “wrong" way to do free to play, something that’s equally important to consider is if the type of game being developed even fits the free to play style.

That’s exactly how I felt about Double Stallion’s Big Action Mega Fight! ($2.99) when it launched last November. It’s an old-school style brawler with colorful visuals and unique touchscreen controls, and it’s definitely the type of game geared more towards the “hardcore" crowd, rather than the larger casual audience that eats up stuff like Candy Crush. So it felt pretty out of place that it was a free to play game. 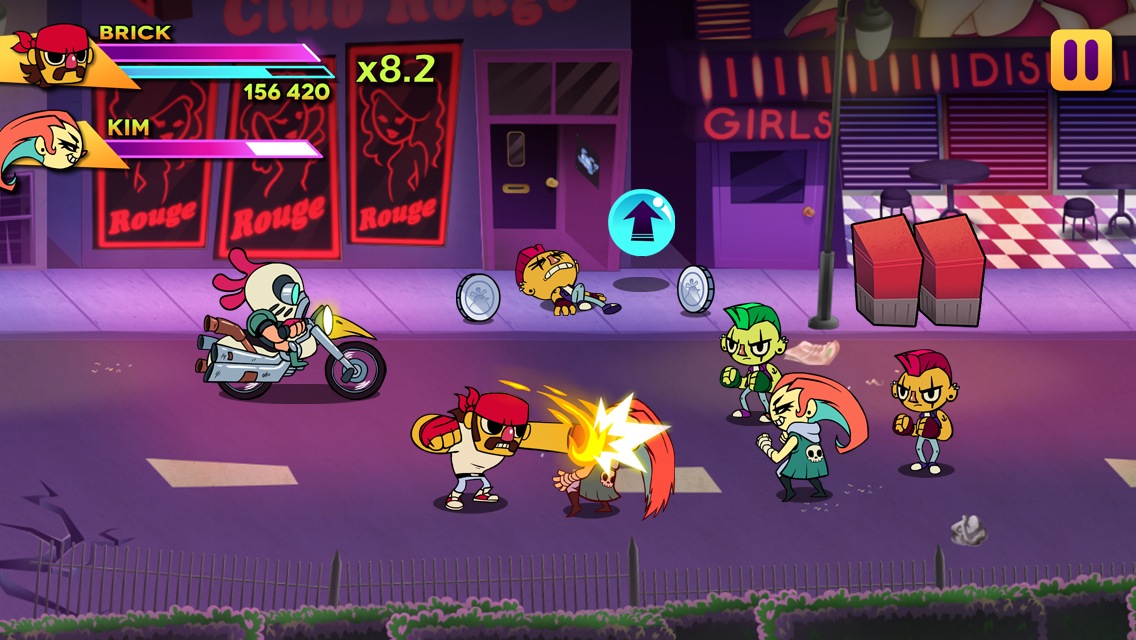 Beyond the typical, grindy, dual-currency system it employed for character progression, there was also a timer tied to the number of lives you were given. An energy mechanic like that is by far the most loathed aspect of the free to play model, though ironically that’s exactly how a game like Big Action Mega Fight! would operate in an actual arcade. Still, anything that forcibly prevents you from playing a game is usually a bad thing (I’m looking at you, Smash Bandits).

Most the feedback received towards Big Action Mega Fight! was along the lines of how the free to play system ruined an otherwise fantastic little brawler, and Double Stallion took that feedback to heart. Over the last several months they’ve worked to remove all in-app purchases from the game, ditch the secondary currency, ditch the timer aspect, and rebalance the whole game as a pay-once experience. It’s turned out beautifully, and this new version is available today as an update to the existing game in the App Store.

The progression system in the game feels much more streamlined, with just one currency to focus on: coins that are earned by beating up bad guys and completing levels. New abilities are unlocked as you complete levels in the game’s campaign. It’s all nice and tidy, and completely dependent on actually playing the game. Furthermore, existing owners of the free to play version have had all their previous in-game currencies refunded. It finally feels like Big Action Mega Fight! has achieved its potential as an homage to ’80s and ’90s era beat’em ups. In addition to the switch to paid, this update also adds in new story cutscenes and MFi controller support.

If you like plucky little brawlers and never checked out Big Action Mega Fight!, or if you did check it out and were turned off by the free to play-ness of it, give this updated version a spin. It really is a lot of fun. The new paid version of Big Action Mega Fight! is currently on sale for $1.99 to celebrate the new update, and will be jumping to its normal price of $2.99 July 1st.