Some puzzle games have such simple mechanics that just about anyone can pick them up and do fairly well without too much effort. Games like these usually rely on something external to the mechanics to add a greater challenge, such as a timer or giving you a penalty for making mistakes. Perfect Paths ($1.99), from Lums ($1.99) developer Hyperbolic Magnetism, is not one of those games. In the broad sense, the rules aren’t that hard to understand. You’ve got a certain number of different colored blocks that each need to be moved to a matching-colored goal. You do this by drawing the paths each block should move, then press the button to execute your plan. If all goes well, you can enjoy watching each block make its way to its final location, all according to your brilliant strategy. 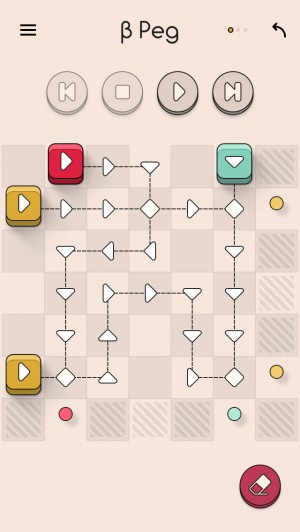 There’s a lot more to it than that, though, and simply knowing the goal doesn’t necessarily mean it will be easy to achieve it. The blocks can and will interact with each other, often throwing off your carefully-planned routes, forcing you to go back to the drawing board and try again. If you’ve played Trainyard ($0.99), SpaceChem ($2.99), or even this very developer’s Trappped ($3.99), this game has quite a bit in common with them. Although each new concept of the game is introduced with a useful tutorial, the game wastes very little time putting your understanding to the test. The game has a small count of levels relative to many puzzle games out there, and to its credit and detriment, it wastes very few of them holding your hand.

The game basically comes down to traffic management and navigating areas where you can’t place an arrow. Sometimes you need to get a block to move through a square you can’t draw a path on, so you’ll need to push it with another block. You also have to be very careful about how your blocks and paths intersect. While you can make use of a junction point to allow different blocks to pass through without changing direction, if you do need to change the direction of the path, you can only do so in one direction. Since this will affect every block that passes through and not just the one you may have wanted, you need to think very carefully when blocks are in close proximity to each other. Eventually, the game also introduces links, where you can and usually have to junction two or more blocks together, causing them to drag each other along. Once this concept is added in, the puzzles start to include linked goals that you have to park your little block train into, giving you yet another thing to worry about.

While planning out your paths, it’s important to keep in mind the way the game prioritizes directions. Basically, when you press the button to start everything moving, the game follows a particular turn order for movement. First, all the blocks moving up will go, then all of the blocks moving down, right, and left, before going back around to move blocks heading up again. This is a key point to remember if you want to finish the puzzles, and it might be the actual most important point to keep in mind when you start challenging for a better score. Your score is determined by a few different factors, but one of them is how long it takes you to reach the goal. Taking advantage of the turn order gets you to the goal that much faster, earning you a higher score. 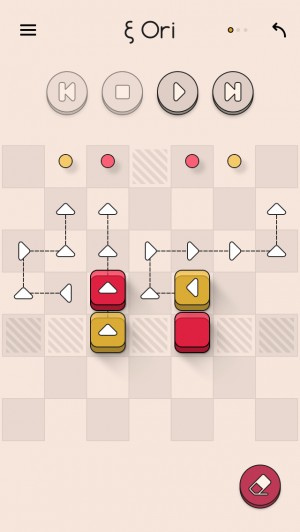 As I mentioned earlier, the game’s puzzle count is a bit lean, with just under 50 available at the moment. The game promises new puzzles every week, though, so if that relatively low count is a problem for you, it’ll likely be solved in the long run. Even without any further additions, the game still has plenty to offer. The upfront challenge is pretty high, and even once you’ve gotten your brain used to the game’s tricks, there’s still the possibility of revisiting stages to find a different and better solution. The game has full Game Center support for leaderboards, with a board for each grouping of stages in addition to one for your total score. You can see the high scores and your standing amongst your friends right from the level select menu, goading you to do just a bit better this time.

I should also point out that while the game is hard, it’s hard in the puzzle sense. You have all the time in the world to plan out your paths without penalty, and after setting them into motion, you’re free to review the movements step-by-step to try and find what went wrong and how best to fix it. You can then go back and adjust your paths, again at no penalty, and try again. The difficulty here is entirely in your ability to wrap your brain around the game’s completely transparent logic. It neither needs nor wants anything more from you than that. Of course, this means that if you get stuck on a puzzle, you’re not going anywhere until you actually focus on the problem and reason it out. Fortunately, there are always a few open puzzles to choose from, so you can try a different one if you can’t figure out what to do. At the very least, the flexibility involved in each puzzle’s solution means you aren’t just looking for a single possibility.

Perfect Paths isn’t going to click for everyone. You have to truly enjoy the idea of carefully planning every single move, watching it all go out the window, and tweaking it again and again until it’s right. Some people just won’t be able to get into its harsh, deliberate gameplay. Those that do catch on to how it works are going to have a great time working their way through the puzzles again and again to try to get closer to perfection. If you enjoyed any of the similar titles I mentioned at the start of the review, by all means, jump into Perfect Paths without hesitation. It’s a very high-quality, polished effort, even if the difficulty curve is probably a bit too high for its own good.