For the life of me, I really don’t understand why I find digging so much fun. Whether it’s digging at the beach, at the park, in the shoe section of Walmart, or in a video game, I really seem to get a lot of enjoyment out of displacing soil. If you think I’m weird, think of all the awesome video games about digging: Dig Dug, Mr. Driller ($4.99), Super Mario Bros. 2, Minecraft ($6.99), and Steamworld Dig, just to name a few highlights. Now, I’ll grant you that in some of those games, digging is just a portion of the game, but there are quite a few games that center around the idea. Doug Dug (Free), the new game from pixa ($0.99) developers The Electric Toy Company, is all about digging for treasure and the risk versus reward that presents itself from the concept.

You play as a dwarf named Doug. Like many dwarves, Doug is pretty keen on treasure, and he’s not about to risk his hide fighting dragons when he knows there’s plenty of perfectly good treasure underneath his feet. Lucky for Doug, he’s got quite a talent for digging, perhaps exceeded only by his lust for loot. Doug will not stop digging until he is dead. That’s the game. It’s you against the endless, randomly generated earth, packed with treasure and hazards in nearly equal measure. Keep going down until you die, then try again and see if you can beat your score. There are two different metrics to challenge yourself on. You can try to get as deep as possible, or you can try to get as much treasure as possible, and it’s surprising how often these two goals are at odds with each other. 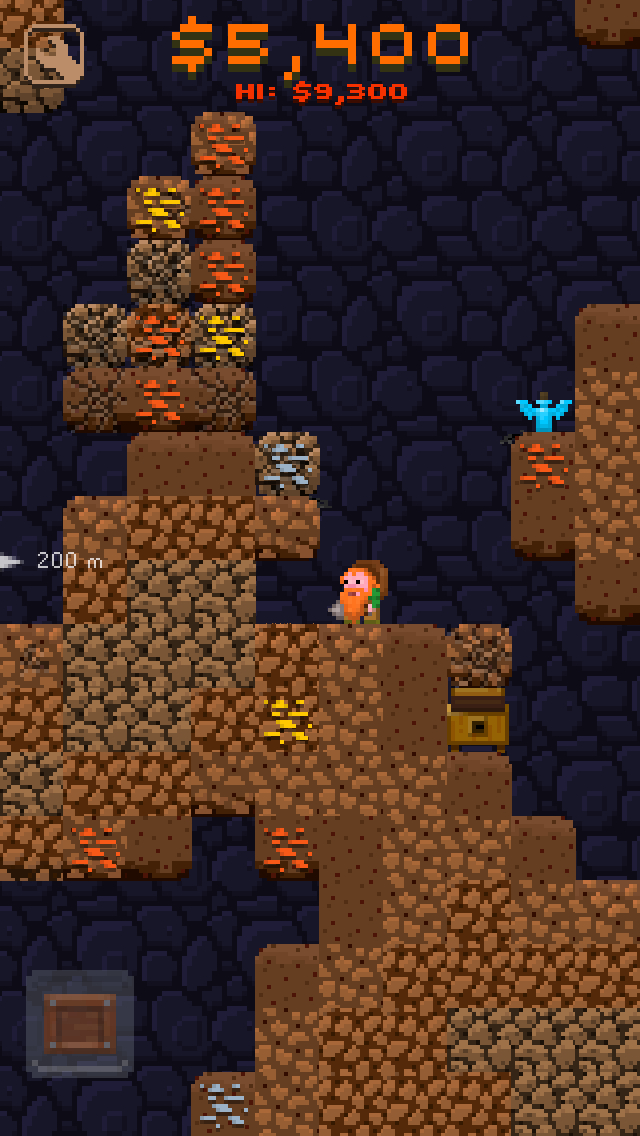 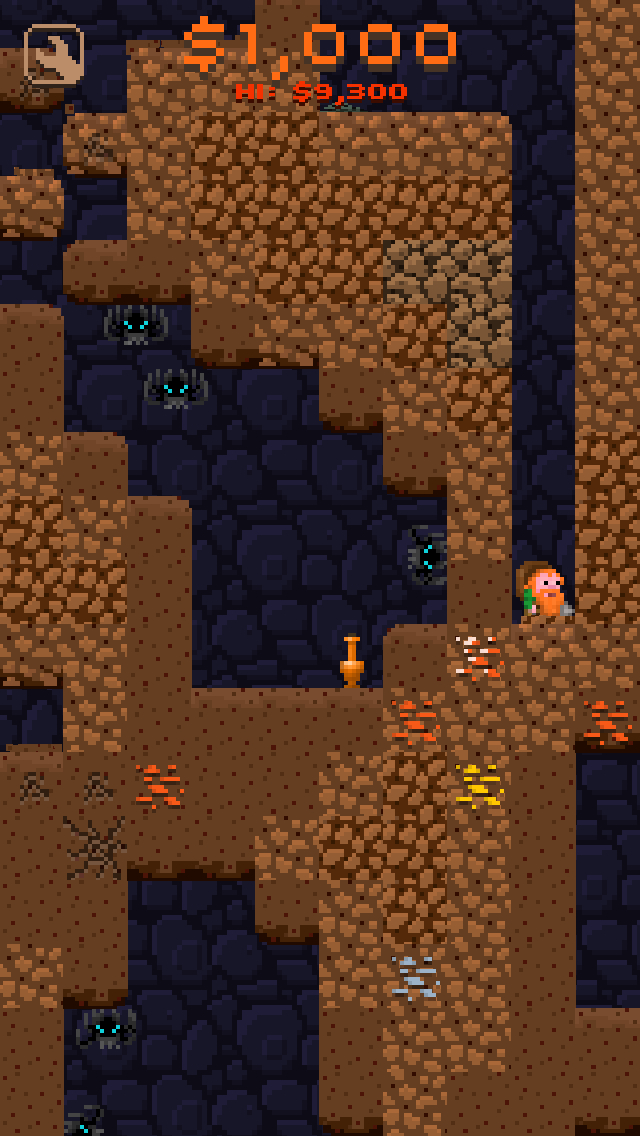 To dig, all you need to do is touch the screen anywhere and move it in the direction you want Doug to dig. It works fairly well for the most part, though at times you might find yourself digging in the wrong direction because your finger slipped. Doug can dig in any of the four cardinal directions, and, provided there’s nothing in the way to dig, you can also move him left and right by the same method. Apart from this, the only other action you need to worry about is using a stocked item. Doug can carry one item at a time, displayed at the bottom of the screen and accessible by touching its icon. For the most part, treasure is easy to spot among the blocks of regular dirt, and you collect it automatically by digging the square it’s on. Sometimes you’ll come across a treasure chest or a special item box. Interacting with these is as easy as banging them with your shovel, though making use of the latter costs you some of your hard-earned treasure. 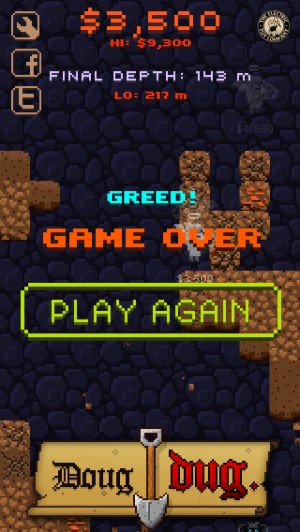 You’ll also come across increasingly aggressive monsters who, while deadly, can be put down with a whack of the shovel so long as they don’t get the drop on you. The monsters can be dangerous in large numbers, but there are worse things out there that will put an end to your treasure hunt. The two most threatening hazards often gang up on you. As you dig, the structural integrity of the ground above you is often weakened, and if it gets too weak, it will collapse. If you’re under any of these falling pieces, well, you’ll be staying under there. Sometimes it’s not easy to see what will cause a collapse, but for the most part, you’ll have a pretty good idea that you’re about to cause one just by paying attention to the degradation of nearby blocks. If you’re cautious and pay attention, the risks of being injured in a collapse are quite minimal.

This, naturally, is where the other very dangerous hazard comes in. You know that digging over there will cause a collapse that will put you at severe risk of being squashed or freefalling to your doom. You know it. On the other hand, there’s a block over there with some gold in it, and that treasure chest is very tempting. You can probably dig out the blocks in just such a way as to… whoops, you’re dead. Your arch-nemesis in Doug Dug, more than monsters, more than collapses, more than scorching hot magma, is your own greed. Play it safe, and you’ll probably play longer and go farther. You just have to be strong enough to let go of those sparkling gems you can just about reach…. whoops, you’re dead again. Well, Doug didn’t get into this job for the retirement benefits.

It’s amazing how well the game tempts you to do stupid things. Almost every single time you die, you’ll think to yourself how easily that could have been avoided if you only passed up on that one, stupid treasure. Then you’ll start another round and a few minutes later, you’ll do it again. Maybe you’re made of stone, though, and you’re planning on going for the depth high score instead of the treasure high score. Even in this case, there’s still a very good argument to be made for collecting treasure, since you can use it to buy items that will greatly increase your chances of surviving. Even the items themselves can serve as deadly temptations. Who couldn’t use a featherfall potion to slow their fall when the floor crumbles underneath you? That support beam item can protect you from any number of collapses in the same column, it’s surely worth risking… whoops, you’re dead again.

Doug Dug has all of the features befitting a good score challenge game. While you’re playing, you can always see your top score sitting right underneath your current score. Certain milestones are marked with an unobtrusive line, and when you approach your best depth, it’s clearly marked. As you play and die, the shaft becomes littered with the ghosts of past Dougs, clearly showing where and when you bit the dust. The game also has full Game Center support for leaderboards and achievements. The two leaderboards cover the two different targets, and the list of achievements has a good variety of expected and unexpected goals, some of them with amusing or cute names. This is a really fun game to compete with your friends on if you can find a few like-minded gamers. If you’re having trouble with that, check out the thread in our forums to fill out your list.

Through a careful balance of risk and reward, Doug Dug manages to create a great game out of the simple essence of digging. The focus on going as deep as possible echoes the great Mr. Driller, while collecting goods, battling enemies, and using somewhat controlled collapses to take out enemies and clear a path calls to mind the great-grandfather of the digging genre, Dig Dug. If you dig digging like I dig digging, then I’m almost positive you’ll dig the dig with Doug Dug like I dug it.