Rolling Zimro ($0.99) is an endless runner with a gimmick. Actually, it’s an endless runner with two gimmicks, but one of them is just set dressing. First, and most obviously, this game has a big old coat of recreational drug culture paint covering it from head to toe. The main character is a thinly-veiled pot-farmer, some of the enemies look kind of like bongs, the name of the currency you’re collecting is ‘munchies’, and most of the power-ups are drug references. That’s going to be a selling point for some people and a turn-off for others, but personally, I’m kind of indifferent.

The other gimmick is that the endless road you’re running on basically spins underneath your feet. Zimro, the protagonist, stays in the same place on the screen for the most part, and everything just kind of rotates at him. I’ve played runners before where the character is running around a circular object, such as the brilliant Air Supply: Infinite ($0.99), but I’ve never seen the idea presented in quite the same way it is here. It’s visually striking, and it’s also kind of nauseating. It’s very probable that the cause of your death will come from your eyes going funny rather than slow reaction on your part. I’m not sure whether to applaud the game for this or condemn it. At the very least, it gives the game some kind of unique quality that makes it stand out in mobile gaming’s busiest genre. 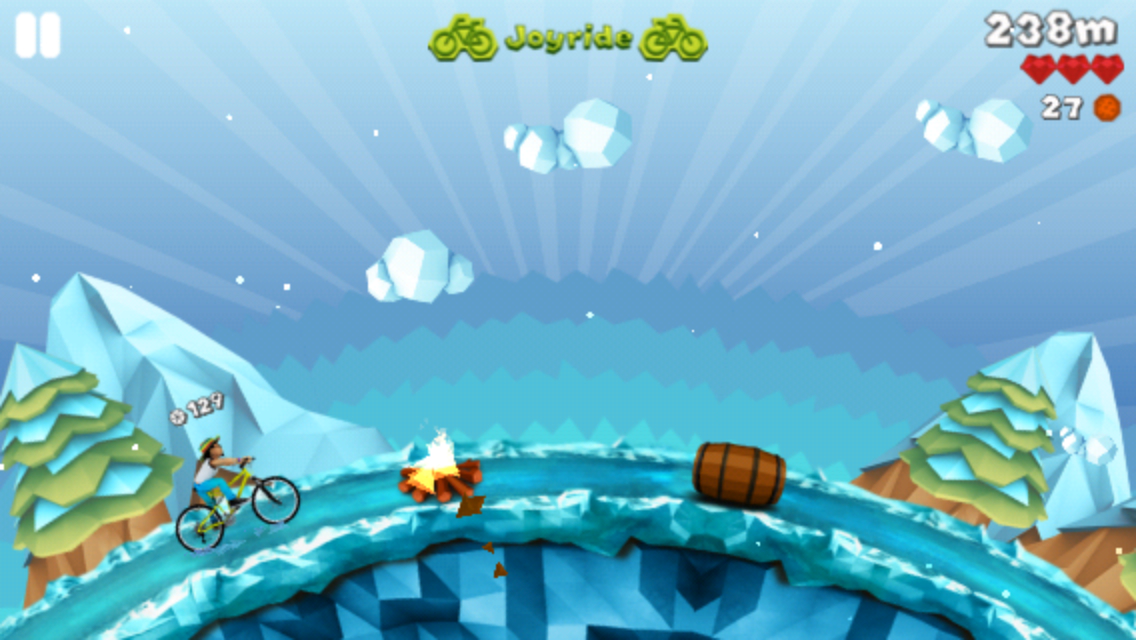 As you run, the background changes now and then, but the obstacles are generally the same. There are pits, stones, and fires to jump over by touching the left side of the screen, and logs, aliens, and UFOs to slide through or under by touching the right side of the screen. It’s a very simple and straightforward set of controls, and I never felt like they let me down at any point. Like in almost every runner, you’ll collect currency as you run, and you can use that currency to buy items and power-ups. It’s mostly the usual selection, like start dashes, temporary invincibility, and magnets, along with a few less common power-ups like the very useful shrooms that slow everything down for a short while. Given that Rolling Zimro is a paid game, I’m not really thrilled with the economy set up here. Even buying the first level of everything costs quite a pile of munchies, and it only goes up from there. The game is naturally quite willing to sell you more for real money if you’re short.

Generally, the placement of the objects in the stages is fair enough that it won’t run you into any unfair walls, but you will get the occasional group that would only be avoidable if you were psychic. I actually found Rolling Zimro to be pretty easy initially thanks to its generous allowance of three hits per run, letting you put in a decent distance and collect a good bunch of munchies right from the get go. Invariably, though, my run would end when I simply couldn’t continue to watch the screen anymore out of sheer dizziness. It’s a weird feeling, and not one I’ve encountered many times in all my years playing games. Even a half hour after putting in some solid time on the game, I still feel a bit off. Don’t play this before you have to operate heavy machinery or anything.

In other respects, this game checks off all the boxes. There are lots of different environments to run through, plenty of power-ups to vary the gameplay, a repetitive yet catchy looping theme, and Game Center support so you can compare your distance with other players and unlock some achievements. There’s nothing clearly lacking about the game’s take on the infinite runner genre.

The real problem with Rolling Zimro is that it has a price tag in a genre full of great free games, something it never truly manages to justify. The game economy feels like it’s in the same place as most free runners, the mechanics aren’t anything interesting or unique, and the enjoyment you get from playing isn’t different from any other competent runner. Its two differentiating points are just as likely to turn you off as turn you on. Essentially, you could get the same effect of playing Rolling Zimro by playing Jetpack Joyride (Free) in an industrial dryer, and you’d have two extra bucks in your pocket at the end. Check it out only if you’re a die-hard runner fan or want to see what it feels like to get sick from playing a so-so game.