Candy Crush Saga (Free) creator King has a fairly extensive catalog of puzzle games it has developed over the last several years. Their iOS lineup is just a small fraction of what it has released, though it’s fairly representative of King’s strengths and weaknesses. I think it’s fairly safe to say at this point that its games have very broad appeal, with people of both genders, all ages, and many walks of life having a great time playing them. I think it’s also pretty well-known that its games are really, really hard, and sometimes it’s difficult to tell if things are rigged against you just to sell you IAP or simply just randomly cruel to keep you from flying through the games. I think it’s also widely-accepted that many of its games owe a very large debt to existing puzzle games. King’s match-3 games, like Candy Crush or Farm Heroes Saga (Free), use familiar mechanics and add a few twists, with the result being at least as original as, say, Dr. Mario is to Tetris ($1.99).

Some of King’s games, however, are a lot closer to their obvious inspirations. Bubble Witch Saga (Free) is a fairly blatant imitation of Taito’s Puzzle Bobble/Bust-A-Move. You shoot colored bubbles from the bottom of the screen, trying to match three of a kind to remove them from the play area. The sequel, creatively titled Bubble Witch Saga 2 (Free), takes the extremely uninspired gameplay of its predecessor and adds many of the things we’ve seen in recent games from King. The result is something that feels a bit more removed from Taito’s game, but still awfully close. It may well be that the idea is just too specific to try to build on without coming off like a clone. That said, while I probably wouldn’t recommend this over New Bust-A-Move ($4.99), I would recommend it in addition to that game. I think there’s room for both in the world. 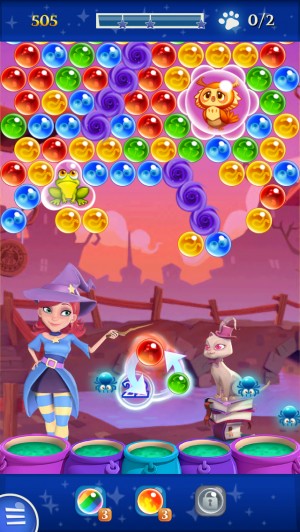 The original game was King’s first on iOS, and it’s pretty obvious these days. The assets are tiny and clearly not designed for iOS, and even though it’s a vertically-oriented game, it’s only playable in landscape. The art design in the game is absolutely awful, even by King’s standards, and there’s only one type of stage, which gets pretty monotonous in a hurry. Bubble Witch Saga 2 improves on all of those faults to a very impressive degree. It’s a much more vibrant game, and like stablemate Farm Heroes Saga, the art is actually fairly appealing, as opposed to the frankly ghastly work in older King games. The game is played in portrait mode, which makes a lot more sense for this type of play, allowing the field to be zoomed in a little more without compromising how far you can see ahead.

The controls have been changed a bit, too, and are more clearly designed with touchscreens in mind. Rather than having to press a button after aiming to shoot your bubble, you fire automatically as soon as you lift your finger from the screen. You still aim by sliding your finger around, but this time, the game targets wherever you’re touching as opposed to acting like the steering wheel of a boat. The line showing where your shot will go doesn’t extend quite as far as it did in the first game, but it does show ricochet directions without the use of a power-up. It’s a lot more intuitive and easy to play compared to the first game.

While the first game’s goal of reaching the top of the play area still makes up a large part of the game’s current 70 stages, there are a couple of new stage types to add some variety. In one type of stage straight out of the King playbook, a certain number of animals are caught up in the bubbles, and you need to free them by taking out the surrounding pieces. The other type of stage has you trying to rescue a ghost stuck in the center of a cluster of bubbles. Hitting the cluster will cause it to spin around, so part of the strategy here is in using your shots to expose the area you want to hit next. In all three stage types, you have a strictly limited number of shots to achieve your goal, though in usual King fashion, you can pay up to take a few more shots if you need them. 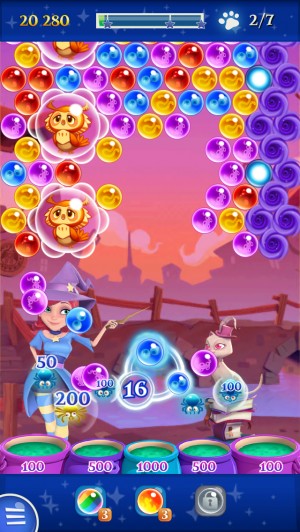 All of the other usual King monetization techniques are in play here, as well. There are power-ups that can help you clear a stage, but the game only gives you one taste for free. After that, if you want more, you have to use premium currency to buy them. You’ll also occasionally reach a gate where if you want to proceed, you have a choice of waiting for a ridiculously long time, bothering your friends on Facebook, or paying up some premium currency. You also have a set number of lives, and if you run out, you’ll either have to wait for them to be slowly restored or spend some premium currency refilling them. As ever, you don’t need to pay anything to play through the game if you’re persistent, but the game is definitely built to push you towards those IAPs. I’m actually kind of morbidly impressed at how King is able to design levels that you’ll either just barely clear or just barely fail.

Now, I’ve spent a lot of time with King’s various titles, for writing guides, helping out my family members, and just because I actually enjoy the challenge. In that time, I’ve never quite been able to figure out if the games massage your luck to manipulate the outcome. Since I’ve never been stuck on any one stage for all that long, I tend not to dwell on it very much. Luck is certainly a factor in Bubble Witch Saga 2, and while I’m no clearer on whether or not it’s intentional, the whole process is a bit less obscured here. In games like Candy Crush, you always feel like you could have made it if you had made better or different moves, regardless of how the pieces fall. Here, you can see all the possibilities open to you at any given time, and you sometimes don’t get the pieces of the colors needed to win. It’s like ten thousand blues when all you need is a red.

Still, like their other games, if you keep at it, you’ll make it through eventually. It’s just annoying to realize you’re in an unwinnable situation brought on by bad luck. It’s rare enough that it doesn’t kill the game, but it is sort of a black fly in the ointment, or Chardonnay. If you liked the first game, Bubble Witch Saga 2 is a no-brainer. It’s a considerably better game all-around, and really demonstrates how far King has come in many respects. It’s not a replacement for Bust-A-Move, but just think of it as some free extra modes you can fire up now and then for something a little different.