It is the future. The world is governed by a singular authority; a tough motorcylcle-riding all-female police squad named the SXPD. Dark and violent in nature, SXPD ($1.99) is reminiscent of comic series such as Tank Girl or Heavy Metal, perhaps, and is ideal for anyone who wishes to dive into the world of intense high speed chases, rapid gunfire and earth-shattering explosions.

My initial impressions? The visual style is very refined in its outstanding artwork, but I felt a slight disappointment in regards to content. Though comic book fans will indeed feel at home where the storyline and graphics are concerned (reminds me of a Sin City and Mad World hybrid), many newcomers to the concept will struggle. 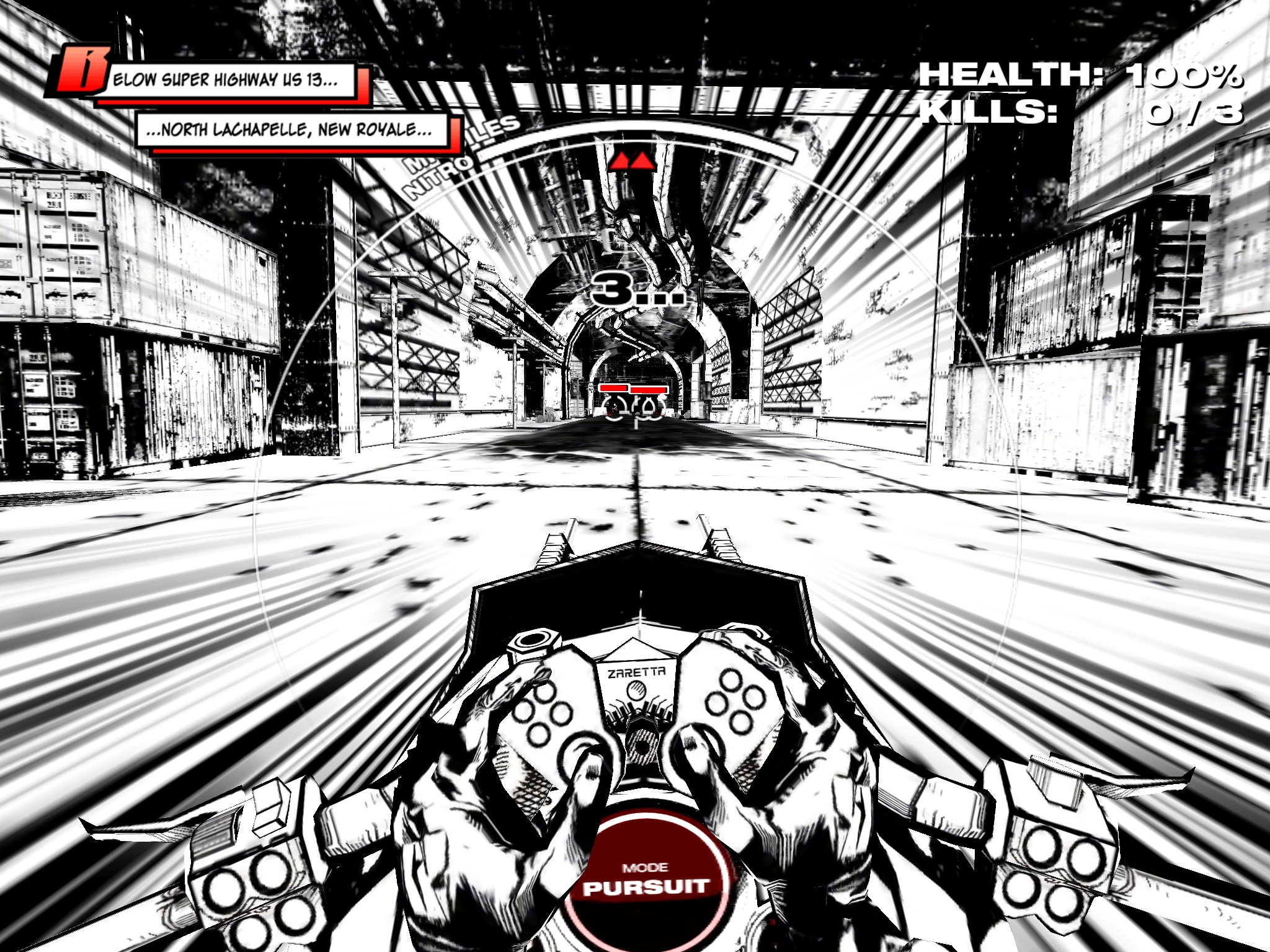 When you’re suddenly dropped into the interactive segments, you’ll find yourself zipping around a 3D monochromic world in first person view; your aim to destroy and take out all of the enemies in your line of sight and avoid colliding with obstacles as you do so. When all the enemies have been annihilated, the story will then advance. The combat is a mixture of nitro boosts and rockets, both of which feel somewhat added as an afterthought. I kind of felt these were more of a hindrance to the gameplay, considering activating the nitro whilst controlling the bike and avoiding crashing into obstacles became a bit of a struggle.

Due to the game’s fast pace and some very tricky tilt controls, I sometimes felt the gameplay was a little too out of control for my liking. There’s no control over the speed, so slowing your bike down is never an option, and due to its monochromic landscape, obstacles are not always easy to see and avoid.

The brief bursts of interactive gameplay fail to match up to its adrenaline-rush storyline, and the whole game is over before you know it. Overall, it’ll set you back around about an hour to complete, perhaps slightly more with the optional arcade challenges, but it still altogether feels like it’s lacking longevity. Sure, there’s obviously potential here to keep building up on the game with further instalments and it has a whole lot of promise, but there’s just not enough depth here to keep me invested further.

A lot of hard work has certainly been invested into SXPD and its with no doubt that this game has got a lot of clear potential, but due to its repetitive nature and lack of depth it unfortunately misses the mark just slightly. It goes without saying that the visuals were the forefront of the games ultimate selling point, but if the developers of SXPD want the game to reach other audiences, they may need to focus on offering a little more variety to their gameplay and a little less of the vogue.