I sat down to play Crobble (Free) this afternoon. An hour passed, and then my battery started dropping… first 20%, then all the way lower than 10%. It wasn’t until I was completely in the red before I figured it was time to put it down and start writing rather than playing. I’m pretty sure if I hadn’t had less than half a battery when I’d started, I’d still be hooked to it.

A game that blends the best aspects of Scrabble, and Tetris, you’ll lose yourself for countless hours as it continuously challenges both your vocabulary and reaction speeds at once. One of the most engaging and entertaining word-based puzzlers I’ve played this year, Crobble is timeless, intelligent, fiendishly good fun, and even better still, there’s no hidden in-app purchases once you unlock the full shebang. 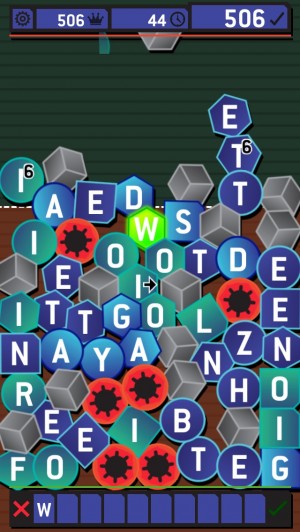 At a rather generous $1.99, you won’t be breaking the bank, but for those who prefer the idea of “trying before buying”, Crobble provides you the first ten levels of the arcade mode absolutely free. If there’s anything I can truly guarantee, it’s that Crobble will have sucked you in before you’ve even reached the halfway point. By the tenth level, you’ll be prompted to purchase and unlock the full game, but by this stage, you’ll probably be throwing your wallet at the screen.

Once unlocked, the game presents you three modes of play; Arcade mode, Blitz, and Zen. Varying greatly in difficulty and toughness, all three modes are easily just as accessible as each other, with both additional modes offering new fresh twists on gameplay. Arcade mode, by far my favorite, is a 100 level challenge that becomes exceedingly difficult as you progress. In Blitz mode, everything you’ve discovered and unlocked in Arcade mode comes into play in a frantic quick fire approach, which further challenges your reaction speeds as you advance. Catering for all, Zen mode is a laid-back, chilled-out, casual mode minus all the bells and whistles.

In all three modes, your goal is to tap on the letters to form words of three letters or more. When the word is submitted, the selected tiles disappear, creating further space for falling letters and earning precious points towards your level multiplier. At certain intervals, bomb tiles will descend, which allow you to explode the surrounding letters and renew your options. Bonus points can be accrued via the length multiplier and the modifier multiplier, which are earned by creating words four letters or more and incorporating a ‘numbered letter.’ 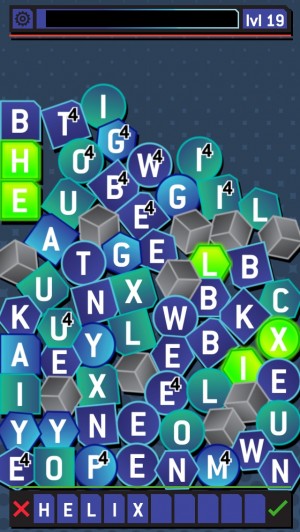 Each one of these numbered letters requires you to create a word with that exact amount of letters, but no two numbered letters can be mixed. (A letter with the number four cannot be mixed with a letter with the number five, and so forth.) Numbered letters can be used within larger or smaller words, but lose you any modifier multipliers at the same time. Each mode has its own tricks and tips that you will discover as you progress; for instance, some letters have arrows that only allow you to select an adjacent letter, or you can earn bonus multipliers by selecting the tiles in a highlighted circle.

When the tiles stack up to the top of the screen, it’s game over, but with no more than a quick tap you’ll be off and away again in no time. Should you fail, this game will only punish you by coercing you to carry on playing.

Issues with Crobble? Zero so far. My only suggestion would perhaps be to have an accessible list of the value or definition of each tile, as the quick-fire instructions that flashed upon my screen were something I too easily disregarded by accident. However, such a minor niggle is enough to be scoffed at, and you’ll probably be having far too much fun attempting to surpass your friends highest scores thanks to its handy social integration feature.

The game that should come with a warning label attached, Crobble takes a beautifully simple concept and mixes it up with some fantastic gameplay modes in order to provide players with one of the most enjoyably captivating games this summer.

My longest word is “intuitive” at 9 letters long. What’s yours?