Well, it’s not often I find myself having to write a second review, but here we are. A few months back, the hotly-anticipated sequel to Dungelot, surprisingly named Dungelot 2 (Free), was released on the App Store. While retaining the same basic gameplay as the original title, the sequel was quite different in a lot of ways, many of them owing to the new free-to-play structure. It was still pretty fun, but, as I said in an alternate timeline review, in most ways it represented a step back from the original game. It was also rife with bugs, including people losing out on purchased IAPs, which is basically a worst-case scenario. So, in a move that has very little precedent, developer Red Winter Software pulled the game from the App Store to rework it extensively and fix up the known issues. At last, it’s seemingly ready to go again, so let’s have a look and see how Dungelot 2-2 has turned out.

For those not familiar with Dungelot, it’s basically a simplified roguelike. It still maintains the core principles of that genre, with perma-death, random loot, and a basic structure built around finding the key to the exit on each floor, but it dispenses with things like massive winding mazes and moving your character around. When you die, you lose everything but your gold, which can be used to upgrade your character before tackling the dungeon over again. The actual floors of the dungeon are set on a single screen and divided into a grid of tiles. You simply touch a tile to see what’s behind it and deal with the consequences. Each time you enter the dungeon, everything is randomized again, but you go in a little stronger and a little wiser until eventually you can topple the thing. 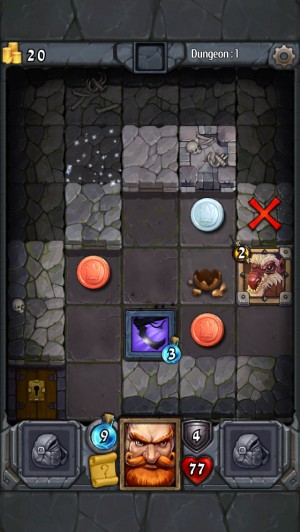 Dungelot 2 changes some things. First off, there’s a stamina meter, measured in ham. You’ll consume ham with each entry into the dungeon, and it replenishes slowly over time. If you’re really impatient, you can buy the golden ham via IAP, which completely eliminates the timer. With stamina meters being among the most hated type of monetization for the hardcore audience, it’s nice to see a developer put in a way for people to buy out of it. The refresh timer is really long, but so is each playthrough, so you’ll probably be fine with putting Dungelot 2 down well before you run out of ham in most cases. If you’re not, well, hey, you can buy golden ham, no foul.

The sequel also introduces a premium currency in addition to the returning standard currency, gold. Runes can be used to activate continue points and greedy doors, or revive when you die. They can be found very rarely in the dungeons, but not in any large quantities. Their presence violates a couple of the more important roguelike elements, and allow players to buy their way to victory. I’m not a big fan of these at all, especially the way they’re used with the continue points. Using a rune to activate one only allows you to use it once, making it something of a foolish throwaway of a rune even though the game could sorely benefit from permanent checkpoints. Unfortunately, you can’t buy your way out of the rune system with one simple purchase like the golden ham. At the very least, they’re no longer necessary for unlocking class skills, something that really bothered me in the original Dungelot 2.

Another big change is in the visuals. What were once cute little animated sprites are now more realistic-looking still images. I don’t think Dungelot 2 looks bad, but I preferred the charming look of the original game over the new generic fantasy vibe. The loss of the animated characters makes Dungelot 2 feel more visually sterile and boring. Your mileage will vary on that according to your tastes. The dungeons themselves look absolutely great, though, with a lot more detail and sharpness than in the first game. The music and sound effects haven’t changed much from the first game in style, but the quality of both has improved substantially. 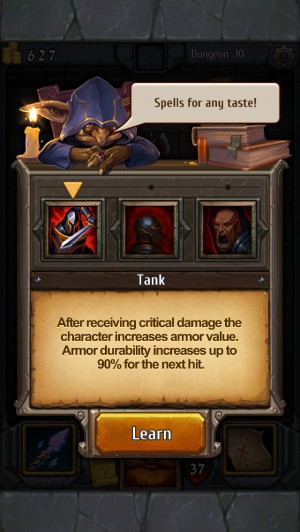 The first game at its heart was a gold-grinding game. Go in, survive as long as you can, gather all the gold you can, die, use the gold to beef up your abilities, and repeat. The sequel also puts a heavy emphasis on gathering gold, and in this new version of the game, it functions pretty closely to the first game. You can use gold outside of the dungeon to power up your character’s starting HP, armor, and mana, and these upgrades are permanent. Gold can also be used extensively in the dungeon for a variety of services, such as temporary boosts at the tavern, hiring mercenaries, and so on. You’ll need to spend your gold on temporary things sometimes if you want to make progress, but you’ll also want to save money for the lasting upgrades. It’s a nice balance, though the cost of upgrades scales kind of badly in the long term.

Still, the core gameplay is fun, and there are even a few strategic additions. On each floor, you need to find the monster carrying the key and kill it in a turn-based battle. The battles are probably the biggest change made to this new version, with the new system representing one of the more dramatic changes from the first Dungelot. In principle, every enemy now dies in one hit, but they go down swinging, hitting you for damage equal to their power. Some enemies have armor which affords them an extra hit, and they can also dodge, which spares their life but reduces their power. Plenty of enemies have the ability to come back from the dead as well. More than ever, surviving requires an emphasis on weakening the enemy’s first, and probably only, attack. Unfortunately for you, the designer seems to understand that, and so there are many ways the game will strengthen that same attack.

Along with many of the same tricks and traps returning from the first game, there are a variety of totems you can potentially uncover that will give the enemies a boost. You can remove these totems, but at a cost of some mana. If you break every single one you see, you’ll quickly run out of mana and really end up in a pinch if you run into an enemy that’s already plenty strong enough without a boost, so you really need to consider how much that totem needs removing before wasting precious mana on it. There are other traps and enemy enhancements that can be removed using your mana, as well, offering the enemies a variety of advantages. Making effective use of your mana is one of the keys to survival in Dungelot 2.

The end result is a slightly more difficult game than the first one, because you can’t really get away with just peeling away squares willy-nilly. Even if you save up your mana, you can’t really afford to remove all of the negative tiles you come across, but having two or more of them working their effects on you and the enemies at the same time can turn the tides against you in a hurry. You can’t count on consuming unwanted spells for an emergency boost of health as in the first game, either. In another major change for this version, spells aren’t carried with you, but instead work as special tiles you can activate using your mana. Of course, if you grind away at earning gold and upgrade diligently, you’ll eventually be strong enough to brute force your way past a lot of things.

Items, too, have seen a big change. Certain items can only be used in the current run, and you can carry two of these at any given time. If you find a third one, you can cycle between them until you have whichever two you’d like. These items typically have both a passive and an active effect, though the active effect will usually destroy the item. There’s another category of items, called spoils, that work as boosts for your next run. Simply collect them and they’ll automatically activate on your next attempt, giving you a bit of a leg up to help you bounce back from a loss.

I once again have to applaud the developer for their hard work in rebalancing Dungelot 2. The changes made have resulted in a far better experience than was originally offered. I think someone could play this without ever paying anything and have a great time doing so. That said, even in its new form, I still think Dungelot 2 is not quite the game the first one is. If you have a couple of bucks to spare, Dungelot is the way to go. For those who have exhausted that game, or those who aren’t keen to spend money, I can now at least say that Dungelot 2 is almost as good. Those are far kinder words than Alternate Timeline Shaun had to offer, I can say that much.