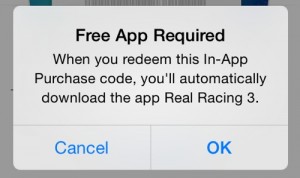 As pointed out by our pals at 148apps, EA and Firemonkeys are giving away $1.99 worth of gold for Real Racing 3 (Free). All you’ve got to do is mash this link on your iOS device. While 10 gold in RR3 is cool and all, what’s more interesting about this development is that it’s showing that developers can now give away promo codes for IAP items in games.

Previously, Apple didn’t have any method for developers to give away IAP items, which forced these really awkward gift card exchanges if a developer wanted to give someone IAP from their game. 148apps’ Jeff Scott goes in to detail with how the process works on his Twitter:

Basically, it works just like a normal promo code when you redeem it. If you don’t have the app installed that the IAP is for, you get a prompt telling you that by redeeming the IAP code you’ll also download the game. It’s unclear right now if these IAP promo codes are going to be for big developers only (like EA here) or if it’ll eventually be unrolled to all developers through iTunes Connect.

Hopefully everyone gets access to it before too long, as it’ll make the lives of developers who are looking to give their IAP items away for free to journalists, contest winnners, kickstarter backers or whatever else infinitely easier.